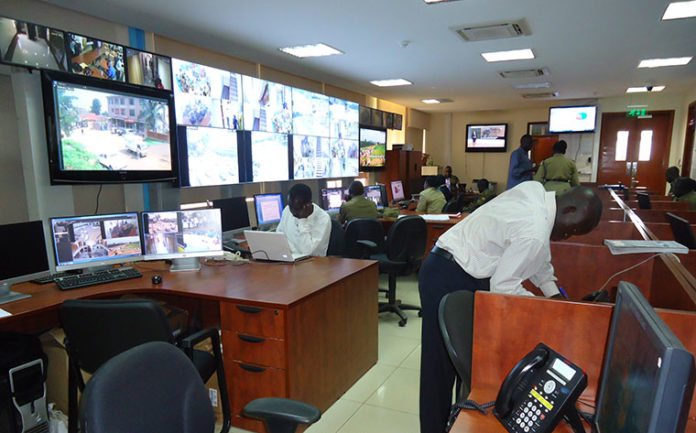 Given the recent exposures of crucial weaknesses in their security systems and encouraged by multinational corporations some African governments are turning to surveillance technologies and foreign military support to garrison their economic hubs against violent disturbances.

In March 2021, the international press was flush with coverage of Ahl al-Sunnah wa al Jamma’ah (ASWJ) after members of the group had undertaken a limited offensive in northern Mozambique. Coded as Islamist militants, about 200 rebels had captured the town of Palma, an economic hub for Total’s gas operations in the Afungi Peninsula, the site of Africa’s second largest gas reserve. Shortly thereafter, Total evacuated its complex, abandoned equipment and suspended plans to develop a US$20bn gas liquefaction plant. According to some estimates, 3,100 people have been killed and 820,000 displaced. Notwithstanding SADC’s mixed record of regional intervention, subsequently there were calls for their involvement, even suggestions of committing  military assets using the familiar rhetoric of ‘responsibility to protect’. In late June SADC approved a standby force, if needed. Still, the regional politics is fraught as SADC’s involvement could erode the legitimacy of the state more than that of the rebels 2000km away. Seemingly, the preference is for targeted military assistance from the US and EU. Indeed in December the previous year, EU parliamentarian Michael Gahler warned “the United States is trying to involve Mozambique in its anti-IS coalition.”

While there is debate whether ASWJ have a relationship with the Islamic State, the US Department of State has nevertheless labeled the group as ISIS-Mozambique. Such a framing is indicative of how counter-insurgency epistemologies perpetuate the conflicts in which they are applied. While it is not impossible that ASWJ may draw inspiration from conflicts abroad in the North Africa or Middle East, there are nevertheless many local drivers of the conflict, with resentment at economic marginalization of rural populations being a significant factor, especially in the wake of Cyclone Kenneth in 2019 and COVID-19 pandemic that started in 2020. A counter-insurgency approach will do little to address the foundational grievances of economic exclusion, poverty, and inequality; but it does reiterate that securitization of capital is an imperative.

Without more attention to these local factors, much of the South African and international media analysis “falls short of levels of precision” needed to account for the various layers of inequalities and resource conflicts that certainly predate Total’s enclave extractivism, but which Total’s arrival amplified. These key factors underscore the findings by Michael Watts, Ike Okonta, Dimieari Von Kemedi and their many collaborators in their decades long study of the political ecology of oil in the Niger delta and the rebellions spawned by the presence of multinational companies facilitated by governments which at best were fairly distant to ordinary people, but more typically pursued interests that were hostile to local populations. So instead of the partial frame of counter-terrorism advanced by SADC and the US government, well contextualised media reporting might improve the public understanding of the situation in Mozambique through framing it as, amongst others, the long-standing economic neglect of rural citizenry by central governments compounded by capitalist penetration of the extreme periphery. Among other factors, this penetration causes impoverishment through the destruction of livelihoods, like fishing communities in the Cabo Delgado province tapped for forced resettlement to make way for Total’s construction. But this sort of broader line of enquiry/explanation is complicated and harder to investigate because for example reporters visiting Mozambique’s north require the cooperation and protection of a media-hostile state and of local power brokers, including foreign armies. Altogether the reality of these working conditions narrows the prospect for holistic reporting, especially for journalists stationed in the region who have to have repeated encounters with state officials for other reporting.

One subtext in the subsequent regional and international press reports expressed astonishment at how Islamic fundamentalists had besieged the supposedly well-guarded oil complex, a symbol of capitalist ambition and power. Composed of global capital driving foreign direct investment and the local Mozambique political class, this complex’s anticipated operations in the Afungi Peninsula was positioned as a potent expression of the Africa Rising narrative. The project was not supposed to be attacked, let alone be abandoned due to a relatively minor rural rebellion so in effect the event exposed how the various weaknesses in the Mozambican state meant it was ill-equipped to secure capital on this occasion. Quickly questions were being asked. How and why had security forces failed to contain the attack? What kind of local group wished to eject businesses that could bring prosperity to their region? What is their plan, their agenda? Capital seldom experiences ambushes and defeats on this scale by opponents like these, in such dramatic fashion in front of the cameras, in this corner of Africa or in fact anywhere else on the globe. The question is now what kind of actions do states like Mozambique and others that face similar opponents take to secure a favorable business climate and preemptively contain threats against capital, or at least ensure they do not attract headlines and media attention that jeopardize share prices and major business plans.

While having important differences and proximate explanations, there are two other recent events that also speak to the evolving relationship between capital, the state, and securitization. The first, in June 2021 was an assassination attempt on General Wamala, a core member of Uganda’s National Resistance Movement government. The attack occurred outside his home, in a residential area of Kampala, by assassins on motorbikes. Wamala’s daughter and driver were killed. The events were captured on CCTV and shared by the state with the general public. Uganda has in the past few years witnessed a string of highly controversial and publicly debated high profile murders that included representatives of the state, parliament, and the Muslim community among the killed. Similarly, in July 2021 images of the storming of commercial centres and looting of shopping centres in South Africa invoked the need for greater institutional security, despite prominent warnings of an emerging South African security state. Again, there are unique contextual factors, but both cited events in Uganda and South Africa, were embarrassing, temporary defeats of already highly guarded, securitised socio-political orders. Accordingly, might the state and capital insist upon more CCTV, more security forces, and more classified budgets to deliver on the promise of security in insecure times?

Already there are signs of an escalation in securitization. In Uganda, the government spent US$126 million to purchase a 3,200 camera CCTV system from Huawei for Kampala. Nominally, this system is in response to a violent crime wave, the system forms part of Huawei’s Safe City initiative, which has been rolled out in more than 200 cities worldwide. Following cities like London which pioneered the introduction of mass CCTV systems in mid-1990s after the 1993 Bishopsgate bombing, this initiative has seen Chinese cities become some of the most-surveilled urban areas in the world (there are 2.6 million cameras in a city like Chongqing, Sichuan providing 168 cameras per 1,000 people). While citizens have a right to safety – and there are moral panics generated by a  surveillance culture especially in the West when Chinese companies are involved – arguably the deeper reason for this procurement is the securitization of capital and of capitalist class rule. After the latest attack on the minister, President Museveni announced plans to put a tracking system in every vehicle; in this case with the help of a Russian company. While politicians and activists have pushed back on these plans, these latest developments are consistent with the evolving character of neoliberal capitalism in Uganda and elsewhere in Africa.

There is a larger context to the coarticulation of massive wealth accumulation borne from capitalism and the militarised political economy which helps secure it. Uganda was regarded as emblematic of the dividends from adopting the neoliberal reform package. These reforms produced a restructuring in the late 1980s onwards as the National Resistance Movement came to power following the civil war. Beginning as a rebel movement formed to oppose authoritarian governments, the NRM and Yoweri Museveni’s government has been in power for more than 35 years. Through becoming the kind of polity they replaced, the NRM is intensifying surveillance practices to preserve aspects of ‘no-party democracy’ including controlling consent and dissent. The result is arguably a form of transactional citizenship for sections of society. Provided citizens do not aid political opponents, they will be kept safe. This exchange is offered in context of highly neoliberalised society where, as Achille Mbembe writes, the “privatization of public violence, the appropriation of means of livelihood, and the imaginations of the self” characterise everyday life.

As earlier neoliberal reforms set in motion changes in the order of Uganda, so it is probable that neoliberal securitization in the 2020s in tandem with discourses of national development will further shift what political actions are regarded as acceptable/unacceptable and whose views are subsequently coded against the axes of good/bad, legitimate/illegitimate, and right/wrong. If that is the case then the new surveillance system will prompt a revisiting of the classic question of “who is to be protected, by whom, against what and whom, and at what price?”, as Mbembe writes.

Returning to Mozambique’s north, the coincidence of the state’s embrace of enclave extractivism and retrenchment from governance in the north, has come at a high cost to residents already pressured by decades of underdevelopment and some of the most devastating climate change impacts on the planet. Humanitarian development aid to parts of Cabo Delgado has been stopped by the provincial government due to insurgent activity. Indeed, Joseph Hanlon, whose newsletter suggests deliberation in the displacement of local populations by insurgents, mercenaries, and the government, with each having something to gain. But this mediation would take place in a climate where some African states are keen to embrace foreign military intervention and more hi-tech militarised surveillance systems in accordance with modernist developmental models. While the details of each case matter considerably, there are some general conclusions to be drawn. First, making security enclaves will reshape the political space regardless of whether they are in urban or rural areas. Second, any restructuring is a conflict-ridden process with political outcomes rarely known beforehand. While these matters can still be contested, in the interim demilitarisation does not seem to be on the agenda because the institutionalisation of patterns around militarised ‘solutions’ and escalating foreign militarization with state and private variants providing further evidence of a colonial present consistent with the long history of violent capitalist accumulation on the continent.

Scott Timcke is a comparative historical sociologist who studies race, class, and technology in modernity. He is a research associate with the University of Johannesburg’s Centre for Social Change and a fellow at the University of Leeds’ Centre for African Studies where he studies the overlap between, algorithmic capitalism, FinTech and neocolonialism. His second book, Algorithms and The End of Politics was released in February 2021.

Jörg Wiegratz is a Lecturer in Political Economy of Global Development at the School of Politics and International Studies, University of Leeds, and Senior Research Associate, Department of Sociology, University of Johannesburg. His recent books include Uganda: The Dynamics of Neoliberal Transformation (co-edited with Giuliano Martiniello and Elisa Greco). He is a regular contributor to roape.net and a member of the Editorial Working Group.

Chris Paterson is Professor of Global Communication at the University of Leeds. His research focuses on revealing the unseen processes which create international news, and on analysing communicative processes which disadvantage the Global South. His co-edited book Africa’s Media Image in the 21st Century: From the “Heart of Darkness” to “Africa Rising“ was the first book in over twenty years to examine the international media’s coverage of sub-Saharan Africa.

Kenya and the rise of the financial inclusion delusion