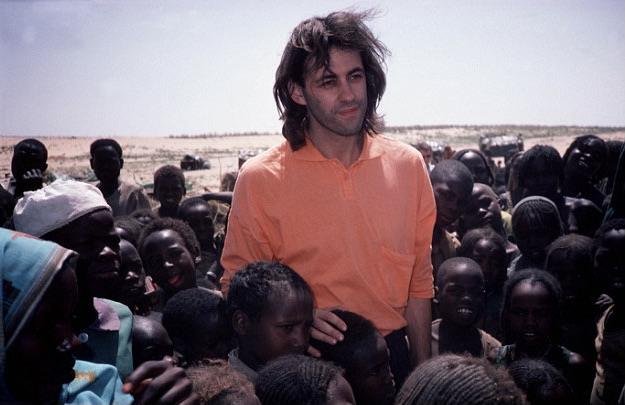 Reflecting on events in Ethiopia, Fisseha Fantahun Tefera argues that to understand famines we must go beyond a narrow, localized and simplistic understanding to look at how global structures foster conflicts that lead to famines. Tefera explains that colonial legacies and contemporary global power shape famine response operations, both by the states themselves and by the international aid industry.

The past two consecutive years Nobel peace prizes went to Prime Minister Abiy Ahmed of Ethiopia and the World Food Programme for settling a peace deal with neighbouring Eritrea and for fighting global hunger respectively. Now the two Nobel peace prize winners are confronted with a humanitarian crisis in the Tigray region of Ethiopia, that could potentially be the worst man-made famine in recent history. As the political crisis unfolds and the humanitarian disaster ensues, with a risk of imminent famine, history shows us that we have failed to learn the most important lessons about famines.

Famine casualties and mass starvation crimes going unprosecuted is a common thing. In fact, they have almost never been brought to trial anywhere, and even then, they assume a marginal space. This is usually attributed to a lack of explicit provisions in legal frameworks coupled with the complexity of factors causing famine. As many point fingers at the Ethiopian and Eritrean governments for what is happening currently in Tigray, there are lessons we can learn from Ethiopia’s own experiences in dealing with famines. Following the 1974 Wollo famine in northern Ethiopia during the Imperial period, a commission was set up to investigate the case. Even though the Emperor was deposed by the Dergue the same year, the commission was able to finalize its investigation that identified responsible governors, ministers, prime ministers, and other officials for the famine both individually and as a collective. These officials were later on, together with others, executed by the Dergue regime before they were brought to justice.

A decade later, the widely televised catastrophic 1984-85 famine killed close to one million people. Beyond claims that the Dergue regime is responsible for the famine, no one has yet been held accountable. The Special Prosecutor Office, set up after the 1991 transition, despite initial plans to investigate the famine, never brought any famine related case to court. With no significant political resistance from the totally collapsed former regime and with sufficient legal provisions available, this was a rare opportunity unused by the Tigray Peoples Liberation Front/Ethiopia Peoples’ Revolutionary Democratic Front (TPLF/EPRDF) led government. One explanation for this could be the relative ease of prosecuting the direct forms of violence like the Red Terror and war crimes, whereas, an investigation into the famine would raise unwanted attention (and culpability) to the role of other actors like TPLF, the US, and the UK that have used the famine and the aid operations for their own political, military and ideological interests. Both attempts at investigating crimes of mass starvation fall short of delivering justice to those who died and suffered due to man-made catastrophes.

Contrary to the simplistic, localized, and unethical framing and representation, famines are complex events and part of the local-regional-global political dynamics and structure. Even though droughts, socio-economic conditions, policy failures, armed conflicts etc create the conditions for famines, catastrophes of famines are actualized when there is a failure in response. As armed conflicts have become the leading vectors of famines especially since the 20th century, the local-regional-global political dynamics of these conflicts become an integral part of the causes, responses, and consequences of the famines.

The ongoing political crisis in Ethiopia that turned into an all-out open armed conflict between the federal government and Tigray’s TPLF since November last year is only a part of a broader political process that has been evolving during the past decade in particular and more broadly since the assumption of state power by the TPLF/EPRDF three decades ago. The conflict is also an integral part of the sub-regional Horn of Africa politics as countries advance their own interests including border conflicts, hydro politics, and more broadly with regard to the region’s strategic geopolitical position. The political crisis, the consequent humanitarian crisis and the imminent danger of famine need to be understood in light of these long durée of political processes in the country and the region, the various actors, and their complex constellation rather than a simplistic localized narrative.

Beyond the national level, historical and contemporary global political dynamics and structures shape the complex processes that result in famine casualties; both the conditions leading to famines and also the famine response. This is not unique to Ethiopia. Critically studying famines throughout Africa tells us a more revealing story. As armed conflicts become the leading factors that set the condition of famines, the much overseen yet still detrimental legacy of colonialism, among other things, in intra- and inter-state armed conflicts, is unavoidable. In addition, the various armed conflicts across the continent are shaped by the postcolonial global power structure that kept the continent in a subordinate position throughout the Cold War period, the War on Terrorism, the various development programmes etc. As well as  shaping armed conflicts that create the conditions for famines, colonial legacies and contemporary global power structures have shaped famine response operations, both by the states themselves and by the international aid industry. The infamous World Bank and IMF led structural adjustment programmes of the post-Cold War period are worth mentioning here. Agricultural liberalization under these programmes led to the selling of strategic grain reserves that left many African states (for example Malawi in the early 2000s) incapacitated to respond to famine situations.

The international aid industry plays a key role in famine response, the failure of which usually leads to catastrophic consequences. We have seen how the global power structure plays into this process in many cases, a very good example being the Ethiopia 1984-85 famine of which two aspects are particularly relevant here. The first is how the Cold War period shaped the civil war in Ethiopia between a USSR-friendly central government and rebel groups supported by Western countries attempting to topple the central government. While this armed conflict created the conditions for famine, the famine response operation is even more crucial. For instance, the then US-friendly Sudanese government received more food aid than Ethiopia to an extent that it affected the agriculture sector of the country. In Ethiopia, despite media coverage and public outrage, ‘donor countries made efforts to restrict aid to unambiguously humanitarian needs and, insofar as possible, to keep it out of the hands of the central government’. More directly, as now declassified documents have also shown, the policies of the US and UK governments were ‘…to use food shipments to starving Ethiopians as cover to ship arms and supplies to rebels…’ and to ‘…make life harder for the Ethiopian regime…’ in their bid to overthrow the socialist Dergue regime.

Much more recently, we have also seen how the US war on terrorism in Somalia and the EU’s role contributed to the 2011 famine as aid was cut and withheld from agencies operating in Al-Shabab controlled southern Somalia. Given the strategic geopolitical location of Ethiopia and the Horn region broadly, great powers rivalry, which has seen increased competition recently, is an integral part of armed conflicts. Global powers(particularly US-China) military competition in the region coupled with Middle East countries (like Qatar, Saudi Arabia and UAE) competition to intervene in various political processes in the region were highly visible recently. The hydro politics tension between Ethiopia-Sudan-Egypt over a dam project in Ethiopia is also another piece of the puzzle in the political instability we have seen in the region recently. The push for accountability for famines must go beyond a narrow, localized and simplistic understanding to look at how other actors and global structures foster and respond to conflicts that lead to famines.

Reminiscent to the 1980s, pictures of emasculated, wounded, and dead bodies are once again circulating. In the social media age when it is easy and convenient to access and distribute images and stories of humanitarian catastrophes, ethical concerns become paramount. Among others, aid agencies, media outlets, political groups, and activists, including in the diaspora, rely on and use stories and images of those suffering and dying to mobilize resources and support. Yet as we have seen from the past, those who suffer are portrayed unethically, a representation that becomes fixed, and helps to construct and reinforce stereotypes. The 1984-85 famine of Ethiopia and the subsequent Band Aid that ushered in ‘celebrity humanitarianism’ are classic examples of the un/ethics of images, stories and representations of victims of famines in Africa. Through these processes, already existing stereotypes that are fundamentally ‘simplistic, reductionist, colonial and even racist’, are reinforced and reproduced. That in turn also lends to the simplistic and localized framing and definition of accountability and responsibility to famine casualties.

Ethical concerns are not only discursive, they translate to practical consequences. As elsewhere in Africa, the Ethiopian political crisis has attracted international ‘experts.’ Some of these international experts and journalists continue to be the subject of social media controversy. Their continued analysis and reporting of the political crisis have been used by different actors as an ‘expertise’, ‘unbiased’, ‘neutral’ validation of their side, and invalidation of the other. Unfortunately, the existing global order also affords these ‘experts’, particularly those from the West the position of being heard by and to influence international organizations, Western countries, and the media. This often amounts to ‘experts’ actually shaping and influencing the politics of a country they are not a part of and the consequences of which they are immune from. In Ethiopia, for example, it is particularly alarming given the highly sensitive and complex ethnic identity politics (where at least advocates of the three politically dominant ethnic groups are currently accusing each other of ‘ethnic cleansing’ and ‘genocide’). Western ‘experts’ analysis, reporting, and social media engagement, is frequently oblivious to the nuances and complexities of these factors.

Over time, we have seen a growing understanding of famines as man-made political, criminal acts that are legally prosecutable. The UN resolution 2417 of 2018 ‘condemning the starving of civilians as a method of warfare’ is one major milestone. This growing understanding carries with it the challenging task of identifying responsibility and establishing accountability. Given the complexity of the political crisis, with multiple actors from local to global level, it might take time before we know the full extent of responsibility of actors for the current catastrophe happening in Ethiopia. Another very important lesson we can learn from past famines and related political violence in Ethiopia is the need to be aware of and the real, practical dangers of unethical representation, analysis, and reporting. Sadly, it is not only in terms of legal accountability that we need to learn from the past. While we have museums, monuments, associations, and other forms of memorialization for victims of spectacular forms of political violence like wars and the Red Terror period, the victims of the 1984-85 famine and other historical famines are left ‘forgotten’.

Fisseha Fantahun Tefera is a PhD candidate in Peace and Development at the School of Global Studies, University of Gothenburg. He is currently working within the research project ‘Famines as Mass Atrocities: Reconsidering Violence, Memory and Justice in Relation to Hunger’. His research interests include politics of development, transitional justice, and memory politics in Africa through a critical, Africanist approach. He has a background in Development Studies (MSc) from Lund University and in Political Science and International Relations (BA) from Addis Ababa University.

Featured Photograph: Bob Geldof as the white saviour during the Ethiopian famine in 1984-5.