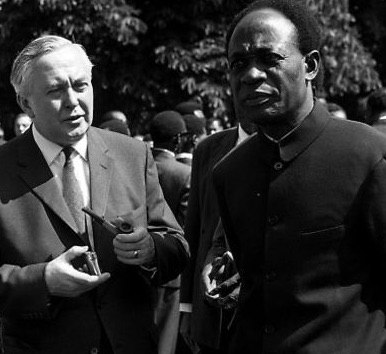 More than half a century after Kwame Nkrumah first articulated his magisterial critique of neocolonialism, Scott Timcke argues his critique remains just as relevant in the analysis of present-day developments of capitalism in Africa.

The present convergence of finance and wireless technology has generated considerable enthusiasm in development circles about the promise of connectivity and FinTech to improve quality of life and create wealth on the African continent. The prototypical example that proponents point to is M-Pesa, a service run in Kenya by Safaricom. Launched in 2007, M-Pesa is a form of mobile banking which uses cellphone accounts as a financial service, permitting transfers and credit extension facilities. Initially funded by the United Kingdom’s Department for International Development (DFID), the service was commercialized through a joint venture by Vodafone and Safaricom. By 2018 there were 30 million customers and 6 billion yearly transactions. By most assessments, the service is a success. This blogpost revisits that conclusion by asking how these kinds of FinTech technologies, in their current configuration, perpetuate neocolonial relations. Replacing direct military rule, neocolonial relations can be understood as the coordinated exploitation of developing countries by advanced capitalist ones through their clout in international political economy. If such a claim at first appears like a stretch because it appears conspiratorial, it is worth recalling how European imperial and colonial practices were naturalized and normalized for most of modernity.

While ‘the methods of neo-colonialists are subtle and varied’ let us begin with the obvious. Desires to ‘bring Africa online’ in the 2000s had to confront stark realities born from both (i) the legacies of colonial infrastructure planned primarily to support resource extraction or settler communities, and (ii) the IMF imposed structural adjustment policies that slashed state maintenance budgets and social, economic, and political infrastructure. So, when digital neo-modernization advocates maintained that without access to the internet people in the Global South would face a digital divide which would exacerbate poverty that stemmed from the already asymmetrical relations in the global system, they overlooked the very history that gave rise to those inequalities and deficiencies in the first place. But this rhetoric of digital inclusion tended to overlook the historical materialist method at the heart of discussions about digital inequalities. Indeed the ‘connectivity paradigm’ currently promoted by the World Economic Forum and Facebook focuses on building infrastructure to create markets and customers, which will bridge the digital divide. However, this conceptualization ignores the insights of the scholarship around uneven and combined development or the research on the spatial fix required by capitalism to stall social problems in metropoles. In other words, for all the discussion about connectivity when digital neo-modernizers deny the connections of history; they deny how some polities are rich because others are poor.

Take the case of rising household over-indebtedness mediated by micro-lending platforms like M-Pesa. Sociological studies of the working-class in Kenya, like that by Kevin Donovan and Emma Park, demonstrate how these digitally mediated financial markets create debt traps for this class. In effect their earnings are used to pay off debts and more loans are taken against future earnings to service existing debts. This digitally mediated indebtedness of the working class is facilitated by the combination of the increase in the volume of rents extracted in the modern financial economy as well as, crucially, analysis of user generated data to assess their creditworthiness. In short, social reproduction is articulated through the logic of this financial system in turn causing severe maldistribution. Through this employment of FinTech ‘poverty is understood as a new frontier for profit-making and accumulation.’ These are the kinds of processes that Dan Kotliar and Abeba Birhane have in mind when they write about data orientalism and the algorithmic colonization of Africa respectively.

While the excellent critical literature on FinTech in Africa is growing, too often this work is lost in the analytical (and political) noise of neo-modernization. As the connectivity paradigm illustrates, this ideology has a naïve comprehension of technology as a social form. By contrast, when approached from a critical perspective, FinTech is not confined to reconfiguring or extending new services. Rather it involves creating new markets, introducing new machinery to reduce labor costs and more generally aiding inter-sector competition. But most importantly, FinTech is concerned with enclosing and capturing the value in existing informal lending practices the African working class has already built themselves. For example, South African informal saving networks are estimated to hold US$3 billion. To put it another way, the purpose of FinTech is to readjust the balance of power between capital and labor. This means that the central issue is not about the outcomes this technology produces, nor is it even a matter of access. The fundamental question is about how control rights of this technology reside with a minority of shareholders and how their interests are adjacent to the interests of their firms’ customers. And through indebtedness, FinTech is effectively creating a ‘digital-creditor-debtor-divide’ in Africa.

There is considerable value in revisiting Kwame Nkrumah’s Neo-Colonialism, the Last Stage of Imperialism to understand the neocolonial components of algorithmic capitalism (informational or cybernetic capitalism). Published in 1965 and written in the wake of British Prime Minister Harold Macmillan’s 1960s Wind of Change speech in the Parliament of South Africa in which the Conservative British government signaled that is would no longer actively oppose independence movements, neocolonialism as Nkrumah described it, was a technique of indirect rule kept in place through a combination of economic arrangements and treaties, innovations in communication technology, and with the assistance of local sympathetic agents. In short, Nkrumah argued that European politicians like Macmillan and Charles de Gaulle offered disingenuous statements about the formal end of colonial rule, in part because newer mechanisms of colonial exploitation were possible to implement.

As a quick illustration of the durability of neocolonialism as a form of imperial rule, consider how, sixty years after formal political independence, the CFA franc has kept former French colonies under the influence of France monetary policy and structuring the economic relationship between France and these former colonies. Fanny Pigeaud and Ndongo Samba Sylla’s recently published Africa’s Last Colonial Currency concretely shows how 162 million people in 15 states have France mediate their monetary policy. When paired with the frequent military interventions that still take place, as Nkrumah accounted for, African populations continue to be subjects of scientific and financial experimentation by global powers.

Even reviewing Nkrumah’s sequence of chapters gives an early indication of the larger argumentation and stakes of his thesis. “Exercised through economic or monetary means” and “by a consortium of financial interests” imperialist finance and its currencies enable capitalists to establish corporations dedicated to extracting raw materials from concessions. By pressing labor—whose wages are artificially depressed through monopoly in economic sectors and the monopsony of labor (a market situation in which there is only one buyer) like in many African extractive economies—the profits of which are repatriated to metropoles through monetary zones and foreign banks. Indeed, at the time the book even caught the eye of the CIA in November of 1965. Nkrumah’s government would not last even four more months. It was deposed in February 1966 by a military coup. While it is difficult to adequately discuss Ghanaian politics in the 1960s in this venue (and more generally we must resist mono-causal explanations) it is nevertheless telling that Nkrumah’s removal set in motion a ‘diplomatic realignment’ that benefited the West.

Indeed, it is this kind of protracted material struggle between oppressor and oppressed that gave rise to the neocolonial critique. In the 1989 edition of The Black Jacobins, CLR James included an appendix ‘From Toussaint L’Ouverture to Fidel Castro’ in which he writes that about the intellectual encounter between the West Indians like Marcus Garvey and George Padmore and Africans like Jomo Kenyatta and Kwame Nkrumah. Calling this “one of the strangest stories in any period of history”, James described how encounters between sets of migrants in European cities led to the formation of groups like the International African Service Bureau, as Theo Williams has previously discussed on roape.net. Being in metropoles these Pan-Africanists had front row seats to witness the transition from ‘the old colonial system’  that had stood since the 1884-1885 Berlin Conference to ‘neocolonialism’ that emerged after World War Two. Through their ‘criticism of the weapon’—to employ a line from Marx’s Critique of Hegel’s Philosophy of Right—the Pan-Africans made their theory ‘a material force.’

While there are several tendencies in African studies, neocolonialism and neo-modernization represent two divergent conceptualizations of actions occurring on the continent. Despite protestations otherwise, neo-modernization is institutionally, philanthropically, and academically entrenched. It provides the initial frame of reference for design of empirical studies. And it is precisely “because they have already established a near monopoly of what is written on the subject” to enroll some of Walter Rodney’s remarks, that space is made for the neocolonial critique. This critique can, for example, show how local intermediaries facilitate neocolonial rule. Walter Rodney called these local agents’ allegiance to, or cynical cooperation with neocolonial powers, part of the ‘elementary conditions’ of neocolonial rule. For example, as it applies to algorithmic capitalism, the Kenyan government owns 35% of Safaricom. This means that the state gains revenues from the indebtedness of its citizens and the commodification of their data that Donovan and Park describe. But here arises a contradiction, because these revenues may be offset by costs spent to address the social consequences of indebtedness like homeless and mental illness. Indeed, depending upon their mandate, parts of the Kenyan bureaucracy are likely working at cross purposes from one another. This adds conflicting interests to any intra-governmental discussions on how (or if) to regulate lending apps like M-Pesa.

To recap, aside from the skews and parameters that arise from internal properties, it is true that there is nothing intrinsically exploitative about digital technology. That said, due to the global supremacy of the private property regime, the meaning and operation of these digital infrastructures is overdetermined by capitalist values. Accordingly, using neocolonialism in studies of digital sociology can help us focus less on the mechanisms of this or that platform, and more on how platforms are part of the basic forms of a society that shape social relations. In this vein, neocolonialism provides a different methodology—a counter-narrative that foregrounds the experience of the oppressed—that comes to vastly different conclusions to the neo-modernization perpetuated in the elite ‘fintech-philanthropy-development complex’.

This complex promotes platforms to advance economic liberalization and skirting existing regulations believing that such policy courses can nominally improve material conditions for Africans. However, in practice due to platform mediated financialization setting up conditions of perpetual insolvency, the lived-experience of the African working class is delimited by the interests of metropolitan capital, an arrangement that is reminiscent of the same kinds of subordination that Nkrumah described in the latter half of the 20th century. Much like in the 20th century this most recent iteration of neocolonialism will have long reverberations.

Scott Timcke is a comparative historical sociologist who studies race, class, and technology in modernity. He is a research associate with the University of Johannesburg’s Centre for Social Change and a fellow at the University of Leeds’ Centre for African Studies where he studies the overlap between, algorithmic capitalism, FinTech and neocolonialism. His second book, Algorithms and The End of Politics (Bristol University Press) was released in February 2021.