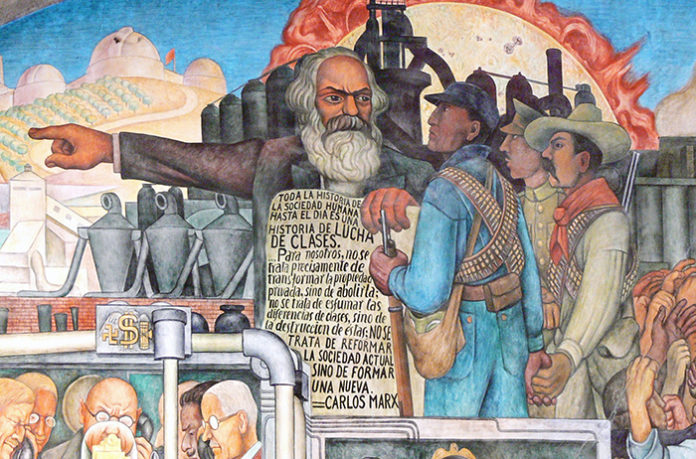 ROAPE’s Bettina Engels reviews a new Handbook of Marxism and Post-Marxism which, she argues, presents a variety of important Marxist thinkers and successfully demonstrates the wide range of theoretical approaches of those who have engaged with Marxism.

The number of publications under the label of Post-Marxism, Post-Foundationalism, Post-Capitalism and Post-Politics has considerably increased during the last decade, including several edited volumes. What clearly distinguishes this handbook from most of these other publications is that it refers to Marxism and Post-Marxism and presents classical Marxist writers such as Marx and Engels themselves, Luxemburg, Kautsky and others, in one compilation with contemporary prominent Marxist scholars such as Samir Amin, Ernesto Laclau and Chantal Mouffe, and David Harvey. By doing so, it eventually made me understand what ‘Post-Marxism’ as a label means. Post-Marxisms, as the editors define it, is a “theoretical and political framework that simultaneously is itself influenced by Marxisms but seeks to go decisively beyond it” (p. 1).

Yet, the prefix ‘Post’, seems somehow confusing, as it suggests some kind of chronology, that Marxism was ‘over’ or completed and now we were in the Post-Marxist era. Of course, neither the editors nor authors who consider themselves Post-Marxists in general affirm this, but the term still suggests it. So maybe ‘Marxism +’  would be a more appropriate label.

Post-Marxism as a ‘self-adopted label’ came up in the 1980s “to characterize a particular means of escape from the widely proclaimed ‘crisis of Marxism’ that followed the decline of the 1960s radical movements” (p. 1). Still, it remains somehow vague to me what exactly characterises ‘Post-Marxism’ — for example, would we label Michel Foucault, Gayatri Spivak and David Harvey as ‘Marxists’ or ‘Post-Marxists’? Nor is self-identification the only criterion – at least to be included in the handbook. According to Terrell Carver, the author of the chapter on Judith Butler, Butler herself “does not identify as a Marxist or Post-Marxist” (p. 435).

The volume is structure in nine parts, most of them starting with a longer general chapter followed by shorter pieces on individual thinkers (45, altogether) and three on specific topics (on ‘African Settler Societies’, ‘Ecological Marxism’, and ‘Covid-19’). The editors outline that they are aware of the problem of selecting some names and excluding many others. With that said, it might have been an alternative to focus less on individual figures and ‘big names’ and more on debates, controversies, and topics, which would have possibly shifted the focus from thinkers and writers slightly more towards Marxist political practices and class struggles.

Notwithstanding, many chapters – brilliant pieces by ROAPE’s Leo Zeilig on Frantz Fanon and by Marcel van der Linden on Immanuel Wallerstein, for example – succeed to present the life of the respective thinker and at the same time core concepts and debates in Marxism, such as class consciousness and class struggle (Wallerstein), the role of the peasantry in revolutionary struggles (Fanon), and the relationship of capitalism and imperialism (in the chapter on Samir Amin by Yousuf Al-Bulushi).

The order of the volume is more or less chronological. Unsurprisingly, it starts with a chapter each on Marx and Engels. Part 2 is dedicated to the era of the Second International, the ‘Age of Imperialism’, presenting chapters on Rosa Luxemburg and Karl Kautsky. This is followed by a section on the era of the Russian Revolution, with contributions on Trotsky, Gramsci, and Benjamin, among others. After these chronological parts, part 4 of the handbook, under the heading ‘Tricontinental’, pools ‘Marxism outside Europe’ (the title of the conceptual chapter by Vijay Prashad that introduces the section): Vladimir I. Lenin, James Connolly, José Carlos Mariátegui, Mao Zedong, C.L.R. James, Frantz Fanon, and a chapter by Allison Drew on ‘Marxist Theory in African Settler Societies’.

This might, at a first glance, suggest a dichotomy of ‘Europe and beyond’, or ‘The West and the rest’ (as Stuart Hall has put it). However, the following sections of the handbook also include chapters on authors from various parts of the world and with various identities, though still the clear majority are men from Europe and North America.

In view of how much have already been written on Sartre, Gramsci, and Poulantzas, for example, and of course on Marx and Engels themselves, Trotsky and Lenin, many readers might have benefited more from chapters on Steve Biko, Amílcar Cabral, Kwame Nkrumah, Julius Nyerere, Claudia Jones, Thomas Sankara, Walter Rodney or others. Moreover, these were all thinkers, writers, and political activists at the same time, they also have lots to say about political practice, about modern class struggles and national (liberation) politics. The historical experiences and theoretical thinking of these activists cannot be substituted from reading contemporary writers from Europe and North America, whether or not they identify as Marxists or Post-Marxists. I am unable to provide examples of Marxist writers and activists from Latin America, Asia, and the ‘Arab world’, as I am myself unfamiliar with Marxist debates and activities in these world regions. So, I would have enthusiastically read such chapters (rather than one on Habermas, for example).

Part 5, ‘Renewal and Dispersal’, deals with the 1960s and 1970s, namely with Sartre, Althusser, Hobsbawm, Poulantzas, Wallerstein, Amin, and others. Parts 6 (‘Beyond Marxism?’), 7 (‘Unexplored Territories’) and 8 (‘Hidden Abode’) present a variety of important contemporary Marxist thinkers and successfully demonstrates the wide range of theoretical approaches and the analytical focus of those engaging with Marxism: from Laclau and Mouffe, Negri and Badiou (all in the section titled ‘Beyond Marxism?’) and radical economists such as Henryk Grossmann and Kozo Uno (‘Hidden Abode’) to Marxist political ecology and feminism.

I am not sure whether I find it felicitous to subsume postcolonial (Stuart Hall), ecological and feminist thinkers (Butler, Mohanty) under ‘Unexplored Territories’. These may be indeed fields of thinking and analysis that are somehow at the margins of Marxism, however, they are far from being ‘unexplored’, and I would be more cautious to use territorial notions referring to postcolonial and feminist theory, given the ambivalence of the term and the debates on it in both theoretical fields. Part 9, ‘Marxism in an Age of Catastrophe’, contains a single chapter by John Bellamy Foster and Intan Suwandi on Covid-19.

The book presents an invaluable resource particularly for teaching, in Political Economy and in Critical Political Theory in general. Already the introductory chapter provides an excellent, encompassing and thorough overview and genealogy of Marxist theoretical debates. The editors have accomplished an impressive work in compiling a comprehensive collection of chapters by inspiring young contributors alongside some of the most experienced Marxist authors, who could have equally deserved being the subject instead of the authors of chapters!

With so many profound and nuanced contributions, the compilation succeeds in presenting the variety and range of classic and contemporary Marxist thinkers, but at the same time maintaining a clear focus and not randomly offering any critical perspective as ‘Marxist’. It is left to readers now to decide whether or not ‘Post-Marxism’ presents an appropriate label, academically or politically. In any case, the volume provides a promising starting point for this discussion.

Bettina Engels teaches at the Department of Political and Social Sciences, Freie Universität Berlin, in Berlin. Bettina is an editor of ROAPE.