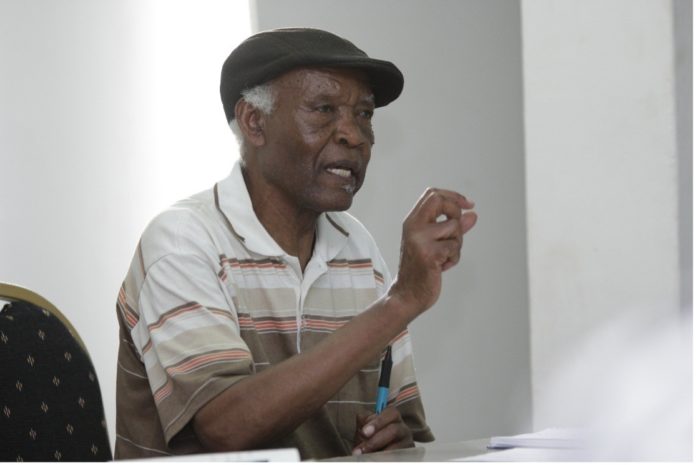 Written 25 years ago, Kenya: A Prison Notebook inspired generations and proved a great resource and a handbook in political education in Kenya and beyond. It chronicles Maina wa Kinyatti’s arrest and detention by the Moi regime, and powerfully captures Kenya’s history. From a new collection on the book, Sungu Oyoo introduces a celebration of Kinyatti’s work by young activists and Gacheke Gachihi writes how his life was transformed by meeting Maina wa Kinyatti – the full text of the collection is available at the end of the blogpost.

Maina wa Kinyatti was a university professor and foremost researcher on the Mau Mau (Kenya Land and freedom Army), the liberation movement that engaged the British colonialists in armed struggle for land and freedom. In 1982, he was arrested by state agents for ‘possession of seditious material’ and detained by the Moi regime. Maina wrote Kenya: A Prison Notebook over the course of the next six and half years he spent in detention – mostly in solitary confinement.

Maina’s work and writing remains a constant and painful reminder that the objectives of the freedom struggle the Mau Mau engaged in are yet to be achieved. Kenya is a neo-colonial state. Her economy is in the hands of global capital and imperialism, while constitutionally guaranteed rights and freedoms are everyday blatantly disregarded with impunity.

Maina’s generation continued with the struggle for a better society and showed great courage by confronting a regime that was prepared to go to any lengths to suppress dissenting voices. Today, another generation is continuing with that struggle in fulfillment of its historical responsibility.

Through this collection of reflections on Kenya: A Prison Notebook, young comrades from various movements and organizations interrogate the lived reality and material conditions of their generation whilst relating them to past struggles and experiences. They reflect on a range of themes; including the purpose of education as a tool for liberation or bondage; the unfinished task of national liberation; intergenerational inheritance of social struggles in Kenya; not forgetting the pain, courage, patriotism and organizing reflected in the book.

These reflections are a celebration of Maina wa Kinyatti and all those who engaged in struggles for a better Kenya and Afrika. They additionally are an urgent reminder of the need to organize more than ever given the lived reality and material conditions of our people – those living in deprivation, those whose rights are suppressed, and freedoms infringed. They are a reminder that struggle, like change, is a constant. These reflections were inspired by a conversation at Ukombozi Library between Gacheke Gachihi, Nicholas Mwangi and Brian Mathenge.

“9 June 1982: After refusing to sign a written confession statement, I was given back my clothes, blindfolded, handcuffed and taken to the CID headquarters where I was physically abused, photographed, fingerprinted and charged with possession of a seditious publications entitled Moi’s Divisive Tactics Exposed, a document the Police had planted in one of my research files” Prof. Maina wa Kinyatti.

25 Years ago, Professor Maina wa Kinyatti wrote Kenya: A Prison Notebook, borrowing from the narrative of the great revolutionary and organic intellectual Antonio Gramsci, a political prisoner during the fascist dictatorship of Benito Mussolini in Italy during a period when Europe was undergoing a capitalist-imperialist crisis of fascism.

Maina wa Kinyatti, a revolutionary and freedom fighter, spent 6 years in Prison primarily for writing Kenya’s correct history and for being a member of the Mwakenya December Twelve Movement (DTM) movement (an underground socialist movement in Kenya in the 1980s) that fought for democracy and social justice in Kenya during the Kenyatta–Moi dictatorships. In blood and tears, he wrote one of the most beautiful and glorious chapters of the history of our resistance as a people – a history of constant struggle in defense of democracy and our collective memory, dignity and social justice.

Published 25 years ago, Kenya: A Prison Notebook remains relevant and continues to inspire new generations of freedom fighters, students, peasants, and social justice activists. It has sparked a re-imagination of political education and provided the social justice movement with great insights into the true history of resistance in Kenya, including lessons learnt during the struggles of Kenya’s underground movement, popularly known as Mwakenya. 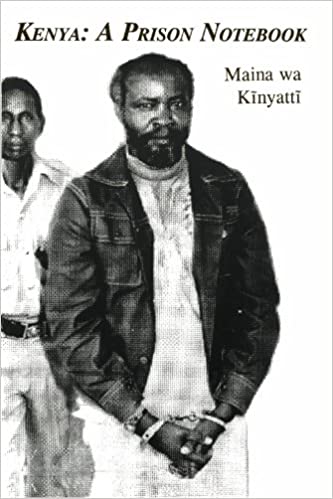 It was in 2003 when, through Tirop Kitur, I got a copy of Kenya: A Prison Notebook from the then Release Political Prisoners (RPP) offices along Nairobi’s historic Cabral Street. RPP was a political organization started by mothers of political prisoners and Kenyan exiled communities in London agitating for democracy and the release of all political prisoners in Kenya. Comrade Tirop had been one of the Mwakenya detainees and was a political activist alongside Karimi Nduthu – first RPP coordinator, a great revolutionary and urban guerrilla assassinated by the Moi regime in 1996. Karimi Nduthu was at the time of his assassination creating a political path for the mass movement anchored on the struggles and human rights work that RPP was engaged in. Indeed, the seeds for today’s grassroots social movements in Kenya emerged from the struggles of RPP and the Mwakenya movement – just as the seeds of RPP and Mwakenya had emerged from the struggles that preceded them.

The book opened my eyes to Kenya’s beautiful history of struggle, especially the resistance by ordinary people against the British imperialist backed Moi dictatorship. It sparked my anger and passion against injustices and human rights violations. It exposed me to the evils of the Moi regime, the blood that was shed and the price paid by many university intellectuals, workers and peasants during the struggle for democratic rights, including the freedom to organize and protest. It is through continuous organizing and protests such as the Saba Saba March in 1990 among other political activities that Moi’s 24-year-old dictatorship was removed from power in 2002.

The book became one of my best pieces of history and an authoritative reference on Kenyan struggle and resistance and has inspired me into buying copies for my comrades as part of political education.

True to its nature, the neocolonial state firmly opposed any political organizing and research on the Mau Mau Movement that Maina Wa Kinyatti was bringing to light to educate the Kenya masses on our true history. Maina Wa Kinyatti was one of the senior cadres of the DTM that was organized by progressive university intellectuals, political activists and workers. The movement showed great courage by organizing during the Moi regime, including in Kenyatta University where it conducted underground political study cells.

Due to fear of change and resistance the regime embarked on a mission to cleanse radicals and Marxist professors from Kenya Universities, destroying the culture of education and hitherto vibrant battle of ideas in university spaces. In the universities and other public spaces, the state removed progressive books by Karl Marx, Ngugi Wa Thiongo, Steve Biko, Malcom X and any material that challenged the neo-colonial state and British imperialism in Kenya.

During Moi’s reign, marked by ethnic mobilization and backward politics, university education in Kenya took a nosedive, destroying the foundation of generational values and a culture of patriotism that liberation movements such as the Mau Mau had inspired. Moism took Kenya down the path of economic destruction and neocolonial poverty and entrenched divisive ethnic politics that is at the core of Kenya’s political mess today.

Maina wa Kinyatti was arrested and sentenced to six and a half years in prison for ‘possessing seditious material’. The Imprisonment of Maina Wakinyatii, Ewdard Oyugi, Kamonji Wachira, Katama Mkangi, Willy Mutunga, Ngugi wa Thiongo, and many others derailed the growth of an ideological political base in Kenya for progressive politics and the social justice movement.

I first met Maina wa Kinyatti in 2000 and much later, we began organizing political study sessions at the Polytechnic Institute in Nairobi as part of introducing us to class struggle and the history of resistance in Kenya. Subsequent study sessions forged our comradeship and led to an opportunity to launch one of his books, History of Resistance in Kenya in 2008. Maina Wa Kinyatti and his wife Mumbi Maina have since then become my teachers on love for our people and the struggle for liberation in Kenya and Africa.

As we mark 25 years of Kenya: A Prison Notebook we celebrate comrade Prof. Maina wa Kinyatti as a great freedom fighter, revolutionary intellectual and a mentor to our generation’s struggle for freedom and social justice.

As the Czech writer Milan Kundera once said, “The struggle of people against power is the struggle of memory against forgetting”. Prison Notebook is an epoch of memory that we will never forget. An epoch of history that will continue sparking fire against injustice across many generations in Kenya. It’s a permanent spark of our fire of resistance, love of our country and a memory of the sacrifices of comrades of the Mwakenya-Decemeber Twelve Movement.

The book 25 Years of Kenya – A Prison Notebook: Reflections can be downloaded and read for free here.

Gacheke Gachihi  is the coordinator of Mathare Social Justice Centre (MSJC) and a member of the Social Justice Centres Working Group Steering Committee in Nairobi, Kenya. He is also involved in regional social movements and politics.  He researches and writes about police violence, criminalization of the poor, social justice, and social struggles, amongst other areas. His articles and video interviews are published by roape.net, Africa Is a Country (AIAC), Daraja Press, Verso Books and others.