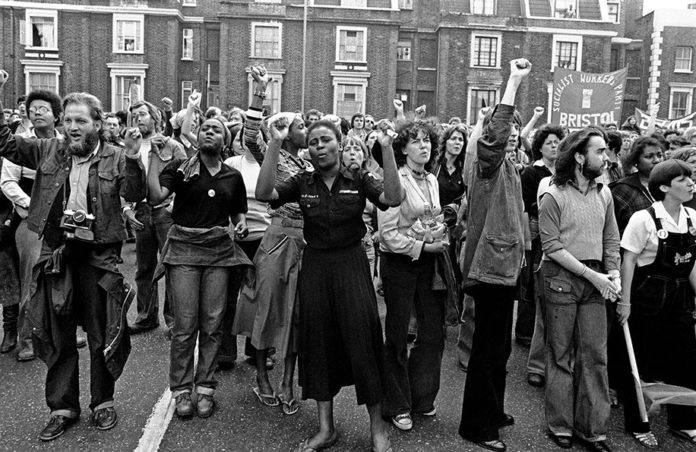 Often the conversation on migration falls into familiar discourse. From the right, it’s the threat of the “foreigner” and the need to protect the nation, rhetoric steeped in racist language and actions. From Liberals and sections of the left, the argument often draws on the appeal of human rights, compounded with the argument that migration benefits the economy and promotes multiculturalism. Both sides of the argument tend to view migration as an issue solely of assimilation or the management of borders. In Migration Beyond Capitalism, author Hannah Cross aims to disrupt and bring a new left-wing response to the narrative around migration. Migration Beyond Capitalism centres migration within labour politics, demonstrating how current migration discourse “tends to ignore or take for granted the role of overexploited migrant labour in successive capitalist orders…” (Cross 9).. Throughout the book, Cross outlines how migration reflects and reinforces inequalities, such as income, gender and race, that are manifested through capitalism. By doing so, Cross presents a global and connected working-class of migrants and native workers that are the key to fighting against capitalism.

Cross grounds this analysis in Marxist theory by posing Karl Marx’s letter on the Irish Question, written in 1870, as a starting point (24). The migration of Irish workers created cheaper labour for the English ruling class. This, in turn, created divisions between the Irish and English working class in English towns and cities, which the ruling class exacerbated through politics, media and more. By dividing the working class, the ruling class ensured that they could control English workers by stopping them from uniting with their Irish co-workers in a struggle for higher wage and better working conditions. Thus two groups of workers with identical material interests were kept apart from one another. Marx argues that the struggle for freedom in Ireland against the English ruling class, and that of English workers, could only be achieved through a unified class struggle.

Migration Beyond Capitalism takes Marx’s writing on the Irish Question and applies it to the migration debate today. Cross examines how capitalism historically and continuously thrives on inequalities and the division of the working class. Cross draws from both the global North and South but places a specific focus on Western Europe and the United States. These divisions emerge through various mechanisms such as Fortress Europe, which is used to privilege movement from EU citizens while criminalising and excluding others. It also emerges through labour exploitation and businesses that demand “…access to specific forms of labour, influencing the laws and policies of the capitalist state” (101). Centring labour within the conversation on migration outlines the inherent inequalities within the capitalist system.

Cross also shows how tensions between workers can be eroded, leading to class solidarity. As evidenced in the 2009 Lindsey Oil Refinery Strikes in the UK, workers went on strike to demand better working conditions, rights and job security (124). Rather than demand that migrant workers be expelled or fired, the unofficial strike argued for migrant workers to be able to unionize and receive union assistance (125). The workers were united in fighting against the poor conditions that they all faced. For Cross, this solidarity is key and can be understood and advocated for by workers by analysing migration through the lens of the political economy of labour.

The relationship between inequality and migration comes through particularly well in the chapter on imperialism and migrant labour in the capitalist world. The common thread in the capitalist world is the focus on capital accumulation, the steady deterioration of labour and disregard of human needs. Cross expertly weaves these themes by analysing the historic, social and economic impact of slavery, colonialism and neoliberalism. Migration became a vehicle for capitalist ambition, by any means necessary – low to no wages, brutalised communities, horrific working conditions and more (53). This erosion of labour continues into the neoliberal era.

This chapter best demonstrates the strength of this book, a clear explanation of how the exploitation of labour, through migration, impacts workers in the global North and South. Development institutions such as the World Bank began “cutting welfare spending…and transformed monetary policy, causing enormous dislocation and harm to local production and livelihoods”, during the early neoliberal period. This coincided with trade unions in the global North becoming “depoliticized and deradicalized, operating in narrow institutional channels that blunt rather than destabilize neoliberalism” (93). Given these changes, workers in the Global South faced the growth of foreign direct investment to build factories built on low waged workers and resource extraction. This, in turn, provided transnational companies, specifically in the global North, with the opportunity to discourage unions from pushing for further demands (wage increases, better working conditions) under the threat of relocating to the Global South. The divide and rule tactic is key to the assault on workers globally. By outlining this tactic, Cross highlights the similar conditions that all workers face, making a well-evidenced case for international solidarity.

Through the lens of the political economy of labour, Cross demonstrates how the ruling classes use migration as a tool to create class divisions based on race, gender, religion, amongst others. Yet by centring migration, and further class antagonisms, through the politics of labour fails to give equal analysis to other forces that perpetuate and exacerbate class tensions.

For example, in the chapter on class antagonisms, Cross provides an analysis of racism and rightly argues that these divisions are manufactured through the state and media. Cross briefly touches on the fact that capitalism creates “… a false notion of privilege on the native-born white working class” (114). Yet Cross neglects to explore further how and why racist ideologies continue to be an effective tool in creating these seemingly “privileged sections” of workers (127). It is increasingly important to analyse the power of this rhetoric given that a growing response to the failures of late capitalism has been the rise of the Far Right and overall national chauvinism.

The need to divide workers, created and maintained by capitalist ambition, is also supported through the narrative of the nation-state. For many Western countries, those who belong to the nation or ‘imagined communities’ are centred as being white/Anglo, heterosexual, Christian and male. Those who traverse these boundaries are the ‘others’. On the one hand, this becomes a way in which the state racialises and scapegoats migrants during economic hardship. On the other hand, the narrative also deems migrants suitable for ‘low skilled’ jobs that native workers seemingly refuse to take, further strengthening racist hierarchies while creating class divisions and racist narratives to reinforce them.

The strength of the nation-state narrative comes through clearly in the example of Medhi Hasan challenging Paul Collier on his assertion that “indigenous British have become a minority in their own capital” (115). Hasan correctly asserts that the census shows that 63 per cent of London’s population is born in the UK and rather it’s the white British population that is a minority. Cross uses this example as a way in which to demonstrate how poor interpretation of data, or science, is used to reinforce racist ideology. While this is true, it also is quite apparent that Collier equates indigenous, or belonging to the British nation, to being white. This presented a missed opportunity to explore how ideas of belonging are reinforced by the demarcation of borders and citizenship rights. In the context of migration, this creates further tensions between migrant and native workers, often perpetuated by the spread of racist ideology. The fact that it’s reinforced by politicians, the media and leading Oxford professors, such as Collier, only strengthens the argument that racism is a system and ideology that benefits the ruling class. In the end, the mechanisms that support racism and class divisions are powerful and interconnected. Thus it deserves a further analysis of the whole system, from the economic to the political and social perspective, rather than within the boundaries of labour politics and migration.

Cross ends Migration Beyond Capitalism with an appeal for the left to distance itself from the rallying slogan for ‘open borders’. Instead Cross advocates for equality of movement, a radical transformation of migration politics which “highlights the inequalities between countries and people and can be at the centre of a progressive migration regime” (175). It’s important to note that Cross argues against an open borders rallying call because it “…can seek advancement by means of alliances with opportunistic and harmful forces, thus preventing systemic change and failing to persuade those beyond the activist grouping” (170).

The open borders slogan is co-opted by those who push for migration as a means to provide “low skilled” jobs that benefit the economy. As Cross correctly states, this fails to address the root causes and ignores the inequalities reflected through migration. However, the rhetoric of open borders should not be discounted, especially given that abolishing borders is a key socialist argument. Given this, it’s important to be explicit in this stance, rather than back away from it. The call for open borders and the equality of movement argument are not dichotomies, both fight for the same future – one that benefits the working class with the dismantling of militarized borders. As such, the issue is not so much the call for open borders but instead how the slogan is co-opted in global discourse. Thus, an open border argument must be made but distinguished in its meaning by centring it around labour politics. Not only would this highlight how borders are used to serve capital accumulation but also grounds working-class interests within the open borders argument. Doing so only strengthens the argument for the equality of movement that Cross advocates for so powerfully.

International solidarity and the working class

The fight for migrant rights cannot be articulated as a moral or human rights issue. Instead, it’s a question of survival for both migrant and native workers that have experienced the deterioration of wages, living conditions and more. Cross analyses migration with a labour centric approach – outlining the global attack on workers while more importantly, highlighting the connections and advocating for international solidarity. Cross’ approach provides a much-needed reorientation on the discussion around migration. By doing so, Cross effectively demonstrates why an internationalist working-class response is the key to defeating neoliberal power and creating a new world.

Baindu Kallon holds a MA in African Studies from SOAS and has a keen interest in economic development and migration policy in West Africa. In her spare time, Baindu is a community activist and works with black creatives in the UK.