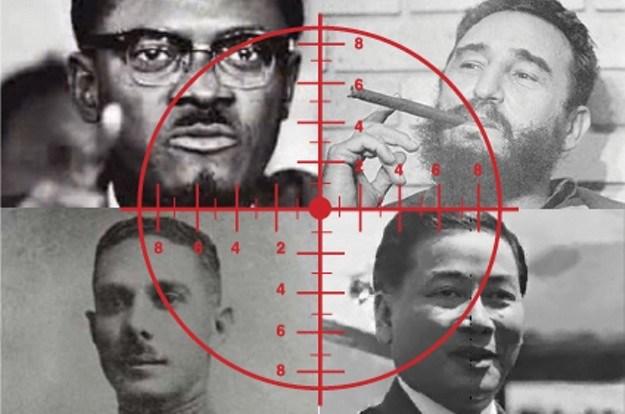 David Seddon reviews Washington Bullets: a History of the CIA, Coups and Assassinations, by Vijay Prashad.  This is a book about how political leaders and other activists considered to pose a threat to US and more broadly Western interests have been assassinated, removed in coups and eliminated.

This short book by Vijay Prashad – who is Executive Director of Tricontinental: Institute for Social Research, chief correspondent at Globetrotter and chief editor at LeftWord Books – is unusual, both in its structure and in its subject matter. Short and to the point, Prashad makes it clear how he was strongly supported in the production of this text by his team at Tricontinental and encouraged ‘to write it as quickly as possible’. Although he does not make explicit reference to Mao Zedong, he makes it clear, in the main title of the book that, in his view, US imperialism relies ultimately on the fact that ‘political power grows out of the barrel of a gun’.

After a Preface by Evo Morales Ayma, former President of Bolivia, the first section is a two page section on Files, in which the reader is told that the text relies on the extensive perusal and ‘a vast amount of reading’ of official files and documents, both published and unpublished – and ‘a lifetime of activity and reading’  – and that ‘nothing has been as useful to me as the conversations I have had with ex-CIA agents’. The book dispenses with the usual apparatus of detailed references to documents and texts, and has no index, although there is a brief section at the end on Sources, in which the author remarks that ‘listing all the books and articles would surely make this book double its current size’.

Prashad comments that this ‘is a book about the shadows, but it relies upon the literature of the light’. ‘The shadows’ refers mainly to the murky, underground aspects of US imperialism, with special reference to conspiracy and the CIA and its role in removing – by coups and by assassinations – those political leaders and other activists considered to pose a threat to specifically US and more broadly ‘Western’ interests across the world. This is what is meant by ‘Washington Bullets’.

The book is divided into sections, the logic of which largely escapes me. The first, very brief section is called ‘Bring Down More US Aircraft’ – a phrase attributed to Ho Chi Minh during the Vietnam War. It sets out a kind of thesis, starting with ‘bullets’ and ending with ‘hope’: ‘Washington bullets are sleek and dangerous. They intimidate and they create loyalties out of fear. Their antidote is hope’– hope of another future. This section ends with a poem.

Then comes Part 1, divided under a series of headings, which seem to encapsulate different ideological justifications for the exercise of ‘preponderant power’. These are: Divine Right, Preponderant Power, Trusteeship, ‘international law has to treat natives as uncivilized’, ‘savage tribes do not conform to the codes of civilized warfare’, Natives and the Universal, UN Charter, ‘I am for America’, Solidarity with the United States against Communism, ‘No Communists in Gov. or Else’, ‘Nothing Can Be Allowed’, Third World Project, Expose the US ‘Unnecessarily’.

In Part 2, which seems to be more focused on the pragmatic side of intervention, the first main header is: Manual for Regime Change, which is divided into nine sub-sections – Lobby ‘public’ opinion, Appoint the right man on the ground, Make sure the Generals are ready, Make the economy scream, Diplomatic isolation, Organize mass protests, Green light, A Study of Assassination, and Deny. The second header is Production of Amnesia, which is followed by ‘Be a Patriot, Kill a Priest’, The Answer to Communism Lay in the Hope of Muslim Revival, ‘I Strongly Urge You to Make This a Turning Point’, ‘The Sheet is Too Short’, The Debt of Blood, All the Cameras Have Left for the Next War (which is a poem).

Part 3, which deals essentially with the period from 1989 to 2019, starts with ‘Our Strategy must now Refocus’,  ‘Rising Powers Create Instability in the International State System’, ‘Pave the Whole Country’, Banks Not Tanks, First Among Equals, Only One Member of the Permanent Security Council – The United States, Republic of NGOs, Maximum Pressure, Accelerate the Chaos, Sanctions are a Crime, Law as a Weapon of War, Dynamite in the Streets – which discusses the coup against Evo Morales in Bolivia – and We Believe in People and Life.

This last one-page sub-section accuses those responsible for the coups, the assassinations, and the massacres of wishing ‘to steal the soul of the people so as to reduce people to zombies who must bow their heads down and work, putting their precious labour towards the accumulation of capital for the tyrants of the economy’. The Washington Bullets are a means to an end: domination and exploitation – imperialism. The counter is ‘hope’ and ‘the people’. As the Guatemalan poet, Otto René Castillo, said: ‘we believed in people and life, and life and the people never let us down’.

The book is a rapid survey of conspiracies, of the activities of the CIA, of coups and of assassinations in numerous countries across the world from the 1950s onwards. It is scattered with the names of well-known and lesser-known political figures who were/have been killed by ‘Washington bullets’; but significant as were these ‘tall leaders of the Third World’, it is the thousands of activists (including trade unionists, peasant and other local leaders, as well as intellectuals, journalists, writers and poets) and the millions of ordinary people adversely affected by these US ‘interventions’ who are celebrated here, and to whom in effect the book is dedicated.

See a conversation with Vijay Prashad on his new book here.

David Seddon is a researcher and political activist who has written on social movements, class struggles and political transitions across the developing world. David is a regular contributor to roape.net and a former member of the Editorial Working Group of ROAPE.

Vijay Prashad’s Washington Bullets: a History of the CIA, Coups and Assassinations, is published by Monthly Review Press.