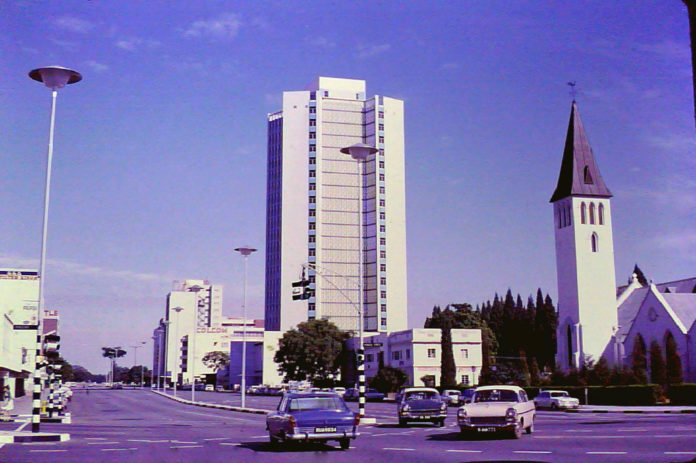 Nicola Ginsburgh explores the class experiences of white workers in Southern Rhodesia, based on her recent book (reviewed in ROAPE by Alex Callinicos – see blogpost for full review). She builds on whiteness literature and synthesizes theories of race, class and gender within a Marxist framework. Ginsburgh sees race and class as mutually constitutive and inseparable from the historical development of capitalism.

Many settlers arrived in Rhodesia with hopes that they would transcend into a white classless utopia. Particularly in the last decades of white rule, the image of a pleasant middle-class existence consisting of sundowners, swimming pools and deferential servants gave the impression that in Rhodesia, divisions of class had been successfully displaced by those of race.

Research on settlers in colonial and postcolonial Zimbabwe has often replicated the image of a relatively homogeneous, wealthy and largely rural population. However, the character of Rhodesian settlement was overwhelmingly urban; its white population more closely reflected descriptions of Rhodesia as a ‘Working Man’s Colony’ than of a community of middle-class farmers.[1]

Class divisions were not erased in Rhodesia. Rather, precisely because racial ideologies demanded that settlers possess uniform characteristics befitting of a “master race”, class divisions took on urgent dimensions. In my book, Class, Work and Whiteness, I argue that not only were class and the worlds of work central to the ways in which ascriptive identities were constructed, contested and remade, but that white workers’ struggles against Africans, employers and the state had important implications for the development and demise of Rhodesian settler colonialism.

In the first decades of colonisation the Rhodesian economy formed around mining and agricultural industries which favoured migrant labour systems and were reliant on the hyper-exploitation of African Chibaro labour. Higher paid semi-skilled and skilled positions were dominated by white male migrants from Britain and South Africa who fought to exclude Africans, women and non-British whites from their ranks.

In these early years, transnational flows of labour shaped white worker’s trade union militancy and political ideologies which reflected an uneasy combination of socialism and white supremacy. The white working class was a heterogeneous formation, fractured along the lines of ethnicity, nationality, gender, skill and occupation. Yet despite these internal fissures, lower class whites could unite in opposition to Africans. An array of economic, political and social policies ensured they received higher wages, better housing, healthcare and education than the majority black population.

Whiteness studies has been an increasingly popular framework to analyse workers who were both exploited by capital but privileged through race. By drawing on whiteness studies and Marxist theories of language and class, my book attempts to contribute to the rich body of scholarship which has destabilised whiteness as a natural category and explored the complex processes of racial and class formation.

Analysing the intersections of race and class in the US, David Roediger has argued that white workers had their experiences of exploitation softened by the ‘status and privileges conferred by race’.[4] Yet, as Deborah Posel has argued with regards to apartheid South Africa, the wages of whiteness were ‘double-edged’. Many whites in the civil service were looked down upon as gaining employment as a result of their skin colour, rather than their skill or intelligence. As such, the privileges attached to race could elicit indignity and shame.[5]

Racial ideologies often provoked psychological distress for white workers who struggled to reconcile their supposed racial superiority with their class status. Lower class whites were variously feared and repulsed by elite whites; seen as a rowdy mob capable of infecting Africans with ideas of trade unionism; susceptible to racial degeneration and more likely to act in inappropriate ways which threatened the stability of racial hierarchies. Employers and middle-class whites repeatedly attempted to humiliate white workers: they criticised their high wages and bemoaned them as inept, inadequate and entitled. As the century progressed, Africans likewise increasingly highlighted white mediocrity and challenged white workers claims to productivity and respectability.

In turn, white trade unions mobilised around pride, shame and anger in order to police white worker behaviours and regulate anxieties. They sought to transform the shame of poverty through notions of pride in work, in trade unionism and by loudly trumpeting their own status as the productive force behind empire. Yet these strategies did not eradicate pervasive fears that they would be undercut and displaced by cheaper black labour; that without protections from the state they would degenerate, become poor whites and be unable to perform their racial difference from Africans. This structural insecurity shaped the idiosyncratic ways in which white workers imagined the erasure of the indigenous population as they fiercely struggled over the boundaries of ‘white’ and ‘black’ work, fantasised about entirely white workplaces and forcefully asserted the delusional belief that African labour was unproductive and unimportant.

At different times British dominated trade unions variously incorporated or rallied against ‘undesirable’ whites including Afrikaners, Greeks, Italians and the Portuguese. The highest paid jobs were often reserved for those of British stock and trade unionists repeatedly engaged in inconclusive debates over how racial hierarchies should be replicated in the workplace with regards to non-British whites and mixed raced persons. They also proved reluctant to determine the racial purity of many of their members. Their debates show that even for the most zealous settler ideologues, racial boundaries were not always obvious.

Settlers did not possess uniform ‘white behaviours’ or attitudes. Ideas about race, gender and nationality varied across different social groups, changed over time and were deeply shaped by class. White workers constructed their racial and gendered identities through work – and these identities were highly dynamic. Just as the continual flow of new migrants shaped and disrupted trade union structures, racial ideologies and class identities, the capitalist mode of production both reproduced and destabilised ascriptive categories.

As particular industries variously emerged and declined, the boundaries of white male work were continually redrawn. From the Second World War, the expansion of secondary industry made white worker’s monopoly of semi-skilled and skilled work increasingly untenable. White women’s idealised roles as doting housewives and mothers of the race conflicted with labour shortages and settler commitment to the colour bar. White women took on a variety of paid work and engaged in struggles against employers and racial others; their entrance into wage labour reshaped dominant notions of white femininity and masculinity and stirred anxieties over gendered and racial hierarchies.

The 1940s also marked a period of growing African urbanisation, the rise of an African middle class, African militancy, and trade union organisation. I explore these interrelated processes which destabilised and emasculated white male workers. Just as white men felt workplace hierarchies shift beneath them, they attempted to reinstate their gendered and racial power: throughout the 1940s their trade union journals printed allusions to African violence and invocations to a Black Peril, which stereotyped black men as inherently lecherous and unstable predators and white women as vulnerable and weak.

In recent years discourses of white victimhood and reverse racism have been utilised to strengthen nationalism and white supremacy whilst the far-right has constructed itself as the champion of the white working class. Yet invocations of ‘reverse racism’ and appeals to nationalism rely on active distortion of histories of race and class and obscures the role of capitalist social relations in creating and reproducing this differentiation. By understanding race and class as mutually constitutive and inseparable from the historical development of capitalism, I hope my work provides a modest contribution to our understanding of how class has been historically racialised to justify inequality and the intertwined processes of exploitation and oppression.

Nicola Ginsburgh is a Postdoctoral Fellow with the International Studies Group at the University of the Free State, South Africa. Ginsburgh is a socialist and activist.

[4] David Roediger, The Wages of Whiteness: Race and the Making of the American Working Class, London, 2007.