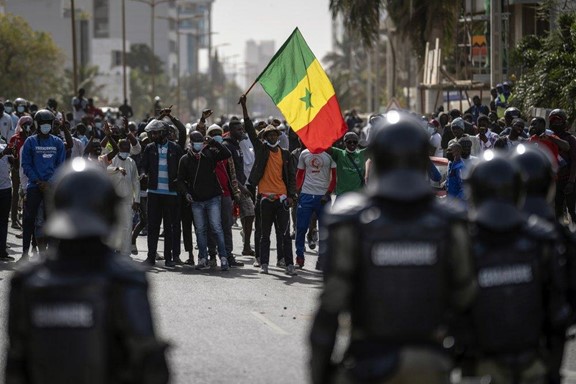 As large protests have rocked Senegal, the government has used live fire and militias to crush the movement. A collective of Senegalese artists and academics calls for President Macky Sall to be held accountable for his crimes.

Since the arrest of leading opposition politician Ousmane Sonko on 3 March, Senegal has been gripped by unprecedented popular protests.

Rather than listen to the demands of the largely peaceful protest movement, the government has set out to crush it using all the means at its disposal: arbitrary arrests, the use of live ammunition, and the deployment of marauding militias.

In February, Sonko, president of the opposition PASTEF party (Patriots of Senegal for Work, Ethics, and Fraternity), was accused of rape and making death threats by an employee of a beauty parlour and has been subsequently stripped of his parliamentary immunity by an ad hoc commission dominated by pro-government MPs.

Hopes of a just resolution to the allegations were dashed when, en route to court, Sonko was arbitrarily arrested and placed in police custody for “disturbing public order”.

That was the last straw. Public anger erupted, setting the country ablaze.

The grievances that triggered countrywide demonstrations – from the capital Dakar to the Casamance region in the far south – go far beyond Sonko’s case. In the streets and on social media, cries of “Free Senegal” and “Macky out” have all but drowned out those of “Free Sonko”.

Rampant youth unemployment, growing inequality, corruption scandals, compounded by repressive measures amid the COVID-19 pandemic, are at the root of growing public anger. We are seeing a fed-up population taking to the streets to reject the country’s ruling political class.

A climate of terror

Since February, hardly a day has passed without the police raiding and arresting PASTEF activists, members of the Front for a Popular Anti-imperialist and Pan-African Revolution movement (FRAPP), and other political figures.

Numerous human rights organisations have sounded the alarm, with Amnesty International calling on Senegalese authorities to “stop arbitrary arrests of opponents and activists, respect freedom of peaceful assembly and freedom of expression, and shed light on the presence of men armed with clubs alongside the security forces.”

Additionally, torture, a tool of colonial repression maintained by every regime since independence, has again reared its ugly head. Khadidiatou Ndiouck Faye, director of the notorious Cape Manuel prison, appeared to confirm as much, when she said on 4 March that uncooperative political prisoners were being held in punitive cells where “the rule is that the detainee commits suicide”.

In addition to restrictions of access to social media, confirmed by the cybersecurity monitor NetBlocks, the authorities have shut down several private television and radio stations. Numerous videos shared on social media show security forces pursuing unarmed protesters amid the sound of gunfire.

In some regions, the Senegalese state has called in the army. So far, at least 10 people have been killed and hundreds seriously injured.

Despite the mounting death toll, the government has decided to dig in its heels. On 5 March, after the third day of mobilisation, called by the Y’en a Marre (“fed up”) collective, which in 2011 mobilised the youth to overthrow former President Abdoulaye Wade, Interior Minister Antoine Félix Diome released a statement confirming President Macky Sall’s determination to stop at nothing. Mr Diome characterised the violence as “terrorist” and said demonstrators were manipulated by “occult forces”.

Since its independence, Senegal has won powerful allies – foremost among them, France – which have supported successive regimes, turning a blind eye to authoritarianism and human rights violations.

The image of a “model democracy”, an island of stability in the restive Sahel region, fashioned by the country’s first president, Léopold Sédar Senghor, himself the head of a single-party regime repressing the opposition, still resonates internationally.

The country opened up to a multi-party system in the 1980s and went through two transitions of power in 2000 and 2012. But President Abdoulaye Wade (2000-2012) and now Macky Sall (since 2012), once opponents, have both followed in their authoritarian predecessors’ footsteps.

Such concentration of power in the hands of the president goes back to the hyper-presidential system inherited from the 5th French Republic of 1958 and the Senegalese constitution of 1963, which repealed the prime minister’s position after the overthrow of the then-head of government, Mamadou Dia.

The ability of the president to run roughshod over the constitutional separation of powers was confirmed by Macky Sall himself, when in a televised New Year’s Eve speech last year, he said: “If the president knows that the arrest of [a] person [involved in a corruption scandal] will lead to the death of people, will he still arrest him? Maybe there is another way [to solve the problem].”

Indeed, Macky Sall has failed to investigate a corruption scandal revealed in 2019 by BBC in which British Petroleum allegedly agreed to pay $10bn for a suspicious Senegalese gas deal involving Macky Sall’s own brother.

Now that Senegal’s democratic charade has been finally exposed in front of the world’s cameras, impunity for Macky Sall’s regime in the court of international opinion must end. In 2018, the Economic Community of West African States’ Court of Justice condemned the state of Senegal for violating the rights of the former mayor of Dakar and main presidential contender Khalifa Sall who was found guilty of embezzlement and imprisoned in 2017.

In the wake of the scale of the regime’s repression, mere declarations are no longer enough. We demand full accountability and justice for the crimes committed before Senegalese and international courts.

A version of this blogpost was first published as ‘Senegal: Impunity for Macky Sall’s regime must end’ by Al Jazeera English.

Boubacar Boris Diop is a Senegalese novelist and journalist, author of over a dozen novels and essays in French and Wolof, including Murambi, The Book of Bones (2006), Doomi Golo (2006), and The Knight and His Shadow (2015).

Demba Gueye, specialist in digital communication and initiator of the hashtag #kebetu;