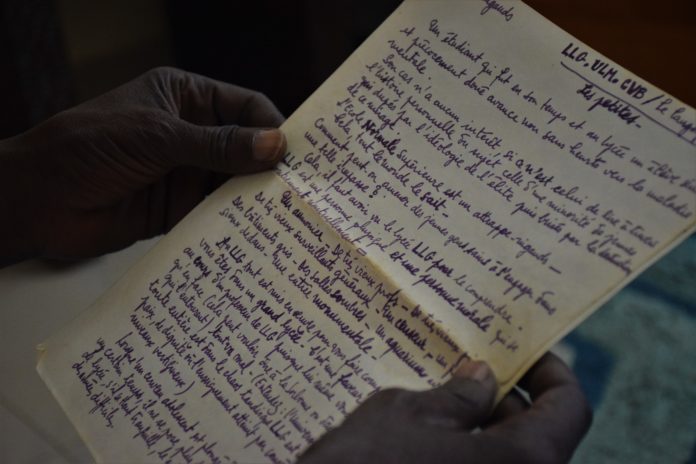 In Senegal, the “Diary Sow case” has reopened the debate on the elitist French grandes écoles system. Over fifty years ago, Senegalese revolutionary Omar Blondin Diop had made a strong case against them in a film synopsis. Today, his family has decided to make this previously unpublished text public. Florian Bobin writes about what is going on.

The yellowish letter paper is still warm. Its edges, dented, victim to humidity, betraying time spent in storage. The title reads “L’attrape-nigauds” (“The Sucker Bait”). Some words are bolded with several layers of thick purple ink, others are crossed out. The author’s name is nowhere to be seen, but the style reveals his identity—Omar Blondin Diop.

Red keffiyeh around the neck, Cheikh Hamallah Diop’s gaze is fixed on his older brother’s text. Since the late 1960s, the family has carefully preserved these four pages. “It’s a film synopsis that remained an idea,” he reveals. One that never saw the light of day because Blondin Diop’s fate was quickly shattered.

In Senegal, his tragic death at Gorée prison in May 1973, disguised as suicide by President Leopold Sedar Senghor’s regime, remains a symbol for much of the younger generation. Despite himself, he posthumously became an icon of state violence, modus operandi of neo-colonial rule.

At the core, Blondin Diop is an unclassifiable figure of the Global 1960s, who, from Paris to Dakar via Algiers and Bamako, participated in his epoch’s political and artistic fervour. Exhibitions, films, academic research: his life and work, still unknown to many, has aroused real interest in recent years. More fundamentally, a foundational period of history—anti-capitalist and anti-imperialist revolts worldwide, post-colonial African disillusionment, and political Senghorism—is resurfacing today.

In the summer of 1968, Omar Blondin Diop attended several film shootings in London, introduced to British counterculture cinema by his director friend Simon Hartog. The duo was used to taking notes of their respective projects. The synopsis of “The Sucker Bait” most likely came to life in this context—a film meant to depict the decadence of a young man obsessed with “the elite’s ideology,” making “the grandes écoles world the only one he admits as a reference.”

Blondin Diop, himself a student of philosophy in Paris at the prestigious École normale supérieure (ENS), had spent the spring of 1968 between the crowded lecture halls of Nanterre University and student demonstrations in the Latin Quarter. Upon his return from the British capital, he dropped out of the school.

Why leave the institution before even obtaining his degree, he whose career seemed all mapped out, as a former student of Lycée Louis-le-Grand, like a certain ‘poet-president’ compatriot, and the first Senegalese to be admitted to ENS? Precisely for all these reasons. For, he writes, “after two years or more of this regime, the student, if he has not become mentally ill, constitutes a little monster of bookish knowledge and grotesque pretentiousness.”

The questioning of the elitist French grandes écoles system remains topical. In January, the disappearance of Diary Sow, a student in her second year of preparatory classes at the Lycée Louis-le-Grand, dubbed Senegal’s “best pupil” in 2018 and 2019 for her academic results, raised numerous questions. “When the case first came up, many things were said,” Cheikh Hamallah Diop asserts, “but there was no criticism of the system which, in my opinion, is an aberration: schools of excellence.”

This prompted Omar Blondin Diop’s family to make “The Sucker Bait” public—a sort of farewell letter to the grandes écoles. Despite being over half a century old, the text has barely aged a day.

Together with roape.net we published the first translation of the text in English:

A student who was in his time and in high school a serious and early gifted student advances, not without hurdles, towards mental illness.

His case is of no interest, except to read through the subject’s personal history that of a minority of young people duped by the elite’s ideology and then shattered by the destruction of this mirage.

The École Normale Supérieure is a sucker bait.[1] Everyone knows that. How can healthy young people be brought to such a dead end?

You have to have seen the LLG high school to understand this…[2] A chaplain – Very old teachers – Very old monitors – Very old invigilators – A censor – A principal – Grey buildings – Dark rooms – An aquarium with a bailiff in it – A monumental entrance.

At LLG everything is done to make you understand that you are in an important high school. It is a favour to attend an LLG professor’s class since he himself explains to you that across the street (that can mean at the Sorbonne or in the bars surrounding it) everything is going wrong – (Understand: French University in its entirety is in chaos while LLG is a haven of peace and dignity where teaching consequently reaches vertiginous levels).

When a teenage brain is immersed in this jar for a while, it no longer asks questions about its future. The high school, if it keeps quiet, will guide it serenely out of the difficult years.

Once one has assimilated and accepted the jar’s aristocratic ideology, one must draw all the consequences if one wants to succeed: the extreme consequence is total intellectual subservience, which notably manifests itself in artificial, stupid, or even ludicrous exercises.

Dissertations on the great century in which students must compete in erudition.
Compilation of textbooks.
The art of playing with words.
The art of taking notes without understanding a thing.
The art of talking about authors with little scraps of ideas.

After two or more years of this regime, the student, if he has not become mentally ill, constitutes a little monster of bookish knowledge and grotesque pretentiousness.

The Elite is not about Having; it is about Being. The second time around, the candidate usually comes out of the kennel. LLG has performed its duty – The teenager’s life is all mapped out. At Ulm, coercion will not even be needed anymore. This is when the breakup occurs for those whose view of reality has not been completely clogged.

Ulm is a world of delusion that hesitates between the Executive School and the clinic for difficult adolescents.

The case we are trying to grasp is that of a boy who lives on the margins of this marginal world.

First symptom: the world of the grandes écoles is the only one he admits as a reference. It is a ghost that haunts him for the simple reason that he could not keep up with the LLG-Ulm path (he had his first acute crisis at the Lycée Louis Le Grand: after attacking the school principal, whom he insulted and beat up, he was expelled and spent some time in a clinic) – It had already become impossible for him to write a dissertation.

The following year, he re-enrolled in preparatory class at the Lycée Henri IV.

After a failed attempt at going back to work, it seems that a new element appears in his life. He becomes attached to a young girl who is in preparatory class herself. She seems to have been fascinated by his mastery of language (it is well known that in France, the ability to speak is one of the essential weapons of academic success).

There, the subject probably found a substitute that allowed him to get out of the conflicts that were shaking him up.

Second symptom: Establishment of very complex relations between the subject and the young preparatory pupil.

The result of these relationships is a perpetual tension that leads to the subject’s attempt to destroy the young girl, who refuses to coincide precisely with the representation he makes of her. The breakup with the girl is carried out for the benefit of political engagement in the CVB.

For the subject, the CVB are a means to return towards Rue d’Ulm while escaping from himself.

The Grass-root Vietnam Committees are an anti-imperialist mass organization led by the UJCML; a Maoist organization formed from the Rue d’Ulm UEC circle.[4]

There is thus, on the one hand, the intellectual aspect of the matter: the CVB’s literature is a certain way of interpreting Louis Althusser’s teaching [5] and that of the Cahiers d’Epistémologie.[6]

On the other hand, there is the organizational aspect: young people deciding for themselves the direction they want to give to their lives and equipping themselves of structures that will allow them to do so.

Finally, there is the political fact, which is the only real fact in the film: we will show it in this kind of evidence that surrounds the exercise of violence.

Violence is appropriately the only sphere that allows aspects of aristocratic teaching to manifest its existence.

Florian Bobin’s research focuses on post-colonial liberation struggles and state violence from the 1960s and 1970s in Senegal. He is the author of Omar Blondin Diop: Seeking Revolution in Senegal and Poetic Injustice: The Senghor Myth and Senegal’s Independence published on roape.net, as well as Law and disorder published on africasacountry.com.

[1] The Ecole normale supérieure (ENS), founded in the late 18th century during the French Revolution, is one of the most selective post-secondary schools in France, whose main branch is located rue d’Ulm in Paris’ Latin Quarter. Specializing in literature and science, its curriculum notably prepares the student for teaching, applied research, and the civil service.

[2] The Lycée Louis-le-Grand (LLG), founded as a Jesuit college in the mid-17th century, renamed a century later in honour of King Louis XIV (whose regime set up the first French trading post in Africa, on the island of Ndar in Senegal), is one of the country’s most elitist public high schools. Located not far from ENS and the Lycée Henri-IV in the Latin Quarter, LLG is known for its demanding Grandes Écoles Preparatory Classes (CPGE); part of the “LLG-Ulm path” Blondin Diop describes.

[3] Lagarde et Michard is a French literature textbook published by Bordas Editions from 1948 to 1962 by literature teachers André Lagarde (from the Lycée Louis-le-Grand) and Laurent Michard (from the Lycée Henri-IV). Composed of author biographies, text commentaries and questions addressed to students, Lagarde et Michard remained, until the early 1990s in France, the reference textbook for teaching French in secondary schools.

[4] The Union of Communist Students (UEC) is a French student political organization founded in 1939, close to the French Communist Party (PCF). During the 1960s, ideological divergences within its ranks gave birth, in 1966, to the Trotskyist Revolutionary Communist Youth (JCR) and the Maoist Union of Marxist-Leninist Communist Youth (UJCML), primarily composed of “Ulmards” (students from ENS rue d’Ulm). Opposed to the American war in Vietnam, the JCR and UJCML respectively founded the National Vietnam Committees (CVN) and the Grass-root Vietnam Committees (CVB). Sympathizers to both movements played an essential role in the “May ’68” mobilization.

[5] Louis Althusser (1918-1990) was a French Marxist philosopher, professor at ENS from 1948 to 1980, whose teachings influenced many students who partook and led the “May ’68” demonstrations, in particular the UEC’s “Ulm circle,” embryo of the UJCML. The philosopher did not, however, openly give them his support.

[6] The Cahiers pour l’Analyse, referred to as the Cahiers d’Épistémologie by Blondin Diop, is a journal of philosophy published from 1966 to 1969 by ENS’ Cercle d’Épistémologie (Circle of Epistemology), a group of Louis Althusser’s students.