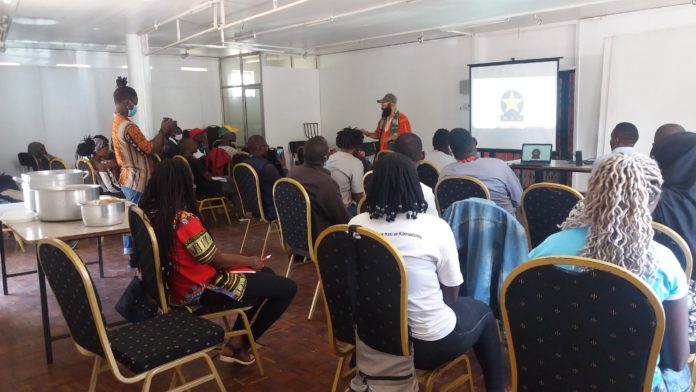 Ezra Otieno reflects on a recent meeting in Nairobi celebrating the lives of important revolutionaries and activists. On 29 January at the Kenya National Theatre, the politics, theories and lessons of Patrice Lumumba, Amilcar Cabral, Rosa Luxemburg, and Titina Silla were remembered.

January also saw the demise of several revolutionary comrades like Lenin who died of natural causes, Patrice Lumumba, Rosa Luxemburg, Amilcar Cabral, and Titina Silla, who were murdered by their respective retrogressive regimes. It is for this reason that those of us in Kenya, more specifically in the Revolutionary Socialist League together with Ukombozi Library and All African People’s Revolutionary Party, saw fit to commemorate these four comrades. This gathering was also an opportunity for us to politically educate our new comrades and the public at large about the lives and politics of these revolutionaries.

The event was well attended, and the audience was eager, ready to listen and learn. All through the event, the audience engaged the speakers with questions and comments and at the end of the meeting they were satisfied and stimulated with the day. It began with a brief introduction and a background of why we were having this commemoration. It was then followed by presentations on each revolutionary. These were preceded by short documentaries about each of them.

Titina Silla (1943 –1973) was remembered as a brave heroine who joined the PAIGC (African Party for the Independence of Guinea and Cape Verde) in her home of Guinea-Bissau. In the early 1960s at a very young age, she was already struggling alongside others for independence and socialism. Amongst others she was deployed by the PAIGC in northern Guinea Bissau for health awareness campaigns. She even visited the Soviet Union and trained as a nurse also gaining political experience, then quickly rose within the party to become one of the most influential members of the PAIGC. She was killed on 30 January by Portuguese soldiers while traveling to attend Amilcar Cabral’s funeral. To date, her legacy is celebrated not only in Guinea Bissau but all around the world. Her courage and determination show how women can break the shackles of patriarchy and lead the struggle.

Next was a presentation about Amilcar Cabral. The speaker emphasized the fact that Cabral during his lifetime (1924–1973) championed for a cultural revolution of the people. Cabral insisted on the ideological development of the masses for the permanence of the revolution to be ensured. He urged his people to change their mindset which according to him was the most powerful tool used by the Portuguese to colonize the people of Africa. The speaker hailed Cabral as one of the greatest revolutionaries of his time as he had analyzed Marxism and put it in the African context. He also had studied abroad in Portugal but chose to commit himself to the independence struggle in Guinea Bissau. Cabral used his knowledge to help the masses rather than exploit them. He was assassinated on 20 January 1973, just after he had begun to form peoples’ assembly in preparation for the independence of Guinea Bissau. His legacy lives on today and his works are used as a guide to revolutionaries all over the world. The speaker urged the audience to read Cabral’s writings, citing Return to the Source as an insightful read. We then watched a short documentary about Cabral to supplement the presentation.

Then there was a presentation on Rosa Luxemburg (1871-1919), who was murdered on 15 January, 1919, executed by the paramilitary, proto-fascist Freikorps together with her comrade Karl Liebknecht. A lot was said about how she championed ideological clarity in the movement. In her book, Reform or Revolution, she took on comrades within the party who opted for the path of so-called gradual reforms. She insisted that the only way to push for real change was through the hammer blows of revolution. She believed that the collapse of capitalism was not inevitable and meaningful change could only be secured through revolution – the alternative was, she argued, either socialism or barbarism. She was testimony that women must stand on the frontline in the struggle, as Titina did decades later. We also learned that crushing capitalism goes hand in hand with crushing patriarchy.

Finally, there was a presentation on Patrice Lumumba (1925-1961) brutally murdered on 17 January. He was the leader of Congolese independence, a Pan-Africanist revolutionary, who was killed by other Congolese nationalists in coordination with imperialist forces.  The people of the Congo and Africa were robbed of a visionary leader who would have likely fuelled widespread change all over the continent and perhaps even the ultimate defeat of the imperialists.

The meeting emphasized the importance of learning and celebrating our true heroes and heroines especially in a system that thrives on ‘mis-education’ and the pacification of its people.  These four comrades – each murdered in the struggle against capitalist brutality – dedicated their lives to the oppressed and dreamt of a better society free of exploitation, poverty, and ignorance.  In their different ways, they each sought a world of critical thinkers, an educated and confident population, and a people who control the means of creating wealth and community for themselves.

From these comrades, I learned the spirit of internationalism. Rosa clashed with her compatriots because she believed in internationalism and revolution while they sought compromise. The key to a permanent revolution is internationalism. A socialist country in isolation is bound to fail.  All revolutionaries worldwide should look for like-minded partners to connect struggles across the globe.

More so, the importance of women in the struggle cannot be understated. There can be no true liberation without the liberation of women and Rosa Luxemburg and Titina Silla lived by this saying. Likewise, we realize that patriarchy is a creation of capitalism and for it to be crushed, classes too must be abolished completely.

We should also continue with the fight against imperialism since it remains as brutal as it was during Patrice Lumumba’s brief period as the leader of the Congo. Imperialists, with local supporters, businessmen and politicians, may kill progressive leader and replace them with dictatorships to facilitate their continued plunder. One of the most effective forms of propaganda has been to associate dictatorships with individual figureheads. This hides the fact that capitalism is not only the dictatorship of the rich but also a brutal and intricate system of small dictators who control our societies, often with a veneer of democracy.

We offer our tributes to these comrades as their lives, writings, struggles, and thoughts are as relevant today as they were during their lifetime. They continue to sharpen and inspire our revolutionary ideals as we struggle towards a socialist society. May we continue to honor them through our actions and live by their commitment. Let us not be deterred by the oppressors or even death for we have nothing to lose but our chains.

Ezra Otieno is a member of the Revolutionary Socialist League Central Committee in Kenya.