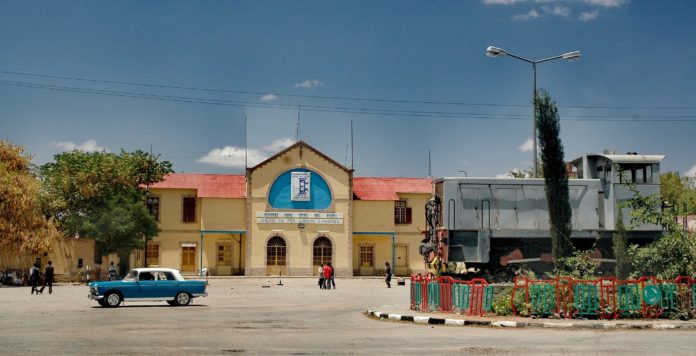 This blogpost explores the conflicted nature of Ethiopian political economy since the change of leadership in 2018, the fall of the Tigray Peoples Liberation Front from power, and the rise of Abiy Ahmed. Wyatt Constantine looks at the country’s second city, Dire Dawa, to examine the complicated and opaque nature of Ethiopia’s new ambitions.

Ethiopia has found itself the centre of international attention, as the armed forces under the direction of Prime minister Abiy Ahmed have entered and nearly fully occupied the northern region of Tigray, home of the Tigray Peoples Liberation Front, whose two year long feud with Ahmed has exploded into open war. Roughly one year after Ahmed was awarded the Nobel Prize for his peace deal with Eritrea, the prime minister is now embarking on a brutal conquest of his most vehement domestic opposition, and the image he had cultivated as a liberal reformer who was once naively claimed to be opening Ethiopia’s “path to economic prosperity” by economist Paul Collier seems to have been all but shattered.[1]

Since assuming leadership early in 2018, Prime minister Abiy Ahmed has embarked on numerous reforms, releasing political prisoners, easing restrictions on internet use, and pushing for vast economic reforms for the Ethiopian economy. Speaking at the World Economic Forum in Davos in January 2019, Ahmed elaborated on Ethiopia’s ambitious plans for “Unleashing to potential of the private sector”, “Reforming State-Owned-Enterprises” and “Opening the economy.”

Ethiopia has experienced tremendous GDP growth over the past decade, and has seen a marked rise in FDI inflows, over 85% of which has gone into manufacturing.[2] Optimistic claims from the World Bank that “Ethiopia’s industrial parks are making jobs a reality” and the Economist that Ethiopia is “Africa’s new Manufacturing hub”, contradictions underlay Ethiopia’s growth narrative as well as that of its political transformation. Despite the high GDP growth, amongst the highest in Africa, and the inflow of foreign investment, Ethiopia’s growing economy has been a highly inequitable affair. Manufacturing remains overwhelmingly concentrated in the capital, with Addis Ababa alone playing host of over 35% of Ethiopia’s manufacturing, more than that of every other region in Ethiopia combined excluding Oromia. While industrial parks in cities such as Hawassa, Mekele, Bahir Dar have indeed created jobs, these jobs generally pay wages so low and have such poor health outcomes that they are largely treated as alternatives to informal sector and agricultural work, with turn-over in some parks reaching as high as 100% annually.[3] Ethiopia has also experienced a massive increase in internally displaced persons in the last few years, with over 3.1 million IDPs, the highest number in the world. While Ahmed’s ‘Medemer’ reforms preach a narrative of pan-Ethiopian unity, the reality is that modern Ethiopia was forged in the fires of imperial conquest. Indeed, Addis Ababa, borne as an imperial capital, maintains characteristics of its imperial origins, sucking in capital, investment, political power, and wealth in amounts no other Ethiopian city can attempt to rival.

With these divergent narratives in mind, one of Ethiopia as a “Growth miracle” and the other as a fragile post-empire in state of unrest, economic precarity, and great uncertainty, the case study material from my research in Dire Dawa attempts to make explicit the complicated and opaque nature of Ethiopia’s political economy, and to showcase how Ethiopia’s growth is being experienced from outside its centre.

Dire Dawa is Ethiopia’s second largest city, and as an urban area in Ethiopia, stands out as relatively unique. It is only one of two chartered cities in Ethiopia, the othering being Addis Ababa, and the city has a reputation as being a somewhat cosmopolitan metropolis. It is not uncommon for those borne in Dire Dawa to refer to themselves as a Dire Lij, or a child of Dire. Constructed around the French built Chemin de Fer Ethiopien early in the 20th century, Dire Dawa has the distinction of being Ethiopia’s first planned city, and from very early in its history found itself the home of a large expatriate community of Greeks, French, Arabs, Somali, Amhara, and Oromo peoples. The old railway station, located in the central neighborhood of Kezira, was a central node in a transregional network of trade and commerce. Even until the late 1980s in the last years of the Ethiopian civil war, Dire Dawa had a reputation as a boomtown and a centre of opportunity. This was due in large part to trade in contraband goods such as cattle and chat, that made their way through Dire Dawa not only to the rest of Ethiopia, but also to nearby Djibouti and Somalia. Older residents speak fondly of this time, speaking of Dire Dawa B’dero, meaning ‘long ago’ or ‘back then’ in Amharic, reminiscing in a manner like that of residents in the American Rustbelt of a time when Dire Dawa was a good place for business and life was easier. Today the old railway station sits mostly unused, playing home to a ticket office for a regional bus company, and home to small and rather rundown museum.

The new Addis Djibouti railway, which has a terminal near Dire Dawa, has been one of several massive infrastructure projects undertaken in the last decade by the Ethiopian government. As opposed to Dire Dawa’s old station which sits in the middle of town, Dire Dawa’s new station is not even found in the city, but almost 5 km at the edge of the village of Melka Jebdu, at the border to the Somali zone. Close to a new multi-million-dollar industrial park under construction, it is curious that the new construction has bypassed the city almost entirely.

Dire Dawa captures some of the contradictions of the Ethiopian political economy, and highlights the degree to which caution should be exercised in making grand claims regarding Ethiopia’s economy and structural transformation. Though Dire Dawa is the largest city in Ethiopia after Addis Ababa, its infrastructure remains remarkably underdeveloped. Only 44% of its households are estimated to be connected to the power grid, and despite a new paved road connecting it to Addis Ababa, many of the city’s roads remain unpaved and turn into nearly impassable mud tracks during heavy rains.[4]

More than one interviewee mentioned the prevalence of Kulalit Bashita, meaning kidney sickness, and said to be wary of the municipal water supply. A 2012 study found that 85% of water sources in Dire Dawa tested positive for faecal bacteria, compared to a massive study in Addis Ababa which found that only 10% of sources were contaminated.[5] Over 5 private water bottling companies can be found in the city, and more than one resident mentioned, in conspiratorial fashion, that Dire Dawa’s water infrastructure had remained intentionally underdeveloped due to pressure from the private bottling companies, though this was impossible to prove.

Dire Dawa remains a site of intense rural to urban migration, and it is seen as a place of opportunity. During my two-month fieldwork stay, multiple interviewees who had migrated to the city, principally young men, did so with the idea that Dire Dawa was a place where a future could be built, and opportunity existed, or simply fleeing rural poverty: ‘I came here from a rural area, as there is little work in my village.’ One young man explained early in the morning in the central neighbourhood of Saido, where day-laborers wait hoping to get work at the construction site of Dire Dawa’s new industrial park: ‘The payment is not so good. I can make maybe 50 ETB (US$1.3) a day as a labourer, and it is not every day that you can get work.’

Despite Dire Dawa’s reputation as a place of opportunity, it has the highest record of unemployment in the entire country, 25.3% as of 2018, compared to a national average of 19.1%.[6] Though the recipient of FDI inflow, this investment does not seem, as of yet, to have been accompanied by structural transformation. Despite being Ethiopia’s second largest city, the perception of Dire Dawa as a site of economic opportunity seems to be rooted more in its past glory days as a railroad and contraband hub, rather than the current reality. The cost of living and food has increased dramatically, with even a one room of poor quality and no facilities costing a minimum of at least 500 ETB a monthly (US$13). A single room in a condominium or stone tenant house is unlikely to be had for anything less than 1000 ETB monthly, and that is at the low end. For Dire Dawa’s thousands of informal laborers and street vendors, the latter of whom average an income of only 988 ETB a month, housing is all but unaffordable.[7]

Residents of Dire Dawa also pay some of the highest food prices in the country, with a kilo of beef costing over 400 ETB (US$10.5). ‘What has changed for us? We are only eating mot shiro’, claimed one young clothes vendor in the neighborhood of Gendekore, referring to a common Ethiopian dish made of pea powder and served on the traditional flatbread injera, except mot shiro contains ‘no onion, no meat, no butter, no tomato, only shiro powder and water.’ Lending credence to this claim is evidence from the Central Statistics Agency. Between April 2018-19, Dire Dawa’s food specific inflation index saw the highest increase of any city in the country, rising to 24.7%.[8] While Ahmed has championed investment and the role of the private sector in helping to fuel Ethiopia’s growth miracle, the reality is that even as GDP has risen, so has fear, suffering, and violence.

While the new administration has without doubt proven its commitment to market-oriented reform and economic liberalism, going so far as to pursue the de-monetization and reissuance of the Ethiopian birr in the middle of the corona pandemic, a potential disaster for Ethiopia’s vast impoverished and un-bankable population, it has proven itself equally ruthless in attempting to centralize power. The ongoing full-scale mobilization of the Ethiopian military to invade and occupy the region of Tigray, home to the TPLF cadre who previously ran the country until 2018, has been chilling in its swiftness and brutality, with horrific humanitarian consequences. While embracing the neo-liberal language of Davos, Ahmed has proven he is unafraid to pursue internal control in a manner reminiscent of his imperial predecessors, no matter the suffering it might cause, and no matter who might be left behind.

Wyatt Constantine is currently a PhD candidate at the University of Leipzig in the department of African studies working on the political economy of labour in the horn of Africa.

[3] Blattman, Christopher and Dercon, Stefan. The impacts of industrial and entrepreneurial work on income and health: Experimental evidence from Ethiopia. June 2017.

Global capitalism and the scramble for cobalt

There is nothing past about historical land injustice