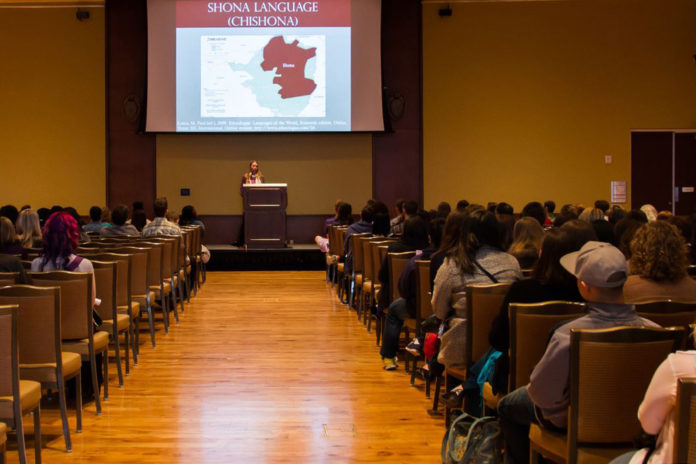 Zack Zimbalist asks who produces knowledge on ‘African politics’? Within political science, our understanding of politics in Africa is overwhelmingly shaped by non-Africans who spend most of their time far removed from Africa. Based on his paper in ROAPE, Zimbalist argues that this reality has serious consequences for the academic community, policymakers, students and citizens across the world.

Within the discipline of political science, scholarship and teaching on Africa faces a serious problem that demands urgent attention and redress. The problem is straightforward: the producers of knowledge on ‘African politics’ are overwhelmingly non-African academics located thousands of miles from the contexts about which they write.

As a non-African researcher based outside of Africa, I have come to realise more acutely the glaring inequality and inequity within the current system of knowledge production. As a graduate student preparing for courses and comprehensive exams in African studies and comparative politics, I became aware of the utter scarcity of African and Africa-based scholars in most of the assigned material. I also became well versed in the grand (hegemonic) theories in the ‘African politics’ literature (e.g. ‘neopatrimonialism’, the ‘rhizome state’), whose exclusive provenance was North American and European scholars based outside of Africa. Later, while conducting research in Mozambique and South Africa and then writing my dissertation, I discovered that most of the conceptual, theoretical and interpretive frameworks I employed were created by non-Africans. At the same time, as I interviewed and chatted with locals and read through materials written by Mozambican and South African academics, it was readily apparent to me that they possessed more revelatory theories and insight into how local politics worked in their communities and countries.

Let me be clear: I am not suggesting that only African or Africa-based scholars should speak to ‘African politics’. That would preclude me and many other dedicated researchers from conducting research and teaching on the topic. Instead, the aim of this blogpost (and my corresponding article which is available to read here) is to raise  awareness and motivate actions to rectify the large underlying power asymmetries existing within the system of scholarly production, which clearly disadvantage African and Africa-based scholars from producing and spreading knowledge.

What is ‘African politics’ and who are the ‘Africanists’?

In my article, I discuss how the category ‘African politics’ and the label ‘Africanist’ perpetuate the power asymmetries in knowledge production. For decades, writing oriented towards an artificial unitary ‘African politics’ has impeded a more accurate and granular understanding of political systems and behaviour across varied African contexts. This practice is linked to an ignominious history in which Africa and its diverse political and social configurations were homogenised, essentialised and distorted by Europeans and other Westerners. During this time, African voices and rich oral traditions and histories were locked out of knowledge production pertaining to their own complex societies and indigenous systems of local governance.

While much progress has been made in correcting these biased and misleading portrayals (owing to the work of Africans and non-Africans alike), the continued production of hegemonic theories speaking to ‘African politics’ remains deeply problematic. First, the dominant knowledge produced by non-African ‘Africanists’—of highly complex and historically contingent processes—is often simplified, incomplete, and loaded with external concepts and paradigms (not to mention languages). Second, it is largely disconnected from debates and research within African research institutes as well as other local African intellectual and political initiatives. As a result, African scholars and other African voices are at a substantial disadvantage to counter or refine the dominant discourses about politics on the continent.

The widespread use of the label ‘Africanist’ by North American and European scholars (but not by Africans) augments the power of such discourses and claims of Africa-wide expertise. Strikingly, many of these hegemonic theories and authoritative arguments about ‘African politics’ are generalised to all of Africa based only on single-country ‘field’ research or, increasingly, a field, survey or ‘lab experiment’ conducted within one African country. Note, for example, the stacks of books and articles published in leading academic presses and political science journals titled using the formula: ‘Democracy/Citizenship/Political Struggle in Africa: A Study of Country B’.

By contrast, there are troves of unpublished (or not widely available) research produced by Africans in Africa that demonstrate a detailed and sophisticated understanding of local political realities. Despite the superb quality of this work, it almost certainly does not reach top outlets or institutions of higher education outside of Africa, where students wish to gain exposure to diverse African perspectives as well as new concepts, theories, and epistemologies. What if, by analogy, students were required to study ‘American politics’ (nearly) exclusively from the perspectives and paradigms constructed by Africans (and written in African languages) who are based far from America? It would be equally startling and unedifying. Yet, this is the reality for the study of ‘African politics’ in many of the top universities and colleges in North America.

The ROAPE article that this blogpost is based on analyses authorship data from 1260 ‘readings’ (including academic and media articles, reports, book chapters, books, films and TED talks) from 24 undergraduate course syllabi for courses on African politics or Africa and international relations taught between 2014 and 2019 in the US and Canada. I find that only 15% of readings are written by Africans and only 9% of the readings are written by authors based in Africa. Also striking is the exclusion of women from course readings; only 15% of source materials are authored by women. These core findings illustrate the dramatic under-representation and exclusion of the scholars, researchers and activists who are closest to (and most familiar with) the political battles and actions being carried out across Africa. This stark hegemony (and exclusion of African voices) does not vary on whether the instructor is African or non-African, or by whether the course is taught by a man or a woman.

In parallel, the descriptive analysis of PhD comprehensive exam reading lists in comparative politics from a small sample of top US universities is also biased heavily against African and Africa-based scholars. For various topics within the graduate comparative politics reading lists, there are zero (or at best a few) books or articles based on African cases or written by Africans or Africa-based scholars. In addition, the relatively few books or articles about African cases are predominantly written by non-African academics based in the US or the UK.

Efforts to address the problem and how to strengthen them

In the ROAPE article, I conclude by highlighting some actions that North American and European academics and institutions could undertake to correct some of the inequities in the current research and publication system as well as in the classroom.

On an individual level, one first step we can all take is to critically examine our approaches to teaching and studying political dynamics in Africa. This examination should include questions such as who guides our research questions and designs, what methods do we employ to answer our questions, who do we interview and how, which documents do we review, which theoretical frameworks do we rely on, how do we interpret our findings and how do we seriously engage with external validity to other African countries. As teachers, we should also carefully weigh how we select materials and structure discussions so that African voices play a central role in shaping discourses about politics and governance. This process requires us to reflect on the institutions to which we belong and the resources at our disposal, as well as how we are positioned to contribute to knowledge production vis-à-vis other scholarly communities.

Apart from research and teaching, we can help change the nature of the publication system and how we execute our tasks as journal board members, editors and reviewers so that we remove structural barriers that disadvantage African voices and scholarly output (such as the privileging of particular epistemologies and methods prominent in the US and European academies and the incentivising of generalised proclamations about ‘African politics’, which Africa-based authors are less likely to make).

We can also leverage our individual actions to support and develop existing institutional efforts. Organizations such as the Working Group in African Political Economy (WGAPE) and the Evidence in Governance and Politics (EGAP) network could expand opportunities for Africans and Africa-based researchers and institutions to shape research projects. In parallel, additional assistance could be provided to enlarge social science training opportunities for African researchers, through initiatives like the Partnership for African Social and Governance Research, the Mawazo Institute’s PhD Scholars program, and the Center for Effective Global Action’s (CEGA) East Africa Social Science Translation Collaborative (EASST). Finally, greater support could be provided to institutions within Africa, such as the Dakar-based Council for the Development of Social Science Research in Africa (CODESRIA), which has several initiatives and is a leading publisher for research by African scholars in and outside the continent.

While these are some small piecemeal efforts aiming to address this problem, what is needed is a large-scale collaborative effort and the infusion of far greater resources (time, energy and financial) to correct for the substantial biases in who generates knowledge about ‘African politics’ and how it is generated. The system of knowledge production must be transformed so that Africans and Africa-based academics are driving research agendas and questions while shaping the theoretical frameworks, methods and data sources we use to answer them. Such an effort would extend the range of possibilities for learning about Africa, which are all heavily circumscribed because of the status quo hegemony of non-African academic institutions and scholars. In doing so, we can all help reconstruct the epistemological underpinnings of such knowledge in a way that is Africa-centred and grounded in the dynamic aspirations of Africans across the continent.

The full article can be accessed for free until the end of December here.

Zack Zimbalist is a visiting foreign professor in the Department of Political Science and International Relations at Tecnológico de Monterrey in Mexico. His research interests focus broadly on economic development, governance, political behaviour, and public opinion in developing democracies, mainly in Africa.

We encourage our readers also to listen to the LSE Citing Africa podcasts. There are two series both which explore knowledge production, decolonisation, data extractivism and development in Africa – the first series can be accessed here and the second here.