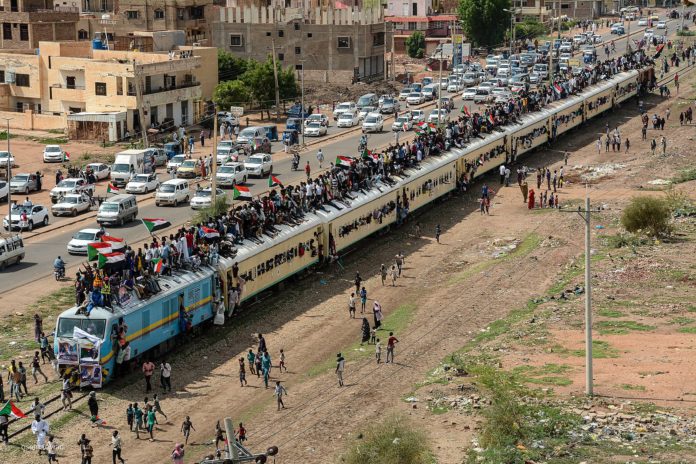 With so much going on in 2020, it’s easy to forget that just last year the world saw an upsurge in global rebellion. From Hong Kong to Chile to Ecuador to Spain and beyond, people took to the streets to oppose austerity and authoritarianism and to demand radical change. A wave of mass protest spread across North Africa and West Asia, called by some ‘the second Arab Spring.’ In April of 2019, months of mass protest forced Algerian President Abdelaziz Bouteflika to abdicate. Later that month, Sudanese President Omar al-Bashir was ousted in a military coup. In October, massive demonstrations emerged in Iraq challenging the sectarian political system. Similarly, Lebanon saw an October revolution sparked by a bill that would tax apps like whatsapp. Both countries forced the resignation of their respective governments. In November, people in Iran responded to an increase in fuel prices with mass protests that represented unprecedented opposition to the regime.

These five countries saw militant, sustained, historic popular struggle. The uprisings were a response to decades of political repression, neoliberalism, corruption, patriarchy, and sectarianism. In a notable shift from the 2010-2011 struggles, these revolts shared an understanding that a fundamental restructuring of society is needed to truly address the crises. However, despite their revolutionary character, these movements have received considerably less attention than the 2010-2011 ‘Arab Spring.’

A Region in Revolt: Mapping the Recent Uprisings in North Africa and West Asia edited by Jade Saab is the first and, to my knowledge, only comprehensive review of the uprisings that took place in Algeria, Sudan, Lebanon, Iraq, and Iran. Each chapter is written by activist-scholars from the respective country who provide an overview of each country’s specific political and economic conditions. They show that, far from being ahistoric spontaneous events, the 2019 uprisings built upon past struggles, by tracing the legacies of resistance in each country and showing how they have impacted the newly emerged movements.

The authors raise a number of important questions: How do we understand the 2018-2019 revolts? As revolutions? As uprisings? How are these recent movements linked to previous struggles? What will it take to sustain and develop the movements? What tactics were effective? How do socialists relate to protest movements in countries outside of the U.S. sphere of influence? How do we build cross-border solidarity? As we face common global foes, how can we strengthen our interconnected struggles?

This collection of essays provides an account of the 2019 wave of regional struggle from a socialist perspective that centers the agency of ordinary people. The authors model an approach to analyzing social movements and uprisings that takes as its starting point the workers and oppressed in each country, the ordinary millions who – when in motion – make revolt possible. Detailed exploration of various social forces and their historical development lays the foundation for understanding the power structure of each state.

In the case of Algeria and Sudan, the military has played a particular role in political life, and this shaped the trajectory of the uprisings. Following a bloody anti-colonial struggle against France, Algeria was left with the military as the only organized force in society. Sudan’s now deposed president Omar al-Bashir had come to power in a military coup in 1989. In both countries, the military high command had essentially ruled the state behind the façade of democracy for decades. Thus, when the presidents were toppled in April, the movements recognized this as insufficient to fully transform the state. In Sudan, madaniya (civilian rule) became the rallying cry. In Algeria, the protesters called for ‘a civilian state, not a military one.’

The confessional systems of government in Lebanon and Iraq have different origins but similar effects on ruling class formation. The establishment of an identity-based political system in Iraq following the 2003 U.S. invasion drove major sectarian violence. The government’s failure to address unemployment, poverty, and ongoing instability fueled the October revolution, as poor workers and the unemployed youth from the slums of Baghdad called for systemic change. Lebanon’s 1943 National Pact, which allocated government positions on a confessional basis, produced sectarian political parties that have long defended the sectarian political system. In this context, protesters calling for the resignation of all members of the government, chanting kellon yani kellon (all of them means all of them), represented a rejection of sectarianism. The uprisings in Lebanon and to a certain extent in Iraq were notable for their ability to overcome social divisions that had long been used by the governments to foster divisions.

Following the 1979 Iranian revolution, Ayatollah Khomeini and his followers established the Islamic Republic, which differed from the previous Pahlavi regime in important ways but maintained the statist character of the economy with strong ties between military and industry. Today, the Islamic Revolutionary Guard Corps (IRGC) led by Ayatollah Khamanei controls 80% of the Iranian economy, making it the de facto state despite the nominal authority of President Hassan Rouhani. While the regime historically used oil wealth for infrastructure projects and social welfare, more recently oil revenue has been funneled into military pursuits and weapons programs, with the rest embezzled by government leaders and their beneficiaries. This left ordinary Iranians in a dire economic situation, the conditions under which they revolted.

In all of the five countries surveyed, the Left was relatively weak prior to 2019 due in large part to regime repression. Official trade unions had long been co-opted. Most Left political parties and politicians had lost legitimacy due to decades of corruption and compromise. In the recent upheavals, people moved into action largely outside of the traditional organizations of the working class and the Left, and sometimes in opposition to them. The authors draw out initial thoughts on lessons learned from these experiences particularly on the questions of organization and strategy.

Arguably, Sudan’s uprising posed the greatest threat to the state. Azza Mustafa and Sara Abbas argue that Sudan’s primary lesson is ‘the importance of organizing and communication between different levels of the movement, the importance of building not one nucleus of leadership, but several.’ On a national level, the Forces of Freedom and Change (FFC), an alliance of labor, community, and rebel groups led by the Sudanese Professionals Association (SPA), forced the military into negotiations, resulting in a sort of dual power situation. Additionally, the main innovation of the December Revolution were the Resistance and Change Committees, neighborhood-level grassroots organizations that coordinated with the SPA/FFC and mobilized for protests, strikes, and mutual aid. The development of these committees was driven in large part by youth who distrusted political parties and elites.

In the four other cases, no single political entity representing the movement emerged. Hamza Hamouchene and Selma Oumari point to the leaderlessness and looseness of the Algerian uprising as its Achilles’ heel and argue for the necessity of coherent revolutionary organizations. In Lebanon, Jade Saab and Joey Ayoub identify sustained decentralized resistance as essential to continuing the movement and point to the need for coalitions that extend beyond electoral politics. Zeidon Alkinani explains that the lack of an organized movement coalition in Iraq was both the greatest strength and greatest weakness of the uprising. On the one hand, a horizontal, decentralized organizing method assuaged fears of a dominating leader, but, on the other hand, unity and collective action were impaired without an overarching united front.

In general, the experiences of 2019 point to the necessity of building long-term infrastructures of resistance to sustain social movements.

The anti-imperialist analysis put forward in the essays is a contribution to a vibrant debate on the international Left about how to understand and fight imperialism. The uprisings in Algeria, Iraq, and Iran explicitly took on questions of imperialism and colonialism. The historical background presented by the authors contextualizes each state’s relationship to international capital and military superpowers.

The Algerian uprising was deeply anti-colonial. Hamouchene and Oumari examine the contradictions that developed as the post-independence governments of Ben Bella and Boumediene pursued state socialist attempts at economic sovereignty. This strategy ultimately produced a state bourgeoisie with strong ties to the military. The authors show how the 2019 movement is ‘a continuation of the decolonial struggle, to fully realize its aims.’ As part of this phenomenon, the movement rejected a proposed hydrocarbon law that would allow multinational corporations greater access to Algeria’s resources. Unsurprisingly, counter-revolutionary attempts to curtail the uprising have been regionally supported by the UAE, Saudi Arabia, and Egypt.

The 2019 October uprising in Iraq was not the first protest after the 2003 U.S. invasion, but it was qualitatively different from previous efforts. It represented not only a struggle against the sectarian confessional system installed after the 2003 U.S. invasion, but also a rejection of foreign intervention in Iraq, especially by the United States and Iran, in a struggle for self-determination. The movement also saw a new Shiite Iraqi generation distance itself from Iranian political and military proxies.

Similarly, the Iranian protesters condemned Iranian regional intervention. Ayatollah Khamenei and his followers have long used anti-U.S. imperialist rhetoric to justify their rule and destroy opposition. But the economic strain of Iran’s military ventures has taken a toll with U.S. sanctions only compounding the misery. In this context, it is significant that Iranian protesters took up the demand for Iranian foreign interventions to end, echoing the call of popular protests in Iraq, Lebanon, Syria, and Yemen.

This cross-border solidarity among workers and the oppressed has lessons for the international Left, sections of which have been silent on the crimes of the Iranian regime or even openly supported it as a supposed bulwark to U.S. hegemony. In the volume, Frieda Afary emphasizes the importance of an internationalist approach that offers solidarity to social forces struggling against authoritarianism and despotism regardless of the state’s place in the world order.

A Region in Revolt captures all of the hope and inspiration of the 2019 uprisings. One of the most significant achievements of these movements is that, in the words of Hamouchene and Oumari, ‘people discovered their political will and realised they are in control of their own destiny.’ These were undeniably class revolts, fueled by anger over poverty, unemployment, austerity, and corruption. Yet, the people in the streets largely imagined themselves as citizens. The challenges of how to bring people into motion as workers, how to develop independent working-class organizations, and how to develop a political alternative to capitalism continue to be pressing. The COVID-19 pandemic has thrown another obstacle in the way. But there is no doubt that future struggles are on the horizon. A Region in Revolt helps us answer the question of what we can do now to prepare for them.

Emma Wilde Botta is socialist activist and writer based in Oakland, California. She has written extensively on the Arab Spring, the Gulf States, Iran, and US imperialism. Her writing has appeared in TruthOut, the International Socialist Review, roape.net and Socialist Worker.

Ethnonationalism, imperialism and the working class in Ethiopia