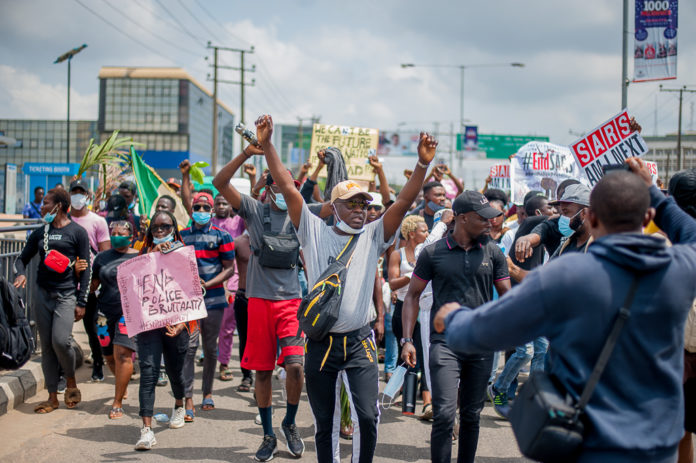 Adam Mayer writes how #EndSARS has seen a confluence of the anger of the working class, the unemployed, and the middle classes that are in the process of uniting against the country’s parasitical oligarchy. He argues that this movement and the response of the Nigerian left signals a historical shift in the country’s history.

In recent celebratory accounts and interventions, Baba Aye, Andy Wynne and Femi Aborisade have written about how the Lekki Toll Gate Massacre (20 October 2020) is a watershed in the history of social revolt in Nigeria. The massacre, a vicious attack by the army and the police on peaceful #EndSARS protesters that challenged police buritality and wanton state violence, targeted not only middle class demonstrators, but exposed the nature of Nigeria’s regime in an unprecedented way. Soon food riots, widespread government murders of activists in many states, and the freezing of the accounts of notable personalities around #EndSARS (the latter around 8 and 9 November), showed a confluence of the anger of the working class, the unemployed, and the middle classes that are in the process of uniting against the country’s parasitical oligarchy.

Add this to the fact that Omoyele Sowore’s 2018 presidential candidacy on the platform of a genuinely radical party, the African Action Congress (AAC), gave focus and visibility to systemic problems that had not been raised at the highest levels since the hopeful early 1980s and the tumultuous early 1990s. Suddenly, with Coalition for Revolution, the AAC, and #RevolutionNow, Nigeria has a radical revolutionary (from a capitalist vantage point) or radical reformist (looking at it from a Marxist-Leninist angle) cluster to challenge the president and his ruling oligarchy. This shift, along with some other observations regarding the trajectory of Nigeria’s development, brings me to offer a historical analogy.

Nigeria today claims the richest person of Africa (Aliko Dangote), and elite Nigerians are successfully contesting for positions in the global elite from the WTO (where Ngozi Okonjo-Iweala seems likely to be the new director general) to Netflix’s Dynasty series (where an all-American bourgeois dynasty is half Igbo – the better half?). There is a Nigerian projected for US Congress (Adeoye ‘Oye’ Owolewa as of 10 November 2020). Mainstream Anglo-Saxon feminism’s most important public intellectual is Chimamanda Adichie. It seems only a matter of time before Nigerians enter the private space race a la Elon Musk. Unlike in many other African countries where local elites are exclusively compradores, Nigeria’s bureaucratic bourgeoisie has significant economic power, one on a global scale.

I mention these facts not because I want to celebrate those on their own merit, but because I want to draw a comparison with the fate of the average person in the country: unemployed, living on less than a dollar (effectively fed by relatives and friends), deskilled, and hungry.

This dichotomy , this particular constellation of glamour and want, reminds this observer of a historically unique time: the early 20th century in that Eurasian giant, Russia. The country’s writers dominated Western literature in the second half of the 19th century and beyond, and had a unique imprint on the continent’s intellectual life. Its aristocrats were richer than the French ones. Its absentee landlords were a highly erudite, cosmopolitan elite that figure in Proust and Agatha Christie as lords and ladies of the early 20th century universe. Exactly at a time when Russia’s nascent proletariat suffered unspeakably under the double oppression of state and capital, and when its peasantry, deskilled by an obscurantist state and its new, capitalist employers, was the quintessential wretched of the earth, nearly ready to do away with a system that kept it so.

Nigerian (and African) writers entered the global literary market in the 1950s, and were an established powerhouse by the 1970s (see Ernest Emenyonu, Goatskin Bags and Wisdom: New Perspectives on African Literature, Africa World Press, 2000). In an academic study, I am demonstrating how the same decolonial shift happened in the field of guidebooks and travel literature (which until the early 2000s, was the exclusive domain of expatriates). Studies of decolonialized religion abound. More than just decolonializing, in many ways Nigeria’s cultural innovations are leading the way globally. Mowalola Ogunlesi, the young fashion designer who incorporated (street) Lagos petrolhead culture into her creations, is now with GAP. Olu Oguibe’s Kassel Obelisk is at the forefront of global conceptual art, as well as his art theory. Not only did Falz, the radical Nigerian rapper produce a fantastic take on Childish Gambino’s This is America rap song (This is Nigeria), but the original itself had been co-produced by a Nigerian producer none other than radical social scientist Claude Ake’s son (!).

Burna Boy’s Monsters You Made is a study in global capital’s local political economy for Africa: a scathing indictment of what the status quo breeds on the ground (bandits, rebels and extremist groups), but with a twist of hope in the end when the video’s rebel leader burns the neocolonialists’ mountain of money (the means through which they, and Africa, are permanently controlled since the Portuguese stepped foot on the shores of the continent). Such radical cultural statements, a return to Afrobeat sometimes even musically but definitely in terms of their social content, are appearing and gaining traction faster and faster in our days.

Does this mean that Nigerian music, Nigerian visual art, or especially Nigerian literature is already dominated by radical voices? Not yet. The fact that not every Russian novelist in the 19th century was a radical, is well known. Indeed, Dostoevsky’s Demons is perhaps the best written anti-socialist, anti-anarchist novel one might come across. Nigerian conservativism is also well known as a cultural force, as well as the elitism and savoir-vivre of Nigeria’s globetrotting elite. Some members of this elite may be classified as Nigeria’s absentee bourgeoisie with one leg in the home country (with oil rigs or other sources of income) and another in other countries (from South Africa through the UK, to the US).

My projection, given the successful launching of the AAP, and Lekki Toll Massacre, is that this kind of extreme dichotomy in the Nigerian world (globally) will likely lead to a new revolutionary phase for the country that might have repercussions not only regionally but beyond. Nigeria is arguably experiencing a phase when segments of its middle class, together with its suffering multitudes, are propelling a revolt, not unlike the shock of the (first) Russian revolution of 1905. That phase was soon followed by Pyotr Arkadyevich Stolypin and his counterrevolutionary advances, obscuring the tectonic shift that would manifest only in 1917.

It should not confuse the observer that Russia in 1905 was an autocracy under an anointed ruler and the ideological monopoly of the church, and today’s Nigeria is a liberal democracy in form because, importantly (as every one of Nigeria’s Marxist thinkers reminds us) Nigeria’s legal system does not only incorporate common law and sharia but accepts the ‘law of the land’ as a valid source of law. Meaning in many cases feudal ordinances and a feudal political economy and exploitation but also that the country’s procedural democracy hides what even American liberals such as former US Ambassador John Campbell call ‘the oga system,’ that is, a deeply flawed oligarchy that in tandem with international capitalism, underdevelops and suffocates the country.

Nigeria’s godfatherism, voter intimidation, thuggery in politics are not an anomaly: it is all systemic. #EndSARS protests have noticed this and they decided to challenge the rule of lawlessness in Africa’s sleeping giant through brave and radical action and praxis. Their sacrifice will not be in vain.

The self-same John Campbell (in Nigeria Dancing on the Brink) predicted (among other unwelcome options such as the country’s morselization, civil war, and a failed state) the appearance of ‘a Fidel Castro.’ This signals just how much a US (democratic) establishment analyst would dislike a new political economy for the country, one that would sever the kind of unilaterally dependent links that tie Nigeria to international capital today. It also may be a little misleading to imagine the appearance of a characteristically Cold War form of delinking anywhere, for today. A comparison with Omoyele Sowore might even add arguments for demonising this gentle politician who steers away from violent solutions at every opportunity.

But what we might say with confidence is that a new, revolutionary system of a people’s democracy absolutely cannot go on perpetuating the kind of neocolonialism that Nigeria’s oligarchic system is built on. The revolutionary moment (or more probable yet, the revolutionary period coming) will have to reassess and renegotiate not only the role of Nigerian capital versus international capital, but the very nature of the relationship between Nigeria and the West, Nigeria and imperialism.

This is where I see that a radically new paradigm may be born, and a new quality of an African revolutionary leader may emerge. A Leninist army major or trade unionist, or a party of the downtrodden taking power may seem unrealistic (and perhaps, for some, undesirable) at the current juncture. That said, the coming change has to address the root together with the branches. This means that it will also scare many who benefit from the current system in the obscene feast of inequity that is Nigeria today.

Adam Mayer is the author of Naija Marxisms: Revolutionary Thought in Nigeria published by Pluto Press in 2016. Adam teaches International Relations at the Széchenyi István University Győr in Hungary.