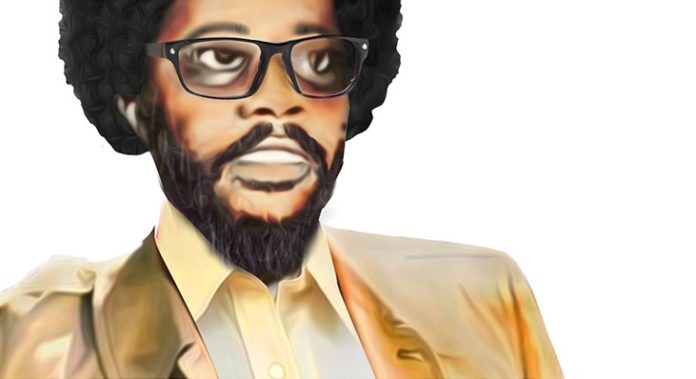 Join scholars, activists and researchers for an online conference on the insights into Walter Rodney’s phenomenal political and intellectual legacy that still propels today’s pan-African struggles.

Hosted by the Walter Rodney Programme, Pluto Educational Trust and the University of Cambridge’s Centre of African Studies.

Walter Rodney’s transformational impact on people’s thinking with the ground-breaking How Europe Underdeveloped Africa, skewered the dominant narratives on African and European development. The book challenged and disrupted centuries of historical lies on Africa, enslavement, empire, (neo)colonialism and reparations. The conference will also explore how that legacy can inform and inspire today’s Black Lives Matter movement. It will:

Interrogate the depth, range and impact of Rodney’s scholarship as an exemplar change-making African historian.

Feature Rodney’s legacy here and now, alive in the struggles of today’s workers, scholars and activists the world over. 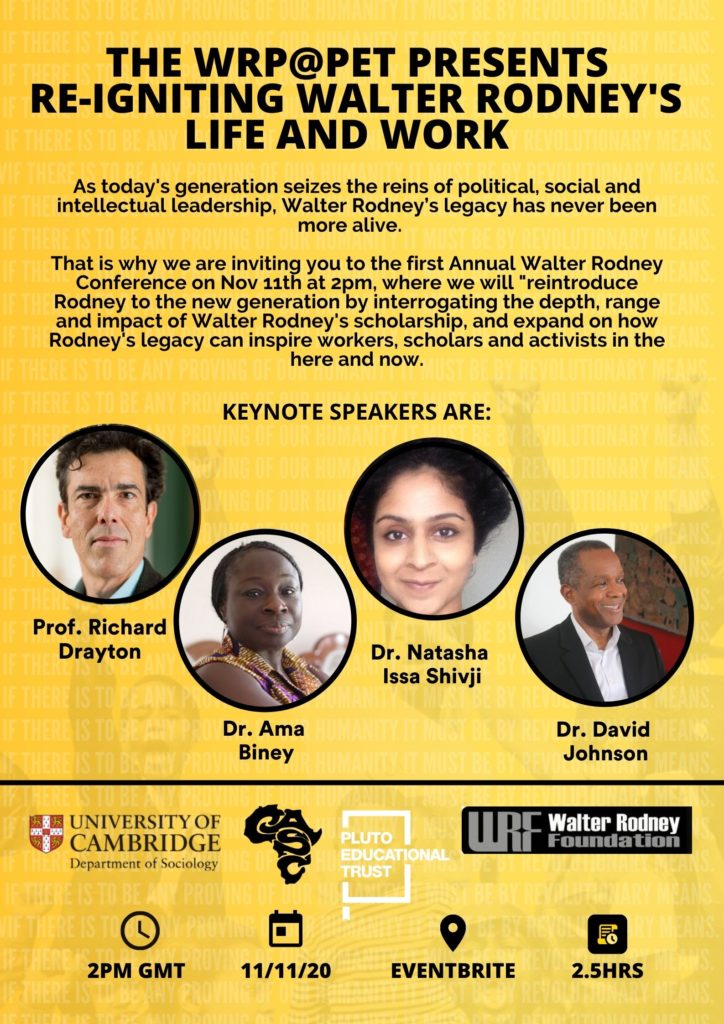 Richard Drayton was born in Guyana and grew up in Barbados. He has lived in Britain since 2001 where he has taught at Cambridge and King’s College London. He is a board member of The Walter Rodney Programme@PET

Ama Biney is a Pan-Africanist scholar-activist, with over 25 years teaching experience. She has taught courses in African and Caribbean history; the History of Black People in Britain and international relations in the UK and in Ghana. She is currently an independent scholar and in the Bikoist tradition writing what she likes. She is also a member of The Walter Rodney Programme@PET’s advisory board.

David Johnson transferred from social anthropology to a history major at the University of Sussex after reading How Europe Underdeveloped Africa and attending a grounding session with Walter Rodney, in a black community bookshop in North London. He went on to complete a doctorate in African history at the School of Oriental and African Studies, and taught for three decades at the University of Calabar, Georgetown University and the City University of New York. He was a founder member of the UK Support Group of the Working People’s Alliance, a platform through which Walter Rodney, as well as other creative and courageous comrades, dared to imagine and pursue another world.

Natasha Issa Shivji is the Director of the Institute for Research in Intellectual Histories of Africa in Dar es Salaam, Tanzania and a Postdoctoral Research Associate at the University of Cambridge. She has previously taught in the History departments at the University of Dar es Salaam and the University of Dodoma on courses focusing on African political economy, the agrarian question in Africa and Indian Ocean World History on the East African Littoral. Walter Rodney’s work remained a central influence for her in both her teaching and in her own research as work that withstood the test of time and remained formidable in shaping the discourse of how we write our history understanding the material realities of underdevelopment and imperialism and yet within a framework that is emancipatory and audacious.

Robert Cuffy is a well-known revolutionary socialist in NYC, and an effective organizer for Black Liberation. He is a member of the DSA Afrosocialist Caucus, a leader of the NYC Fight for Our Lives Coalition (which is part of People’s Strike, a National coalition organized by Cooperation Jackson), and a founder of the Socialist Workers Alliance of Guyana. He is also a leader of the DSA Labor Branch.

Zara Brown is a recent Politics and Quantitative Methods University of Warwick graduate. Her academic and activist interests in Caribbean and pan-African history exposed her to Walter Rodney’s ideas, revolutionised her thinking, and inspired her to found Warwick’s Caribbean Culture Society, among other things. She currently works as a social researcher and continues to engage with youth activism. She is also a member of The Walter Rodney Programme@PET’s advisory board.

Keynote (i) The Meaning of Walter Rodney

Keynote (ii) Reclaiming the African Past and Present with Walter Rodney

David Johnson shows why the ideas of this audacious youth left a legacy that still sends shock-waves inside and outside the academy.

Scholars and grass-roots activists share how Rodney’s profound influence on their historical consciousness and personal development inspires their current work.

You are welcome to email advance conference questions to wrpatpet@gmail.com.

The conference is happening with support from the Walter Rodney Foundation and the Sociology Department at the University of Cambridge.

Social Policy in Africa: The root causes of social problems

The workers’ movement, revolution and counter-revolution in Egypt