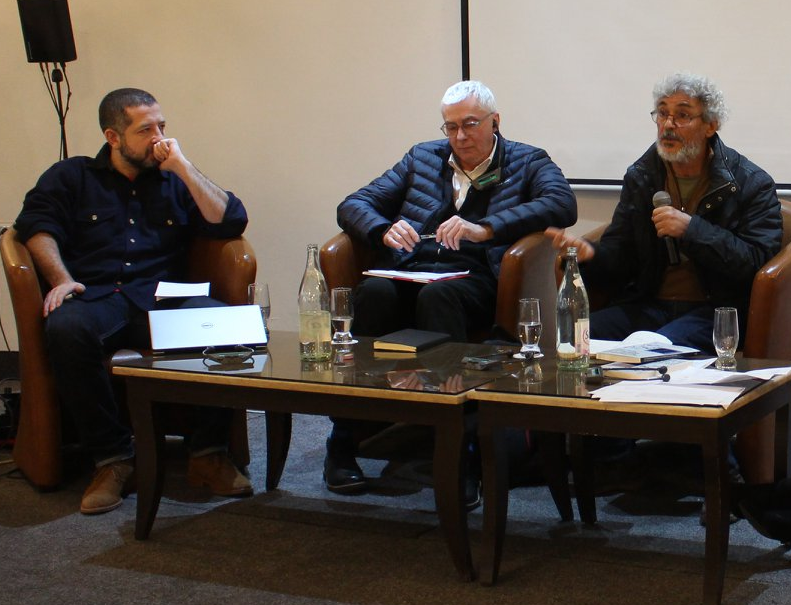 Some of you have heard or read me present on the Tunisian radical agronomist Slaheddine el-Amami, who in my view is probably the most important holistic thinker of the specifically technical-ecological aspects of rural, national, and popular development in North Africa during the 1970s and 1980s.[1]

There are many facets of Amami’s work to consider: the technology critic, the agronomic-regional state planner, the scientific experimenter, the intellectual historian. I would like to consider all of them, but to use them as a bridge to connect questions of epistemology and political economy as posed by the framework of this workshop.

One of the central intellectual and political problems in the development of Marxism has been a tendency for practice and theory to sidestep and therefore make invisible a central facet of accumulation on a world scale: the core-periphery, or North-South, or First World-Third World division. At the epistemological level, it relates to how interests determine knowledge and theory. On the one hand, this explains why the core-periphery distinction frequently disappears. On the other, it clarifies what kinds of knowledges and procedures for gathering knowledge are necessary in order to challenge the core-periphery relationship.

Theorizing from the South

This brings us to a question which dominated discussion earlier in the workshop: what does it mean to produce knowledge, and theorize from, or in relation to, or on behalf of, or with, or in solidarity with, the Global South?

Theories which come from the core, including Marxist theories, have often upheld the colonial division of humanity. Theories from the periphery have often challenged it. To theorize from the South, then, is not reducible to a human being theorizing from a southern country, nor a genetic or cultural identity. It is a form of knowledge production, sense-making, and abstraction which challenges international periphery-core flows of value alongside intra-national class epistemological architectures which support uneven accumulation and environmentally unequal exchange.[2]

This brings us to Amami. From the 1970s onwards, he carried out a program of basic research and a critique of Tunisia’s second ‘decade of development’, which interwove questions of whom was considered a trustworthy producer of agronomic knowledge, with how to develop Tunisia in a national-popular-sustainable style. He was, then, well ahead of his time in emphasizing the specifically ecological aspects of uneven development and the specifically ecological aspects of resistance to uneven development. In this way, he raised the question, in the economist Azzam Mahjoub’s phrase, of how to carry out a ‘peripheral convivial research’ program.

Amami saw clearly that a system of technology born of an imperialist epistemology produced a neo-colonial theory of development, which ensured uneven accumulation. Directly inspired by Maoism, Amami carried out several radical breaks from prevailing theories of development.

First, he rejected the universalizing and flattening tendencies of industrial and especially northern theories of development. He connected the kinds of thinking encouraged in the national schooling system and the ways foreign corporations could turn Tunisia into an arena for profit. What he saw was that neo-colonial capitalism’s conversion of Tunisia into a dependent arena of profit rested on the local production of neo-colonial ideology. If this was a bane, it was also a boon, because insofar as neo-colonialism rested on specific local structures of thought, it could accordingly be challenged by an attack on those structures and the institutions which reproduced them.

He analyzed the engineering schools’ contempt for the ‘traditional,’ and the technologies to which the slur referred. In disdaining over a millennium of precolonial polytechnics, such contempt became ‘in reality a colonial ideology favoring the supremacy of imported technology and wanting to disown any specificity to the colonized country.’[4]

Colonialism and neo-colonialism dissolved and disarticulated the national agricultural system. As it became oriented further and further away from feeding the population, the agricultural system could no longer protect the ecology. The bequest from the past, Amami contended, had been slowly shrunk: ‘Just some pockets and enclaves have been preserved from colonial destruction and constitute the true national libraries of Maghrebi agricultural technology.’[5]

Disarticulation and re-articulation also meant an ideological attack on these older forms of knowledge production. The new system, through schooling, ‘dangled the mirage of an urban life getting rid of centuries of prejudice and downgrading in which the rural world bathed. To ‘modernize’ is to erase and surpass all of the traditional systems of managing natural resources…The choice of techniques is almost never inspired by the local patrimony.’[6]

By tradition, specificity, or the local Amami did not mean nativism. He meant that places are different from one another: they have different levels of precipitation and different hours of sunlight and different temperatures and different wind patterns and soil profiles. Traditional systems meant the repertoire of technologies for managing that ecology – maintaining the ability to reproduce it while extracting what was needed for human well-being. Implicitly, Amami saw that specific ecologies had to be the rational basis for long-run sustainable planning.

Amami saw that northern – or imperialist-capitalist – ways of knowing, such as the presumption that ‘of course’ it was wise to shift to excessively mechanized and input-intensive agriculture, had to be countered, with southern, anti-colonial, and national-popular ways of knowing. In this way, they would distinguish and break from capitalist accumulation of value from above with a southern accumulation of ecologically embedded use values from below.

The transformation he envisioned had two elements. One was institutional – a shift in how people learned in the engineering schools. The other was epistemological – rooted in a popular-mass and implicitly ‘peasantist’ and Maoist conception of technological advance and diffusion, based on valuing rather than dismissing peasant knowledge. In the first place, this meant embedding research nationally:

However, this also, potentially, and more in spirit than in letter, had a class element: social liberation alongside national liberation. In the most general terms, this meant a populist project:

The Arab countries must encourage the promotion of a socio-economic ecology which analyzes the ‘rationality’ of local populations with a view towards injecting technological improvements corresponding to the aspirations and mutations of these populations and not to the sophisticated and very expensive technology giving the illusion of ‘miracle’ solutions.[8]

Here was a way of bridging the methodology of the laboratory with the methodology of the ethnographer, which rested on elaborating an epistemology which did not eliminate from discussion but elevated to the dais the capacity to think of local peasants and pastoralists. He called for an interplay of knowledges in which such practices were understood to have their own rationality and were even considered libraries.

On the other hand, Amami did not reject technology: he called for technological improvements.[9] And he did not reject the knowledge procedures of science, but insisted that local practices, and the norms and dreams of those populations, should serve as guidelines shaping engineering decisions concerning where and when to inject improvements.

Thus, the place of specialists is as boosters, refiners, and complements the creative national-popular productive practice of poor rural people. As Amami elsewhere wrote alongside his collaborator J.P. Gachet, this would entail a

Regional agricultural plan, decentralized and depending primarily on the mobilization of the creative will of peasants capable of ‘moving mountains’ and of defeating difficulties of all genres and of living with droughts in order to limit the havoc [that] could in this manner constitute a real tool of development in the rural world.[10]

Here was an argument resting on the poorest of the poor, especially southern peasants and pastoralists from ‘useless’ Tunisia, adding a muted regional-class element to the program for national development towards auto-centred accumulation. It was also based on an epistemological revolution, breaking sharply with the notion of the peasantry as empty vessels for Western knowledge which had been the calling card of Western neo-colonialism in Tunisia and its native collaborators.

What Amami presented, in sum, was a way of theorizing from the South which identified the North-South divide as not merely marked by value flows from the latter to the former, but a system of ideological and epistemological disciplining which sought to lock the periphery in an iron anti-developmental cage. His southern theory was meant to break the bars of the cage by making its prisoners the agents of their own liberation, an intellectual ‘return to the peasantry’ which is a possible basis not just for the liberatory development plans of yesterday, but also of tomorrow.

Max Ajl has a PhD from Cornell University and researches national liberation and post-colonial development theories in Tunisia. He is a regular contributor to ROAPE and roape.net.

[1] Samir Amin and many other Egyptian, Tunisian, and other Maghrebi social scientists excelled in other aspects of theorizing accumulation and development. Paul Pascon did exceptional work, like Amami, on Moroccan indigenous hydraulics. Amami himself was writing alongside a vibrant Tunisian conversation concerning appropriate development strategies for the Third World, including figures like Azzam Mahjoub, Abdeljelil Bedoui, Tahar Gallali, and others.

[9] It is noteworthy that in the same paper, he called for development of an Arab metallurgical industry.