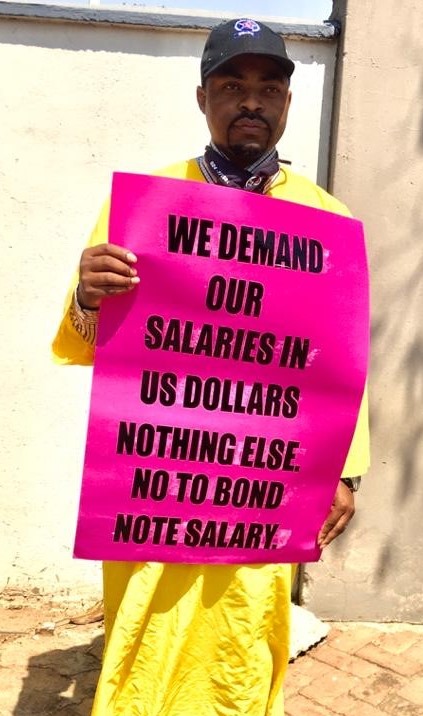 In a clarion call for support and solidarity for the struggle of teachers in Zimbabwe, Tafadzwa Choto argues that there is now talk of a general strike to solve the long-standing crisis in the country. Government and bosses have declared war on workers, vendors, students, youths and the poor. There must be a militant riposte.

Mugabe was removed from power in a coup in November 2017 after being in power for 37 years. Emmerson Mnangagwa took over as the president of the second administration with the backing of military and the former army general Constantino Chiwengwa becoming the vice-president. The new administration headed by Mnangagwa and his team has not solved the two decades of economic, social and political crisis. The current junta has continued with Mugabe’s legacy of brutality and austerity. As the crisis worsens there is anger across society with talk now of a general strike to solve the long-standing crisis.

Action speaks louder than words and it also produces results. Thousands in Zimbabwe are standing in solidarity with the call for united action with teachers as they are incapacitated by slave wages. The call for a general strike by Zimbabwe Congress of Trade Unions (ZCTU) in demand of US$ wages for all workers is also gaining massive support.

The teachers refused to return to school on 28 September.  The salaries paid to civil servants especially teachers are insulting, ranging between monthly pay-outs of US$30-US$35. According to Zimstat the Total Consumption Poverty Line (TCPL) for a family of five is ZW$7 425 per month to manage monthly expenses, far less than teachers have been offered.

With the economy now fully dollarized radical unions such as the Progressive Teachers Union of Zimbabwe (PTUZ) and Amalgamated Rural Teachers Union of Zimbabwe (ARTUZ) had remained steadfast, rejecting the Zim Dollar wages and demanding restoration of the October 2018 salaries of US$500 – US$550. Nurses and doctors have been on strike demanding the same.  It was therefore welcome that seven other teachers’ unions have now joined in a united front and declared that teachers won’t go back to work.

The unions should guard against being bribed by the government with false promises as we saw in 2019, a tactic to prevent other civil servants and the private sector joining in the action. The country faces economic implosion, now experiencing hyper-inflation of over 800%, workers’ wages decimated, the informal sector shutdown and 8 million facing starvation. Anger is growing every day and the teachers’ action could trigger a veld-fire of strikes that the country has not seen since 1996.

The junta government has already foreseen this situation which is why it has awarded the uniformed forces higher increases, with a junior soldier of less than one-year experience earning double the wage of a teacher with over 20 years’ experience. These forces will be used against picket-lines and demonstrations to beat up workers. This can only be countered through proper mass mobilisation by cross union rank and file strike committees and tactical organising as we saw during the successful August 1996 civil servants’ strike. Through proper mobilisation the uniformed forces will grow to fear the masses. 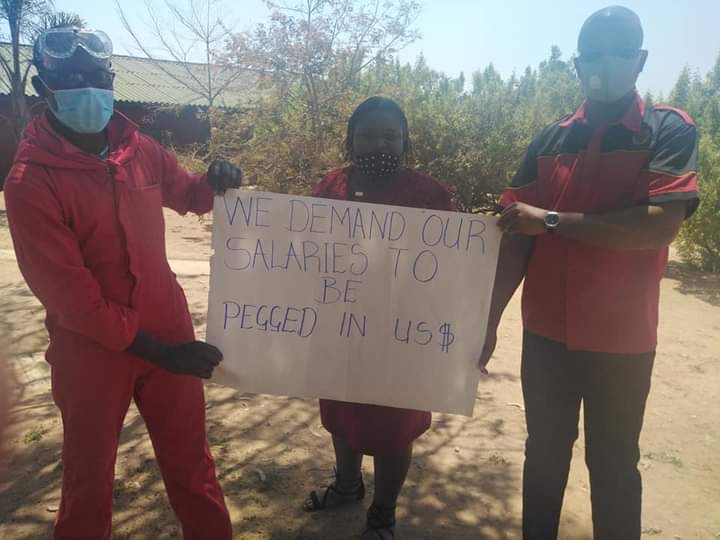 The state arrogantly announced school opening dates without serious consultation with teachers’ unions, who are key stakeholders. Worse still, not enough measures have been put in place to safeguard teachers and students against the further spreading of Covid-19. What the government is currently doing is putting teachers, their families and learners at risk. We join teachers in their call for:

Urgently expedite consultations with all teachers’ unions with a view to sharing ideas on the way forward before the opening of schools. The unions represent those who will implement the schools’ re-opening exercise.

Restore the purchasing power parity of teachers’ salaries pegged at USD$500 to USD$550.

Pay a Covid-19 allowance that is a product of negotiations or agreement between employer and teachers rather than the current ‘benevolence gesture’ dubbed presidential prerogative. Teachers are now Covid-19 frontline workers who deserve this.

Pay salaries that resonate with workers’ qualifications, experience and responsibilities.

Establish an inclusive Covid-19 Task Force to assess schools’ preparedness before re-opening. Ensure that schools are safe to receive learners and teachers and their health, safety and welfare are prioritised. The US$600 million promised by government hasn’t reached schools, whose coffers are dry with no fees since closure in March 2020.

Give teachers and learners enough time to cover syllabi and prepare for exams. The period of two months from 28 September-1 December 2020 does not adequately compensate for the lost six months since schools closed.

Although workers are incapacitated and unable to go to work it will be important for them to hold mass meetings in their regions or districts at least once a week to avoid victimisation and isolation which will result in some feeling forced to going back to work.  These meetings must be held in addition to online ones.

These meetings will strengthen workers giving them confidence to continue their struggles. The labour forums of 1997 and 1998 showed us it is important to collaborate with rank-and-file members in-order to sustain the action. Government is likely to threaten workers with dismissal and replacement from the large reserve army of unemployed thousands of graduates. To counter this, it is crucial to get the support of associations of unemployed teachers and, crucially, to get the Zimbabwe National Association of Student Unions (ZINASU), students and pupils to support their teachers’ action so that that any scabs will not be able to undermine the action.

This time the serious union leaders must not be hoodwinked to call off or end action because of non-binding promises by government, or because some leaders become afraid or are co-opted by the government to betray the struggle. Time for useless talks is over — it’s time for action. It is either US$ salaries or no schools opening. If some union leaders end up betraying the struggle let the militant and radical ones continue the action, especially mobilising with other civil servants like nurses and doctors to join.

Action works and the money is there. Because of the strike action by nurses and doctors the government hurriedly gave workers a US$75 allowance, after having steadfastly refused to do this for over a year. If we now have united action, the government can be forced to concede to the workers’ demands. Finance Minister Mthuli Ncube recently highlighted a budget surplus of ZW$800 million and that the wages ratio to revenue is now less than 50% from over 90% in 2018. This surplus was secured because of austerity measures that impacted on the working-class, especially the decision to make payments in the useless bond notes. Let that money now be used to pay living wages.

Government and bosses have declared war on workers, vendors, students, youths and the poor. The only language they understand is united mass action that will bring the country to a stand-still.  It is now time for workers to get mukoho wavo (their harvest) by a guaranteed living wage.

It is not only workers who are angry but also youths who are unemployed and tired of the current corrupt regime and want action. The call for action by the teachers, the largest section of workers, is a golden opportunity for other civil servants to come out and support the action. ZCTU too must mobilise for a national general strike and shutdown demanding restoration of October 2018 US$ wages for all workers, opening up for kombis (local transport) and the  informal sector but not an opening of schools, colleges and universities until they are compliant with WHO protocols.

On 23 September we saw an International Day of Solidarity with Zimbabwe conducted by unions and progressive movements in Africa and globally which showed the potential for international solidarity. But for that action to be truly meaningful, it is the workers and youths of Zimbabwe who must now move into action. Varombo Tamuka—Abayanga Sesivhukile! We have the Power… Amandla! It is finally time for united action!

Antonater Tafadzwa Choto is a well-known labour activist, researcher and currently a PhD candidate based in Harare. She was interviewed on roape.net and the interview can be accessed here.

ROAPE calls on our supporters and readers to text and WhatsApp solidarity messages to the following strike leaders: