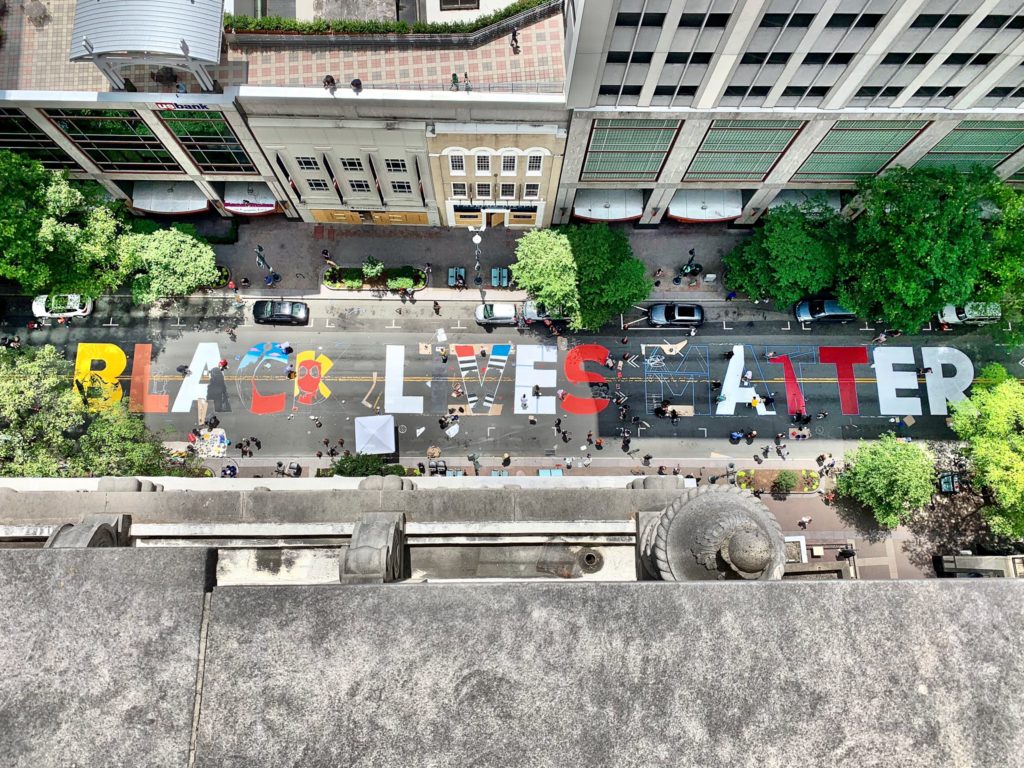 The Rise of Black Lives Matter Movement: Some Lessons for the (Africanist) Left

ROAPE’s Tunde Zack-Williams discusses the extraordinary Black Lives Matter movement in the context of African studies and the radical left. For those of us who work, research and study in the narrow discipline of ‘African studies’, including in ROAPE, we need to break down the disciplinary barriers between continents and people – we make a number of relevant key texts from our archive available below the blogpost.

In an article published in ROAPE in 1995 entitled, ‘African Development and African Diaspora: Separate Concerns’? I questioned the disciplinary gulf between development studies, which had almost completely ignored questions of race and cultural identity, on the one hand, and diasporic studies which tend to focus on cultural and racial links with Africa to the exclusion of questions of political economy. The article was also critical of perspectives which ignored the heterogeneity and variety of African cultures and experiences, whether for purposes of creating a caricatured colonial subject or for asserting an undifferentiated unity between Africans on the continent and those in the diaspora. I argued for an understanding of both the uniqueness and the commonality of African experiences on both sides of the Atlantic. I also called for an overdue dialogue between the concerns of African diasporic cultural studies and those of development theory in Africa itself.[1]

In what follows, I want to draw attention to the fact that attempts to come to terms with contemporary African dynamics, away from African diasporas, is actually counter-productive, if we want to understand how the diasporas work and how they yearn for ‘the home land’. Already, there is evidence of the vital role of remittances in African economic activities. In many African countries, remittances play a crucial role in government expenditure, as well as providing a catalyst for financial markets and the monetary policies of many governments, by removing credit constraints on the poor and improving the allocation of capital. The remittances transferred by migrant workers constitute a major source of foreign exchange for governments and relief for relatives who are often non-earners.

Yet, African studies in Britain, for example, continues to be insulated from diasporan concerns, reflecting the contrasting histories of both disciplines. Remittances are not the only contributions that diasporan Africans make to the development of the African continent. Whilst issues of class, gender, and regional inequality have informed debates and policies on development, as a rule development studies has carefully avoided a direct focus on ‘race’ and racism (with few exceptions). Instead, it has focused spatially in an unproblematic way on nation states, thought to be ‘developing’ or ‘undeveloping.’

To exacerbate the situation, the link between the historical legacy of colonialism and the condition of the black diaspora was soon abandoned by those who inherited the mantle of the discipline of the sociology of race relations- a potential locus of the study of diasporan concerns. Nonetheless, there was a common thread running through these two disciplines: the ‘universalist quest’. In the case of the new sociology of race relations it was premised on ‘assimilation’ and adjustment within black communities; in the case of development studies it was premised on a unilinear path to modernisation, i.e. Westernisation. Now, central to the analysis of both disciplines is the role of migration: internal rural-urban migration in one, and international migration in the other. It is the new sociology of race relations which borrowed from development studies its key theoretical tools for explaining migration, namely the push-pull, and bright light theories. These were soon incorporated into the explanatory paradigm of black migration to the metropolis. However, in plainer language Ambalavaner Sivanandan warned that concepts such as push–pull factors tell us very little since they do not take a holistic view of the world economy. Furthermore, he pointed out: ‘we (black people) are here because you (colonialists) were over there (in the colonies) first’.[2]

Now, Sivanandan, who was born in Sri Lanka, was a leading figure in the anti-racist struggle in Britain in the 1980s and 1990s and always described himself as Black. He related the above statement in a lecture, when he explained that this reply was by ‘an Asian’ worker, who was asked ‘why he chose to come to Britain?’ The respondent then replied: ‘Please Sir, because you (Britain) were over there first (in Pakistan as the colonial power) that’s why we are now here’. He described himself and his heritage as black, a nomenclature that can no longer be used to describe an Asian comrade in an anti-racist struggle, due to what Tariq Modood has referred to ‘political blackness’, i.e describing an Asia comrade as black, when indeed, the form of address was designed to define people of African heritage.[3] This idea of political blackness Modood argued had ‘provided activists and thinkers with a new way of understanding and organising around the notion of shared, non-white experience, identity and politics.’ This strategy had been used by other scholars and activists, such as Stuart Hall, Salman Rushdie and the Southhall Black Sisters.

One wonders how this changing position would have impacted on workers’ solidarity on the shop floor. Would the famous Grunwick strike of 1976-78 over trade union recognition have secured such solidarity of workers and activists? This strike, which was one of the longest industrial disputes at the time, was fought by women strikers, who were supported by large sections of the trade union movement. The dispute cannot be dissociated from the broad front of support by other trade unionists, other workers, students and the local communities the women came from.

One effect of the success of the changes discussed by Modood was to put a dampener on workers’ solidarity in the face of growing attacks on wages and the right to strike with the strong anti-trade union legislation of the Thatcher government (coming to power in May 1979) aiming to put an end to ‘Wild Cat Strikes’. For the working class, the industrial schism following the end of what Modood called ‘political blackness,’ was to weaken solidarity, with the result that groups and individuals can be easily dealt with by agents of the oppressive state apparatus. It is clear that colonialism was built on stereotypes of the ‘native’ and the African experience was the most pernicious. Presumably, this is why many took offense to the ‘B’ word (for ‘their’ people), which presumably was associated with the ‘N’ word – who would not want to extricate a people from such insolence?

However, most Black people remain voiceless, with their daily lives riddled with stereotypes, innuendos and ridicules – ‘we who have invented nothing’, as Aimé Césaire sarcastically put it. It is this kind of harassment Black people face in Britain and in the US, as Afua Hirsch has pointed out in The Guardian, ‘the racism that killed George Floyd was built in Britain’. As she observed, ‘what black people are experiencing the world over is a system that finds their bodies expendable by design’. She continues: ‘African Americans told us this when they lost Trayvon Martin, Sandra Bland, Ahmaud Arbery, Breonna Taylor, Eric Garner, Chinedu Okobi, Michael Brown, Aiyana Jones, Tamir Rice, Jordan Davis, Alton Sterling, Philando Catile and so many more’. Quoting the great Maya Angelou, Hirsch pointed out that: ‘…blacks have been living in a state of terror in this country for more than 400 years.’ Now, this is not a case of ‘Yankee exceptionalism’, for as The Guardian noted, ‘the UK is not innocent’: Jimmy Mubenga, according to the same newspaper, died when he was pinned to the ground by a security guard trying to deport him in October 2010. He has not been the only victim of this kind of homicide in the hands of agents of the state who should have protected them from harm. Other victims include, to name as few, Aseta Simms, Christopher Adler, Sheku Bayoh, Sean Rigg, and Mark Duggan.

The most recent assault on the African community was the Tory government’s decision to deport some members of the African-Caribbean community (known as the Windrush generation) who could not produce valid documents to certify their right to live in Britain.  Since most of these people had lived in the country for more than 50 years, many could not locate their documents to justify their right to be in the country, and they were deported to countries not visited in decades, causing them serious social and financial disruption.

The death of George Floyd at the hands of three Minneapolis Police officers who pinned him down on the ground with a knee on his neck for almost nine minutes outraged many people in Britain of all ethnic groups. For members of the Black community, Floyd’s death reminded them of similar experiences with their encounter with the police in the UK.

BLM is an international human rights movement originating from within the black community in the US through campaigning against violence, racial profiling, police brutality and racial inequalities in the criminal justice system towards Black people. BLM, which is opened to all races and is Black-led consists of over 150 organisations and is also active in the US elections and in ensuring that the family of George Floyd receive their just due. The clarion call of the organisation is to build a country (and indeed a world) where Black peoples’ lives matter in every aspect of society, including the workplace just like any other group. For those of us who work, research and study in the narrow discipline of ‘African studies’, including in ROAPE, we need to break down the disciplinary barriers between continents and people as urgently as ‘decolonising’ the curriculum.

Tunde Zack-Williams is Emeritus Professor of Sociology at the University of Central Lancashire. His books include Tributors, Supporters and Merchant Capital: Mining & Underdevelopment in Sierra Leone (1995); The Quest for Sustainable Peace: The 2007 Sierra Leone Elections (2008); Africa Beyond the Post-Colonial: Politics & Socio-Cultural Identities (with Ola Uduku) (2004); Africa in Crisis: New Challenges & Possibilities (2002). He is an editor of the Review of African Political Economy.

Further reading on Black Consciousness in South Africa; African studies and the diaspora; Karl Marx’s debt to people of African descent in Capital from ROAPE’s archive (free access to the full articles):