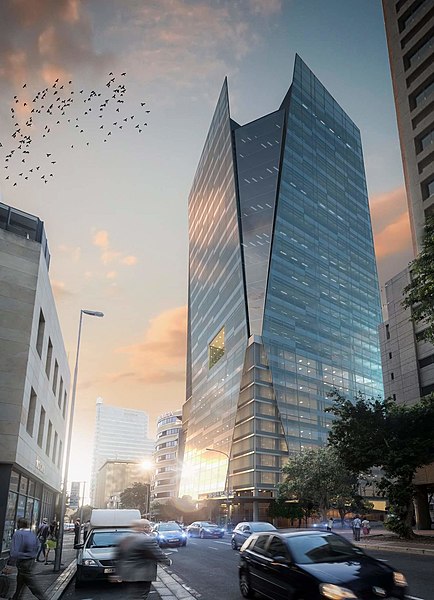 Discussing Africa’s relationship to global real estate capital, Tom Gillespie argues that we should not see African cities as exceptional to wider processes of accumulation and circulation but explore what we can learn about 21st century capitalism by studying its urban frontiers.

Africa is urbanizing rapidly and African cities are amongst the fastest growing in the world. Dramatic economic growth, rapid urbanization and an emerging middle class have generated growing optimism about Africa’s development prospects in the 21st century. Accompanying this optimism, many large African cities are being transformed beyond recognition by growing investment in real estate. Major economic hubs such as Accra, Lagos and Nairobi are witnessing a proliferation of new construction projects such as luxury apartment blocks, shopping malls and satellite cities. These transformations raise important questions about Africa’s relationship to global flows of real estate capital.

Africa has historically been excluded from global flows of real estate investment due to the perceived risks of investing on the continent, including widespread informality, ‘opaque’ market conditions and complex land tenure systems. This has led Tom Goodfellow to argue in ROAPE that real estate investment in Africa is dominated by domestic capital and the diaspora, and that the concept of ‘financialisation’ has limited relevance for understanding the transformation of the built environment in African cities.

While it is true that the financialisation of real estate in Africa has been limited to date, the perception that the continent is ‘rising’ has led it to be promoted as a ‘new frontier’ for global real estate capital. This frontier discourse, evident in the publications of global real estate agents, combines fears of risk and uncertainty with promises of opportunity for daring investors.

The establishment of several Sub-Saharan Africa-focused real estate funds, such as the London-based investment firm Actis, indicates that global investors have begun to take the continent seriously. Rendeavour, part of Russia’s Renaissance Group, is building new satellite cities in the Democratic Republic of Congo, Ghana, Kenya, Nigeria and Zambia. These self-contained private cities are often imagined as ‘eco’, ‘smart’ and ‘world class’ utopias that will enable global competitiveness for African economies. In addition, development finance institutions such as the UK’s CDC Group are investing in urban real estate projects in a number of African countries.

Despite limited financialisation to date, therefore, there are now deliberate efforts on the part of financial actors to integrate the continent more fully into global flows of real estate capital. Indeed, it is Africa’s peripheral position in relation to global real estate markets that enables it to be promoted as an exciting new ‘frontier’ for investment.

Various researchers have employed the concept of the frontier to think critically about the relationship between capitalism and its outsides. Amongst these, geographers Seth Schindler and Miguel Kanai and have drawn on Jason Moore’s research on ‘commodity frontiers’ to analyse capitalist expansion at the urban scale in Latin America and South Asia. According to Moore, a commodity frontier is a zone into which capital can expand through the violent appropriation of uncommodified resources. My recent research on urban redevelopment in Accra builds on this approach by exploring how state actors have sought to attract real estate investment through the commodification of state-owned land in Ghana’s capital. In the process, these actors produce an urban commodity frontier, what I call a ‘real estate frontier’, characterised by the transformation of state land into real estate.

The production of a real estate frontier is an attempt to overcome the limits to capitalist expansion posed by widespread customary land tenure in Accra. Disputes over ownership in the customary land sector have historically acted as a deterrent to real estate investment in the city. State actors have sought to overcome this limit and attract investment by providing access to litigation-free state land for development. In the words of one senior official from the Ghana Tourist Development Company, ‘our job is that once we have found an investor, we take away that headache of the investor going to find land (so they) don’t need to themselves hassle with traditional authorities.’

This approach has resulted in hundreds of acres of state land in Accra being allocated to private developers since the 1990s. The beneficiaries are typically local elites with government connections who have subsequently built large numbers of luxury apartments and villas in the central urban areas (or sold the land to others who did). This echoes Goodfellow’s findings about the influence of clientalism in shaping the built environment in Addis Ababa, Kampala and Kigali. In some cases, these local developers have partnered with international investors. For example, Actis are financing the construction of a luxury mixed-use enclave adjacent to the airport in partnership with a local developer. These high value properties are beyond the means of the majority of Ghanaians and are often leased by global corporations to accommodate their employees.

The government has also recently embarked on project to redevelop Accra’s waterfront into a spectacular tourism and leisure enclave in partnership with both local and international investors and architects, including London-based British-Ghanaian architect Sir David Adjaye. As such, the commodification of state land has enabled the real estate frontier to advance through the incorporation of new urban spaces into global circuits of real estate capital and planning expertise.

State actors justify the production of this real estate frontier in terms of increasing housing supply, improving the city’s tourist infrastructure, beautifying the urban landscape and creating growth and jobs that will benefit all city-dwellers. In addition, they argue that the lands in question are in need of redevelopment as they are underutilised and degraded. However, land privatisation has provided cover for the grabbing of high value state lands by elites, depriving the public of revenue in the process. In addition, shack dwellers on Accra’s waterfront were evicted without compensation in September 2014. Although a cholera outbreak was used to justify the eviction on public health grounds, housing activists and academics have argued that clearing the land for the waterfront redevelopment project was the primary motivation for the demolition exercise. As a result, various civil society groups have contested the processes of land grabbing and dispossession that accompany the expansion of Accra’s real estate frontier.

Despite efforts to produce a real estate frontier in Accra, Ghana’s post-2015 economic slump has led to falling demand for high-end apartments, offices and retail space. As a result, industry professionals lament an excess of luxury properties on the market, many of which remain empty (a phenomenon that has also been identified in global cities such as London). As such, Accra is characterised by an oversupply of luxury real estate in the context of an affordable housing shortage.

This unequal urban geography will shape the impacts of Covid-19: while spacious luxury apartments sit vacant, the virus is likely to spread rapidly in overcrowded low-income settlements where social distancing is difficult, access to clean water for hand washing is limited, and informal workers face a stark choice between staying at home and eating. As such, the pandemic has made more urgent than ever the need to address the extreme inequalities that characterise African cities and have been exacerbated by the commodification of urban space.

Although Africa has been, to date, largely peripheral to global flows of real estate capital, this does not mean that capitalism is absent from, or irrelevant to, African urban transformations. While I agree with Goodfellow’s assessment that domestic capital dominates real estate investment in African cities, the case of Accra’s demonstrates that a range of local and transnational actors (from state agencies to local developers to international investors) have actively sought to incorporate this peripheral city into global real estate markets, transforming its urban geography in the process. Rather than viewing African cities as exceptional to wider processes of accumulation and circulation, therefore, it is important to explore what we can learn about 21st century capitalism and its expansionary dynamics by studying its urban frontiers.