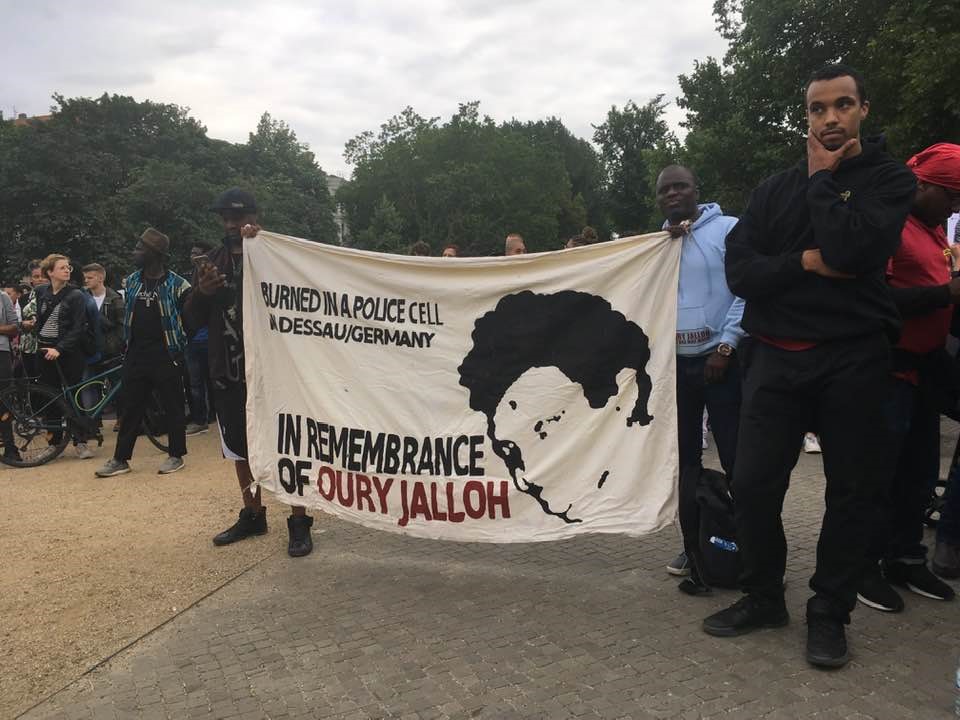 Heike Becker reflects on the Black Lives Matter movement on the continent, the development of radical art and how institutionalized racism and its root – capitalism – continue to kneel on all our necks.

The current protests against anti-black racism around the world have been nothing short of amazing. In July last year I was in a ‘Black Lives Matter’ demo in Berlin with a few hundred, mostly black, mostly young protestors who raised concerns about racism and police brutality in Germany. Being middle-aged, white and, mostly, based in South Africa, I felt somewhat out of place. But then, it also had the distinct feeling of being ‘at home’, and I was trying to learn by listening to black Germans who for once were the majority in the rally. The march snaked its way from the centre of the German capital to its main rallying point at Oranienplatz in Kreuzberg where a range of speakers reminded the crowd of some of the well-known and lesser-known deaths in police custody in Germany. Young people spoke about their experiences of being black German at university and on the sports fields. Sensing the energy of the march was fun but my sense was that shoppers and pedestrians hurrying back from work seemed rather astonished about the concerns and demands; onlookers seemed to consider them rather outlandish, partly perhaps because chants, placards and speeches were predominantly in English.

Less than a year has passed since this overcast Northern summer’s day, and, in the aftermath of the death of George Floyd the world is on fire. From the initial anger about the anti-black racist police brutality in the United States, across the world the crowds of BLM protests have grown exponentially in number and so has their anger.  So also have the ever more radical demands. There seems to be a growing sense, in the midst of the pandemic, that ‘this time around’ the world may change for better and that there won’t a return to the ‘old normal’.

Particularly astonishing, and in my reading most radical, have been the tremendous connections made between memory, colonialism and racism across Europe, and including the United Kingdom. From Bristol to Antwerp, colonial monuments have come under attack and been sunk, some quite literally. Amidst the violence and the pain there is also a great deal of creative hope. The young black boy standing atop the plinth where the statue of 17th century slave trader Edward Colston had stood, and triumphantly raising his fist, surrounded by the plethora of BLM placards, symbolizes ‘the future’.

In Oxford, the BLM protests have re-invigorated the English university town’s #RhodesMustFall movement. Formed in 2015 after the example of Cape Town’s successful movement to have a statue of British colonialist Cecil John Rhodes removed from the campus of the University of Cape Town (UCT), Oxford students took the cue from their South African students and campaigned for the removal of a statue from Oxford’s Oriel College. Unlike the South African campaign, their Oxford followers didn’t succeed at the time. Now the global BLM protests have inspired the Oxford campaign to renew their efforts to send Rhodes off and down the drain, along with Colston and the Belgian colonial King Leopold. On Tuesday 9 June a protest march brought 4,000 out in Oxford. Standing in front of a placard that read ‘Decolonise Oxford Uni’, Simukai Chigudu, in 2015 a doctoral student and a prominent voice of #RhodesMustFall Oxford, now an academic at the university, reminded the protestors powerfully that RhodesMustFall was started in 2015 in Oxford because of the students in South Africa who were tired of colonial iconography and white supremacy.

The most obvious example is a theatre performance, which gained widespread international recognition, and that was developed by young black artists who drew upon their experience of the protests. The Fall, which features a clever play on words in its tagline (‘All Rhodes Lead to Decolonisation’), premiered in October 2016 at the Baxter Theatre in Cape Town. The actors were eight graduates of the University of Cape Town’s Centre for Theatre, Dance and Performance Studies. They wrote the piece together and directed the performance themselves. Based on the actors’ real-life experiences, the piece offers a self-critical reflection on the hopes and fears of the 2015-16 student protest movements. But The Fall is by no means a typical agitprop production. In dialogue, interior monologues and songs, the actors deliver a nuanced exploration of the spontaneity and idealism, as well as the traumas that accompanied their political campaigns. This extraordinary workshop theatre production won the ensemble theatrical awards both at home and abroad (reviewed by Colin Fancy on roape.net).

‘The Fall’ was performed to considerable acclaim internationally. However, it was not the only remarkable theatre production that came out of the ‘Fallist’ movements. In March 2018, for instance, a play by the young theatre maker Nwabisa Plaatjie went on stage at the Baxter Theatre in Cape Town. Plaatjie’s multilingual play, ‘23 Years, a Month and 7 days’ was performed in English, Afrikaans and IsiXhosa, the three official languages of the Western Cape province. The play revolves around the experience of a young woman who escapes the abject poverty and hopelessness of her rural home to become a first-year university student in Cape Town in 2015. Drawing on the repertoire of movement theatre and extensive storytelling, Plaatjie deals, from a profound psychological perspective, with the young black female protagonist’s traumatic experiences. The focus is on the manifold forms of structural and everyday violence of impoverished black life in South Africa; she does not shy away from presenting the problematic violent moments of the protests, which became particularly poignant during the later phases of the movements in 2016.

The sophisticated theatre productions emerged in the aftermath of the 2015-16 heightened mobilisation. It is important to note though that the movements gave rise to tremendous creative potential right from the very beginning. This was partially expressed in semi-professional formats, such as Sethembile Msezane’s powerful performance that accompanied the removal of the statue of Cecil John Rhodes statue from the UCT campus on 9 April 2015. Elsewhere too, the young activists re-appropriated older expressions of struggle creativity. New forms of astonishingly nuanced protest poetry played a vital role, as evidenced by the pieces that appeared in the young protest movements’ first publications, such as the collection guest-edited by #RMF for the Johannesburg Workshop of Theory and Criticism in 2015. At Wits University in Johannesburg young performance artists took part in a live performance outside the university’s main lecture hall in October 2015, where they critically expressed their experiences at the ‘colonial’ post-apartheid university.

These are just a few examples of the multifaceted forms of artistic expression: some built on more established forms of protest theatre, but others also found innovative ways to express the new, different experiences of the generation leading the 2015-16 protests.

At this moment, only small protests have taken to the streets of South Africa in the outpouring of global BLM protest. Yet there certainly is creative insurgency. Much of the current protest in the country, which has just been hit hard by the spikes of a slightly delayed surge of the Covid-19 pandemic, has taken place on social media platforms rather than in the streets. Started by a few Cape Town high school students, instagram has become a key platform for anti-racist demands. A brilliant radical anti-racist memorandum has been circulated by the matrics (final year students) of Bishops, the city’s most exclusive private boys school. At the forefront of BLM South Africa in 2020 are the younger sisters and brothers of the ‘Fallists’. Those are teenagers, mostly black kids studying in private and public, former ‘White’ schools, who voice forcefully and eloquently that ‘Black Lives Matter at Home Too…’

Thus screamed graffiti on the walls of the swimming pool in my Cape Town neighbourhood for about a week in an insightful commentary on the global BLM protests. Then it was painted over last Saturday morning, reportedly by a fast-acting City of Cape Town. This did not only showcase the selective efficiency of the municipality, which does not act swiftly when called upon to solve problems such as water pipe bursts even in this long-established once white-designated neighbourhood. The slogan duly embraced South Africa’s histories of past and present. Observatory, Cape Town is one of the city’s oldest built-up areas, and the very site of the wall that called for attention to BLM in South Africa was connected to the earliest settlers and the history of slavery in the Cape, as commentators on the suburb’s Community Action Network WhatsApp pointed out.

With the eye on contemporary history, the slogan was equally poignant, raising concerns about the deaths of more than ten residents of impoverished black neighbourhoods at the hands of law enforcement and soldiers during the current Covid-19 lockdown. This happened in the Western Cape, governed by the centre-right national opposition DA (Democratic Alliance); in most cases it happened elsewhere in the country; Collins Khosa, a resident of Alexandra township near Johannesburg died after being tortured by soldiers in his own yard.

In South Africa, as elsewhere, race and class connect a history of slavery, racist oppression, and the consequences of the pandemic. No wonder, the City of Cape Town did not appreciate the slogan – ‘Black Lives Matter at Home Too…’!

I have written these notes as preliminary observations and thoughts about the global trajectories of the politics that powerfully counter the memory-colonialism-racism nexus as I am embarking on the major research phase of a project, long in the making, on memory activism and anti-racist politics in Germany and the UK. This follows on my long-term activist-research on memory politics and social movements in southern Africa.

Heike Becker focuses on the politics of memory, popular culture, digital media and social movements of resistance in southern Africa (South Africa and Namibia). Heike is a regular contributor to roape.net.