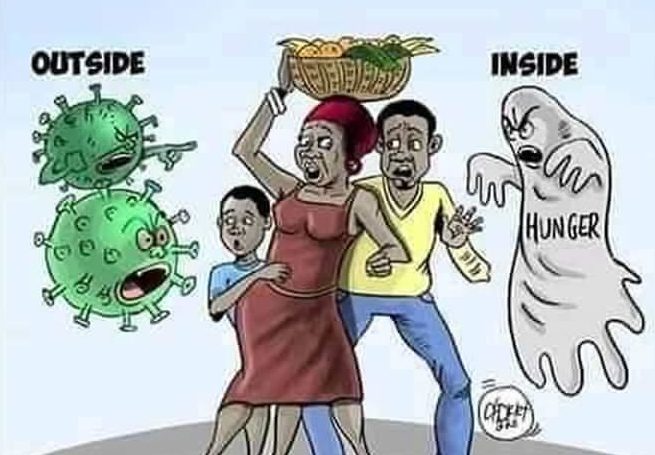 During the West African Ebola crisis, outreach became critical to combating the spread of infection. In Sierra Leone, Laura Martin writes, comedians proved to be a popular and effective means of spreading these messages, as well as offering relief to quarantined homes. Comedians thrived during this period with regular employment opportunities by local government and NGOs.  Today, comedy outreach is becoming re-popularised as Sierra Leone fights against the Covid-19 pandemic. Yet, being a ‘legitimate’ respectable comedian in Sierra Leone is bound up in social and political capital entirely unrelated to comedic talents…

Sierra Leone is not a country particularly well known for its comedians.  Unlike Nigeria and South Africa, which have substantial global followings, Sierra Leone’s comedy industry is still relatively new and comprised of people with different backgrounds and life trajectories (although it remains almost entirely male-dominated).  Virtually no one does comedy as a full-time job. While for some comedians this is because it is not consistent enough work, the industry can be very lucrative for the more well-known names. In theory, a sign of success is the ability to have a steady income by making a living solely as a comedian.  In Sierra Leone, however, this is not the case. Successful comedians maintain other careers in order to legitimise their comedic status as ‘serious.’

Humour itself is a universal cultural characteristic, both used for ‘formal’ entertainment and as part of interrogating the prospects and challenges of everyday life.  Both ‘formal’ and everyday humour provide an important medium to say the unsayable, offering an ambiguous space that (theoretically) allows people to speak about sensitive subject matter.  Humour in the African context has largely been analysed as a political tool, looking at how different types of humour can be subversive, or ‘weapons of the weak’, as well as how people cope in times of social instability and political turmoil. While the role of humour itself has been analysed, there has been less attention to lives and roles of comedians. 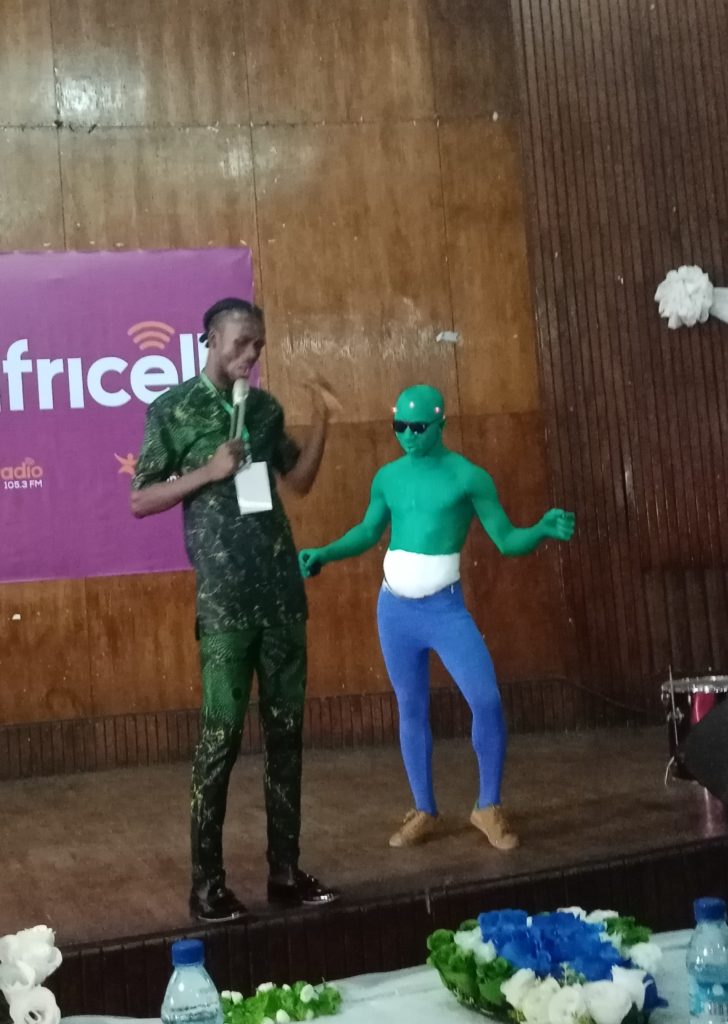 There is a rich history of comedic figures in both traditional rituals and oral tradition across the continent.  In Sierra Leone, traditional dances and rituals often entail hierarchy inversion or incongruities resulting in humour.  For example, as part of their coming-of-age traditional initiation ceremony for the Bondo society, women perform plays imitating and mocking men in ways that would not usually be acceptable. Oral traditions, such as stories passed on to young children also encompass humorous anecdotes alongside moral lessons, notably the characters of bra spider and bra cunny rabit.

A ‘formal comedy sector’ is, however, still relatively new, in most parts of Africa. Stand-up comedy really only began in the 1990s (South Africa being the main exception).  In Sierra Leone, comedy in contemporary popular culture started with a group called The Professionals, led by the characters Lord Bongo Johnson and Dandogo, who in the 1980s and early 1990s used to circulate comedy sketches on TV, radio and cassette tapes.  These men were very popular and well-connected, performing for political leaders and visiting dignitaries. In September 1992, as the civil conflict was intensifying, the comedy troupe went to perform in the US and ultimately stayed.[1] The comedy vacuum was then filled by another TV sketch comedy series, Wanpot, which was broadcast once a week and made up of various characters who did slap stick comedy sketches.  Although the main actors in both groups are all relatively well-educated, their comic personas continue to influence how comedy and comedians are construed today.

Comedians I have interviewed point to these guys – who often dressed up in funny costumes and acted silly – as one reason that pursuing comedy is not seen as a ‘serious’ career.  Many people remember these sketches and while they find them entertaining, comedy by itself is not seen as respectable. Another reason for this is because many aspiring comedians perform on the street, often wearing makeup or masks, asking people for money, also not considered socially acceptable, even by other comedians. During one interview with a Makeni comedian, a boy selling bread walked by and said hello.  The comedian later told me he had dropped out of school and now was a street comedian, described by the interviewee as ‘not serious’ and bad for their reputations. Such experiences feed into Sierra Leoneans’ notion that comedy is associated with ‘drop-outs’ and ‘people who are lazy.’  As another comedian said: ‘There is a perception that comedians are not serious because they have nothing better to do.  But you have to be serious.’

The types of comedic engagements that comedians take on though varies substantially, particularly compared to how it is understood in the Global North.  In Sierra Leone, comedians are entrepreneurial, often doing different types of gigs and performing through various mediums. There are those who do traditional ‘stand-up’ comedy, although there are no ‘comedy clubs’; rather, individual comedians will organise events (sometimes with their own funds and other times with company sponsorship) where various comedians will perform in a single evening.  Many Sierra Leonean comedians started as radio DJs and continue to MC events, working as both a DJ and a comedian at events, such as weddings, birthdays and beauty pageants.  They also often do advertising and radio jingles. Others do sketch comedy in groups, which has in recent years been marketed to governmental organisations and NGOs as a way of conducting development outreach, prominent during the Ebola epidemic and is becoming re-popularised as Sierra Leone only recently began their fight against Covid-19.[2]

The diversity of these events is reflected in its audience.  While radio shows can theoretically be accessed by anyone, events such as formal stand up shows or beauty pageants often have entry fees and thus attract a more middle-class audience. Some comedians have ‘toured’ up-country and entry fees are more ‘creative’ – with participants offering food staples, such as cups of rice, palm wine or palm oil in exchange for entry. Outreach comedy activities will consist of diverse audiences of both rural and urban, wealthy and more impoverished populations, although attendees of these sessions in rural areas are still frequently the village elite – such as chiefs, teachers and religious leaders. 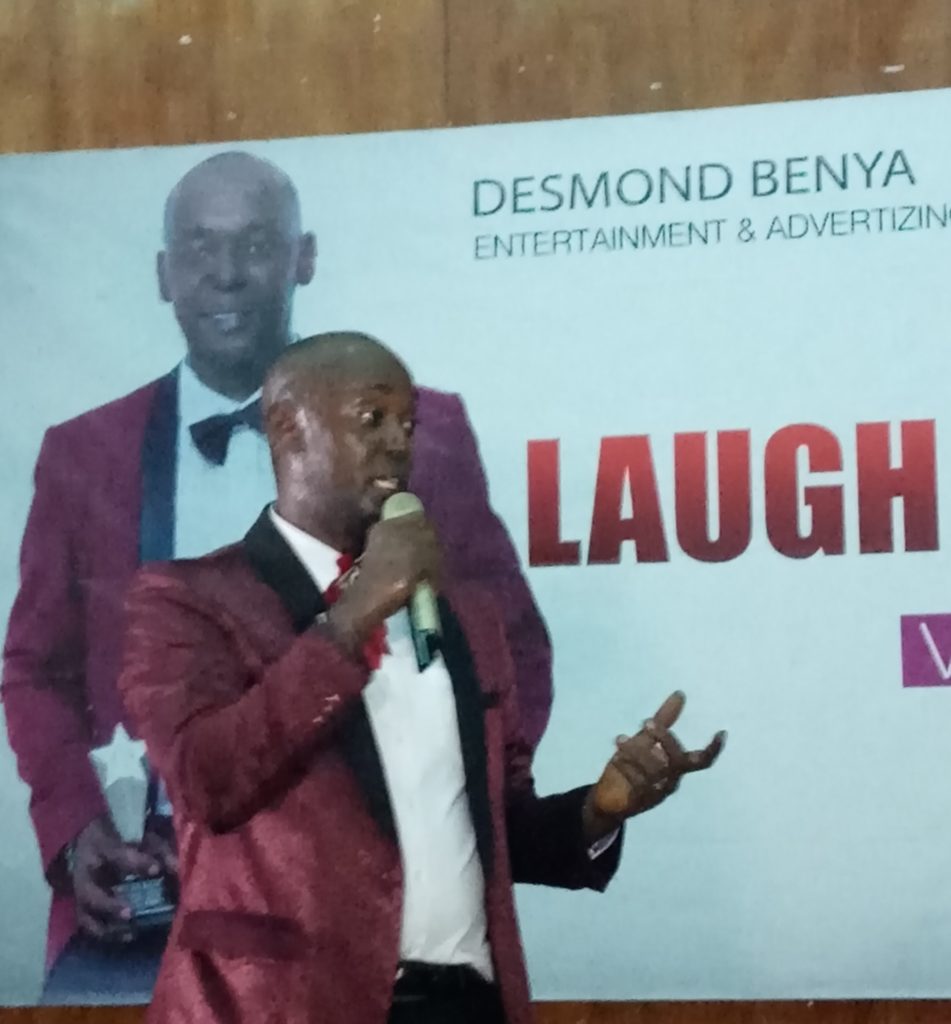 All of these gigs can be pretty lucrative and yet, many comedians maintain other jobs, both out of necessity and choice. For some lesser known comedians, the work is not consistent enough to be a reliable source of income and thus cannot actually be a ‘serious’ career.  One comedian I spoke with did not have a consistent job worked in construction and drove an Okada (motorbike) for additional income.  Even when they do perform, there is no guarantee of the agreed payment, as people organising events often treat the work as a ‘favour,’ again reinforcing the notion that it is not ‘serious’ work.  One comedian stated that he had performed at a beauty pageant the previous weekend but at the end of the evening, the organiser said the money ‘had finished’ and they were unable to pay.  In another instance, a man who managed comedians recounted an instance of a ‘big man’ inviting comedians to perform at a beach party (an hour from Freetown) and there was little payment and no food, drinks or accommodation for the performers, so some of the comedians stole items from the big man’s house as payment. In this instance, comedians, while perhaps creatively ‘obtaining payment’ they felt they were owed, simultaneously contributed to the ‘negative image’ of comedians as ‘not serious.’

Others comedians, however, continue to maintain ‘day jobs’ by choice.   Desmond Benya, one of Sierra Leone’s best-known comedians, has been a government employee at NASSIT (Sierra Leone’s pension programme) for sixteen years and has in this time obtained a Master’s degree in mass communications and become successful in comedy, at times being invited to events across Africa and Europe. He has also successfully managed to navigate different political landscapes over the past twenty years and as a result, has been able to maintain relations and government connections affording him further opportunities.

Even comedians I spoke with outside Freetown emphasised similar points. Jacob Hallowell (stage-name ‘top up’) who lives and works in Makeni teaches English at a private school.  His partner, Osman Sesay, has trained as an agronomist in Sierra Leone and is currently finishing his degree at a teacher’s training college. These men also emphasised the need to be ‘seen as serious and respectable’ in order to have their comedy taken seriously and to do that, they had to pursue more mainstream respected careers unrelated to arts or comedy.

Once established though, performances can be a means of obtaining other work and career opportunities, regardless of your comedic ‘status.’ As Desmond Benya stated: ‘if you use the mic correctly, it opens doors for you.’ As a professional, he has benefitted socially and economically, by obtaining other jobs and investment opportunities, as well as getting high profile backing for his own comedy shows, such as mobile phone companies and national banks. Osman Sesay also obtained opportunities through a government minister who he met while doing comedy campaigning on behalf of the All People’s Congress (APC) political party who were in power at that time. He was later given the opportunity to travel to Benin to study fish farming as a result of this connection. Many comedians, like Jacob Hallowell, have also received endorsement and advertising deals with local companies, such as mobile phone providers.

Becoming a comedian in Sierra Leone is, therefore, tied up with a wide array of social and economic factors. While not a particularly ‘big’ industry, there are an increasing number of people (particularly men) trying their hand at comedy but as part of the industry expanding, certain comedians have had to simultaneously combat the image of ‘lazyness’ that has long accompanied their art.  In so doing, they have had to take on additional ‘professional positions’ for their comedy, and their personal image, to become legitimate.  Once in comedy and with a reputation, it can bring additional opportunities and social connections for the performer, however breaking into this is a challenge and being taken ‘seriously’ as a comedian an even greater one.  Socioeconomic and political elements, such as education levels, social networks and political affiliation can also contribute to one’s ability to be recognised and ‘brought into’ the comedy circuit. However, the ability to maintain other, more ‘respectable’ careers acts as key to being ‘seriously funny.’

Laura S. Martin is a Global Challenges Research Fellow at the University of Sheffield and is working on the relationship between humour, violence and gender in Sierra Leone.

[1] Sadly, Lord Bongo Johnson (Godfrey Manley-Spain) killed his wife and himself in 2010 in Dallas, Texas.  Dandogo (Donald Nat-George) still lives in the US and in fact revived his character in his 2015 video entitled ‘Ebola – Back to Sender’

[2] Notably Freetown comedians have come together and produced ‘funny videos’, in partnership with the government, to spread messages about how to prevent Covid-19.