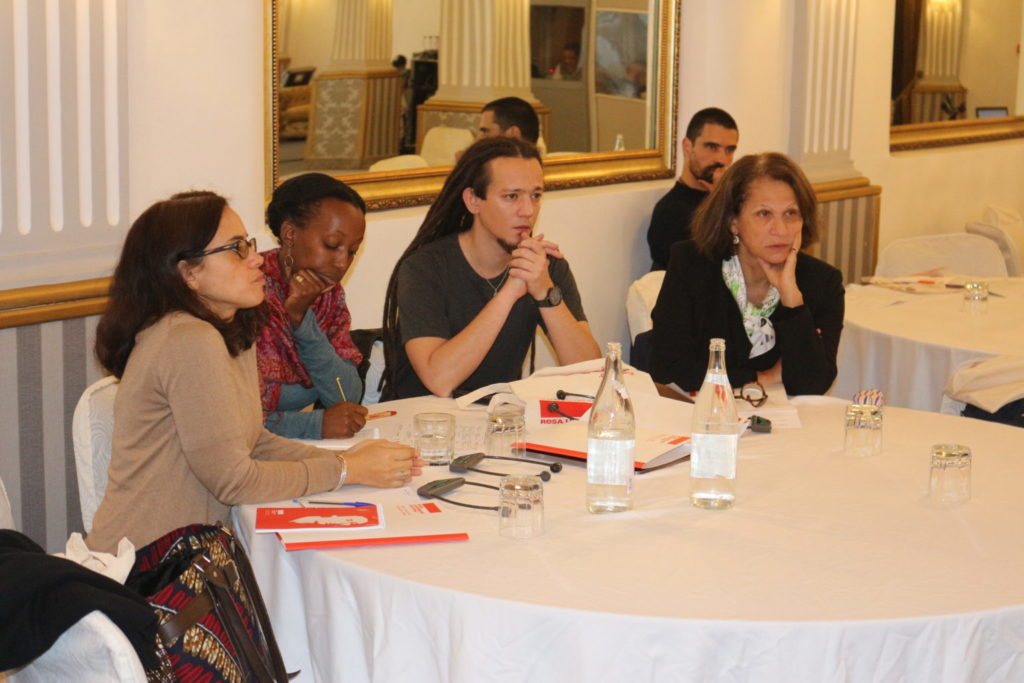 Considering the university as the institutional context where the majority of knowledge production continues to take place on the continent, Carlos Cardoso at the Tunis workshop argued that prominent intellectual and scientific production in African states today facilitate the drainage of information and marginalization of other forms of knowledge. Where, he asks, can we look for a new dream, a new critical and creative utopia, to move forward?

The history of human development shows us that since the beginning of time, knowledge has played an essential role in the way individuals view the present and build their future. As Boaventura de Sousa Santos  and Paula Meneses have argued, all social experience produces and reproduces knowledge and, in doing so, involves one or more epistemologies. It is through the knowledge they produce that women and men shape their relationships with nature and with other members of society. However, the cognitive subject – the human being – is also part of a collective, social and historical subject, and a particular social context and mode of production, which is, today, predominantly capitalist. Human knowledge produced by the social being is therefore not exempt from the tensions that emerge from this contradiction.

It is in this light that we can understand the function of the colonial sciences and institutions of knowledge production: to enable the various colonial powers of the time to establish and maintain a system of domination and subordination of the colonized peoples. The succession of acts and processes negating indigenous forms of knowledge production amounted to what the Portuguese sociologist Boaventura de Sousa Santos called colonial ‘epistemicide.’

However, colonial power never achieved its aim of complete domination. This same urge for knowledge enabled colonized peoples not only to analyze their shared conditions of domination and enslavement, but also to appropriate scientific methods of knowledge and put them in the service of their liberation struggles, building new utopias based on historical consciousness.

All knowledge is the product of a collective act that is stored by cognitive and mnemonic processes, transmitted by example, orally as well as through written and other visual mediums. Communities, social groups, non-governmental organizations and individuals in need of solutions to their difficulties are driven by processes of investigation, seeking knowledge by understanding these issues, proposing solutions and often producing answers that become theories and technologies.

In the colonial era the university became the center of knowledge production in the Global South, with its purpose shifting in the post-independence period as universities were repurposed in large part to serve a nationalist rather than colonial agenda. The epistemology that has given science the exclusivity of valuable knowledge has resulted in a vast institutional apparatus beyond the university, including research centres, ‘think tanks’, NGOs, etc.

My presentation for the Political Economy, Knowledge, Solidarity, and Liberation: From Asia to Africa workshop focused on the university, as this is the institutional context where the majority of knowledge production continues to take place in the Portuguese-speaking African states (PALOPs). What follows is a summary of the talk I gave in Tunis.

The university has a set of characteristics that vary from country to country and from region to region within countries. In one group of countries (Angola and Mozambique), knowledge production through the university began earlier, as the institution was established by the colonial power in the 1960s. In others, such as Guinea-Bissau and Cape Verde, it began after independence. Knowledge production in all of the PALOPs has evolved significantly over the last three decades.

Despite their weak development compared with other African countries, the social sciences in the PALOPs have not remained indifferent to the debate on the epistemologies of the South. Many PALOPS academics have actively engaged in building a paradigm and epistemology centred on the values and aspirations of their peoples, a process that was initiated by the liberation movements. There is a desire to contribute to the building of ‘epistemologies of the South’. The central idea to this epistemology is that we must move away from the perennial condition of being mere consumers of the thoughts and actions of others, and above all, have the courage to take the risk of being authentic producers of knowledge.

In Africa, the social sciences have undergone enormous changes with different impacts at the regional and national levels. As in Asia, these changes have led to the emergence of centres of excellence in social science research and the emergence of new research areas and themes. The work of Valentin Mudimbe, Claude Ake, Mahmood Mamdani, Souleymane Bachir Diagne, Achille Mbembe and many others testify to this resurgence of knowledge production. Advances in information technology around the world, and particularly in the Global South, are shaping the environment and conditions of knowledge production today. Crucially, they facilitate South-South dialogue.

International academic cooperation is, of course, a vital necessity for universities in both North and South. The increasing globalization of economies, the confrontation of common global problems and the need to find global solutions make such cooperation indispensable. However, such cooperation cannot be carried out blindly. We need to ask ourselves about the philosophical and political bases underlying collaborative projects. Far from putting an end to neo-colonial patterns of accumulation, prominent intellectual and scientific production in African states today, for the most part, facilitate the drainage of information and marginalization of ‘traditional’ forms of knowledge. In other words, they contribute to the slow but sure extraction and/or deterioration of all the scientific heritage and other forms of indigenous knowledge that could otherwise be put towards the aim of Global South liberation.

These so-called collaborative knowledge production projects often function like foreign ‘aid’ programs. Far from eliminating global inequalities they work to reinforce dependency of the periphery on the centre. Cooperation in this historical framework has been marked by a donor-recipient syndrome, in which the donor decides what to give and dictates the conditions of use, while the recipient is expected to accept these conditions unreservedly with gratitude.

International cooperation based on colonial ties does not solve African problems, but rather helps to deepen them. Genuine cooperation must aim above all at the development of African societies, through their educational and research institutions, and not at constituting a field for experimentation or propaganda with guinea pigs blinded by the funds available and committing African countries to another cycle of indebtedness. It is time to review the traditional terms of cooperation. Gone are the days when ‘cooperation’ was limited to granting scholarships to African students so that they could complete their university training in European universities, thus contributing to Africa’s ‘brain drain’.

Particular attention should be paid to mechanisms that strengthen the research component and theorization in African universities, for example through investment in the development of postgraduate programs so that African students choose to stay home rather than complete their PhDs abroad. The massification of higher education in Africa provided both opportunities, resulting in a significant increase in the number of institutions administering higher education and expanding access to formerly excluded communities, yet this increase in student numbers, and lack of investment, has impacted the capacity of universities to serve as research and theory building institutions..

Moving from a philosophy of aid to a philosophy of partnership can help to shift the focus away from philanthropic considerations. Clearly defining the responsibilities of partners in terms of material, financial and human resource contributions seems to be the right path. Partnership requires intellectual symmetry. This means that the partners must be convinced that the objectives of the project can only be achieved if both parties are willing to learn from each other’s experience.

As we have seen above, in order to deprive indigenous peoples of their capacity to produce knowledge, the colonizers had to commit another foundational act: to deprive these peoples of the capacity to make history. In his philosophy of history, Hegel theorized the alienation of Africans from world history prior to the establishment of colonialism on the continent, namely through the first great division of the globe, when Africa was left to the devices of a handful of European powers. The myths of ‘discovery’, encompassing territories already inhabited by populations with indigenous forms of social, economic and political organization, and of Europe’s ‘civilizing mission’ in Africa, were rooted in a similar rendering of history. And as if that were not enough, one of colonialism’s greatest crimes was to try to sweep out of the collective memory of Africans anything that might resemble the affirmation of their historical consciousness.

As Lopes professed, for Africans, regaining the right to speak, restoring access to that liberating verb, was a sine qua non condition for fully exiting the colonial condition. Amilcar Cabral likewise considered the liberation struggle as an act of culture, insofar as it is through culture that a people can advocate the recovery of the verb stolen by the colonists. This conceptual approach derives its relevance from the correlation established by Cabral between culture and history:

As the fruit of the history of a people, culture determines history at the same time, through the positive or negative influence it exerts on the evolution of man and his environment, as well as among men or human groups within a society or even between different societies (…). The break, whatever the ideological or idealistic characteristics of its manifestations, is therefore an important element in the history of a people.[1]

Aminata Traoré reminds us of the urgency in recalling and ‘weave again’ the ‘threads of hope’ expressed by those African revolutionaries from the era of anti-colonial struggle who sought to establish ‘a new historical and political consciousness.’

But where can we look for the articulating principle of a new sociability, a new dream, a new critical and creative utopia, to move forward?

We need to develop a hope of liberation that is the fruit of a historical consciousness rooted in and developed from the sense of the cyclical crises we have lived through all these years. Although the existing African university is by no means an inherent part of this liberatory project, a transformed university can be instrumental insofar as it contributes to the process of redeveloping the sense of service to the nation and to the people, and therefore to analyzing and addressing the new challenges and opportunities faced by Africans in the current moment.

Carlos Cardoso is a Senior Programme Officer at the Council for the Development of Social Science Research in Africa (CODESRIA). Before joining CODESRIA, Cardoso was the Director of the National Institute of Studies and Research (INEP), Guinea-Bissau (1998-2004). He also taught political sociology at the Lusophone University, Lisbon (Portugal).