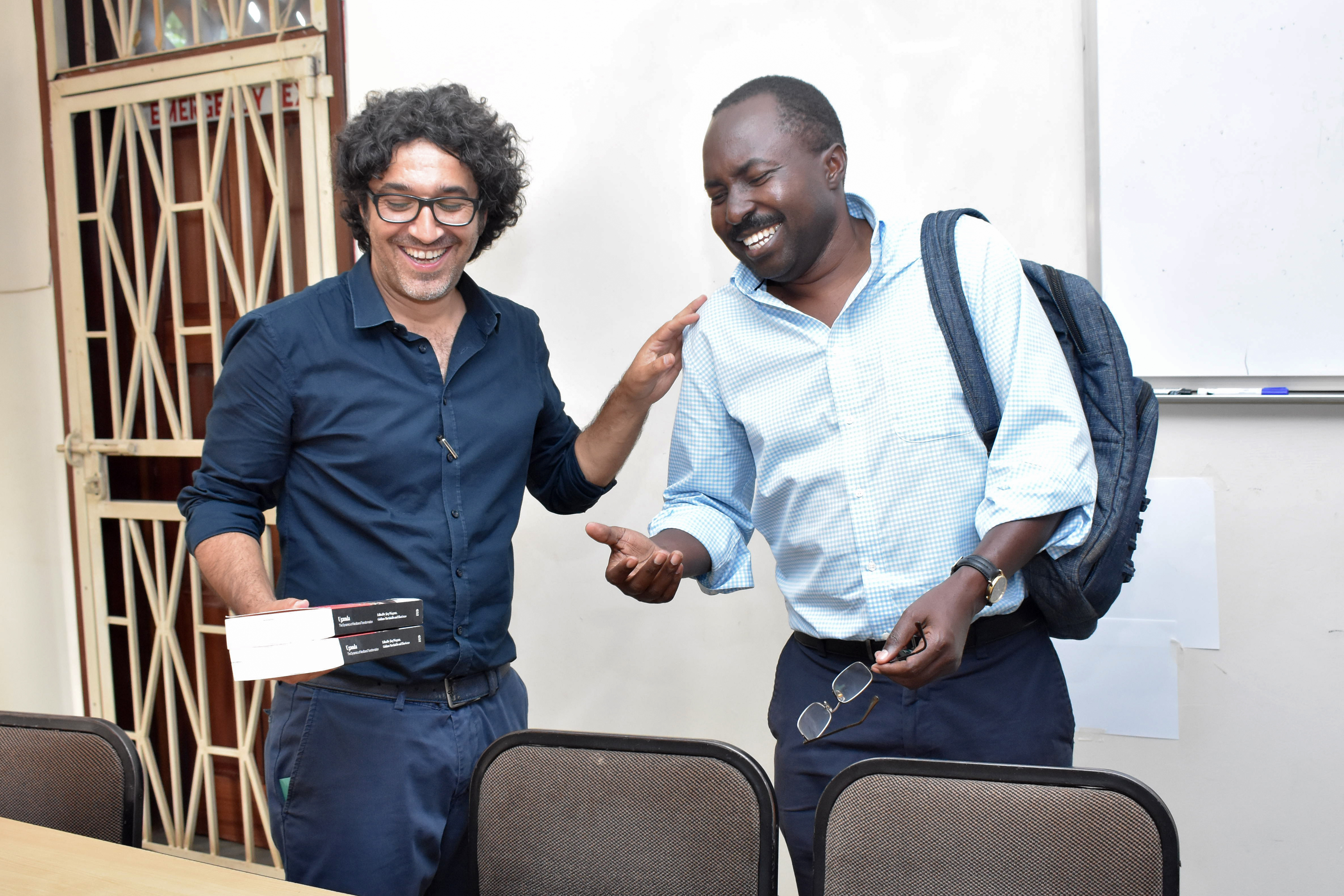 Reviewing a major new book on Uganda’s neoliberal transformation, Daniel Lumonya writes that the volume is ‘a deep and comprehensive engagement with the dynamics of development in contemporary Uganda.’ Speaking at the launch of the book in Kampala in April, Lumonya was joined by one of the editors of the book and an audience of scholars and activists from Uganda. The launch was filmed for roape.net and the footage is available in the blogpost.

I add my voice of congratulations to the authors of the respective chapters and to the editors for putting together a timely and provocative book. For far too long the conversation related to Uganda’s development, policy, impact and trajectories has been dominated by the World Bank/IMF, government bureaucrats, regime sympathizers, etc.  No critical, alternative voices have been heard, at least not as much as they should have been. The editors have so rightly pointed this out. The logic of the free market has been taken for granted. We have consistently been told that private sector led growth was inevitable and the only wise driver of progress. That markets allocated resources most efficiently; that the state was essentially a predator, it bred corruption, inefficiency and so on. Makerere University itself, to take an example, fell in line very early on. Marxist scholarship, from which Makerere University could have offered critical perspectives, was largely eliminated from the social sciences. Within Makerere University teaching the ‘market’ became the primary guide to course development, instruction, etc.

Not since Holger Bernt Hansen and Michael Twaddle’s Changing Uganda: The Dilemmas of Structural Adjustment and Revolutionary Change, have we had such a critical and comprehensive engagement with the dynamics and state of development in Uganda. And yet Hansen and Twaddle’s book, published in 1991, engaged a completely different historical context. We have lacked a deep and comprehensive engagement with the dynamics of development in contemporary Uganda, a huge gap that this books now fills. This book therefore intervenes in this debate in a late but nevertheless timely manner. The authors are drawn from a wide array of disciplines and review an equally wide range of case studies: health, forestry, water, race and culture. The book also brings together a quite impressive mix of Ugandan and foreign scholars. The authors have engaged these issues for a sufficiently long time, and one would hope that this serves as the first step of what will become a longer term project examining and debating these issues.

Three epistemological strategies in the book render it a powerful intervention. First the book treats the state and the market as co-constituted, rather than as separate spheres as we see so often portrayed in social science literature. Second, the book reinserts the agency, especially of Uganda’s political elite, into the analysis. Structural adjustment wasn’t simply imposed from above by the World Bank/IMF and received passively by government bureaucrats. Rather local actors, the political elite, were in fact willing and active participants in the making of structural adjustment. The book, especially the chapter by Ron Atkinson, makes this point so well. Consequently, and third, the book provides a thorough and comprehensive treatment of the interplay in Uganda of the internal and external forces or, as the editor’s note, ‘how the country’s position within the global capitalist economic structures of power and the international division of labor impact the country’s development and inhibit or facilitate its abilities to increase the material wellbeing of broad sections of the population.’

A book of this breadth and weight is inevitably going to raise some questions of validity and reliability in its arguments. While some of the chapters illustrate and support their arguments with the necessary empirical evidence, others could have done this in more systematic and robust ways. As a scholar drawing upon a critical perspective, I am unwedded to empiricism, given its obvious biases. And yet I do recognize that a debate such as this must be informed by empirical facts, if we should sufficiently engage with the architects of economic liberalization, largely mainstream economists. We have to engage with them on their territory if we are to confront these issues of such critical importance. The question of evidence is important because the book is attempting to associate the social crisis currently unfolding in Uganda, to economic liberalization and structural adjustment programs (SAPs). It is trying to establish a cause-effect relationship. It is perhaps unhelpful to single out cases of insufficient evidence but I point this out to invite readers of the book to review it with this expectation.

Economists will argue that the social crises upon which we base our claims existed prior to the onset of SAPs. Surely, we did have corruption in the 1960s through the 1970s. You also have countries that have liberalized that have a type of corruption much different to the one we see in Uganda, just as we see countries that did not liberalize as much, having just as much or different types of corruption. In addition, Uganda’s social indicators were not necessarily any better than they are now. What confounding variables do we need to eliminate in order to render the argument robust? How do we explain—and we need to ask these tough questions—that a single minister, now having more than he or his children or his grandchildren will ever need, deprives a whole community of infrastructure only because they want to enrich themselves? What tools and what frameworks do we need to engage with the manifestation of what seems like a deeper political crisis?

Further, one could argue that prior to the onset of SAPs, Uganda’s economy was after all moving down a path of failure. Were the import substitution strategies of the 1960s going to lead to an outcome any different to what SAPs have produced? Were those industries, largely built with and maintained by Western technology, going to work into the future and lead Ugandan communities to the Promised Land? In other words, are we looking far and deep enough? Isn’t a focus on economic liberalization distracting our attention from larger systemic issues?

A different but related issue touches on the experience of Economic Liberalization and SAPs on the ground. I note a tendency with leftist scholarship to be completely dismissive of economic liberalization/structural adjustment programs. Might we be throwing out the baby with the bathwater! I am not sure that a wholly critical perspective on SAPs captures fully the experiences of people on the ground. Take for example, the extent to which the institution of the local chief, what Mahmood Mamdani has called decentralized despotism, was democratized, the astronomical rise of civil society, the women’s movement, the human rights organizations, etc. These, seen from any perspective, were extremely welcome and progressive restructuring, emerging out of SAPs. Surely the popularity of Yoweri Museveni’s regime in the early to mid-1990s, one could argue, was a consequence of the extent to which these policies were seen as progressive relative to the previous situation.

Hence, we are faced with a key question, which I have not seen answered sufficiently in any social science literature on structural adjustment programs: Was the surge in civil society a direct or indirect consequence of liberalization? Were these outcomes intended or unintended consequences of economic and political liberalization? In other words, are the progressive politics we see in the mid-1990s a consequence of or despite SAPs?

It is important to reiterate that this collection is an extremely timely intervention in the debate about the history, trajectory, explanations of the state in which Uganda is at the moment. The book provides sufficient fodder for scholars, policy makers and politicians from either side of the aisle to engage in a lively and healthy debate. Teachers of development economics should find this book indispensable to their courses, as should the wider Ugandan readership, or whoever is interested in a synthesis of Uganda’s contemporary social dynamics.

The full introduction to the book can be accessed for free here.

Daniel Lumonya is Academic Dean for SIT Study Abroad, a US based study abroad institution. Daniel lectured for several years in the department of Social Work and Social Administration at Makerere University and consulted for several NGOs in Uganda. Daniel has recently completed his PhD at Cornell University.