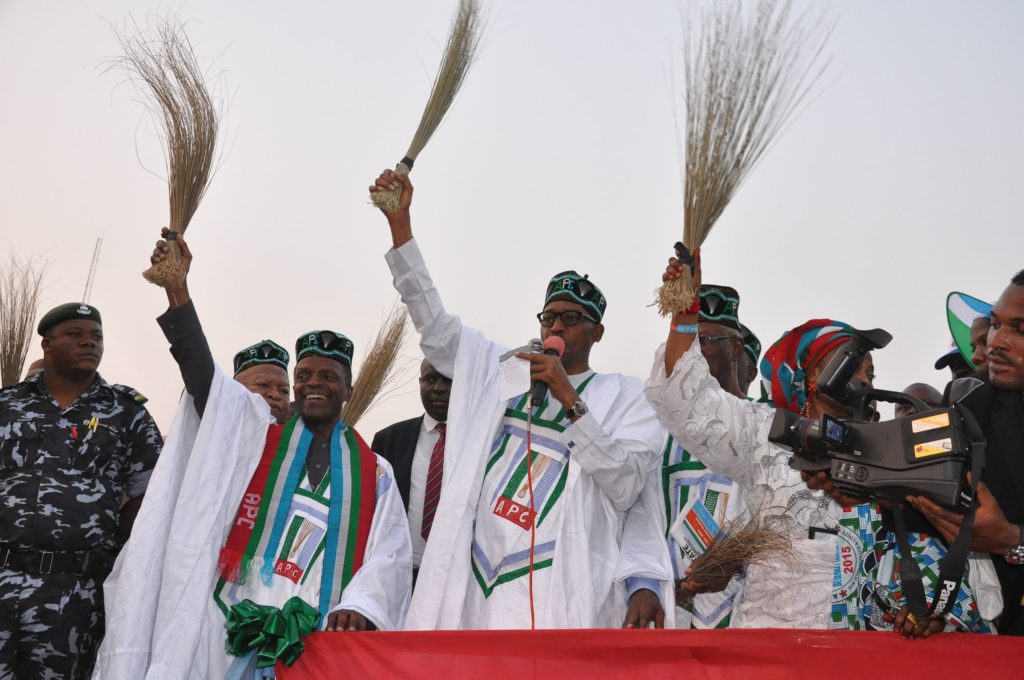 Postponed hours before the poll was due to open, Nigeria will now hold its election on 23 February, voting to elect the President, Vice President and the National Assembly. These elections will be the sixth since the end of military rule in 1999. Fabiawari Batubo and Andy Wynne argue whichever major party wins the prospects for the popular masses are not positive.

Muhammadu Buhari, the current president of Nigeria was elected in 2015. It was the first time in the country an opposition party had taken power through democratic elections since independence in 1960.  Buhari is now standing for re-election on 23 February.

In his first campaign, Buhari promised a fight against corruption that would fund increased spending on education, health and social protection.  These reforms were constrained by a fall in the price of oil exports, but also by the practicalities of politics – a real fight against corruption would have meant imprisoning leading members of his own party.  Buhari leads the All Progressives Congress (APC). Another major promise was to stop insecurity in the country, especially with Boko Haram in the north east of the country. The other major party, the Peoples Democratic Party (PDP), which won most of the elections since 1999, has gained some ground in the context of the failure of the APC.

These promises are now in tatters, but there are no clear realistic alternatives on the ballot paper – except for the other major political party who (mis)ruled for 16 years after the military era. No leading party is suggesting a proper fight against the twin scourges of inequality and corruption, despite the fact that there are minor parties offering some palliatives.  At best largely nationalist solutions are provided with promises of development and industrialisation, which would be hugely dependent on the world market and especially the price of oil.

The signs are not good. The fight against corruption clearly became a partisan affair as the Chair of the ruling party  – Adams Oshomole, a former trade union leader – said during an election rally in January that all the sins of the past would be forgiven for anyone that joins his party.  Then the president unconstitutionally sacked the Chief Judge in the weeks before election day. The new acting Chief Judge swore in 250 members of the election tribunals the next day.  These people are to hear the inevitable appeals over the election results by defeated candidates.

The government’s social protection plans were also perceived as being mired in corruption.  Money for petty market traders has been offered in the weeks before the election, an attempt widely accepted as an attempt to buy votes.  This followed claims of huge leakages in the school feeding program.  This program was claimed to be feeding around 12 million pupils a day, approximately the same number of children said to be out of school.  An important reform, but not enough in the context of education spending being lower than the African average.  Education spending would have to triple as a percentage of the total budget to reach the international norm of 20 percent.  A figure that Buhari had promised in his inaugural speech in 2015.  But in the first year of his administration the amount devoted to education actually fell in the federal budget.

The Nigerian Labour Congress (NLC), the main labour federation, has had an impressive  recent record of general strikes with over ten being held since the end of the military era in 1999. The most successful was in June 2007, when after only a four-day strike most of the demands were won. A 15 percent fuel price increase was halted along with a planned doubling of the rate of VAT (which until now remains at five percent). The privatization of two oil refineries also was prevented and civil servants gained a 15 percent pay increase. The January 2012 general strike and near insurrection was the high point of recent working-class struggles. Over the course of eight days, the general strike developed into the largest social movement in Nigeria’s history. Millions struck and mass protests were held in every major urban centre, from Lagos in the south, to Kano in the north.  As result, the planned increase in fuel prices was halved, although more could have been won if the strike had not been called off by the NLC leadership.

However, since the last elections there has only been a muted fight for an increase in the minimum wage that was due to have been introduced in 2016.  The NLC has only threatened general strikes to continue the negotiation process,  hampered as it is by sympathy for the ruling party.  As a result, the proposed wage increase is still crawling through the National Assembly.  If passed, this will result in only a modest increase, with the purchasing power of the minimum wage being reduced by a third compared to the time of the last increase in 2011. Again this is one of the lowest in Africa.

Unfortunately, the trade union leadership appear to be more interested in the re-election of the social democratic Buhari rather than the more elitist Atiku Abubakar, the Presidential candidate of the PDP.  In reality both parties are solidly committed to neo-liberal polices. The opposition are promising the privatisation of the state oil company and have little to say about the under-funding of the public education and health sectors.

Weeks ahead of the national elections, the three-month strike by university lecturers was called off. All public universities had been closed but the only gain was a further agreement with the government, when the major reason for the strike was non-implementation of previous agreements. Lecturers have a history of strikes, but these have not been active or militant enough to frighten the government into implementing the back to work agreements.

Health workers were also threatening strike action in the days before the election.  Once more their sector is grossly underfunded, and their demands are dominated by unfulfilled previous promises by the Government.  In 2012, the World Health Organisation estimated that low-income countries would need to spend a little over US$60 per person per year by 2015 to achieve the Millennium Development Goals.  The federal government of Nigeria currently spends only around US$7 per person.  As a result, each Nigerian doctor has to try and care for 10 times as many patients as the global average for their international colleagues.

Global warming is already having a significant impact, but its affects are also being exploited by unscrupulous politicians. In the north east Lake Chad is only five percent of the size it was in the mid-1960.  A major contributing factor to the Boko Haram insurgency.  It also contributes to the disputes and fighting  between herders and farmers in the middle belt. As the herders move south for pasture for their cattle and farmers encroach on traditional cattle pathways due to declining farm sizes resulting from population growth.

While the Niger Delta in the south could lose over 15,000 square kilometres of land to the sea by the year 2100 – resulting in 80 percent of the population of the region being displaced.  Last year saw major flooding across the country with hundreds of thousands of people suffering. Climate change is making this much worse and means that severe floods come more frequently. The last serious floods were in 2012 but  now, only six years later, we have seen flood levels that used to take place only every few decades.

Despite these horrors, the plans submitted to the United Nations Climate Change Conference held in Paris in 2015 by the Buhari government only included an undertaking to ‘work towards ending gas flaring by 2030.’  Gas flaring is the environmentally destructive practice of burning, or ‘flaring’, of natural gas associated with crude oil production – with the right infrastructure and investment the natural gas could be used for development needs in Nigeria. This activity has been classified as illegal since 1984.  It was to be ended again from 2008, but the former government actually stopped imposing fines for gas flaring from December 2014. The practice continues today across the oil-rich region of the Niger Delta.

Another major move in the fight against global warming would be for the majority of women who still depend on the traditional ‘three-stone fire’ to use kerosene or even cooking gas from the natural gas that would otherwise be flared. This would be of immediate health benefit to millions of women and contribute to reduced global warming by reducing the use of trees as firewood, and the destructive practice of ‘flaring’.  But the government has allowed the price of kerosene to explode and many people are now returning to traditional methods, and even burning polythene and other material, as they can no longer afford to buy kerosene.

As the crisis across Nigerian society escalates, the popular masses are searching for any alternatives – no matter how unrealistic or desperate these alternatives are.  Boko Haram in the north-east continues to attack local villages supporting and strengthening ethnic disputes.  Indigenous Peoples of Biafra (IPOB) in the south west are calling for independence of the former Biafra.  While cultists, kidnapping and bandits continue to feed into the general feelings of insecurity.

Yet in this context it is only further repression that is on offer by the two main parties.  For example, the massacre of 39 members of the Islamic Movement of Nigeria in the capital Abuja at the end of October last year.  Scores of IPOB members have been killed by the security forces and the police routinely torture and kill suspects.  Last year popular protest actually led to the disbanding of the notorious Special Anti-Robbery Squad.

The African Action Congress (AAC), led by Omoyele Sowore, is one of the few parties that could perhaps provide an electoral alternative. It does appear to have been gaining significant support in many areas. But with Sowore, their presidential candidate, being only one among many minor parties it is difficult to make his voice heard.  Sowore was a participant in many of the mass protests of the last few decades, yet even then the publisher of Sahara Reporters can stoop to nationalism and calls for a more consistent fight against Boko Haram. Sowore has  not provide clear and consistent support to recent strikes, perhaps due to fear of detention suffered by several opponents of the government.  Although the AAC are calling for a minimum wage of three time the amount currently being considered.

Though the outcome of the elections are too close to call, whichever major party wins the prospects for the popular masses are not attractive.  There is also widespread fear that vote rigging which will mean the results will not reflect the popular will. Political violence is increasing   as  the president and other party leaders being stoned at their own party rally. This is likely to escalate in the immediate post-election period, especially if the ruling party appears to lose. Military intervention cannot be completely ruled out.

Corruption and inequality are likely to continue in a country containing 20 percent of sub-Saharan Africans and where the governments are doing less than almost any other in the world to reduce inequality. The rich are rich in global terms, graphically illustrated in May 2017, when 26 executive jets were used to ferry guests to the wedding of a former military ruler’s daughter.  In contrast, there are more poor people in Nigeria than in any other country in the world. Change must come in Nigeria, though it will not arrive with the coming election.

Fabiawari Batubo is an activist and worker based in Abuja, Nigeria (and has been interviewed by roape.net here). Andy Wynne is a Senior Lecturer in Public Financial Management at the University of Leicester and a consultant who works extensively in Nigeria.