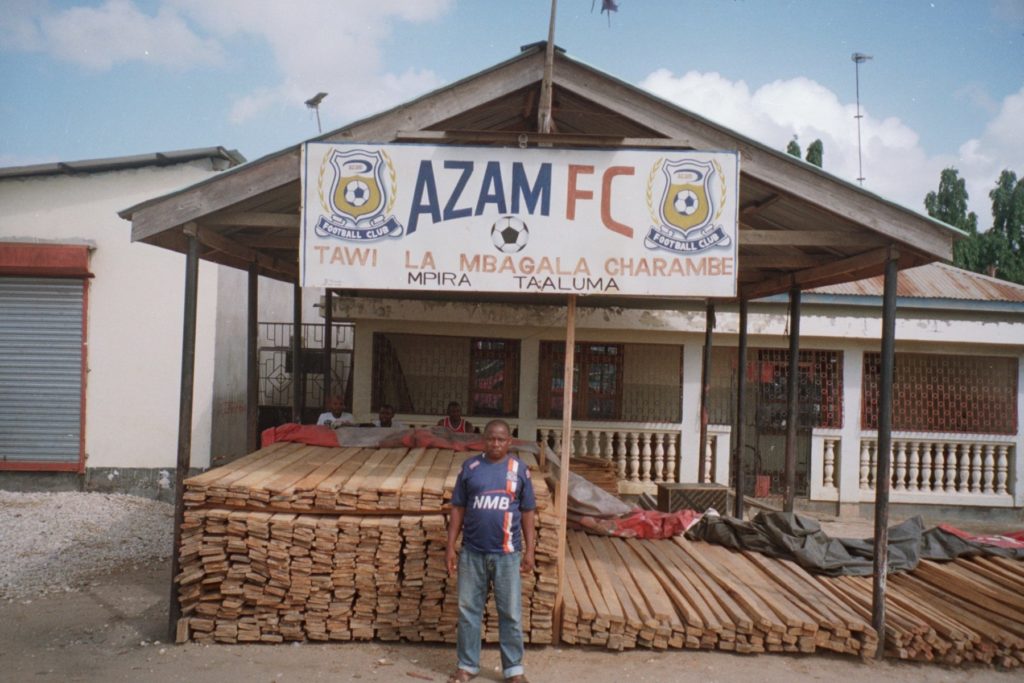 Adam Rodgers Johns explores the commercialisation of football in Africa. He argues that at the professional level the continent’s most popular sport provides us with fertile grounds for the analysis of capitalism in Africa.

The trend towards the commercialisation of football is not limited to the most powerful and competitive leagues in Western Europe but affects all regions of the world, including Africa. In recent years, the commercialisation of elite level professional football has affected the world’s most popular sport at unprecedented levels – from ownership, sponsorship, ticket sales to TV licensing. There are numerous ways in which Africa is linked to the global business of football. For example, the huge popularity of European, specifically English football, has significant commercial implications in terms of broadcasting revenue, merchandise and gambling.

There are a number of examples from the African continent where there has been an attempt to create a commercial football culture. The commercialisation of football at the professional level is impacting the continent’s most popular sport in unexpected and largely unexplored ways. Following debates in this series on Capitalism in Africa, developments in football represents an example of the unstudied capitalist phenomena of Africa, and provides an opportunity to reverse this trend.

The adoption of new business models is changing how we think about the global game. For example, within six years of being founded by the Red Bull drinks company, RasenBallsport (RB) Leipzig had achieved the remarkable feat of obtaining six promotions in six years to reach Germany’s top ranking, finishing as runners-up and qualifying for the 2017–18 UEFA Champions League in their first season in the Bundesliga. The City Football Group (CFG), despite being only five years old, already owns six clubs on four continents and is rapidly becoming one of the most powerful forces in the world’s favourite sport.

Earlier this year the Rwandan state announced that it had signed a controversial ‘Visit Rwanda’ sleeve sponsorship deal with Arsenal FC in a deal reportedly worth £30 million. The expropriation of African players to European leagues represents another area where Africa has been fully integrated into the networks of global capitalist sport. Transfer fees continue to inflate exponentially; the Senegalese footballer Sadio Mane became the most expensive African football player in history when he signed to Liverpool in 2016 for a £35 million transfer fee.

There has been a steady rise in the football academy industry in Africa as European clubs attempt to capitalise on the business of player development. Several top European teams have academies in East Africa, such as Juventus in Nairobi and Barcelona in Rwanda and Uganda. Following structural adjustment in the 1980s there was a lack of investment in sport, and therefore these academies were generally welcomed.

However, there are also private, non-affiliated academies that expose young Africans to the greed of non-certified agents and convince them to sign exploitative contracts. This has been likened to a form of neo-colonial exploitation; the export of raw materials, in this case African football talent, for consumption and wealth generation in the European core. Recently it emerged that Manchester City has been illegitimately funding an academy in Ghana. Profiting from the business of player development is the stated intention of the City Football Group: ‘It’s like venture capital in that if you invest 10 million each in 10 players, you just need one to get to the top who is going to be worth 100 million’ Ferran Soriano, the Manchester City CEO is quoted as saying.

Studying capitalism in Africa through the lens of commercial football provides fertile grounds for empirical analysis, for example in terms of merchandise, stadia development, privatisation of ownership, media and broadcasting, sponsorship, advertising, slogans, supporter behaviour (flags, songs, routines), players/supporters subjectivities and more. Analysing these areas allows us to explore the repercussions of the embedding of an ever more advanced spirit of commerce into previously less commercialised social realms. Moreover, football is a social realm with unparalleled levels of popularity and everyday engagement which provides further opportunity for investigation.

Several examples from East Africa exemplify this growing phenomenon. In Tanzania, football since independence has been synonymous with the rivalry between Simba FC and Yanga SC. These clubs are supporter-owned, relying on their supporters for funding, and have the support of the ruling independence political party, CCM (literally the Revolutionary Party). Following independence football was highlighted as an area of culture central to the project of nation building, leading to the national rivalry between Yanga and Simba.

However, the creation from scratch in 2007 of Azam FC by the Tanzanian corporation Bakhresa Group has disturbed this status-quo. Bakhresa Group are a multinational conglomerate whose products under their signature Azam brand span from marine transport to ice-cream, soft-drinks to television service provision. Azam FC’s motto – ‘Better team, better products’ – demonstrate their shameless marketing model.

Azam FC’s commercial model is praised by supporters and non-supporters alike as a positive move in the development of football in the country. For example, their vastly superior financial resources have enabled them to build their own stadium (whereas Simba and Yanga play their matches in the national stadium). They also run a training academy and can afford to buy players from overseas. This has enabled their rapid rise to challenge for the national title, at the time of writing, Azam FC sit at the top of the Tanzanian Premier League. This stark example makes clear the potential of commercially-driven football teams to embed themselves in local football scenes.

Followers of the English Premier League may be familiar with the sports betting platform SportPesa, which has links with Arsenal, Southampton and Hull. The brand was launched in Kenya and ‘pesa’ is the Kiswahili word for money. In 2016 SportPesa became the commercial partner of the Kenya Football Federation – they have the naming rights to the Kenyan Premier League and are the main sponsor of the two most popular football clubs in the country, Gor Mahia FC and AFC Leopards SC.

This commercial partnership has impacted the structure of football, whereby previously each club operated as a SACCO (Saving and Credit Cooperative Organisation) and was funded directly by the supporters. Evidently, this commercial sponsorship is also intrinsically linked to the controversy surrounding the rise in gambling in Africa, another example of capitalist social phenomenon embedding itself on the continent.

In Uganda it was recently announced that StarTimes – the Chinese media company and digital TV operator with close links to the Chinese government – would be taking over both the naming and broadcast rights of the Uganda Premier League, in a ten-year deal reportedly worth $7 million. This is generally understood as the biggest sponsorship deal in Ugandan football to date and demonstrates a further instance where the commercialisation of football in East Africa is linked to wider developments in the political-economy of the region, namely Chinese investment.

These examples illustrate the commercialisation of football in East Africa, and the significant impact this is having on local football scenes. As Jörg Wiegratz has argued in this series, there is a substantial lack of empirical analysis directly concerned with capitalist social phenomena in Africa. Therefore, empirical research is required into how commercial models of football get embedded into local environments, and the changes this brings at economic, socio-cultural, and political-economic levels. The increasing commercialisation of football in East Africa provides an opportunity to explore the emergence of these processes in practice.

Wiegratz and I have recently teamed up to develop research questions on the dynamics of the commercialisation of football in Eastern Africa. They include: to what extent has commercialisation affected the development of football in each country: i.e. led to increasing levels of professionalism, improved the quality of performance and overall spectator experience? How has this affected the popularity of domestic football in comparison to the massive interest in European football? Is there any evidence that football development at the domestic level leads to an improvement at the continental and international level?

How do these new models and economic visions breed new desires and practices of accumulation in terms of match attendance/television viewing numbers, consumption of official merchandise and related products etc? How do these new configurations create new social categories and tensions between the individual and collective, for example by disturbing the status-quo and disrupting engrained supporter allegiances?

There is a shortage of academic literature on football, despite the heterogeneous economic, political and cultural significance of the global game. Studies in popular culture have often stressed the unique potential of popular culture to reflect contemporary reality, and football represents one area which can be understood as having this potential. Ultimately the mass popularity of football provides important insights on what people themselves consider important in their lives, and therefore necessitates deep analysis.

This, combined with the analytical lacuna on capitalism in Africa, provides fertile grounds for innovative research. Empirical analysis of these processes will allow us to identify what the implanting of the commercialisation of football in East Africa can tell us about the broader phenomenon of capitalism in Africa generally.

Adam Rodgers Johns is a freelance writer and postgraduate student in African Studies at the School of Oriental and African Studies, University of London. He blogs here.