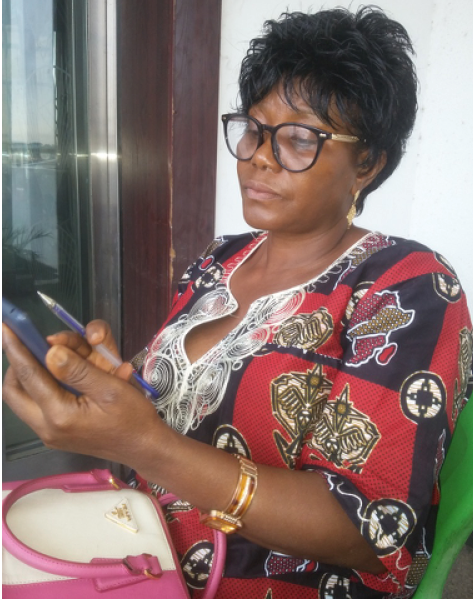 In an interview with roape.net Helen Batubo, an activist and worker in Nigeria, describes her experiences at the ROAPE workshop in Dar es Salaam in 2018. She argues that there are possibilities of influencing many other activists through these activities.  Such events are crucial, she says, in ‘calling us to revolt.’

Can you please introduce yourself for readers of roape.net?

I was born in 1962, in Okrika, an island in the Niger Delta. I was the only daughter and became somewhat of a Tom boy to survive with my many brothers.  My dad was my mum’s second husband, but we generally depended on my mum for our upbringing due to his drinking.  My primary schooling was delayed by the Nigerian civil war and I later also saw the violence of the Niger Delta militants/gangs first hand. I have suffered my share of sexism and was nearly raped six times (I learnt to fight back after the first time). I ran away from home to join my uncle in Potiskum in the far north east of Nigeria, before gaining a place at Katsina Teacher Training College. Unfortunately, I had to leave before the course finished due to lack of money.  I then settled in Kaduna with the father of my daughter and worked to enable him to gain a degree at the University of Benin. After we split up, I had many different jobs to survive and bring up my daughter who is now studying for her masters degree. I have been a sales representative, a printer, a welder, an IT teacher, a nurse and restaurant manager. I have suffered from some poor bosses, but never had the opportunity to benefit from membership of a trade union. I had to leave my most satisfying post, as a teacher in Kaduna, due to the community violence and then settled in Abuja, the capital of Nigeria. I have always had a strong feeling that we need a fairer world, from my own experience and the influence of the Afrobeat singer, Fela Kuti and the struggles against apartheid in South Africa. I was recently introduced to organised socialist politics and have been able to travel outside Nigeria for the first time, to the ROAPE meetings in Accra and Dar es Salaam.

Can you speak about the experience of the workshops you attended?

The workshop in Dar es Salaam gave me so much encouragement.  It gave all of us insight and let us know what is happening in the different countries represented. Each person wanted to use their country as an example.  So, I learnt the perspectives of the Tanzanians.  In turn, the Tanzanians learnt from my ideas and we each learnt from the Kenyans. The workshop allowed us to share our experiences, so by the time we left we realised the different countries had similar problems. We learnt that our African leaders and the world leaders are collaborating to suppress their subjects.

Our countries do not work because of recycling people that are not fit, the masses giving their votes and supporting leaders based on sentiment. The rich people have a way of buying your voters card. Even when you know that the person you are clamouring for to be there, frequently they never get elected or work anyway in their own interests.  own personal reasons and gain.  Perhaps because the person is going to give you some small change, or if the person is of the same faith as you or of the same tribe as you or you are business associates. So, this is what I mean by choosing our leaders based on sentiment.

The workshop encouraged us to have a mind-set for revolt, to stand up and say no, where possible. The poor and the down trodden should stop blaming the rich because they only encourage them to be there. In the same way, African rulers should stop blaming their former colonial masters, they should stop pointing accusing fingers at the Europeans. They were colonised, quite correct. They were underdeveloped by them, correct.  But for how long will they let themselves to be underdeveloped? Don’t they also have a mind to reason for themselves?

Given this situation, what would you argue is the solution?

The masses have to learn collectively to be reasonable and stop being sentimental. The problem is that the masses know the right people to elect to be their leaders, but rather they use sentiment to put the wrong people there. The masses need to look inwards and choose to do things correctly, not selling their votes, saying my brother, my sister should be there.  They should elect leaders who have a heart and love the masses, there are people like that who we know.  For example, there are people that are even less corrupt in mind than President Buhari of Nigeria, we know them.

Returning to the workshop, the best things were the general deliberations, analysis about how Africa is being impoverished by its leaders.  I agree with the topic that indeed, our leaders do not have a heart for the common people, they do not love us! All they think about are their personal wealth, looting for their unborn generations. So, they go to any lengths to force their way into power and remain there.  They use dictatorship, they use the military to protect themselves and to commit illicit atrocities.

The general aim of the workshop was to arouse in us radical stories, the radical mind to be able to say “no, enough is enough!”  Enough of giving our vote or our mandate to leaders who do not have a focus, but just want to be there for power and wealth.

The possibilities of what we can do to influence others through these meetings that we are holding is crucial.  So, the workshop influenced me by calling us to revolt. It must not always be the old people and the money bags that should rule us.

The workshop also helped me to understand the world better, about global warming, climate change and other things. The Europeans are not forcing our leaders to implement policies but they are working in more subtle ways. After all you can force a horse to the river, but you can’t force it to drink the water. If the Europeans are giving us unfavourable policies and our leaders choose to succumb it is not the fault of the Europeans?  If our former colonial masters suggest their ideas, it is not mandatory for our rulers to succumb, if it is an unfavourable policy for our people.

Can you speak specifically about the sessions at the workshop, what stood out for you?

The long standing, manipulative and uncontrollable practices of the rich to continuously loot and amass the wealth of Africa was the overwhelming sense I got. Most of the resultant issues have been highlighted during our deliberations not only at the Tanzanian ROAPE workshop, but in our every day discussions as socialists.

Take for example, the session on ‘Imperialism in Africa today: The place of class struggles and progressive politics’, using my country Nigeria as point of reference. we discussed how most of the oppressed poor people assist the looting by protecting and defending the ill-gotten wealth of the few capitalists. The outrageously annoying thing is that many poor people, for a pittance, are so quick in singing the praises, flattering and encouraging the unrepentant looters. This, in turn, boosts the egos of the elite and encourages them to loot even more.

I want to submit, with an apology to persons of a like mindset of Marxism, that most Nigerians are blind followers who do not want to take a firm stand with credible truth. This may be for personal selfish reasons or for other religious or ethnic sentiments. They prefer to keep supporting and recycling square pegs in round holes, in the corridors of power, who continue to loot the wealth that should belong to the people.

If we are not ready to look inwards to identify and retrace our steps to principally correct practices, our undeserving leadership will continue to destroy our lives. Therefore, using this platform, roape.net, I want to say NO to all forms of further wealth looting. We should resolve to only give mandates to selfless, visionary statesmen and women who have the good of the poor uppermost in their hearts. We need such people to get into the saddle of leadership and headship of their states across Africa.

It is quite true that the ruling classes all over, especially in Africa, tend to use unwarranted force to cage citizens against the freedom of questioning their illicit spending. The bad news is that the idea paves the way for the rich to conspicuously loot without blinking or looking back. As a result, we have a society that does not have strong policies to checkmate its leaders and ensure accountability. How and when shall impoverishment be eradicated? The future therefore remains precarious, unless our collective consciousness acknowledges and confronts these ordeals.

So, in summary, what is the alternative? Are you hopeful about the future of the struggle for such an alternative?

Well, that’s difficult to say, if sentiment is still preferred above credibility, then we keep having these useless ‘talk-shows’, pantomimes. Of course, the global bourgeoisie have only succeeded thus far because the domestic rats delight in opening the doors to other rats. As ever, foreign bosses are only able to exploit the poor masses of Africa with the active co-operation of the local elite who have benefited from this relationship beyond their wildest dreams.

I think the workshops could be further improved by having more people there, but I know that this is difficult due to financial constraints.  So, more people are not able to share their own ideas. As ever, it all boils down to money! By right, the power is in our hands. If we are doing things correctly, when they are enacting laws, they should include checks and balances. There should be laws that have to do with accountability. There are countries like China or Saudi Arabia, for example, where if you guilty of corruption then you face life in prison or even death.  So, no-one talks openly about looting, they deal with their corrupt ministers and other leaders. But here in Africa, we just praise rich people in the hope of getting some small, minor change. It all depends on what we think we can achieve, and then how we fight for it – these were my lessons from the ROAPE workshops.

Helen Batubo is an activist and worker based in Abuja, Nigeria.