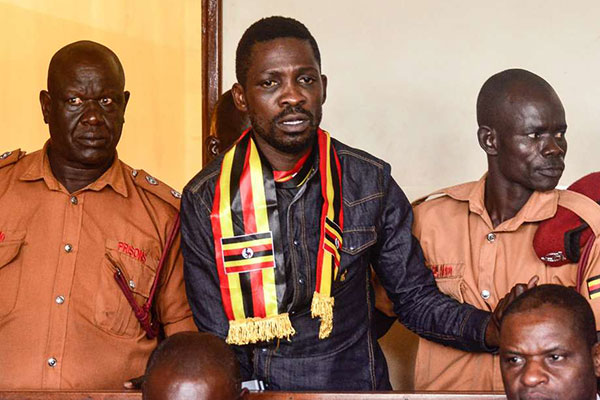 Ugandan pop star singer and politician, Robert Kyagulanyi aka Bobi Wine, has generated an unprecedented political buzz around the world. Exploring the background to the country’s crisis, Moses Khisa writes how Uganda is a country with endemic socioeconomic problems and exists in a distorted and parasitic capitalist economy. Khisa writes how the government is presided over by the visibly tired president, Yoweri Museveni, who claims weird and even messianic powers.

From interviews with major international television networks, newspaper reports and Op-Eds in leading newspapers to official reactions from the European Union parliament and United States members of congress, Kyagulanyi overnight cast a shaper and arguably more vivid spotlight on Uganda than has previously been done by either the traditional political opposition or civil society activists. Needless to say, he is a political neophyte having only joined national politics last year. Such is the story of a country whose young population is in desperate need of political change, grappling with biting socioeconomic distress that has engulfed what was primed as a neoliberal economic African success story.

The Ugandan government has reacted with both panic and paranoia to the unprecedented rise and the challenge posed by Kyagulanyi. It initially attempted to stop him from leaving the country for further treatment in the United States following his alleged torture at the hands of the Special Forces Command (SFC) soldiers. With hindsight though, it appears that the government sensed something ominous: an anti-regime tidal wave was likely to fly along with Kyagulanyi to Washington and to the wider global community. And it did. His trip to the United States allowed him unfettered access to an international audience.

The attention and coverage he received over a couple of weeks instantly placed him at the top of the struggle against the Museveni regime. This raised the possibility of rallying a wider sentiment against the regime especially in the most important western capital – Washington. Notwithstanding his public utterances, often castigating or downplaying the west’s role, Washington has been Museveni’s patron and the president deeply cares about his relationship especially with the Department of Defence as a key source of military aid.

Regimes supporters especially on social media have drummed up the narrative that Kyagulanyi is a ‘fake’ foreign front, sponsored by actors bent on capturing Uganda for their own interests. There has been an uncanny suggestion that external interests have their eye on Uganda’s oil and want regime change to institute a puppet government. More generally, government officials have alluded to a supposed external hand in the growing political protest in Uganda. ‘There has been a marked pattern of pre-planned and well-executed violence, quite often with active financial and technical support from foreign groups operating in Uganda under the very guise of freedom of expression,’ Government spokesman, Ofwono Opondo, told the media on Monday 17 September in Kampala.

The suggestion that opposition to the Museveni regime and the rise of youth insurgency, now coalescing around a youthful Kyagulanyi, is the handiwork of external forces is at best a laughable, hollow charge. If anything, arguably more than many of his contemporaries, Museveni and his government have hugely depended on external patrons and foreign forces for more than three decades to hold onto state power. From fighting America’s wars in Somalia against Al-Qaeda and its regional affiliate and being the proxy against a Sudanese Islamist threat in exchange for military aid.

Economically, as the Washington Consensus’s leading African student, Museveni and his government have been the foremost agents of global capitalism with all its hideous vagaries. The hard economic conditions now propelling young people to follow populist young politicians like Kyagulanyi have in large part been powered by how neoliberal economic policies were pursued in Uganda at the behest of external actors. Uganda’s economy is a good example of African economies that do no more than service global capitalist interests – it is the place for hot speculative capital to make a quick buck today and get out tomorrow in a ‘free for all’ environment. Museveni and his government do not, therefore, have the moral authority to call out external influence in Ugandan politics.

At any rate, there is enough combustible material inside Uganda to fuel furry and propel protest. With massive youth unemployment, economic distress and a dire sense of hopelessness, Ugandan society is a powder keg. Hundreds of thousands of young people graduating from schools, colleges and university find nothing in the job market – the jobs are not there because the structure of the economy is not attuned to generating jobs. Politically, the average Ugandan, even one who ordinarily supports the Museveni regime or supported it the past, has become deeply disillusioned by one-man rule which has been extended once more.

Last year, reports, including from a national poll, showed that the majority of Ugandans were opposed to removing the age limit cap on the presidency and were in support of reinstating presidential term limits. Term limits were dubiously deleted from the constitution in 2005, and in blatant and total disregard of popular opposition, in December 2017, the parliament passed constitutional amendments that among other things removed the last remaining roadblock to Museveni’s project of a life-presidency. Museveni is now eligible to contest again in 2021 without age and term restrictions.

Since 2005 the popularity of the ruling National Resistance Movement (NRM) has hinged heavily on blatant use of state patronage and outright bribery – in effect, paying to rent support. The ruling party boosts of an overwhelming majority in the national legislature and control over most district councils. The president routinely reminds whoever questions his longevity in power by referring to the fact that he is being periodically and democratically elected leader. Museveni is on record in 1986 at his inaugural swearing in to have chastised African rulers who did not want to leave power.

But unlike other dominant ruling parties both in Africa and elsewhere, historically and at present, the NRM has no robust organisational presence beyond living off the state largesse. Its claim to supreme power is highly superficial and, outside of the control of state finances and state violence, untenable. The NRM lacks independent financial resources, has no extensive bureaucratic structure, no known long-term strategy of renewing its existence and institutional reproduction especially in terms of leadership.

What is more, while Museveni appeals to his being elected, the credibility of Uganda’s elections, especially presidential ones, have collapsed since 2006. Arguably, the last time he won an election fairly was in 1996, and if one really stretched it, legitimacy ended with the 2001 elections. The independence of the Electoral Commission is not guaranteed under the existing legal regime where the president, who is the most important candidate in every election cycle, decides who should head the commission and the other members appointed to oversee its work.

It is not surprising that such a commission has to do what the appointing authority wants when push comes to shove. Add to that the fact that the security forces are not neutral actors in the electoral processes, in fact the entire state apparatus comes to bear on the elections on behalf of the incumbent. This has always been the crux of the lack of credibility in African elections and the primary reason term limits were embraced in the new and rewritten constitutions during the period of democratisation on the continent in the 1990s.  It is almost impossible to compete against the incumbent except in countries like Ghana where electoral and state institutions have evolved to the point of relative autonomy.

At any rate, Museveni is ridding the tiger. He presides over a broken political system where the basic rules of the game are stridently contested by his opponents. The political tailspin appears to worsen with newer challengers, the latest being the political movement now dubbed ‘people power’ with Kyagulanyi as the symbolic head.

The government as a whole has increasingly become inept and the state’s institutional apparatus has decayed while the political elites are engaged in crony accumulation, and the state is unable to serve the wider public good. The healthcare system in Uganda has been under permanent sickness. While basic health indicators like infant mortality and life-expectancy have modestly improved, the overall public health services are decrepit. The same can be said of education where high enrollment figures at primary and secondary levels are countered by equally high drop rates and a rather mediocre education.

The crux of the problem is that the system has been anchored on political corruption which sustains the governmental system but undermines the public good – individuals who profit off the system, both in government and in the private sector, are incentivised to work hard to protect it. They buy-off regime critics and demobilise the political opposition, all at the expense of committing resources to critical public goods and services.

As matters stand today, it is near impossible for Museveni to run an efficient government that is based on merit and which can overcome the entrenched nepotism, crony capitalism and corruption precisely because the latter are the foundation upon which the regime sits. To be sure, the march of history is often difficult to predict, let alone stop. With rapidly changing demographics in an era of social media, the wheels of political change can shift uncontrollably and unconventionally. Today we are talking about a country with endemic socioeconomic problems in a distorted and parasitic market capitalist economy presided over by a visibly tired ruler who claims weird but not entirely unusual messianic powers.

Moses Khisa teaches politics and political development with a focus on contemporary Africa at North Carolina University in the United States. He was born and educated in Uganda and remains a prolific commentator of the country’s political scene, writing regularly for The Observer.