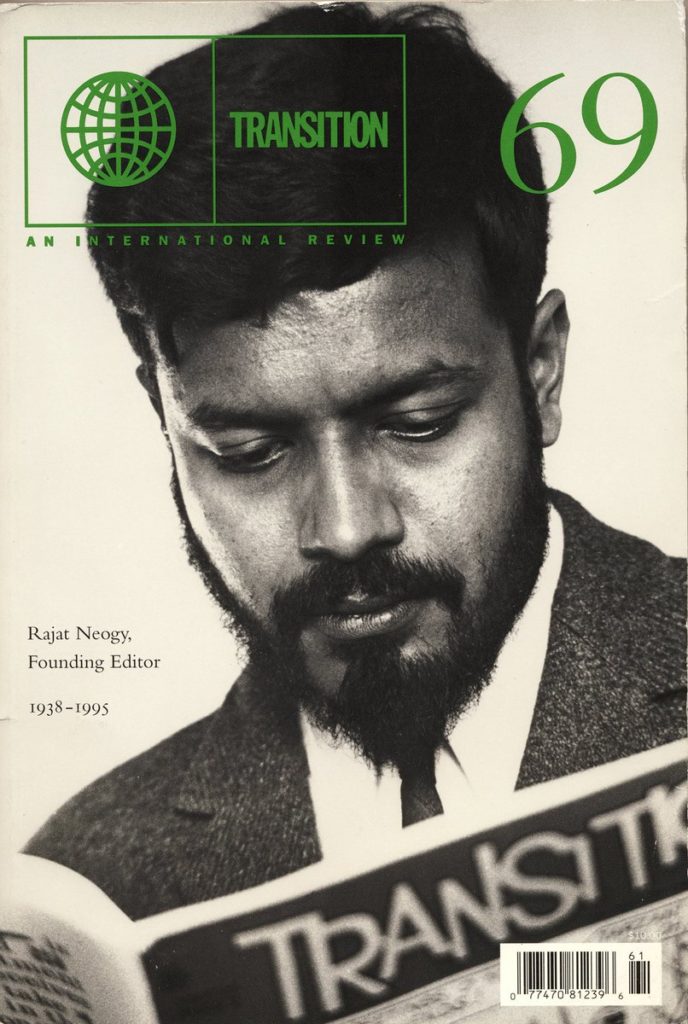 In a recent issue of the London Review of Books, Mahmood Mamdani wrote what I believe to be a highly controversial essay on ‘The African University’, in which he compared and contrasted the universities of Makerere in Kampala, Uganda and the University of Dar es Salaam in Dar es Salaam, Tanzania, claiming that they represented two different paradigms for African universities, epitomised by Ali Mazrui and Walter Rodney, that he refers to as exemplifying ‘the mode of reasoning’ and the ‘ideological orientation’ respectively.

I do not intend to provide a critique of his piece here. Rather, I want to draw the attention of readers of roape.net to the magazine or journal called Transition, to which Mamdani refers in the course of his piece. I recently wrote on this website about the Journal of African Marxists, which had it hey-day in the 1980s.

Transition was founded in Kampala in the early 1960s, on the eve of independence by a young writer, Rajat Neogy, a Ugandan of Bengali origin. Neogy declared that ‘… the ultimate purpose of a literary magazine will always be to herald change, to forecast what new turn its culture and the society it represents is about to take. It will do this by sometimes allowing prejudice and temporary obsessions to be aired [and] by being permissive to radical innovations.’ From the very start, Transition commissioned and published work by political activists and major political figures as well as by intellectuals and writers.

In the second issue, for example, Julius Nyerere published a defence of the one-party system that would soon exasperate many of the magazine’s contributors and readers. The following year, Nyerere became president of Tanganyika, and went on to outlaw all but his own political party. Tom Mboya, the Kenyan trade unionist, published a piece on the press and governments in Africa, shortly before Jomo Kenyatta appointed him Minister of Justice. Another piece by Mboya, on ‘African socialism’, appeared a few issues later. Kenneth Kaunda, published on the future of democracy in Africa at roughly the time he became the first president of Zambia.

By the mid-1960s, Transition enjoyed considerable attention, and indeed prestige, both for the eminence of its contributors and for the quality of the contributions. Transition was never afraid to offend and frequently invited controversy with articles about literary and racial politics, sex, stereotypes, and the regimes in power, while at the same time always making space in its own pages for robust retaliation. As Mamdani remarks, ‘by the mid-1960s, Transition was the locus of an ever-widening regional conversation, from Achebe on “English and the African Writer”, through Terence Ranger on Roger Casement, to Paul Theroux on Tarzan, a send-up of expatriate attitudes and an early example of cultural studies in Africa.’ James Baldwin also contributed, as did Ali Mazrui.

Shortly after Kwame Nkrumah was deposed in Ghana in 1966, Mazrui published a critical piece on ‘Nkrumah: The Leninist Czar’, which he followed up with a piece entitled ‘Tanzaphilia’ – a withering critique of the regional and international left’s infatuation with one-party rule in Tanzania (as Tanganyika became in 1964). Both essays were ‘incendiary’, and, according to Mamdani, sharpened the differences between Mazrui and the left at the University of Dar es Salaam.

However, if he identifies Mazrui as ‘the most important liberal critic of the new African nationalism in power’, Mamdani also recognizes Issa Shivji as ‘its most important critic from the left’, and specifically mentions Shivji’s two books, The Silent Class Struggle (1970) and Class Struggles in Tanzania (1976) that identified Tanzania’s ‘African socialism’ as a disguised form of capital accumulation by a new state-based class.

In 1968, the Ugandan government jailed Neogy for sedition, despite international outcry; the magazine had criticized President Milton Obote’s proposed constitutional reforms. After Neogy’s release, Transition was revived in Ghana in 1971 and the Nigerian novelist Wole Soyinka took over in 1973. During Soyinka’s tenure, Transition became still more contentious: the cover of one issue sported a cartoon image of Ugandan dictator Idi Amin, with ‘Karasi!’ (Finish Him!) splayed across his face. Transition was unlike anything else, in Africa or abroad, and when it folded in 1976 for financial reasons it left a void.

In 1991, Henry Louis Gates, Jr., a student of Soyinka’s at Cambridge University and a frequent contributor to the Ghanaian Transition, brought the magazine back to life. In the subsequent decade, Transition would refashion itself as an international magazine about race and culture, with an emphasis on the African diaspora. Today, Transition is sub-titled ‘the magazine of Africa and the diaspora’, is hosted by the Hutchins Center for African and African-American Research at Harvard University and is published three times annually by Indiana University Press. It is also on Twitter at @Transition_Mag.

Its home page states that: ‘since its founding in Uganda in 1961, the magazine has kept apace of the rapid transformation of the African Diaspora and has remained a leading forum of intellectual debate. Now, in an age that demands ceaseless improvisation, we aim to be both an anchor of deep reflection on black life and a map charting new routes through the globalized world.’ Its editorial ‘mission statement’ notes that ‘accelerating revolutions in telecommunication, digital conversion, economic speculation, and social dislocation are rapidly transforming the conditions and activities of Africans and African-Americans. The new forms and tempo of change compel deep reflection and novel approaches to the representation of black life’.

Accordingly, ‘to the magazine’s traditional focus on the condition of Africa, race, and cultural identification, we add an emphasis on creativity and innovation in social, economic, cultural, and political life. In full recognition of the porous membranes of black belonging, we will pay special attention to the ever-fluctuating social geography of the black world, surveying developments throughout the Americas, Europe, and Africa, while glancing at times across the Pacific and Indian Oceans.  We will attempt, in other words, to make Transition a pivotal medium for discussion of the global predicament of the African Diaspora in an age that demands ceaseless improvisation.’

It states that it will ‘continue to feature fiction, creative non-fiction, narrative journalism, art and cultural criticism, political commentary, interviews with important figures and thinkers, book and film reviews, and poetry. As always, Transition aims to engage a broad swath of the educated public with clarity, insight, and dynamism …In our American incarnation, the magazine has won a wide array of awards for design, international reporting, and general excellence; our essays and interviews have been reprinted around the globe.’

The first important lesson to be taken from the history of Transition, to my mind, is that it started life as an African initiative, rooted in the immediate concerns – political, economic, cultural – of the African intelligentsia and of African political activists (even if it included contributions by non-Africans), what marked its early days was  its vigour and drive, and above all its relevance in the 1960s and 1970s, which from this essential fact. Once transplanted elsewhere, and driven by very different concerns (despite the mission statement of its reincarnation), it inevitably lost that sense of rootedness.

That is not to accept that it was merely a child of the times, of the process of ‘de-colonisation’ and that a similar initiative could not flourish in modern times, in the era of ‘globalization’ (the distinction made by the editors of the new Transition). I believe that an African journal, whether in print or on-line (or both), rooted in African concerns and with an editorial board at least in large part based in Africa could be successful today, if able to resolve both the question of funding that led to the demise of the original Transition and also the problem of communication and logistics.

As regards the latter, in principle it should be easier today than it was in the 1960s and 1970s when there was no email or internet and no Skype, Whatsapp or FaceTime, and when the real cost of international travel and international postage is lower than it was then. As regards the former, more difficult issue, the Journal of African Marxists  resolved that issue partly by having a sympathetic publisher in the UK.

The Review of African Political Economy – which also started out as an independent financial concern – now has a commercial publisher in the UK; and many other journals concerned with African Studies have commercial publishers in the UK, the USA or elsewhere. The strength of this (which is why ROAPE changed its business model) is that a commercial publisher generally ensures a more reliable financial base for such a journal. The main  problem with this model, however, is that what makes for successful journalism and intellectual debate in the minds of the editors, the contributors and the readers may not always prove commercially viable, and vice versa.

Another important lesson, in my view, is that the original Transition was able to be wide-ranging in its coverage (even if limited by its English language medium) and draw in contributions from many different sections of the intelligentsia (i.e. not just academics) and from different cultural traditions, even if it was mainly based on contributions from English-speaking countries. This gave it a multi-disciplinary and to some extent a multi-cultural flavour. The risk here is that the ‘focus’ may get lost in favour of ‘scope’, and ‘edge’ or controversy in favour of ‘surface’ and acceptability.

The final lesson one might learn from the experience of Transition is that the journal was successful as a medium for debate and controversy, precisely because it was run by and written by ‘amateurs’ – people who loved and were passionate about what they thought, what they said and what they read, and linked this passion not only to a concern to understand the world but also to change it. Today, there is a tendency for journals to be edited, written for and read by ‘professionals’, often academics, whose may also be passionately involved but who, after all are ‘in it’ for their own careers and professional advancement perhaps as much as they are to change the world, if they are interested in that project at all.

Featured Photograph: Founding editor of Tansition, Rajat Neogy, on the cover of the magazine after his death in December 1995.