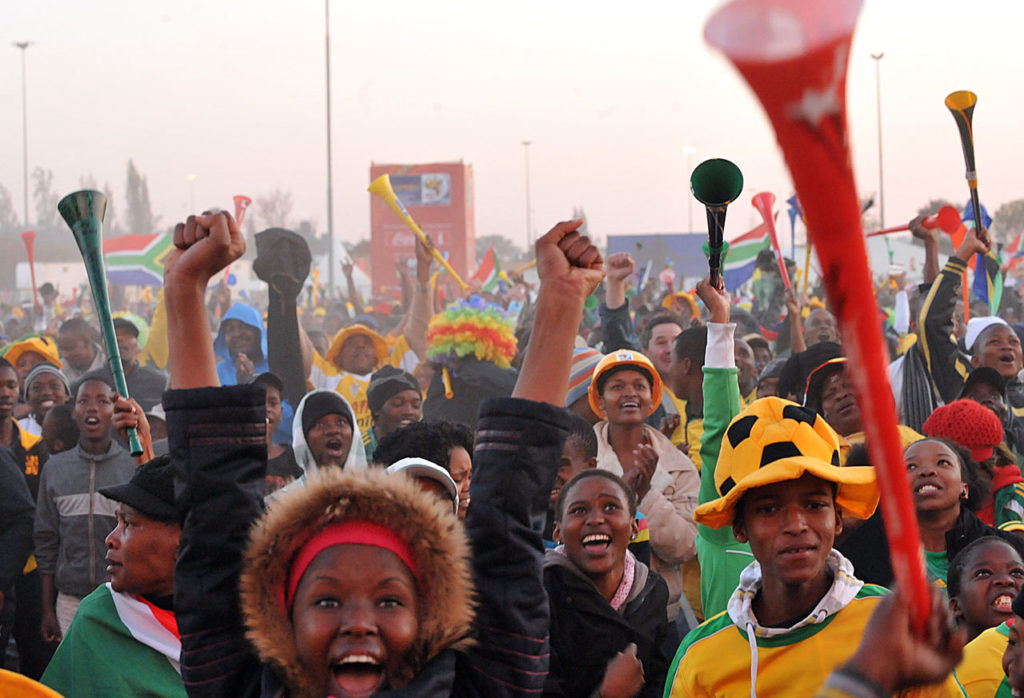 I watched the 2018 Football World Cup in four places. The first time was on a veranda of a pub with two friends in Halle, a small town in Germany that most people have not heard of or have heard of for all the wrong reasons. My friends were wary that they might be mistaken for Mexicans and this was something they desperately wanted to dispel (especially in a town renowned to be anti-foreigner) and more so as Germany suffered a 1-0 defeat in the end. The second time I watched Germany play was in Hamburg in a friend’s flat. It was a nail biting experience as Germany salvaged the game and beat Sweden in the very last minute. Nothing, however, prepared me for Germany’s defeat by South Korea. I was watching the match at work in a room that had been conveniently converted into a public viewing area in a work-place proudly known for the diversity of its workers.

Football in all its glory, brings out the sportsmanship or cheerleader in many of us. It’s the one time many people from different parts of the world convene and celebrate an imagined global community. Or like many of my friends whose countries did not participate in the World Cup, we adopt national teams based on a perceived belonging. Thus, for me it seemed only right that I would support Germany and perhaps any African country being that I am living in Germany and hail from Uganda. However, unlike other football fans, my interest in football and the World Cup has little to do with the sport itself. It has more to do with what takes place behind the scenes, away from the limelight and cameras. The rarely spoken about but much disdained aspects that come with organizing FIFA World Cups. I have researched the governance arrangements that enable FIFA to successfully run the World Cup. My research focused on the contractual arrangements that enabled FIFA to orchestrate security in the mega event zones of the 2010 World Cup in South Africa.

The World Cup in Russia was the first World Cup to be staged under a new president and I do not mean Putin but FIFA president Gianni Infantino. The last two World Cups in South Africa and Brazil were held under the now suspended president, Sepp Blatter. Under his leadership, the football governing body had been plagued with allegations of corruption. In particular it was alleged that the process for awarding World Cup tournaments and sponsorship deals was fraught with bribery which he and a few of his cronies had been benefiting from.

Unless there is a complete overhaul of the process of awarding sponsorship deals or choosing the World Cup host, it is naïve to think that allegations of corruption will cease to exist under the new president. However, fear of corruption is only one of the issues that people should be concerned about. Often unreported is another issue of equal importance: the role of transnational non-state actors, their increasing power and the protection of private profits. The contractual agreements for mega events are not open to much negotiation and are mostly signed on a ‘take-it-or-leave-it-basis.’ Due to the stiff competition between countries that seek to host these events, any country that seeks to negotiate the terms before being awarded the rights risks losing out on being picked. As a result, emerging economies such as South Africa, promise to deliver the same way developed countries in the West do despite being at different stages of development. Emerging economies often bid for these events with the promise that these events will accelerate development plans. This was the case in South Africa’s motivation and justification for bidding for the 2010 FIFA world cup.

What is noteworthy about the governance arrangements of FIFA World Cups is the increasing power of private corporations. This was most notable when South Africa hosted the World Cup in 2010. It was the first World Cup in Africa and so understandably there was pressure to put on a good show. Remarkably, as is the case with all countries that seek to host this event, there was little room for negotiating the agreements that needed to be in place for the success of the competition. Indeed, it was during the implementation stage of these agreements that South Africa saw how arduous some of the terms were which in turn led to people who had been engaged in informal businesses around spaces designated as FIFA zones, to lose the means to make a living during the months leading up to the event. This is because mega event zones are governed by special laws. For the 2010 World Cup, these were consolidated into two Special Measures Acts that were to bring into effect the terms agreed to between FIFA and South Africa.

FIFA insists on the protection of the commercial rights of the sponsors of the World Cup. Interestingly, in marketing mega events to the public, countries often cite that they will bring a lot of investment and tourists to the countries. In South Africa’s case, the event was marketed as an African World Cup and that hosting the event would allow groups formerly marginalized during apartheid to benefit from the event. However, in reality fulfilling the terms of the Host Country Agreement and Host City Agreements meant that many of the imagined benefits would indeed remain imaginary at best. As South Africa claimed – amidst criticism that they were spending public funds on expensive stadiums – the FIFA World Cup was meant to fast track infrastructure and other developmental goals that had already been planned. Disappointingly, as the host city of Cape Town found out for example, they would have to build a brand new Stadium at their own cost and in a swanky neighbourhood called Green Point and not in the poor area of Athlone, thus limiting the benefits for poorer sections and contrary to what had been promised.

So, the organization of football World Cup tournaments is a game in itself. It’s a game in which FIFA has the upper hand because the terms of the agreement are always in its favour. It’s a game in which FIFA always wins because they call the shots. What is largely unknown to the public, is the lack of transparency in some of the contracts. For instance, the clauses within the Host Country Agreement are mostly broad and FIFA states that incase of any ambiguity, FIFA’s word is final. This would not be so problematic if all terms of the agreement are known before hand by the Host Country or Host City. Instead, FIFA cleverly inserts that by signing the Host Country Agreement, the Host Country is deemed to have agreed to any future clauses that it may introduce. Moreover, it is hard to hold FIFA accountable in any meaningful way as the Host Country Agreement stipulates that the Host Country agrees to indemnify FIFA for any costs that may arise out of a lawsuit against it, in relation to staging the World Cup. This means that whilst anyone is welcome to sue FIFA, any costs will be borne by the host country. Thus in essence, FIFA exists in a legal vacuum. It is non-profit organization that is successfully run like a profit organization but can hardly be pinned down legally because of the web of protection it has woven.

As a consequence, what is at stake is not who wins the World Cup but the protection of the sponsors. The FIFA World Cup and Olympic Games maybe about bringing people together and promoting a global community, but it is also about the expansion of power and profit of global corporate brands such as Adidas, Nike, Coca-Cola, Anheuser-Busch (the makers of Budweiser) and the like. The security of mega sporting events is just as much about the protection of these events from terrorist attacks and hooliganism as it is about the protection of the intellectual property rights of the sponsors of these tournaments. The policing of the latter is in evidence when you attempt to enter public viewing areas, or any space designated as a FIFA zone with a branded item that is a competitor to any of the sponsors of the World Cup.

I have read the bidding documents and Host Country Agreement for Russia 2018. These documents which are meant to be public but were not easily accessible and I only got a hold of them much later. So, I have a slight idea what lengths Russia went through to win the bid to host the World Cup. The secrecy surrounding these documents can be credited to FIFA’s request for non-disclosure in the Host Country Agreement – a document that many would categorise as being in the interest of the public. By now it might be clear to discerning readers that these events are about much more than sport. For countries in the BRICS – Brazil, Russia, India, China and South Africa – the increasing interest in hosting mega sporting events is about self-promotion, profit and an attempt to attract investors and cement their status (politically and economically) on a global stage. Thus the exorbitant costs that goes into organizing these events, should not be measured in financial terms alone.

What will be the legacy of the Russia 2018 FIFA World Cup? Did Russia learn any lessons from South Africa or Brazil? Comparatively, Russia had a longer run in the tournament than South Africa did in 2010. However, like South Africa, the staging of the tournament will not only be remembered for the team’s performance. Will we still remember Russia in 2018 for the political fall-out with England over Novichok? Or will it be the feel-good atmosphere football fans around the world have experienced in the country? I suspect we will tell stories about white elephants and exorbitant costs used to erect masculine playgrounds for a global elite. However, are these the questions we should be asking or stories we should be telling? After a conversation with a friend, I was inspired to think differently. In our discussion about the purported patriotism that mega events promote, a friend expressed her discomfort in celebrating nationalism amidst a growing tide of anti-immigration sentiments. I think she is correct.

I hope that now the last whistle has been blown, we begin to ask questions that provoke new insights into what it really means to belong to a global community. My hope is that the questions that we ask will not hinge on age-old issues such as how much money was made or lost in staging the 2018 World Cup. Instead I hope we will interrogate the morality of spending such amounts to promote a supposed global community through sport extravaganzas whilst simultaneously building walls and reinstating borders around the world.

Featured Photograph: Fans of Bafana Bafana, as the South African soccer team is known, watching the opening game of the World Cup on an open-air screen in Soweto (11 June, 2010).