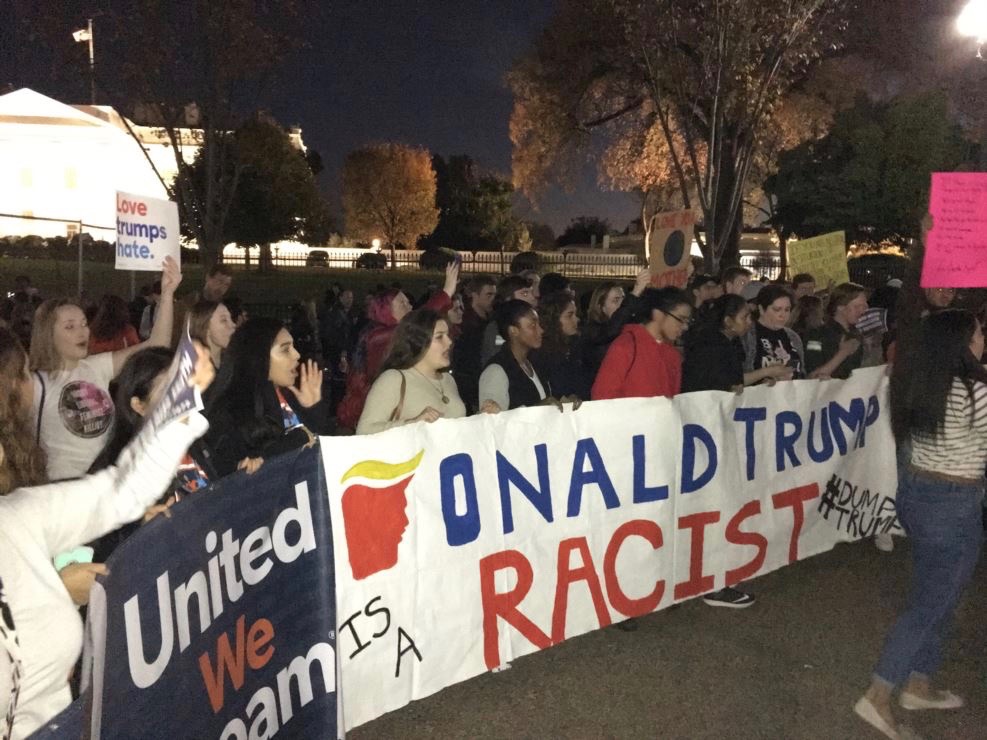 From the editorial to Issue no. 155 of ROAPE, Reginald Cline-Cole discusses how roape.net and the print journal are becoming increasingly important to the task of promoting radical political economy analyses and debates – of filling intellectual, academic and revolutionary voids. The issue contains four research articles and, exceptionally, an extended Debates Special Issue on the Egyptian revolution. Readers can access these debates for free from our website by registering and logging in here.

In January this year Donald Trump reportedly described various South American, Caribbean and (apparently all) African countries as ‘shitholes’ (or, according to some, ‘shithouses’) during a meeting on immigration with senators in the White House – eliciting widespread, often ‘forceful’, protest. Raj Shah, a White House spokesman, likens Trump’s stand on immigration to ‘fight[ing] for the American people [rather than] fight[ing] for foreign countries’ and explains the main thrust of his immigration policy thus: ‘Like other nations that have merit-based immigration, President Trump is fighting for permanent solutions that make our country stronger by welcoming those who can contribute to our society, grow our economy and assimilate into our great nation.’ Whether or not this represents racism, xenophobia, prejudice and bigotry is largely academic. But a list of Africa related questions directed at the State Department by Trump transition staff in January 2017 point to a questioning about the use of foreign aid, and even about American security interests, on the African continent. While after a whole year in office, the administration had still not outlined a clear Africa policy nor filled vacant senior diplomatic postings in both the US State Department and embassies on the continent.

For us at the Review of African Political Economy, the significance of this comment lies in its affirmation of the need for ROAPE to continue to provide ‘radical analyses of trends, issues and social processes’ in Africa, both in the pages of the journal and, increasingly, across diverse spaces of mobilisation and sites of resistance, including social media (see our posts on roape.net).

Twitter is Trump’s favoured means of communication, the one he resorted to with his denials and obfuscation when news of his alleged remarks broke. The comment was widely ridiculed, debated and contested in the blogosphere and online news sites, forcing Trump to send placatory letters to African leaders restating US commitment to their continent as the row threatened to overshadow Rex Tillerson’s planned first official visit to Africa as US Secretary of State. On the eve of his departure for Africa, Tillerson had contrasted ‘the U.S. approach of “incentivizing good governance”’ with China’s, ‘which encourages dependency, using opaque contracts, predatory loan practices and corrupt deals that mire nations in debt and undercut their sovereignty.’ However, his attempt to return to the subject in Addis Ababa apparently elicited the response from AU Commission Chairman Moussa Faki that, not only are Africans ‘mature enough to engage in partnerships of their own volition’, but that ‘[t]here is no monopoly, we have multifaceted, multifarious relations with [different] parts of the world’.

The United States, European Union and China all play competing, contradictory and, sometimes, complementary roles in aid, trade and investment relations with Africa. These roles are all integral to processes of transformation under capitalism and imperialism, and thus merit considerably closer and more critical attention than that offered by either Faki or Tillerson.

Entirely coincidentally, a debate on imperialism and capitalism between John Smith and David Harvey, which would subsequently include Adam Mayer, Patrick Bond,  Walter Daum, Andy Higginbottom and Esteban Mora had started on the ROAPE Blog a few days prior to Trump’s outburst. This robust exchange includes among other things, the ‘changing landscapes of global capital’ (Mayer); the abandonment of ‘the concept of imperialism … in favour of a more open and fluid analysis of shifting hegemonies within the world system’ (Harvey); the ways in which  ‘production outsourcing to low-wage countries … implies new and greatly increased flows of value and surplus value to US, European, and Japanese TNCs from Chinese, Bangladeshi, Mexican and other low-wage workers, [in a] transformation [which] marks a new stage in the development of imperialism’ (Smith); and how and why ‘[t]he missing links in contributions from both Smith and Harvey relate to processes of sub-imperial accumulation and class struggle, especially at a time that so-called global governance (multilateralism) has successfully assimilated the potential challenge by the main bloc of semi-peripheral countries: Brazil, Russia, India, China and South Africa (the BRICS)’ (Bond). These are ongoing debates over the interpretation of existing theories of, and the advancement of the beginnings of a possible new theory for imperialism.

Indeed, if Trump was truly interested in why America attracts far fewer immigrants from Norway than from ‘shithole countries’ in Africa and elsewhere, he could do a lot worse than start his quest for enlightenment by considering these debates. He would, we assume, recognise global capitalism’s implication in ‘differential geographical mobilities of capital, labour, money and finance’ (Harvey), if only from his business dealings and family history, including his ‘many friends going to [African] countries, trying to get rich.’ It would be equally safe to assume, too, that he is attendant to the existence of a ‘global-scale buffer elite…which the imperial powers generally find useful in terms of legitimation, financial subsidisation and deputy-sheriff duty – even when anti-imperial rhetoric becomes an irritant….’ (Bond). Why else would he have allowed himself to be prevailed upon to write the letter of apology and reassurance mentioned earlier to the foremost African representatives of this elite? Alternatively, he would find Mayer’s preoccupation with ‘the fate of the subaltern and the excluded, the figure of the migrant who desires legal, social and cultural capital’ nothing short of bewildering, given his belief in the need for walls to police or control their movement and visa bans to deny them access outright. But it is the following extended excerpt from Smith’s Imperialist Realities blogpost in the series on roape.net which must possess the greatest potential for eliciting the infamous response of ‘fake news’:

the imperialist division of the world … has shaped the global working class, central to which is the violent suppression of international labour mobility. Just as the infamous pass-laws epitomized apartheid in South Africa, so do immigration controls form the lynchpin of an apartheid-like global economic system that systematically denies citizenship and basic human rights to the workers of the South and which, as in apartheid-era South Africa, is a necessary condition for their super-exploitation.

Yet while most of this is unlikely to even register directly with Trump in his pursuit of his America First policy, much of it remains central to an understanding of – and probably contains the elements for fashioning forms and strategies of resistance to – the types of capitalism and imperialism, which appear central to Making America Great Again. In a sense, then, roape.net and the ROAPE Blog are becoming increasingly important to the task of promoting radical political economy analyses and debates – of filling intellectual, academic and revolutionary voids.

Nonetheless, our articles and debates in the print and online journal, sister to roape.net in our endeavour, remain central to this task. Issue no. 155 contains four research articles and, exceptionally, an extended Debates Special Issue on the Egyptian revolution. Readers can access these debates articles for free from our website by registering and logging here. The issue as a whole also has a distinctly North African focus, with a particular interest in class dynamics and social movements, the meaning of capitalism and, finally, revolution and counter-revolution. Our hope is that it will be read as a demonstration of the continued vitality of Marxist analysis.

Reginald Cline-Cole is a member of ROAPE’s Editorial Working Group and teaches Africa studies at the Centre of West African Studies, Department of African Studies and Anthropology, School of History and Cultures, University of Birmingham, Birmingham, UK.