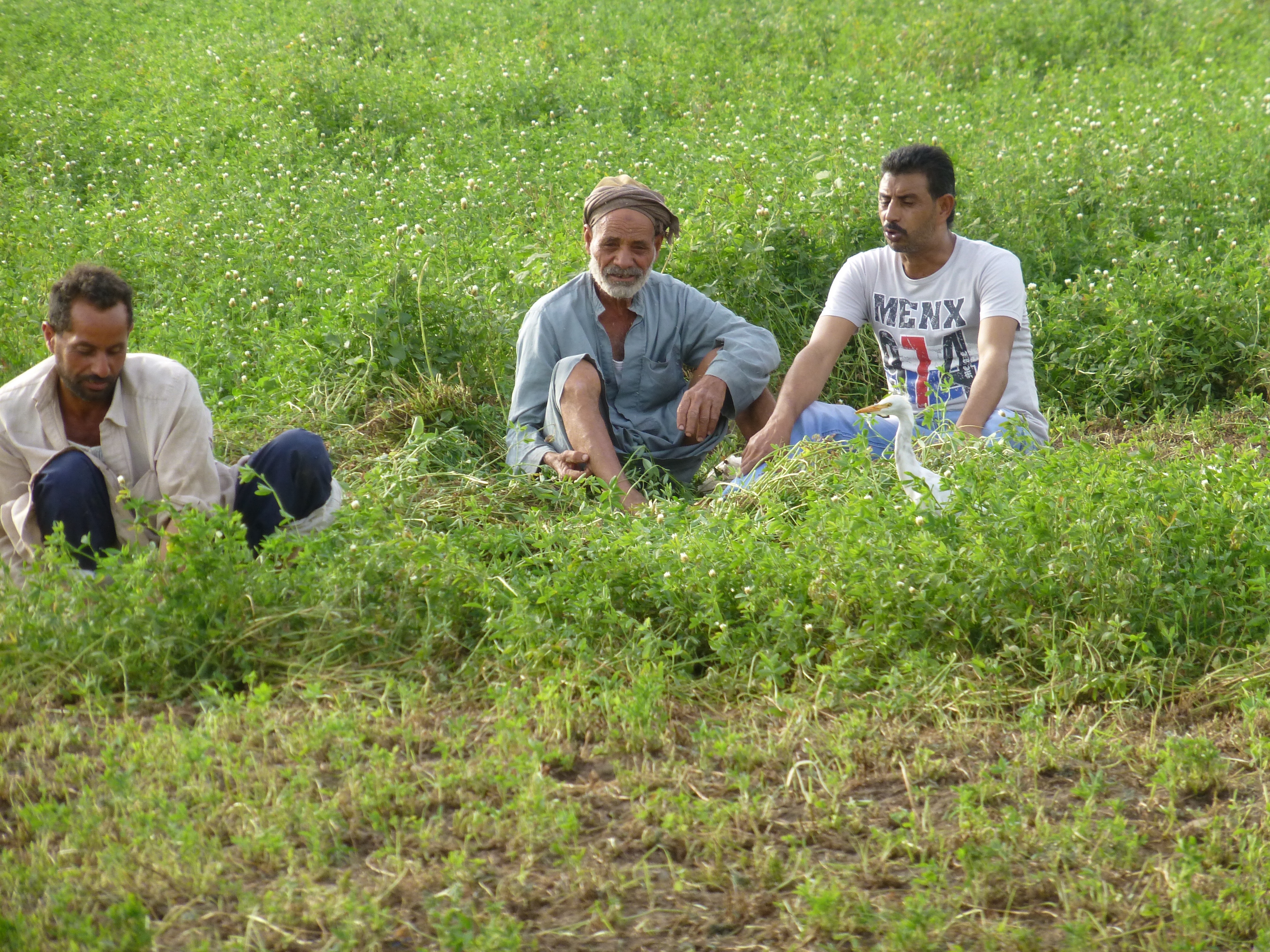 Two members of the Thimar collective, Habib Ayeb of the University of Paris – VIII, Ray Bush of the University of Leeds, several frequent collaborators of Thimar – François Ireton and Max Ajl – as well as Amine Slim and Corinna Mullin, spoke at a conference which Bush and Ayeb convened on Agricultural Policies and Food Dependencies in North Africa in Tunisia on Friday, May 29, 2017 at the headquarters of the Tunisian Forum for Social and Economic Rights.

Ayeb opened the forum. He pointed out that price inflation of Tunisia’s basic food crops and heritage crops, combined with wages failing to keep pace, was pricing Tunisians out of the market for the most basic healthy subsistence needs. A female agricultural laborer, for example, would have to work a full day to make enough money to buy a liter of olive oil.

After Ayeb’s opening, Ray Bush spoke on food security, sovereignty, and protest in Egypt and Tunisia. Bush discussed how prevailing plans from the Ministries of Agriculture discussed small farmers and their poverty, but gave scant attention to how small farmers had become poor. He framed their impoverishment in a longer-term analysis of the Nasserist legislation endowing peasants with permanent rights to use the land, as well as the revocation of the legislation in the early 1990s, leading to mounting differentiation and concentration of ownership. President El Sisi has stewarded the latest phase of the country’s rural planning regime. On the one hand at a recent meeting in Sharm el Sheikh the country’s leadership admitted that there was a ‘state of exception’ allowing for the violation of human rights. On the other, as one farmer observed, such policies and the poverty they were exacerbating could cause ‘the entire country [to] go up in flames’ if the government did not treat the people well. Bush also noted that capital has increasingly entered the agricultural circuit, seeking profits in the realm of 10-15 percent and tightly squeezing farmers’ revenues and surplus – the only available source from which to extract such incredibly high profits.

Bush also counter-posed food security based on trade to food sovereignty based on locally secured production. The former was triggering a ‘global subsistence crisis.’ As a consequence, protests around both agriculture and land have become ‘systemic and systematic.’ Against this tableau, he proposed we attempt to generalize categories of analysis that allow us to understand this crisis, and to confront the issue of our time: delivering accessible and available food to the world’s poor in a way that is sustainable for the planet. Food sovereignty, he suggested, is the answer.

Max Ajl of Cornell University examined similarities and differences between the discourse and movements fitting under the umbrella of food sovereignty, delinking, or breaking from the global law of value, as Egyptian economist Samir Amin, conceptualized it. There are, Ajl argued, strains of Tunisian populist agronomy and economics which built creatively, organically, and locally from the de-linking tradition.

Ajl began by historically situating the emergence of food sovereignty amidst the gestation of La Via Campesina in the ruin which Latin American neoliberalism created. Against this social breakdown, popular struggles drawing on liberation theology and peasant movements drawing on indigenista thought combined with the more traditional left to build a variety of continental peasant movements engaged in struggles for land and control over food production. These movements had coalesced into La Via Campesina (LVC) by the mid-1990s, which then spread to South Asia and sub-Saharan Africa and the North Africa region.

He then noted that LVC’s proposed technics for food sovereignty was agro-ecology. The institutions responsible for ensuring food sovereignty shift in different LVC statements and position papers between the people, the nation, and the state. The Latin American governments, pushed by popular pressure, have put in place programs and constitutional architecture to help their countries achieve food sovereignty.

Ajl compared the program of food sovereignty with that of delinking, focusing on the question of national autonomy over the productive matrix – their most compelling point of convergence. As a mode of analysis, delinking was unevenly attentive to the ecological question. In contrast, Tunisian popular agronomy was incredibly attentive to ecological issues, with economists and agronomists like Abdeljelil Bedoui and Slaheddine el-Amami putting forth programs for agro-ecology well before the phrase had become common. Ajl then compared and contrasted the three frameworks, noting the centrality of food and rural issues to any anti-systemic project as well as the currently-existing anti-systemic projects outside of the region.

Francois Ireton of the CNRS used FAO statistical data to compare food production and consumption in Tunisia and Egypt from the immediate post-colonial period until the present. He noted that calorie consumption in both countries had increased since the post-Independence period, with a lower and lower percentage of overall calorie production coming from cereals. Meanwhile, both countries had become severely dependent on imported cereals, in part because of extensive diversion of cereal stocks to feed livestock.

Ireton also observed that Egypt had a smaller proportion of its cereal calories coming from wheat than Tunisia, and a more mixed cereal basket. At the same time, Egyptians consume a higher percentage of their daily calories in cereals than do Tunisians. And Tunisia has experienced a massive increase in the use of barley for animal feeding since the 1960s.

Amine Slim, a researcher at the National Gene Bank, suggested that the farmer was a ‘key’ actor in the conservation of biodiversity. He pointed out that there was ongoing ‘genetic erosion’ within Tunisia, with just five varieties of barley and wheat commonly cultivated, whereas in 1940 farmers commonly cultivated 50 types of these cereals. Furthermore, agriculture itself, in its search for high yields, had moved to the simplification of agriculture in the form of monoculture.

He suggested that agriculture can promote biodiversity through ecosystem services and retaining humidity in the soil, as well as carbon-fixing, and promoting the preservation of ecological knowledge. He also argued for in situ conservation of genetic diversity, with would imply the maintenance of a viable population of cultivars and land-races on the land. The Gene Bank is involved in some of these efforts, working with ICARDA and the FAO, and enlisting farmers in the effort.

Slim also compared the nutritional profile and resilience of traditional land races with the Green Revolution imported varieties. The former produce far more hay per hectare, and also have far higher percentages of protein – up to five percent higher in wheat and semolina (up to six percentage points more protein) making a far more complete nutritional profile. The imported wheats are also more vulnerable to disease than traditional wheats. The Gene Bank has also started a program to restore older barley land-races, often going to the relatively isolated islands of Jerba and Kerkennah to gather genetic material. Slim noted that local practices and knowledge allow for a greater capacity for local management.

Concluding the presentations, Ayeb gave a panorama of colonial and post-colonial land tenure and agricultural planning systems. He analyzed the conversion from collective land under pre-colonial usufruct rights – the right to use something belonging to another – to the colonial and post-colonial emphasis on private ownership and leasing. The post-colonial state, he pointed out, had played a profound role in pushing for the de-collectivization of lands. He juxtaposed the state’s role in destroying collective ownership outside of its aegis with pushing for collective ownership through cooperatives under its aegis and highlighted how the 1960s cooperative program had dismantled large swathes of family, petty commodity, and subsistence production across Tunisia.

Ayeb insisted that the ownership of land is central for understanding food dependence in Tunisia. Sidi Bouzid, for example, a governorate with rates of landlessness and massive inequality in land ownership, is also one of the main arenas for agriculture in the country and yet one of its poorest. There has been a massive inrush of investment, knowledge and ‘development’ yet it remains, Ayeb explained, poor and dispossessed, the outcome of the dispossession of the primary producers.

Ayeb also discussed how the attempts or programs for modernization were based on emulating the techniques of the old colonial land-holders. Accompanying such a program was the notion that peasants, in the words of some of the planners, were a ‘force of inertia,’ and what was needed was to ‘transform the structure of production, the mentalities,’ a frequent theme and expression of government planners in the 1960s, with abundant evidence of its omnipresence. Finally, he pointed out the fundamental distinction between food sovereignty and security, with the latter based on the mantras of trade and comparative advantage whereas the former was about substantive social empowerment.

During the concluding discussion, Corinna Mullin of the Tunis Business School discussed the possibilities of what regional integration might signify for the possibilities of food sovereignty, pointing out that different countries might have different advantages. She also discussed the role of the free trade treaties in hollowing out Tunisia’s productive structure, including its agricultural system, and argued that they are a mechanism of imperialist control.

Ajl also raised the question of regional integration, pointing out that it had been a constant through the 1970s and 1980, and that many of Amami’s proposals for arid land agricultural development had been first voiced during pan-Arab meetings. He also discussed the importance of national projects, and the fact that countries which were under pressure from the US state have tended to be those countries which either in the near past or present had asserted or were asserting control over their national rural sectors.

Max Ajl is an activist and scholar, his research focuses on agricultural development policy in North Africa, state subsidy policy, and the world commodity markets.