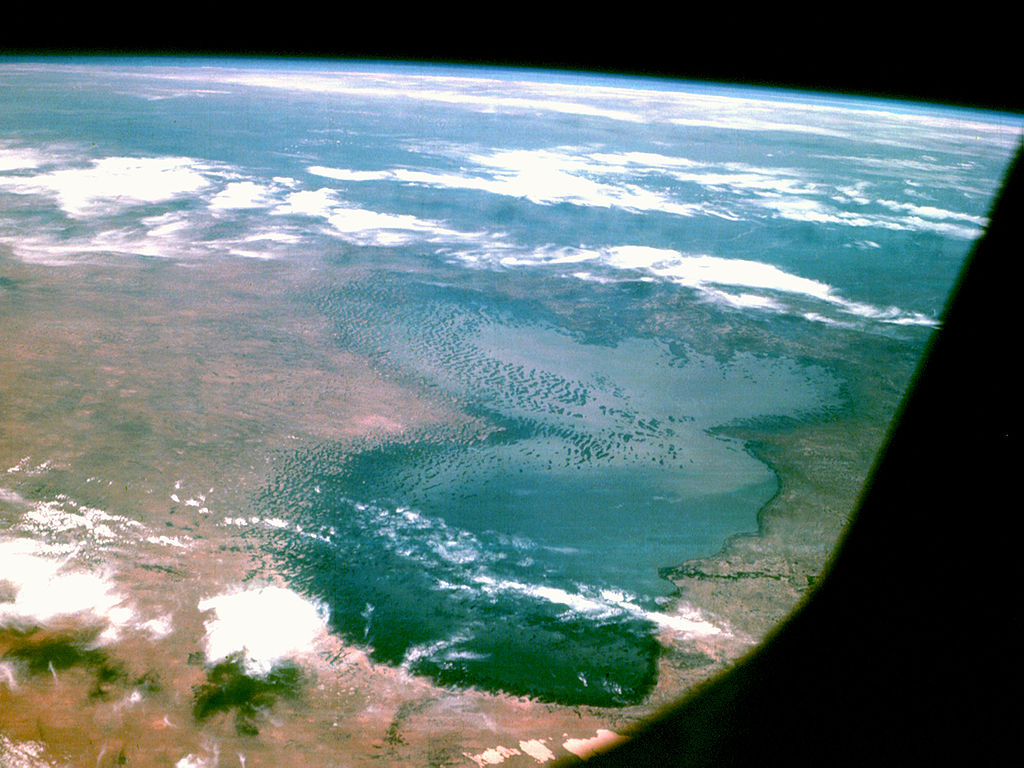 Following a fascinating ROAPE/TWN workshop in Accra in November 2017, several vital questions were raised about radical economic development on the continent. In this blogpost I want to focus on the issue of climate change, economic growth and transformation.

Climate change is just one of a range of factors which suggest that continued economic growth and development under capitalist conditions is not compatible with our current society. Africa is being hit hard by global warming (experts estimate the continent will be affected 50 percent more than the global average) and may lose 50 percent of its food production by 2020. At the same time, its population is expected to double by 2050 and again by 2100.

In place of development (national or otherwise), I argue, we need to be campaigning for the redistribution of wealth – i.e. demanding the more equitable distribution of existing wealth, rather than greater economic growth in the hope that some of this additional wealth will trickle down to the poor majority.

Debates at the workshop discussed the nature and influence of the Russian revolution. I am of the view that there was a counter-revolution in Russia led by Stalin in the late 1920s and the 1930s that led to the emphasis on socialism in one country and national economic development rather than redistribution of wealth. This move was attractive to the first wave of African leaders after independence due to the rapid economic growth arising from state-led development in the Soviet Union. So Marxism came to be associated with faster state-led economic growth rather than spreading existing global wealth more equitably (for an account of the influence of the revolution on the continent, see Matt Swagler’s post here).

We need a return to the ‘classical’ Marxist tradition and to break with calls for further national economic development, or for what Samir Amin has labelled the ‘national sovereign project’ (see his interview on roape.net here).

Climate change is only one factor or planetary boundary in what Marx call the metabolic rift – the break between humans and their natural environment that was triggered by capitalism. He used the term to conceptualise the ecological crisis inherent in capitalism, and it’s the break in the ‘interdependent process of social metabolism’. This rift or break between humanity and the rest of nature is generated by capitalist production and the rupture between country and town (see John Bellamy Foster’s work for a full description of this process).

Part of this process, this catastrophic rupture of humanity and the natural environment, also includes other processes. There are many examples of the metabolic rift generated by capitalist production on a global level: For example, the extinction rate of species may currently be a thousand times the rate of the last few million years. Ocean acidification has led, for example, to the bleaching of coral reefs. Biochemical flows, mainly through the widespread use of nitrogen and phosphorous fertilisers have resulted in algae blooms. Deforestation has cost the world nearly 40 percent of its forests contributing to climate change and loss of genetic diversity.  Nigeria, for instance, only has 10 percent tree cover left and is losing more forested areas each year. Furthermore, freshwater use has led to a lack of safe water for humans. One in five Nigerians do not have access to safe drinking water. There is also what has been called ‘water wars’, for example, the Ethiopian threat to dam the Nile and China’s great dams. Finally, atmospheric aerosol loading has led to air pollution and smog (made worse by European diesel manufacturers fiddling the emission tests on their cars). An estimated three million people each year die prematurely due to air pollution.

In Nigeria, for example, climate change has already had catastrophic impacts. It has been a major cause of the Boko Haram insurgency in the North East of the country. Lake Chad, that borders North Eastern Nigeria, Cameroon, Chad and Niger, was once the largest fresh bodies of water on the African continent. It was a major source of fish and provided irrigation for millet and sorghum that was eaten across Nigeria and the region. The lake provided livelihoods for thousands of communities. However, according to the United Nations, the lake has shrunk by as much as 95 percent since 1963. The Doron Baga settlement, which used to be by the lakeside, is now 20 kilometres from the shore. Among other elements, Boko Haram has fed directly from the economic collapse –  the ‘rift’ in the complex interdependence between human settlements and nature –  around Lake Chad. In February 2017, the Governor of Borno State claimed that the Boko Haram insurgency had resulted in 100,000 deaths and over two million refugees in his state alone.

The example of China’s rapid economic growth also illustrates graphically the exhaustion of capitalist development, or in Marx’s term the rupture between humanity and our natural environment.  To fulfil its global climate stabilization obligations, China needs to reduce its fossil fuel consumption by nearly 70 percent before 2050. This is needed to fulfil its commitment to reducing global carbon dioxide emissions. So, between 2010 to 2050, China plans to build 2,000 giga-watts of ‘clean electricity’ (about twice as large as the present size of the entire U.S. electricity generating capacity). But this projected massive growth in clean energy will be insufficient to offset the necessary decline in fossil fuels. As a result, Chinese energy consumption will have to decline at an average annual rate of 0.8 percent from 2010 to 2050. How is this conceivable within capitalist development?

Transposing this scenario to the world scale means that the path to economic development of the Global South based on carbon fuels (coal, oil & gas) has been cut off. The current level of CO2 in the atmosphere will result in at least a two degree increase in temperature –  in other words, we cannot add further emissions in the future. Recently these arguments have been made by Jason Moore, using the concept of ‘Cheap Nature’ he writes, ‘capital is seeking profitable investment opportunities in a world in which there are really no more significant frontiers of Cheap Nature. These are not significant enough, in my view, to relaunch another golden age of capitalism.’

The Paris Agreement of December 2015 aims to keep global warming to within two degrees and preferably below 1.5 degrees, but according to the Swedish scientist Staffan Laestadius global temperature may have already increased by almost 1.4 degrees centigrade over the last hundred years. Commitments agreed in Paris will probably double this at least, especially as Donald Trump has pulled the US out of the agreement. Trump is not alone, each of the ten Republican candidates in the last presidential race agreed that climate change was a non-subject.

It has taken 50 years for the current restrictions on tobacco to come into force, but this dangerous and addictive drug is still legal. In this case the answer is simple – stop smoking to avoid the risks of cancer.  With climate change it is not so simple, the people responsible for the mess are not those that suffer. The rich can continue to drive oil fueled cars, or expensive cutting-edge electric vehicles, while the global poor starve as land is purchased (or ‘grabbed’) by multinationals and foreign governments for the production of fuel or food for export.

There are solutions. Ultimately, it is estimated that to have an 80 percent chance of not exceeding a two degree increase in temperature then 80 percent of the fossil fuel reserves needs to be left in the ground.

If oil production was reduced, especially with co-ordination across OPEC and other oil producing countries, the price would go up and the oil producing countries, like Nigeria, could theoretically gain the same income from a reduced level of oil production. This is why Environmental Rights Action (based in Nigeria) for example, has been supporting local communities in their call for ‘leaving oil in the soil’, and they are demanding that no new oil fields should be developed.

And yet, how will the government of Nigeria manage its budget if 80 percent of the remaining oil is left in the ground? Half has already been extracted. So only the equivalent of a fifth of what has been extracted can be used as revenue for the Government.  In other words, in such a scenario, the Government has already had most of total possible income from oil.

Also, shifting to a low-carbon economy requires a dramatic transformation of physical facilities and skills, and fundamental changes in energy, transportation, and industrial processes. This process of construction and adaptation to a post-fossil fuel world will demand major technical innovations and very large financial investments. These are tasks that arguably can only be undertaken in a post-capitalist society and on a global level.

In addition, bringing in other factors or the ‘planetary limits’ listed above, means the current rate of global production and consumption has to contract sufficiently to allow for any future population growth – which remains high in Africa (about 2.5 percent a year).  We need a real paradigm change. Rather than more growth, we need to ensure that current resources, wealth and income are shared more equitably.  We currently produce enough to meet the needs of the many, but not the greed of the few.

This is only likely to happen if we have economies that are democratically planned.  Massive investments will have to be planned and companies have to be prevented from using oil, coal or gas. The current dominant neoliberal ideas (the free market, private sector emphasis etc.) run counter to this essential logic.

Economic and environmental development has rendered the nation-state incapable of solving the most pressing issues of human and social transformation. We therefore need a comprehensive change of direction if the world as we know it is not going to be destroyed completely. The longer this takes to happen, the more difficult the environmental problems that the new society will have to face.

These questions, the global environmental crisis and its impact on Africa, are central to our agenda of radical political and economic transformation on the continent. The workshop in Accra significantly contributed to these debates.

Featured Photograph: Lake Chad as seen from Apollo 7 in 1968.