A ‘green’ revolution in Africa

The Rwandan government – supported by major international donors – has high ambitions to modernise and professionalise the agrarian and land sector to turn Rwanda from subsistence farming into a ‘modern’ and ‘developed’ country. Its reform fits into a broader call to implement a Green Revolution in Sub-Saharan Africa (SSA). It is believed that formalisation of land tenure, investment in modern inputs, and commercialization will drive increased production of selected marketable crops, which will be profitable for smallholders if they are integrated into commercial commodity chains. This, in turn, is expected to lead to increased national food security, exports and growth at the national scale (see Knickel et al. 2009).

However, several studies in SSA have shown that there are considerable negative impacts of the Green Revolution policy for significant sections of the rural population, especially poorer socio-economic groups, and more vulnerable farmers. This blogpost focuses upon three key policy dimensions in Rwanda’s agrarian and land sector modernisation: land registration, the Crop Intensification Policy (CIP) and cooperatives. It combines the findings of nine researchers who have done in-depth, qualitative research on the impact of Rwanda’s rural modernisation policies. By combining their findings, these studies cover a broad variety of settings and regions, reaching a fairly broad geographical scale, as the map suggests.

This map indicates the locations of research 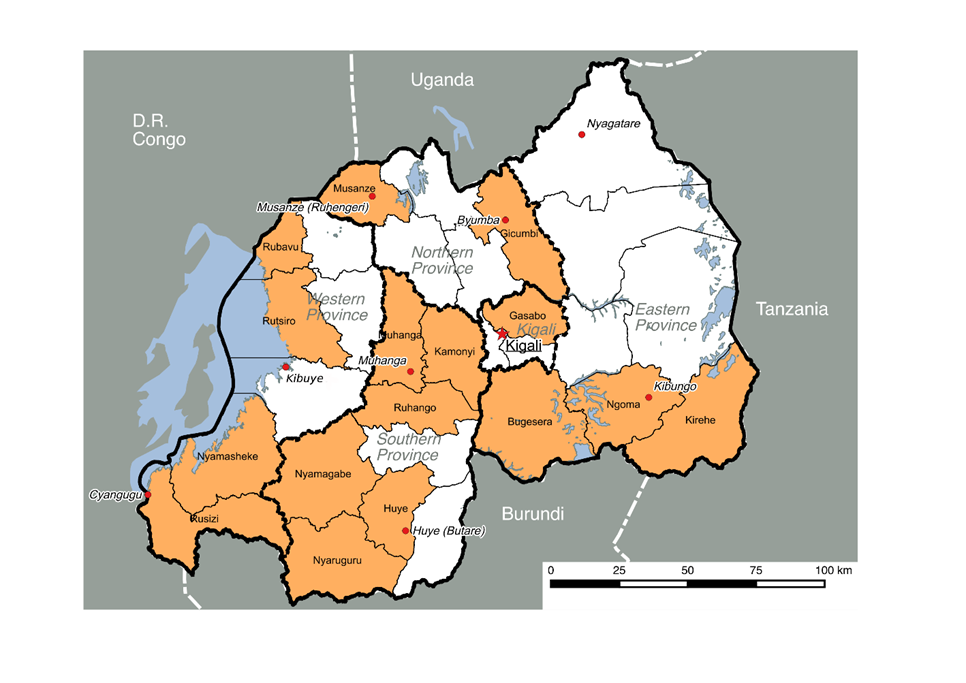 The authors did not cover entire districts but locations in districts highlighted in this map.

The use of statistics in Rwanda

In and outside Rwanda, statistics validate the government’s claim of increased agricultural productivity and poverty reduction as they are viewed as a major instrument in policy design, implementation and evaluation (see Ansoms et al. 2017). However, we argue that they do not adequately capture the impact and success of Rwandan agricultural and poverty-reduction policies. ‘The problem is not a lack of data availability – the GoR undertook significant and laudable efforts to make their datasets publicly available – but rather that different data sources contradict each other and there is no way of telling which dataset is more reliable’ (Desiere et al. 2016, 10).

On the basis of thorough analyses of statistical data, we claim:

Yields probably increased over the period of the implementation of the agricultural reforms, but less than what the most optimistic but least reliable data source (FAO statistics) suggests (see Desiere et al. 2016).

A nuanced view upon rural development

Land registration:  Despite land registration, land conflicts are still widespread and often concern parcels that have already been officially registered. Because people often do not report the transactions of officially registered land, particularly not in the case of small land plots, new land conflicts are likely to arise. In addition, farmers are worried about the ways in which a land register allows authorities to ‘govern’ land rights, as an updated register is a very efficient tool for authorities to push farmers into centrally-organised modern farming systems or to exclude those who resist from access to land.

Crop Intensification Programme (CIP): The Crop Intensification Programme started in 2007 and entails 1) land use consolidation; (2) sale of fertilisers and improved seeds; (3) provision of proximity extension services; and (4) improvement of post-harvesting handling and storage. It aims to transform Rwanda’s family-farming into a professionalised sector, and is oriented towards the sale of target crops rather than home consumption. However, on the basis of our evidence, we argue that the CIP is a model that is too simple and rigid as it operates in a complex and variable human, climatic and agro-ecological context. It has often proved to be counter-productive in terms of food and tenure security for the poorest households and other vulnerable groups.

Cooperatives: It is through cooperatives that CIP crops are brought to the market and they are key structures in the organisation of the new agrarian model. Not only do they allow for a more coordinated agrarian approach with its emphasis on scale-effects in collective, more efficient, production schemes, they are also instruments in a top-down state-controlled governance model. At the level of implementation, several gaps facilitate the structural exclusion of poorer socio-economic groups, and more vulnerable farmers. This will continue as long as the heterogeneous socio-economic background of farmers is not taken into account. Top-down approaches tend to lead to a financial burden, to production schemes, and to opaque management structures which undermine the cooperatives’ claim for inclusiveness.

Exclusion of poor and vulnerable groups

Our data suggest that for many small-scale farmers the aforementioned policies lead to increased land-tenure and food insecurity, tensions and the exclusion of vulnerable groups. Furthermore, there is limited space for policy transgression and advocacy by CSOs because of the rigid top-down character of Rwanda’s governance system.

Moving beyond the Rwandan case

This blogpost also tries to add a layer of complexity to the assessment of the Rwandan agricultural modernization effort and provides three important insights (that extend beyond the Rwandan case):

Large-scale statistics overlook in-depth realities:  Empirical evidence derived from both statistical analysis and micro-level qualitative research problematizes the overreliance upon state-generated national-level statistical analysis. Not only does this information source risk being misleading in case of shaky methodologies, but it is inherently designed to overlook and simplify the complex details of social reality (see Dawson 2015).

Generation of statistics has a normative dimension:  National-level statistics are instrumentalized by governance structures to make reality legible. The creation of statistical information is not only a descriptive activity, but a highly normative one: it narrates reality, and in doing so, it shapes it in conformance with the vision held by the central observer.

Top-down approach is blind to unexpected patterns:  This ‘panoptical view’ (Scott 1998) is, because of its central and typifying nature, blind to dynamics that do not fit into expected patterns of behaviour, economic activity or interests. This risks creating vicious cycles in which the evaluation and re-formulation of state policy does not benefit from grassroots feedback and from the social responses to their requirements. The transgression of strict policy implementation guidelines and rules are signifiers of such distance between centrally-planned policies and real local life, but the top-down approach of Rwanda policy-making makes it so that they are rarely acknowledged beyond the local context.

As an overall conclusion, the authors plead for a more nuanced, in-depth and multi-faceted research approach in order to understand the distance between centrally-planned policies and the realities of rural livelihoods.

Prof. An Ansoms (Université catholique de Louvain-la-Neuve, Belgium) has over 15 years of experience on natural resource conflicts and challenges for rural development in the Great Lakes Region of Africa.

Giuseppe Cioffo, MA (Université catholique de Louvain-la-Neuve, Belgium) is involved in research on agricultural modernization in Rwanda and is a Program and Policy Officer at the European network for Central Africa (EurAc).

Dr Neil Dawson (University of East Anglia, UK) is a specialist in poverty, wellbeing and environmental justice research among rural populations in developing countries and is a member of The Global Environmental Justice Group that studies linkages between social justice and environmental change.

Dr Sam Desiere (Ghent University, Belgium) is an expert in statistics and has focused on data quality of household surveys in developing countries, including Rwanda and Burundi

Prof. Chris Huggins (University of Ottawa, Canada) is a researcher, lecturer, and trainer with more than 15 years of experience on land and natural resources rights in Sub-Saharan Africa, particularly the political economy of land and agricultural reform.

Dr Aymar Nyenyezi Bisoka (Université catholique de Louvain-la-Neuve, Belgium) has expertise on land grabbing by local elites and issues of power and resistance in relation to access to natural resources in the Great Lakes Region of Africa.

Johanna Treidl, MA (University of Cologne, Germany) is conducting research into the social and cultural dimensions of wetlands in Rwanda, with a focus on gender and food security.

Huggins, C. 2014b. Restrictions on Land Use Rights in Rwanda: Understanding the ‘Bundle of Land Rights’ in Context. Focus on Land in Africa (FOLA) Brief.

Scott, J. 1998. Seeing Like a State. How Certain Schemes to Improve the Human Condition Have Failed. New Have and London: Yale University Press.