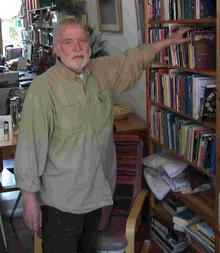 On 16 June 2017, Peter Waterman died in his sleep, his wife by his side. From his teens into his thirties, he dedicated himself to communism though abandoned that cause after Soviet tanks crushed the Prague Spring in 1968. He transitioned to an academic, his graduate studies on the history of dockworkers in post-WWII Lagos, Nigeria. For the next forty-five years, he wrote, taught, and spoke about—and for—working class people, mostly in the Global South. He remained, always, firmly on the Left as a historian, theoretician, and ally of working class people and struggles, in the labour movement and outside of it. His most important scholarly and theoretical contributions are on the vital matters of labour internationalism and solidarity.

Peter was born in 1936 in London’s East End to East European Jewish immigrants. His father was a Communist Party member and, later, managed the UK’s largest communist bookstore; his mother wrote several novels. Peter became involved in politics at a young age in postwar England, a time—it should not be forgotten—of deprivation as the country sought to rebuild after the victory over the fascists. But postwar England also was a time of positive change in Britain as the Labour government nationalized several key institutions—most importantly the railroads, coalmines, and medical institutions, the latter called the National Health Service (NHS). For a young Communist, heady times indeed. In 1955, already involved in Communist youth activities, he set off for Prague to work as an English language editor of World Student News, the magazine of the International Union of Students; originally created to connect university students from countries that had fought fascism during World War II, it increasingly became a Soviet-allied organization—no problem for Peter.

After three years in Prague, in 1958 he returned to London, where he did a year of compulsory military service and then attended the union-affiliated Ruskin College. He earned a Diploma in Social Studies and then a bachelor’s degree from Oxford University through Ruskin. He also met his first wife, Ruthie Kupferschmidt, a Dutch Jewish woman and fellow Communist. Appropriately, they met on an Aldermaston march, a legendary annual event begun in 1958 by the Campaign for Nuclear Disarmament (CND) in which opponents of nuclear weapons marched 53 miles (from Adlermaston, the center of the British nuclear weapons industry to London) to protest the dangers of nuclear war. Peter and Ruthie lived in Oxford where they had two children, Daniel (“Danny”) and Tamara.

In 1966, he returned to Prague to work at the headquarters of the World Federation of Trade Unions (WTFU), the Soviet-dominated federation of labour unions and rival of the International Confederation of Free Trade Unions (ICFTU)—the latter being born out of a Cold War split in 1949. It was during this stint in Prague that he first became interested in African unions and politics as he worked at the Africa desk of the WTFU information department. In his duties, he got to know the representative of the South African Congress of Trade Unions (SACTU) and other African trade union activists.

Of course, his time at the WTFU overlapped with the Prague Spring which deeply affected him (and countless others). Subsequently, he forever left the Communist Party and, more generally, Soviet-style communist politics.

From 1970 to 1972, he lived in Nigeria where he conducted research on Lagos dockworkers and the Nigerian trade union movement as he taught History at Ahmadu Bello University in Zaria. His thesis on dockers earned him a M.A. at the University of Birmingham in West African Studies. He lived in Nigeria during chaotic and important times, in the aftermath of the Biafran (or Nigerian Civil) War. Demonstrating his modest, humorous demeanor, I asked about the dangers of living in Nigeria during this era and he replied that the fighting was in another region of the country, the Southeast, while he mostly lived in the North. His thesis examined dockworkers in the port of Lagos from the 1940s through the 1960s and took a very critical position towards the union leadership.

Master’s thesis and degree in hand, he found a position in the Labour Studies program of the Institute of Social Studies (ISS) in Den Haag (The Hague), Netherlands where he worked for twenty-six years. ISS is a stand-alone research institute with a relatively small number of students and heavy research agenda. Along the way, he earned his Ph.D. from the ISS, which expanded on his M.A. research and published as Division and Unity amongst Nigerian Workers: Lagos Port unionism, 1940s-60s (The Hague: Institute of Social Studies, 1982). The book, which he referred to as “socialist labour history,” criticized the union’s leaders for being far too “moderate,” a bad word to Peter, who preferred the “radicals”; that is, the union’s leaders seemed content with minor improvements while allowing the division of workers along craft lines—as always, to the benefit of the more skilled (and, hence, better-paid) port workers and to the detriment of lesser skilled, casual dockworkers.

The 1980s involved multiple transitions. Peter transferred to the Politics of Alternative Development program at ISS. Meanwhile, he and Ruthie, who worked as a teacher and then artist, divorced. For many years at ISS, he edited the Newsletter of International Labour Studies. He wrote about the dockworkers in Barcelona, who belonged to an organization the Coordinadora that possessed a long tradition of militancy, internationalism, and rank-and-file power. In keeping with his teaching agenda and politics, he researched and wrote about Filipino, South African, Indian, Peruvian, and other nations’ labour and social movements and, more generally, global social movements.

He returned to Africa, literally, when he accepted a visiting teaching position at the University of Natal-Durban (now University of KwaZulu-Natal) Westville campus in 1993-4. Although the apartheid era was nearly over, the Westville campus remained predominantly Indian. Peter was present during as tumultuous a year as any in modern South African history. Although he collected materials on trade unions including dockworkers in Durban, he never wrote much about that subject.

In the 1990s, he also met Virginia Vargas who held a position at the ISS for some years. Gina, as she goes by, hails from Lima, Peru and is a long-standing, influential activist and writer. In the 1970s, she helped build the Peruvian women’s movement, founding the Flora Tristán Center. She helped organize the very first World Social Forum (WSF), in 2001 in Puerto Alegre, Brazil, and remains on the governing council. Peter also became active in the WSF. Thanks to Gina, he spent several months in Lima every year as Gina did in Den Haag. After being together for about twenty years, they married in 2012.

In the 2000s, Peter continued to research, talk, email, and write. In fact, his formal retirement did not seem to slow him down. He worked with the Network Institute for Global Democracy (Helsinki), Programa Democracia y Transformacion Global (Lima), and India Institute for Critical Action-Centre in Movement (New Delhi). He also served on the board of the online journals, Interface: A Journal for and about Social Movements and the Global Labour Journal. A great many of his papers, correspondence, and notes are archived online and in the Peter Waterman Papers at the International Institute of Social History in Amsterdam.

Waterman remained committed until the very last to internationalism and the key role that labour must play in any transformation to a post-capitalist order. What that looked like, of course, remains to be determined. He appreciated, better than most, the failures of Marxism and the Soviet Union. In addition to the collapse of the Soviet Union and most of its allies, neoliberal globalization has weakened workers and unions across the Global South during the past several decades. That does not mean, however, that workers and unions are to be ignored—far from it. However, Peter firmly believed that any movement of workers must ally with other social movements including women’s organizations, environmental groups, and others that promote social justice. That is, class analysis alone could not explain the historical moment we currently live in, nor could it—alone—advance humanity beyond capitalism. He also called upon scholars to evolve. Writing in 2005 about the ongoing retreat of labour unions, in the face of “globalized networked capitalism,” Waterman contended that “labour history [also] has to start again.” To do so, Waterman relentlessly promoted international solidarity, as a force, a movement, and a theory. He wrote a great deal, over the past few decades, to more fully theorize what, in fact, “solidarity” meant. In short, if neoliberalism is to be slain workers must practice labour internationalism, joining with other social movements in solidarity.

Peter demonstrated a willingness to see the world anew through fresh eyes, not a trait often associated with 70-something people. (Currently, the world’s most dangerous septuagenarian, Donald Trump, dreams of winding the clock back to the 1950s.) Of late, Peter wrote an autobiography entitled From Coldwar Communism to the Global Emancipatory Movement: Itinerary of a Long-Distance Internationalist; no doubt, it sits on the bedside table of the President of the United States.

In his later years, Peter maintained communication with several generations of younger scholars who found his work and, then, him. One of those is Katy Fox-Hodess, a Ph.D. student at the University of California at Berkeley. She praised Peter for conducting “research on union democracy and labour internationalism. I also appreciated his rejection of orthodoxies and interest in, for example, feminist perspectives, which I would say really put him ahead of his time.”

I also found Peter late in his life. When I emailed him a few months ago, in advance of a visit to nearby Amsterdam to conduct research at the wonderful archives of the International Institute of Social History, Peter quickly invited me to stay with him and Gina. He said that he could offer me “drinks, good food, conversation, and his shelf of books on dockworkers.” I gladly accepted his offer though he warned me that he might have to cancel as he needed to undergo some medical tests for an issue with his heart.

As it so happened, just one week before he passed away, I spent a lovely and illuminating evening, night, and morning with Peter, Gina, and his son Danny. Sure enough, it began with Jameson’s, included a lovely vegetarian meal, and several long sessions talking dockworkers, politics, anarcho-syndicalism, Africa, and the like. I came away energized. Of course, I was shocked when I received word—just seven days later—that he had passed away.

Peter is survived by his wife, two children, two grandchildren, and countless friends, colleagues, and comrades. Tributes have poured in from across the globe. Peter lived an exemplary life of a scholar-activist. Though I barely knew him, I am confident that he would be pleased that this remembrance ends as follows: Peter Waterman presente!

Peter Cole is a professor of history at Western Illinois University (USA). Currently, he is revising Dockworker Power: Race, Technology & Unions in Durban and the San Francisco Bay Area (University of Illinois, forthcoming). He is a co-editor of Wobblies of the World: A Global History of the IWW (Pluto Books, forthcoming) and, previously, authored Wobblies on the Waterfront: Interracial Unionism in Progressive-Era Philadelphia (University of Illinois, 2007). Cole also is a Research Associate in the Society, Work and Development Institute (SWOP) at the University of the Witwatersrand in Johannesburg, South Africa.