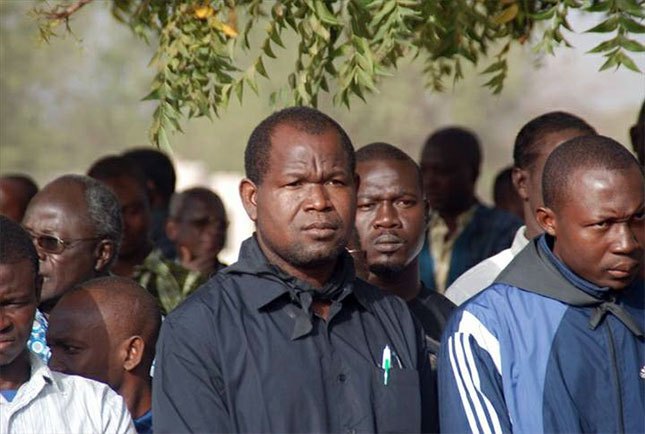 Life is like a cord, as one speaker at his funeral said, some are long, others are short, but what counts is that it carries something. André Tibiri’s cord was short, but it carried so very much. A central figure in the last two decades of social struggles in Burkina Faso, a charismatic leader of the student and youth movements, an honest and dedicated militant for democracy and social justice, André passed away, aged 46, on 24 May 2017.

Student struggles in the 1990s

André began his studies at the University of Ouagadougou in the early 1990s, during the first years of the regime of Blaise Compaoré, who became President after the shooting of Thomas Sankara in 1987- a period characterised by the harsh repression of social movements in Burkina Faso, particularly the student movement. The death of Dabo Boukary, one of André’s comrades at the university, marked the starting point of his struggles. Dabo was killed in 1990 after the Presidential Guard had violently put down a student demonstration.

André rapidly became a key figure in the student struggle in Ouagadougou, the Burkinabè capital. From 1995 onwards, he was president of the Association Nationale des Étudiants du Burkina (ANEB, National Association of Burkinabè Students), the branch of the Union Générale des Etudiants Burkinabè (UGEB, General Union of Burkinabè Students) at the University of Ouagadougou, and from 1997-2001 he was president of UGEB. In 1996-1997, he led the massive protests to demand greater financial support for students, a wave of mobilization that would eventually lead to the creation of the Aide FONER (Fonds National pour l’Éducation et la Recherche, National Fund for Education and Research), a refundable grant for undergraduate, graduate and doctoral students, which until today, is one of the most important achievements of the student movement.

In 1997 André, together with three other activists, was arrested and accused of issuing “death threat[s], willing coups and injuries, and damage of public goods”. He was locked up in the Maison d’Arrêt et de Correction de Ouagadougou (MACO, the main prison of Ouagadougou) for 45 days. This was not the only price he had to pay for his commitments: The granting of his PhD in biology, focusing on the biochemistry of natural substances, was also delayed in response to his activism. Despite such hurdles, André had fond memories of the turbulent times in the late 1990s, which were characterized by great social and political upheaval.

In an interview in 2013 André reported that one day a student whom he did not know stopped and greeted him on the street. The student asked: “Tibiri, what about your thesis?” He replied: “I am still doing it, and I think I will complete it soon.” “You have to keep up your courage”, the student said. “We are praying for you all day.” As André emphasised, “It is an honour to me, and I am proud that I have benefitted from the confidence of thousands of youth traversing the campus.”

The student protests focused on conditions on campus, on the forced introduction of the BA/MA system, and on the unrelenting and repressive way the regime of Blaise Compaoré reacted to their claims. André’s keen analysis of the overarching context, in particular the impact of Structural Adjustment Programmes (SAPs) urged by the World Bank and the International Monetary Fund, was highly appreciated by his fellow students. “Most of these measures [inspired by the SAPs] are taken without considering the social situations of the students and lecturers”, André explained in the 2013 interview “After the measures of expulsion and intimidation of the population, [the regime] launched a charm offensive addressing the media, by announcing the investment of millions of CFA Francs for capacity building, infrastructure, and enhancement of the students’ social situation. But for me, the veritable Achilles’ heel of all this are the SAPs: We have to break through the SAPs if we wish to get out of this situation.”

Unity of the popular classes

The student union, UGEB, was also among the organisations leading the civil rights struggles after the murder of journalist Norbert Zongo on 13 December 1998. Zongo, the founder and editor of the independent newspaper L’Indépendant, had conducted research on the death of David Ouédraogo, a driver for Blaise Compaoré’s brother, François. The journalist was found shot dead in his burned-out car. The government declared his death an accident. The next day thousands took to the streets and demanded an investigation into the circumstances surrounding the death and an end to impunity. André, together with trade union and human rights movement leaders, set up the Collectif d’Organisations Démocratiques de Masse et de Partis Politiques (Collective of the Democratic Mass Organisations and Political Parties, or ‘Collectif’) to gather the various protests together under one umbrella. On 1 December 1999, André, the Collectif’s president Halidou Ouédraogo, and the president of the trade union federation Confédération Générale du Travail du Burkina (CGT-B), Tolé Sagnon, were arrested after a protest march organised by the Collectif. On 3 December, they were accused by the judiciary of “incitement of military turmoil, incitement of civil disobedience, and endangering state security. The charges were finally dropped, and the accusation reduced to “sapping the morale of the troops.”

André consistently argued that the ‘popular classes’ – students, employees, small-scale farmers, self-employed informal workers, petty traders – share the same interests and should therefore unite in their struggles. “UGEB has always stated clearly […] that its militants must position themselves in the camp of the people”, André explained. “This builds the unity of the student struggles at the campus and the engagement in the activism after campus life.”

Based on these convictions, André was not only engaged in the student movement but also in human rights and labour movements. On 7 December 2000, together with fellow militants, he created the Organisation Démocratique de la Jeunesse du Burkina Faso (Democratic Mass Organisation of Burkinabè Youth, ODJ), a cross-class movement defending the democratic and social rights of and promoting solidarity among youth – where youth is understood as a social rather than an age category. “In the context of Burkina, which is essentially characterised by imperialist domination, and by the struggles of our people for social liberation”, André explained, “every youth, whatever his or her ethnic origin, philosophical or political conviction or religious beliefs, can be a member of ODJ.”

André never withdrew from his political engagement, neither when he completed his PhD or when he became a senior researcher at the Institut de Recherche en Sciences de la Santé (Institute of Health Sciences Research, IRSS), one of four state research institutes that form the Centre National de la Recherche Scientifique et Technologique (National Centre for Science and Technology Research, CNRST). He was president of ODJ until his death. As such, he played an important role in the struggles of the popular classes against the high cost of living resulting from the global food and fuel price crises in 2008; in the insurrection that finally overthrew Blaise Compaoré after 27 years in the presidency on 30-31 October 2014; in the popular resistance against the Presidential Guard’s coup d’état in September 2015; and in the mobilization related to the presidential elections of 29 November 2015. ODJ called for a boycott of these elections: “What do promises count for if we know that the candidates are those who have helped Blaise Compaoré to seize power and to keep it for 27 years?” André questioned in 2015. For him, to boycott the election was a claim of citizenship. Militants should rather organise themselves to struggle to achieve substantial change, rejecting “the illusions of putschists and electoralists.”

A life dedicated to struggles for social justice and equality

André’s biography resembles a chronology of recent social struggles in Burkina Faso. It was only from mid-2016 onwards that his illness obliged him to limit his political activities. His engaged life was impressively reflected by the many speakers at his funeral, with moving discourses by leaders of trade unions and human rights, women’s and student organisations. André passed away in a hospital in Tunis, where he had been transferred the week before. When his body arrived at the airport of Ouagadougou at 4 am on 29 May 2017, hundreds awaited him, silently lining the streets and accompanying the funeral car, on foot, through the city to the Maison de Peuple, the hall where the ceremony was held. Later in the morning, hundreds again were there to greet him at the municipal Gounghin cemetery in Ouagadougou, where Norbert Zongo is also buried, shouting “Pain et liberté pour le peuple” (Bread and liberty for the people). One of his comrades posted on a social network site: “Those who leave us are considered in French to be buried, in Africa, we say that they are hidden. […] We have not buried André; we have rather hidden him. His ideas, courage, engagement and dedication cannot be buried. André now sleeps the sleep of the just.”

Bettina Engels is political scientist at the Department of Political and Social Sciences at Freie Universität Berlin, Germany, www.land-conflicts.net.