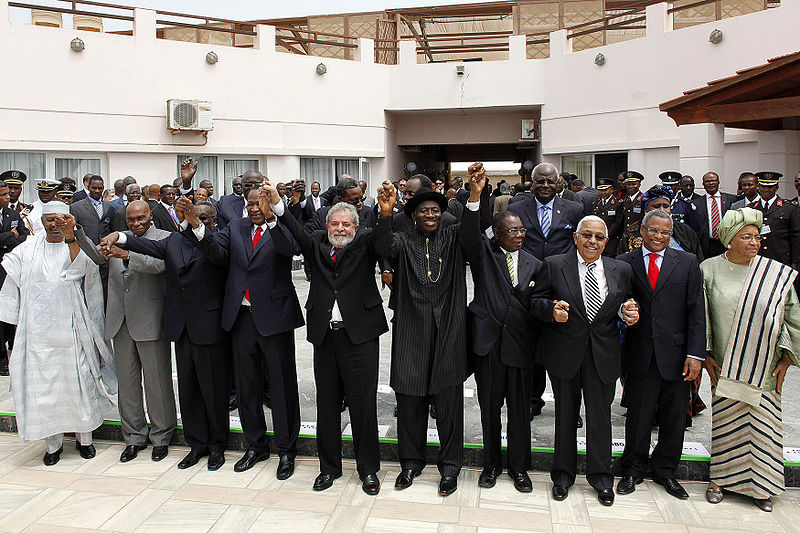 By Marco Mondaini and Colin Darch

Over the last few years, some Brazilian universities have been trying to do something about what Jonuel Gonçalves called in 2004 “Brazil’s laughable contribution to knowledge about Africa”. José Rivair Macedo has pointed to the need for Brazilians to tear away the “labels and stereotypes that obscure their perceptions” of the continent’s realities. But such attempts to begin to take African studies seriously in Brazil do not make sense unless they are understood in a much broader context, one that depends on a grasp of some key – and broadly progressive – foreign policy decisions taken by Brazilian administrations since 2003.

However, with the overthrow in mid-2016 by “constitutional” means of the democratically-elected government of President Dilma Rousseff, there is a serious possibility that these changes may be reversed. The present threat to Brazil’s relations with Africa is manifested in the shameless opportunism of the new right-wing administration of President Michel Temer.

What exactly is it that is under threat? A potentially fertile intellectual dialogue has only just begun between Brazilian researchers and their colleagues in African countries. It is unarguably the outcome, in academic terms, of strategic shifts in Brazil’s foreign policy since 2003. These shifts have created space for the development of research on Africa and the broadening of research perspectives on Africa from a very narrow base. They have also broken down the barriers constructed over years of uncritical Brazilian acceptance of the epistemological viewpoints of European and North American specialists, and their imposed definitions of what the objectives of African research should be.

This is not to say that work in such historic centres of African research as the Centre of Afro-Oriental Studies in Salvador (founded in 1959 at the Federal University of Bahia), or the Centre of Afro-Asian Studies in Rio de Janeiro (originally established at Itamaraty under the Jânio Quadros presidency and later moved to Cândido Mendes University) can be discounted. But such units do not normally have full-time staff; their researchers carry full teaching loads in undergraduate and postgraduate courses in the faculties and departments, and their productivity is constantly under pressure.

The history of Brazil’s policies and attitudes towards Africa is marked by quite dramatic shifts and tactical manoeuvres. But undoubtedly the most significant moments in this bumpy narrative have taken place quite recently, during the years between 2003 and 2010, under the administrations of President Luis Inácio Lula da Silva. The Lula government pursued a foreign policy oriented towards the countries of the global south, originating in the reality that Brazil is itself part of the southern hemisphere. This is the fundamental policy position that has permeated and defined recent attempts in Brazil to develop a new academic approach towards African countries. Until the early 1960s, Brazilian foreign policy was generally defined by the country’s linguistic and cultural subservience to Portugal; since most African countries were not yet independent, there was no diplomacy and almost no academic interest in them either. But the radically independent foreign policy of Presidents Jânio Quadros and his successor João Goulart between 1961 and 1964 marked the (short-lived) beginning of change.

This was abruptly halted for two decades after 1964, when Brazil was ruled by a brutal military dictatorship. Nevertheless, in the late 1970s, General Ernesto Geisel’s policy of “responsible pragmatism” moved African policy several important steps forward. Diplomatic recognition was extended to more African countries, and relations were strengthened – at least partly in an attempt to ameliorate the impact of the oil crisis of 1973. An important factor in this shift between 1973 and 1975 was the end of what Brazilians nicknamed the “Portuguese embarrassment” – the retrograde colonial wars in Angola, Guinea-Bissau and Mozambique.

Brazil moved quickly to recognise Angolan independence, within an hour of its proclamation – despite the Cold War, and while there was still fighting in Luanda. This was a milestone in the rapprochement with the former Portuguese colonies. Brazil happily accepted the legitimacy of Amílcar Cabral, Agostinho Neto and Samora Machel, and the Marxism of the liberation movements (the PAIGC, the MPLA and FRELIMO), demonstrating a significant weakening of the knee-jerk anti-communism that had earlier been the guiding foreign policy principle.

Although decolonization in Africa had influenced Brazilian post-war foreign policy, there were also serious constraints, even in the period of “independent foreign policy” between 1961 and 1964. The major domestic constraint was ongoing economic weakness, while the main external constraint was the aggressive anti-communism of the Cold War period.

In the event, the military coup of 1964 interrupted and silenced an emerging and culturally-determined discourse in Brazil’s approach to Africa. This only began to re-emerge under Geisel’s limited policy of “responsible pragmatism” in the 1970s. In April 1974, the Carnation Revolution in Portugal transformed relations with Lisbon, at exactly the same time as it became urgently necessary to find new markets for Brazilian exports and new sources of oil supply, in reaction to the 1973 crisis.

However, after the end of the “ditadura” in 1985, diplomatic relations between Brazil and African countries gradually cooled off.  The lowest point was undoubtedly during the conservative administrations of Fernando Henrique Cardoso from 1995 to 2002. This was partly attributable to economic downturns in the southern hemisphere, but just as important was the Fernando Henrique government’s subordinate orientation towards the powerful countries of the northern hemisphere. For Fernando Henrique, it was enough that Brazil’s role in Africa consist of participation in a few peace-keeping missions and some technical cooperation projects. Under Luiz Felipe Lampreia, foreign minister from 1995 to 2001, it was said that Brazil had more impact on African countries in the corridors of the United Nations, than through its own independent activity. Lampreia’s African policy contrasted sharply – and unfavourably – with that of his successor, Celso Amorim, who had first served as foreign minister in 1993-1995 (under Itamar Franco) and returned between 2003 and 2010 under Lula.

Signs of African economic recovery, the entry of Chinese and Indian capital into the African region, and the resumption of Brazilian economic growth in the early part of this century together created a situation in which broad-based relations between Brazil and African countries improved significantly. The underlying approach was global and strategic: indeed, under the Lula administration, South-South cooperation was the central plank in a policy that claimed a more assertive role for Brazil in the international community. The country began to exercise leadership in key global forums dealing with such issues as hunger and climate change, to participate pro-actively in peace missions, to criticise the policy positions of some world powers, and to support calls for reform in the structuring of global international relations.

Brazilian policy towards Africa during Lula’s two terms in office, depended essentially on four key figures. These were Lula himself; the foreign minister Celso Amorim, already mentioned; Samuel Pinheiro Guimarães Neto, who was secretary-general in the Ministry of Foreign Affairs (known as “Itamaraty”) between 2003 and 2009; and Marco Aurelio Garcia, a party functionary who acted as special advisor for international relations in the Presidency (he was sacked by Michel Temer a few weeks ago). Under these four, Brazilian international relations were guided by principles of international solidarity combined with a defence of Brazilian values and interests. This translated concretely into policies of what Amorim has called “non-indifference” and “humanism in foreign policy.” These changes under Amorim’s leadership – even though they were at least partly rhetorical – actually moved Brazil towards new alliances and a new international status.

Amorim sought to find ways in which the principle of defending the national interest could complement rather than contradict the principle of solidarity. Actually, successful examples of such complementarity are not hard to find – we cite the re-nationalization in 2006 of oil and gas resources in Bolivia by President Evo Morales; and the renegotiation of the treaty between Brazil and Paraguay governing the hydroelectric dam at Itaipu, in 2011.

Brazil’s new seriousness in its relations with African countries is demonstrated by a simple statistic. Fernando Henrique visited the continent only twice during his two terms. In his eight years in office, Lula visited African countries 33 times, and Celso Amorim 66 times. As we write, there are 37 Brazilian embassies in Africa; 19 of these were opened by the Lula government (the Temer administration is already moving to close some of them). Of course, this was not a policy driven entirely by altruism, or by a desire to solve local problems, despite Amorim’s oft-quoted maxim that “for every African problem there is a Brazilian solution.” The aim was also to expand Brazil’s diplomatic influence by supporting African political positions, and to facilitate the entry of large Brazilian companies into African markets in competition with their Chinese and Indian counterparts.

However cynically one regards the elements of commercial self-interest and, indeed, power politics in the formulation of Brazilian foreign policy, it remains broadly true that in the eight years of the Lula presidency, the emphasis on South-South cooperation in both Africa and Latin America had some beneficial results in Brazilian universities. Both CAPES (the federal agency for postgraduate education) and the CNPq (the national council for technological-scientific development) supported a range of measures. These included the granting of scholarships to African and Latin American students at both undergraduate and graduate levels in Brazil; a new programme, “CNPq ProÁfrica”, to fund research on Africa; and student interchanges with the universities of the Portuguese-speaking countries in Africa. Even more significant, two new universities were established. One, the Federal University of Luso-Afro-Brazilian Integration, known as UNILAB, is located in Redenção, in Ceará state, which was the first town in Brazil to free its slaves in 1883. The second is the Federal University of Latin American Integration (UNILA), in Foz do Iguaçu.

It is already clear, however, that the seizure of power – effectively a coup – by Michel Temer via the impeachment of President Dilma means a return to the discredited foreign policy of the pre-Lula period, in which Brazil accepted a subordinate role in the southern hemisphere in defence of US and European interests. With the imminent disappearance of a positive foreign policy oriented towards the global south, the future of African studies in Brazil appears very bleak indeed.