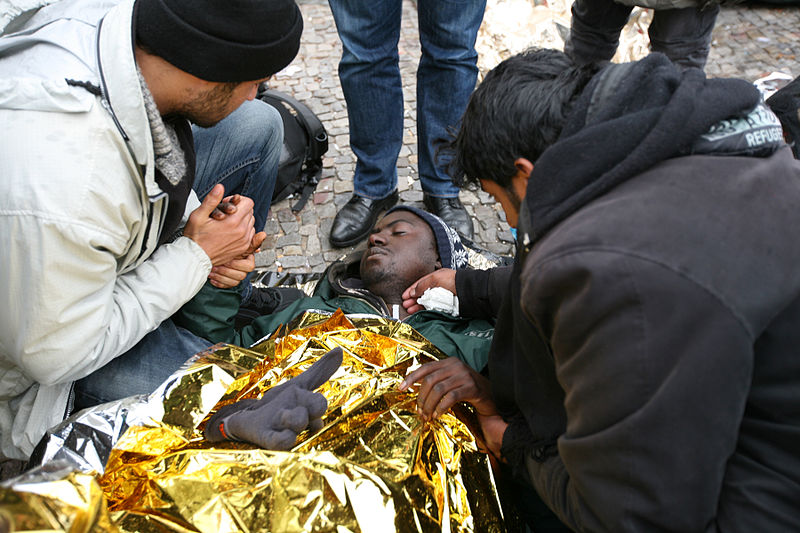 The question of migrants – of how many to allow, from where, and on what basis – continues to dominate political debate in Europe. However, Africans have temporarily been displaced in this debate by Syrians and Eastern Europeans as the main threat to Fortress Europe and as the prime harbinger of danger to the integrity of Europe’s coveted borders, its prosperity, the safety of its women, and its general future. Amidst this shift of focus, where do Africans in Europe stand in the current frenzy of hate and fear mongering?

To be clear, attempts at entering Fortress Europe from Africa have not decreased, and the regular deaths that accompany such attempts continue. For the past 8 years I have been researching the working and living conditions of African migrant workers in Germany, and their place in the public sphere and popular imaginary. The research that informs this blog is mainly concerned with African workers in Germany, many of whom are undocumented, work by day, and organize inside and outside of unions and work councils. I argue that the roots of the current migrant question  – military and financial imperialism – impoverish poor and working class people in Europe just as it does in Africa, the Middle East and other parts of the world. Using the case of Germany, the austerity economic arm-twisting that German political and economic elites exerts in Europe, especially on weaker (vassalized) European Union member states, creates an unsustainable economic and social arrangement inside Germany that is socially managed through a combination of zones of exclusion and the institutionalization of a wage race to the bottom, as a strategy for economic growth. The outcome is the further pauperization of the working poor and the denial of a space for civic engagement by migrants at a time of rising right-wing mobilization of mainstream German society.

My research provides a framework to plot the continuities and generalization of working class experience of work that were previously reserved for the periphery of global capitalism. I do this by reflecting on the Global South’s experience of a form of capitalist exploitation (now referred to as precarity) that has more recently become the feature of life in Western Europe. In keeping with the growing trend among the working class in Germany, many African workers in Germany work without contracts, the security of a predictable wage, protection against capricious employers or long-term security of any kind. Consequently, they exist outside of the state’s social capitalist arrangements, inhabiting an economic and social world which I designate ademocratic.

The ademocratic finds a formal breeding ground in the state’s delineation of people to whom and for whom it is not responsible, except in the negative sense of its duty to remove them from its borders. The relationship is transposed to the workplace or the very absence of one. Where a workplace exists, the ademocratic plays out at the level of workplace practices of legislated precarious work that ropes in those the state positively recognizes, but also those with whom it maintains a negative obligation. At the workplace, the ademocratic creates and acts through a set of bifurcated rules – one for the recognized and another for the unrecognized – both (rules) united in the prerogative of the employer to set work standards, wages, when to pay, if to pay at all, the amount of work, duration and the condition of termination.

Yau’Arme who lived in Italy for more than two decades before moving to Germany in search of better opportunities after losing his job to the financial crisis said, “The [German] government…has no assistance that it would give to you. They do not care; it is nothing to them. It does not worry them. So [even] if you go and form an organization to fight for your right I think it is very, very, difficult [to succeed].”

Accordingly, many African workers in Germany express a sense of estrangement from the society: they do not conceive of a future within German society although they live in it and are likely to continue doing so for a long time. Others insist on their social-membership-citizenship even where the law defines them otherwise. These contrasting visions dramatically played out at a function in Freiburg, a University town bordering France and Switzerland to the South of Germany on 6  March 2014. The occasion was Ghana’s 57th independence anniversary. The older generation, hovering above 65 years of age, lamented their outsider status and ended with the affirmation that their estrangement will soon end when they relocate back to Ghana. A small vocal group of mainly young men in their early 40’s insisted that the talk of going back to Ghana is at best an illusion. Germany belongs to them as much as it belongs to anyone else, as one respondent explained, “We keep saying we will go back and every year we are here; we are not going anywhere, we will die here and our children will bury us here. This is our country too!”

The living and working conditions of most of the attendees at the anniversary is fairly representative of working class Africans in Germany. The concept of precarity accounts for a great deal of the many sided vulnerabilities that neoliberalism unleashes on them and other workers in Germany: unsure of the next day’s job, decreasing pensions for the old, and stagnant wages relative to cost of living. But the geographical delimitation that constitutes it, and limited attention to the historical entanglements of capitalisms, renders the concept of precarity limited in understanding the social location of the African workers in Germany.

By inverting the practice of understanding African realities by analogy (with Europe’s historical experience), we find that casualized, unprotected, unorganized, hazardous and insecure work was, and remains, the standard form of working class life and capitalist accumulation in Africa. In the case of Africa, it is partly due to the mode of  incorporation of pre-capitalist forms of extra-economic forces that operated at the plantations, mines and other extractive sectors. Central to this historic precarity was a pool of reserve captive labour guaranteed by the absence of any meaningful employment. Helper and hand became the designation for these workers.

Drawing on prior attempts to understand the struggle of workers to become workers in the face of a regime of despotic labour arrangement that straddles customary and wage relations of domination, we can understand the unifying drive of generalized insecurity for marginal social groups under contemporary capitalism using the experience of the global south as a precursor. An entangled historical perspective requires foregrounding the centrality of experience in Africa as predicative of current developments in Europe. Here we have the proletarianization of previously unemployed African working class persons upon arrival in Germany and their absorption into a survivalist relation of production (and reproduction) – mediated by social and political exclusion.

The proletarianized Africans are pushed out of society by the incapacity of precarious work to socially incorporate them. The same is true within limits, for similarly located German workers. The routinely falsified assumption that low wages reduce unemployment and overtime leads to social redistribution creates fortresses that legitimize the ademocratic realm of super exploitative practices targeted at social layers engraved in survivalist forms of existence. This undermines the possibility of building a coalition of working people intent on forging a political community that is limited neither by origin, territoriality nor juridical citizenship.

What does all this mean for struggle and the creation of an alternative in a crisis-ridden Europe and beyond? How do African workers cope with the situation in Germany? An important building block in the construction of a new vision of sociality is dependent on the democratic incorporation of people who have been externalized to the realm of the ademocratic by production relations intrinsically tied to racial indignity in order to mystify class exploitation.

The centrality of cultural formations in creating a sense of commons is critical to the livelihood and social needs of African workers to survive the intolerable situations they are confronted with.  African owned shops, churches and mosques serve as social facilities for securing elusive jobs, advice on workers council’s legalization and informal social welfare schemes and loans, but also accommodation and food. This flies in the face of widely held assumption that these spaces foster exclusive communities.

The communities actually serve as spaces for debates and engagements on the social and economic direction of German society and beyond. They serve as important nodes in a project of inclusive deliberate democracy in all spheres of life. One respondent commented,

I joined [the African Muslim Association] because all that they speak about relates to progress…You listen to preaching that you can benefit from someday or that you can pass on to others, and as a human being you also need others, so you have to be involved with people. You know, when you think getting involved [with others] will bring problem; it will also bring peace.

Similar sentiments were expressed by another respondent,

It [national association] helps in the sense that we see each other. We go and chat and forget about the pains we face in this country. Because if you are among Germans it is difficult to even get something to laugh about. But if you go there, you meet people from your country, you laugh and you eat something from your country.

Equally important is that the basis of membership in these communities – religion or nationality – undercut ethnic identities that could potentially breed exclusive communities. What one sees in these communities is the creation of novel forms of belongings that speak to the contingency of identity and its mutability along lines of livelihood and political identities.

Germany and Europe at large is under a cloud of uncertainty. Right-wing and crypto fascist groups are an increasingly mainstream phenomena. On the 13 March this year the right-wing anti-immigrant Alternative Für Deutschland (Alternative for Germany) secured stunning electoral gains in state elections. In the Province of Saxony-Anhalt they secured 24% in the local elections.[1] Two weeks prior to this they had garnered 12% in Frankfurt, one of the most heterogeneous cities in Germany. The dangers are stark but so is the opportunity. These opportunities rest in the creation of a culture of political action and solidarity where working people find each other in struggle and in the process come to see how much they share in terms of aspirations and hopes.