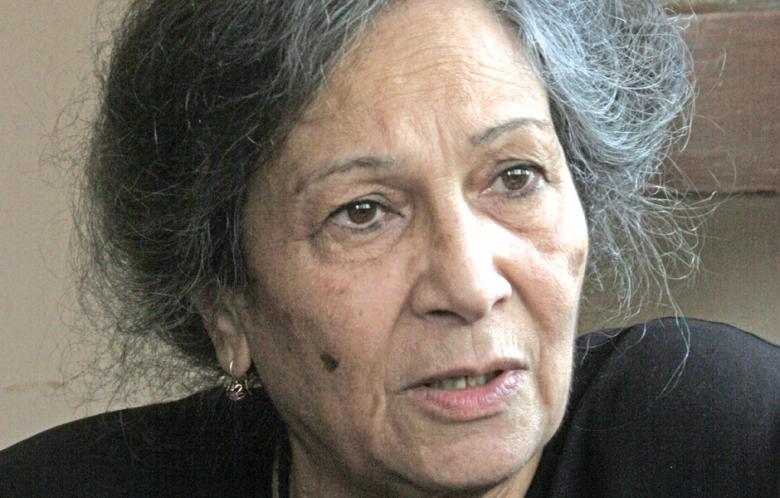 Shahenda Maklad (1938 – 2016), was an Egyptian activist, defending the rights of farmers and taking up many grassroots causes. She was the founder of the independent Peasants Union, and under her helm, Kamshish – a village located in the heart of the Nile Delta – became a symbol of struggle against oppression, and also a source of guidance and inspiration for other villages. On June 3, 2016, Maklad passed away after a battle with cancer.

Widowed at the age of 27 in 1966 Shahenda Maklad had been married to Salah Hussein, who was assassinated on 30 April by members of a feudalist family in Kamshish. An educated son of the village, Hussein had been engaged in leftist politics and in nationalist anti-colonial struggles before 1952. He later switched the focus of his activity to a family of landlords that had long subjected the village to a rule of terror and oppression. It was during this struggle that he was shot dead.

We republish an interview conducted by Yasmine Moataz and Reem Saad which first appeared in ROAPE in 2011.

So, tell us the story of Kamshish and its significance in the farmers’ struggle in Egypt. You could use 30 April 1966 as an entry point.

On 30 April 1966, martyr Salah Hussein was assassinated by the feudalists. His funeral was transformed into a demonstration that called for a trial against feudalists. In the following years, April 30th became a day of remembrance and commemoration, where Kamshish farmers and activists meet and discuss pertinent farmers’ issues in Egypt, as well as drafting an agenda for action.

Who is Salah Hussein?

Salah Hussein is my husband. We got married in 1957. He was the local leader for farmers’ struggle in Kamshish, and led them through various battles against feudalism. Kamshish is a village dating back to the times of the pharaohs, and you can find this in reference books. It has a land area of around 2000 feddans.

Historically, Kamshish had small land ownerships, and consisted of small and medium farmers’ households. It was relatively recently that Kamshish saw large ownerships and witnessed the emergence of feudalism. One of Kamshish’s men betrayed the ’Orabi Revolution in the late nineteenth century, which resulted in his moving from being a small farmer to a large landlord, seizing lands and forcing people to give their lands away, including members of his own family. And this was when farmers’ struggle and resistance started to emerge in Kamshish.

Together with his fellows, Salah Hussein decided to fight feudalism in Kamshish, with the belief that the first step towards the liberation of Palestine is to liberate Egypt and to get rid of feudalism first. Between 1951 and 1952, they made a plan of how to achieve their goal in Kamshish. Armed resistance was common at the time. So, the first step was to form an armed resistance group from the village, and for this, they needed to recruit people. Salah and his fellows started to carry out small tests, through which they could identify potential fellows for their resistance plan. The first thing they did was to ask school pupils to take off the hats that were imposed on them by the feudalist, and to pray by the side of, rather than behind, the feudalist. It was through these small acts of rebellion that Salah and his fellows were able to form a small group of activists, who were commonly called in the village ‘al-talaba’ or the students.

As the revolution took place in 1952, the idea of armed resistance became irrelevant; however, the political cause itself remained active.

Just before the passing of the 1952 agrarian reform law, Salah Hussein started using mosques, wedding ceremonies and funerals as occasions to call people to claim their rights, their land, to refuse obedience, and to end existing inequities and inequalities. New forms of passive resistance emerged. Kamshish farmers started to respond to Hussein by disobeying the feudalist; they refused to work as corvée labour, to which they had been subjected for a long time. This was followed by a series of small battles. One of the things they did, for example, was to sabotage a canal route dug by the feudalist in the middle of their lands to ensure that his land was well irrigated. The feudalists knew, so they shot at the farmers, injuring 17 of them, and of course, the canal route remained in the middle of the lands. After this event, the feudalist remained in power, and nothing has changed, so Kamshish people felt that the revolution did not help them in any way. Salah and his fellows knew that they had to introduce the taste of victory among Kamshish people. So they decided to break a dam built by the feudalist that ensured that his land was irrigated before the Kamshish farmers. They went armed and broke the dam, and when the feudalist came to check what was going on, they pointed the weapons at him, so he got scared and left. This incident stimulated resistance among Kamshish people.

To counter the farmers’ resistance, the feudalist recruited outlaws to threaten the farmers; they were armed and used to stand in the middle of the road to control Kamshish streets and to threaten its people.

One day, Kamshish people decided to get rid of the outlaws, so they left them shooting until they felt that they ran out of bullets, and then all the village attacked them, killing all four of them. That was in 1953. As a result, a curfew was imposed on the village, and Salah was banned from travelling outside Alexandria Governorate.

So Anwar El Sadat came to try to bring about a reconciliation between the Kamshish people and the al-Fekky family. At the time, he was a member of the Revolutionary Council. He made several attempts to reconcile both parties, but it did not work out. There was a split in the village between those who wanted reconciliation, and those who did not. Sadat went to the village, and met with Kamshish representatives and al-Fekky. He tried to talk to witnesses in Kamshish, but couldn’t find any, so he got upset and threw 25 farmers in prison, believing that this would get rid of a ‘deviant’ minority. He went to the house of Sheikh al-Balad [a local leader], and when Kamshish people knew that he was there, they held a demonstration, and burned the house where he was staying. So he realised that reconciliation had not been achieved.

A series of fights then began, all about land. The 1952 first agrarian reform law was not implemented in Kamshish because the feudalists managed to evade the expropriation of their land. Al-Fekki had seized people’s lands, however, on paper, the lands were registered under the name of small farmers, so that they could not claim for lands that, according to the papers, they already held. Only 50 feddans were distributed to the farmers. So we had to fight for the lands. In 1958 I ran for a seat in the local council, and I won. So I and other local leaders in the village became involved with the Committee to take the seized lands back. We did field visits to verify land ownership. This was a big fight; [the Al-Fekkis] were giving bribes and we were sending telegraphs to Gamal Abdel Nasser. This fight lasted from 1958 to 1962. So after the separation of Egypt and Syria, Nasser started to pay more attention to our cause. The lands were sequestrated, and then distributed to 199 beneficiaries. We followed our own rules in land distribution and not the Committee’s; we established a local committee whose members were knowledgeable about the real situation, like who actually worked on the land, who had six children and who did not, and so forth.

Then we started to discuss the issue of access to land and poverty. The question was: ‘Did we solve the problem of poverty by gaining accessing to the land?’ The answer was no. So we thought of developing the movement by investing in new crops, and it was then that the idea of establishing a cooperative began, meaning that we would cultivate the land together. People started to join the cooperative, and a developed political mobilisation movement emerged in the village. We wanted to transform the feudalists’ houses and lands into service centres for the village, and this was a step further in the movement. So [the Al-Fekkis] found no alternative but to kill Salah. They made several attempts, and eventually killed him on 30 April 1966. I often say that before Salah’s killing, our enemies were Kamshish feudalists, and after Salah’s killing, our enemies became all the feudalists who escaped the agrarian reform. That’s why the campaign against us was intensified later on. In 1967, many people were arrested, that’s why we didn’t commemorate the anniversary that year.

We did the first commemoration for Salah on 30 April 1968. Everybody came to Kamshish; Abdel Rahman al-Sharkawy, Loutfy al-Khouly, Zaky Mourad, Nabil al-Helaly, Youssef Hegab, al-Abnoudy, members of all social, intellectual and political forces in Egypt. The Kamshish cause started to attract media attention. It became a focal point for activists from all over Egypt. We used to hand-write the invitation, and send it from various post offices across governorates. We did not send all the invitations from one place for fear it would be easily tracked by the government.

I received numerous invitations to speak in different governorates, and the groups of Kamshish supporters became so numerous that the security officers wanted to remove me from Kamshish. The purpose of the commemoration was twofold – first to talk about problems that farmers face, and, second to solve these problems.

Read the full interview on the ROAPE page of the Taylor and Francis website.

Yasmine Moataz, a social anthropologist who recently completed her PhD at the University of Cambridge and Reem Saad is Associate Professor of anthropology at the American University in Cairo.