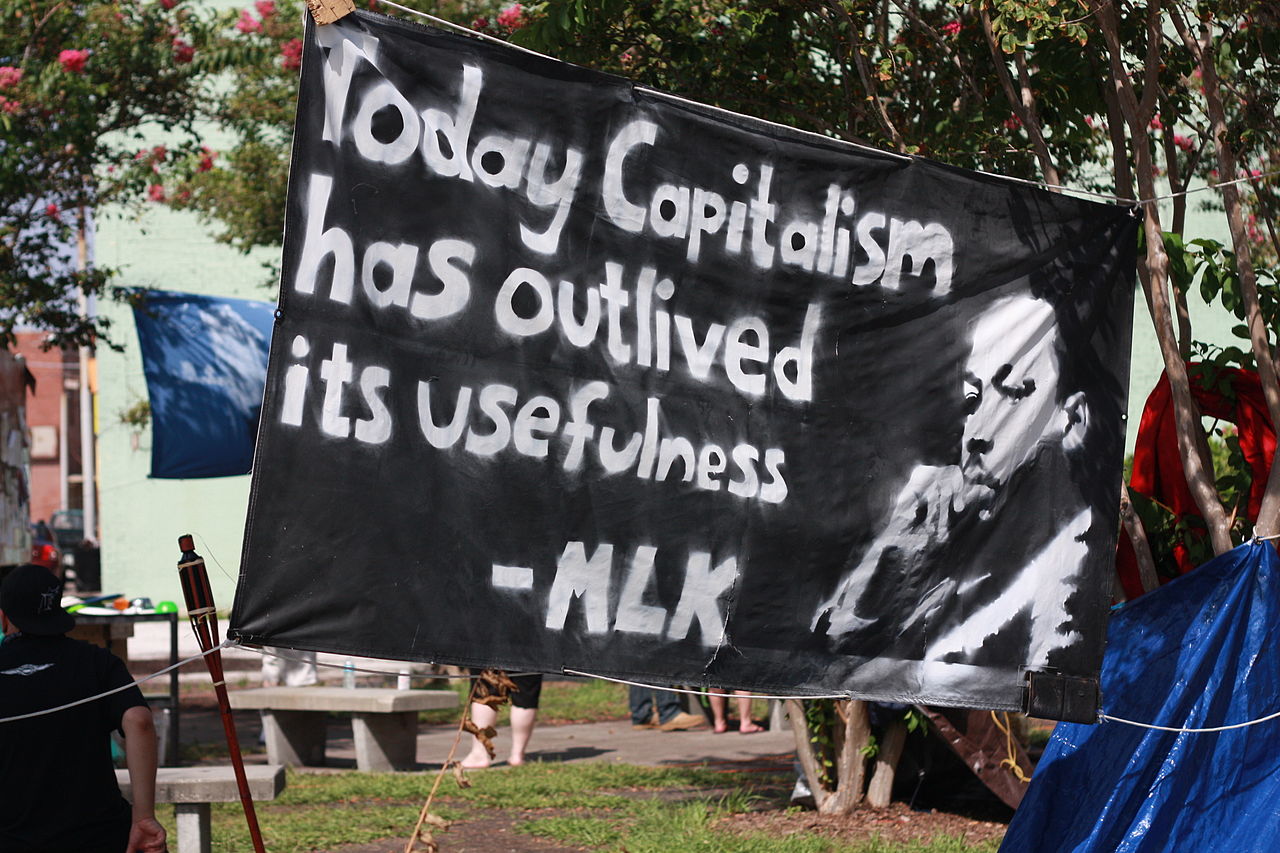 Mainstream understandings of capitalism share a faith that it can be stripped of its crisis tendency through the right policies, politics, and regulations. To sustain this faith, there is often a focus on moments when, it is claimed, everything was working well. There are three main candidates for capitalism’s belle époque: the late Nineteenth Century’s ‘golden years’; the post-Second World War social democracy; the post-Cold War ‘end of history’. Each of these serves as a basis to imagine how capitalism might become permanently stable and socially-just, generating questions like ‘what went wrong’ or ‘how can we retrieve a model or strategy from this period to address crisis now?’ But, placed in a longer history of capitalism, each of these decades of contentedness (no longer than that) was based on exceptional circumstances, not problems solved. Furthermore, unless one considers it valid to exclude the majority of the world’s population, none of these ‘never had it so good’ interludes was in any way universally ‘good’. Each happy portrait is framed by national, racialised and gendered exclusions so obvious that one can only understand the reminiscences for happier times as no less problematic than the occasionally-reported Russian nostalgia for Stalin or the grey-bearded Mozambican farmers I spoke to who said things were better when the Portuguese ruled.

Lamentations for a better time when capitalism worked are, then, both empirically shaky and selective, ways of dreaming that the system can be made to work for everyone and then wondering what’s going wrong. A more balanced and inclusive way of seeing capitalism’s history is that it is intrinsically crisis-prone and that any ‘righting’ of this tendency is a partial and momentary success, a lapse. Crisis is permanent.

This point is only sharpened if one telescopes towards our neoliberal age. Neoliberalism was born in crisis and has reproduced itself through repeated crises, localised in particular countries or expressed through different processes. Plummeting growth, currency crash, massive indebtedness, burst asset bubbles, exposed scandals of systemic corruption and theft in the midst of privatisation, sudden changes in global commodity prices… these are the devices of an insistent reallocation of property, wealth and power towards ruling elites, national and transnational.

The historiography of global capitalism is one of crises, strewn unevenly over territories, generating forms of precariousness, inequality and poverty. Crisis also generates piques of militarism, imperialism, and war. This creates a historiography of profound anxiety in which it is difficult to get a sense of progress that might reassure us in troubled times or more ambitiously provide legitimating narratives about capitalism as a way of life. What political story can we tell about global capitalism’s political forms since the late Eighteenth Century? Unless, again, we resort to speculative and idealistic forms of analysis, the most we can say is that capitalism has been intertwined with the attempted universalization of the modern sovereign nation-state and that this institutional set-up has afforded stability, security, and some legitimate authority for citizens in some countries for some of the time. We can also say that it has generated massive amounts of growth and productivity that have led to very uneven improvements in people’s material well-being and left many others no better off or worse off.

This is the most we can say without taking flight from the evidence, and even this is a stretch. Even allowing for intervals of stability requires heavy work of provincialism, the narration of capitalism in Europe as typical, as the ideal-type of capitalism, its ‘norm’. This was hardly the case in other parts of the world, least of all in Africa. One response to those who explain crisis in Africa as ‘too little’, the ‘wrong kind’, or an ‘incomplete’ capitalism, one is increasingly tempted to say: show me where it works properly?

In a sense Africa shows the world a future capitalism, one in which the social relations of production are far more extensively defined by contingency, violence, struggle, fraud, unfree labour, environmental pillage, and the politics of organised chaos. None of these features of social life are ‘African’; they are certainly capitalist and they are also global, albeit unevenly distributed in their intensity. It is a dark schadenfreude for those who study Africa’s generation of structural adjustment to find that many explanations for Africa’s ‘dysfunction’ are now right in the mainstream of analyses of mainstream globalisation: tax evasion, fraud, unfree labour, ‘underclasses’, falling risk or credit ratings, balance of payments crises, excessive debt.

Whilst post-colonial theorists continue to talk of Eurocentrism, capitalism Africanises the world, or certainly considerable parts of it. Dilapidated public services, the rise of ‘the precariat’, ghettoization and securitised wealth are the landscapes of the West as well. This ‘Africanisation’ works in a secondary fashion as well, commonly allocating suffering to those racialised as ‘black’, often underpinned by governments increasingly bold and vicious in their demonization of ‘race’.

If we telescope in again to think of the new millennium, then, we will likely be seized by a rather intense sense of anxiety: an age currently bookended by the war on terror and the global economic crisis. An age in which state sovereignty is no longer a working assumption of international politics. A world in which we live every day in the midst of a global climatic process whose effects are highly likely to be massive and irrevocable. We are locked into a global politics in which there is a relentless drive for growth above all else. Transnational corporations incrementally dominate politics both nationally and internationally.

This is not misanthropy or dystopian end-of-times stuff. It is simply a recognition of the broad features of our world. It makes more sense to characterise capitalism’s global history as something like a lurching from one crisis to another than it does to say we live in an age of liberal democracy, making poverty history, a new world order, green shoots of recovery, sustainable growth, or any of the ideological zeitgeists that bubble up (and often quickly down) from the media and many public intellectuals.

The entire burden of history suggests that you cannot fix capitalism’s crisis tendencies. And, it seems that the kinds of ideas and institutions that might ‘suture’ them or manage them in some fashion are difficult to identify. All states – in very varied ways – are in part globally-captured by transnational regulations and the influence of international companies. The discourses of governance are depleted of robust ideas of inclusive commonwealth and citizenship of the kind that led to the sliver of hope that capitalism could be managed by national government in other times. In the UK, we have a government that borders on the self-satirising, so deeply elitist, endeared to wealth, and contemptuous of poverty it has become.

Nevertheless, governments around the world readily recognise that there are crises. Their solutions generally revolve around a supine combination of the resourcing and light regulation of finance and investment, and populisms that easily slip into racism and xenophobia. Where unorthodox strategies emerge, they are besieged and often problematic in all sorts of ways as one can see in the ‘pink tide’ of some South American states. The emergence of ‘Corbynomics’ in the UK presents a radical departure from orthodox policy-making but in detail it looks like a strategy that would fit within many moderate Labour administrations of the past. At present, nothing in the world looks like a potential political adversary to capitalism.

Perhaps, then, an argument that is reasonably attuned to our times but deeply unsatisfactory in almost every other respect is that we should start to think about destruction. The political economy of capitalism and crisis is more likely to be broken than it is to be fixed, although it would be disingenuous to suppose that this makes the former likely or easy to imagine.

This is a scary prospect. For all of the obvious inequality, crazy combinations of overwork and unemployment, insecurity, state collapse, environmental disaster and so on, a great many people all over the world have some skin in the game. And, notions of economic growth offer powerful aesthetics of aspiration to millions more people. Capitalism has generated unprecedented processes of poverty reduction, although these are processes too eagerly celebrated and exaggerated. Capitalism is as resilient as it is unstable. It is not going anywhere fast and we have very little idea of what a world without it would look like. Perhaps capitalism’s demise and the kind of world that succeeds it might only be thinkable once the process of breaking it down is under way. Perverse as it seems, as long as there is crisis, there is hope.

Graham Harrison is Professor of Politics at the University of Sheffield and is on the editorial board of the Review of African Political Economy.