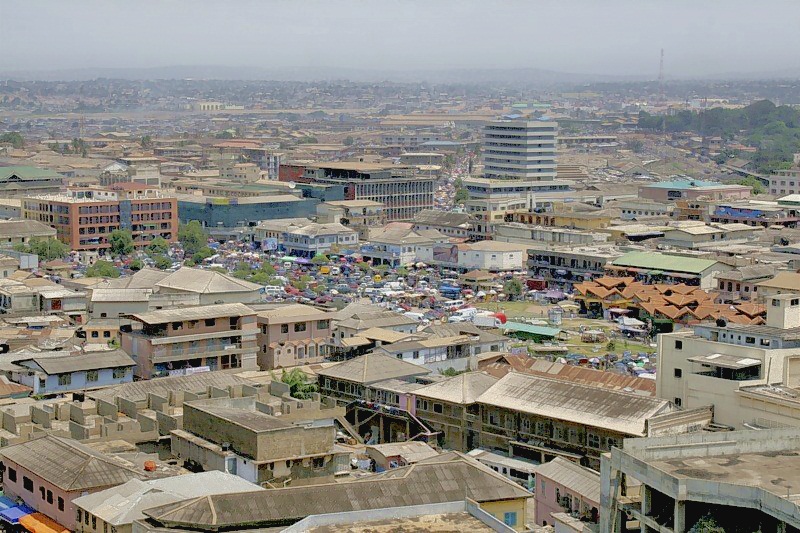 Over the last 20 years Ghana’s sustained GDP growth, reduction in poverty levels and progress in other areas of human development have seen the country classified as a ‘rising star’ of sub-Saharan African political economy – most recently in a report by the Overseas Development Institute published in 2015. The progress is impressive and orthodox analysis reflects this: GDP growth has averaged well over four per cent since 1992, with fluctuations of around nine and 14 per cent in 2008 and 2011 respectively according to the World Bank in 2016; poverty has reduced significantly, with Ghana meeting the Millennium Development Goal (MDG) target of halving extreme poverty by 2015 based on its own national poverty rates; it is one of the only non-OECD countries with a universal health insurance scheme; and net enrollment in primary education has substantially increased. These factors have also combined to create a burgeoning middle class and subsequently a highly visible consumer market, most prominently in the capital Accra. The African Development Bank in 2012 attributed the rising Ghanaian middle class as a causal factor in the increasing consumer market spending that was valued at US $15 billion in 2010, and that they predict to almost double by 2020. This isn’t a Ghanaian phenomenon, with most other sub-Saharan African countries that fit into the ‘Africa Rising’ narrative increasing their consumer markets not only due to economic growth and a booming middle class but growing populations, high urbanisation, increasingly attractive business environments, technological innovation and falling poverty levels.

However, what the emergence of the middle class, impressive growth/spending figures and reductions in poverty, hide is the rampant and discernible inequality that pervades Ghana. Although the country’s progress in poverty reduction has to be acknowledged, income inequality has significantly increased with the Gini coefficient – though flawed, it remains the most standard measure of income inequality – swelling from 0.35 to 0.42 since the Fourth Republic was established in 1992. This is an important factor in Ghana’s ‘rise’ as increasing inequality has the potential to undermine earlier progress, weaken social connections and substantially slowing further poverty reduction efforts. Most employment, for example, is found in the informal economy – 88 per cent according to the Ghana Living Standards Survey – with most workers earning below the GHC 8 (around US $2) a day or GHC 240 a month ($40) minimum wage, still dangerously close to the national poverty level of US $2 a day. There is no reliable unemployment data, with the dominance of the informal economy a contributing factor, so it is likely these figures could be worse. However, the lack of data could also be considered a determined move by governments to combat the anxiety that alarmingly high official unemployment rates would cause.

Regardless of official statistics, the consequences of high unemployment and informal work are most conspicuous in the capital Accra, as well as other metropolitan areas. Outside the offices of trans/multi-national corporation headquarters, businesses and coffee shops adults and young children work as street vendors, offering water, plantain chips and electrical devices etc. on busy streets, diving in between cars. Poverty is highly visible but again, this is not a Ghanaian, nor African phenomenon, but characteristic of many capitalist cities worldwide. Though today it is more prominent and, juxtaposed against  material wealth and conspicuous consumption that also dominates the metropolitan streets, it is a concerning dynamic.

The substantial wealth that has been created by Ghana’s abundant primary resources and economic diversification has not spread across the country, as the reduction in poverty levels would indicate. It has only reached a minority of people, with the youthful population particularly excluded through low wages and high unemployment and under-employment. Ghana’s Trade Union Congress has been similarly dissatisfied with the ruling National Democratic Congress (NDCs) insistence that GDP growth is equal to inclusive national development, when this growth has not contributed to any substantial employment creation. An example from the recent boom illustrates this. So although the productive structure of the economy has changed – in 2015 the service sector (50 per cent) contributed more to GDP than the previously dominate sectors of industry (28 per cent) and agriculture (19 per cent)  – employment growth is highly concentrated in urban areas which has led to further spatial inequality between regions.

With much of the growth that has been seen based on the commodity boom of recent years – with high prices of oil, gold and cocoa contributing most to GDP– the economy is highly susceptible to global shocks. With the bubble now bursting as world commodity prices plummet, current social and economic policies in Ghana are likely to exacerbate the current spatial and distributive inequalities that exist. Before my arrival in January, for example, large militant protests were organised against the recent utility price hikes and taxes, which have increased the cost of electricity by 59 per cent, water by 67 per cent and fuel by 28 per cent. The middle class may have the resources to somewhat buttress themselves from these increased living costs but the impact on the majority of the population – those in the informal economy, rural farmers, service sector workers on the minimum wage, and of course the unemployed – will be most pronounced. As Kofi Asamoah, the Secretary-General of the TUC has put it in 2014, “[the NDC is] pointing to our middle-income status when they know that we have come into middle income with all the characteristics of a lower – income country, paying the lowest wage rates with deteriorating social indicators.”

The reduction in social indicators – income, health, housing, education, employment and crime etc – highlights many of the repercussions of rising inequality as further pressures and conflicts are produced and reproduced within society. Recent research from the US explores these phenomena and suggests that higher degrees of economic insecurity and inequality, combined with increasing conspicuous consumption, can lead to higher rates of crime, including economic fraud and trickery; when wealth and assets are visible, flaunted and seemingly out of reach, those that are excluded may pursue other avenues to increase their own material well-being. Applying this to Accra’s highly visible consumer market and ensuing conspicuous consumption, it would seem this trend has also spread to the Global South. There is some evidence for such speculation. The 2009 Crime Victimisation Survey in Ghana, for example, indicated that a significant 47 per cent of respondents identified themselves as victims of consumer fraud, or cheated when buying something or requesting services in the course of seemingly legitimate business transactions – the highest prevalence in the survey. Interestingly, the latest recorded crime rate in Accra fell in 2014, however new forms of crime were actually found to have increased – predominantly those of consumer and economic fraud. This trend has not dissipated and at the time of writing there are cases of fraud covered in mainstream media outlets on a weekly basis. The most widely known is that of sim-box fraud, where incoming calls to the country from international destinations are channeled through fraudulent boxes at zero cost, bypassing state and service provider infrastructure. This is estimated to have lost the state and service providers US $919,296 and the government is increasing measures to combat and prosecute such crimes. Further research is required but it would seem that different forms of economic fraud are rising along with different forms of inequality in Ghana and that high levels of economic fraud, sub-standard goods and other practices may be linked to highly unequal societies. Unfortunately, the government’s approach to combating fraud is similar to that of addressing inequality, unemployment and poverty, namely deference to private sector interests and the preservation of profits over people.

Ghana’s status as a Middle Income Country is yet another orthodox indicator that distracts from the issues affecting the country. Rising inequality can already be seen to have undermined earlier progress, weakened social indicators and created new norms of ‘getting by’. If current trends continue then the decent employment, inclusive development of the informal sector, and the provision of high quality basic services that are needed (at the very basic level) to combat inequality will continue to be missed. These are all central issues that can be fostered by challenging free-market orthodoxy to improve the equitable distribution of opportunities and wealth. There are, of course, other complex factors that affect rising inequality: patronage networks still pervade the public and private sectors, democratic consolidation is improving but still highly susceptible to manipulation, and corruption still rears its head – both as a cause and symptom of inequality. With the general election scheduled for November 2016, however, there is an opportunity for these issues of inequality to be fundamentally addressed.