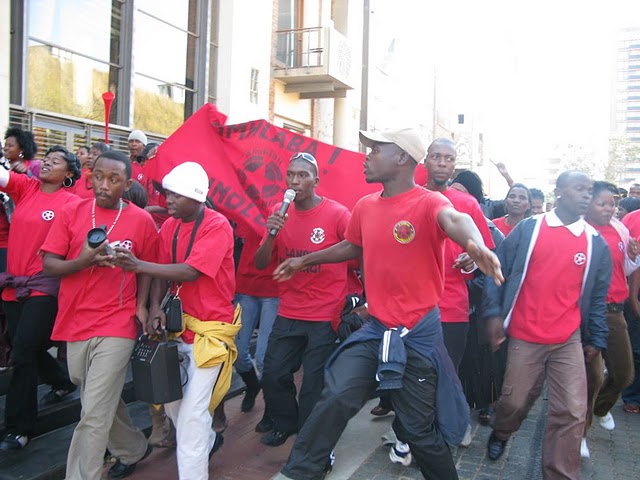 At the beginning of this decade (November, 2010) I was asked to come to South Africa to present a keynote address for a “Conference in Honour of Martin Legassick” that was to held at the Red Location in Port Elizabeth. It was, in fact, a great honour for me to be invited by the organizers to do so and I gladly accepted, just as I am honoured to have been asked by Leo Zeilig to write briefly of Martin here on the sad occasion of his recent passing.

But where to start a discussion of a career so rich and varied, albeit one which I both admired but was on many occasions in disagreement with? After all, he was a “Trotskyist” while I am a kind of free-lance, New Left Marxist. And he had become a left-wing, working-class-focused critic of the ANC as an activist first within the Marxist Worker’s Tendency and then the Democratic Socialist Movement; meanwhile, I remained – albeit as an anti-apartheid activist deeply skeptical about the ANC/SACP’s vanguardism and deep-seated Stalinism and, closer to (my) home, unsettled by its wrecker’s role within the Canadian liberation support movement – much slower to become as outspoken about the ANC and those many compromises it made with capital that had helped ease its ascendancy than I should have been.

In fact, as a friend of Martin’s, I began my Port Elizabeth talk in 2010 with a few more personal words related to such realities. For, as I then said, it would be impossible for me, then or now, to overestimate all that I have learned from Martin Legassick about both class struggle and South Africa – especially since the night, 30 or more years ago, when I met with him and several of his comrades in the dingy office of their “Marxist Worker’s Tendency of the ANC” in a dark and rain-swept corner of London’s East-End. I was there, at his invitation, to have Martin’s case and that of his colleagues explained to me in order that I might relay it accurately to anti-apartheid activists in Canada. I won’t say that I agreed with everything Martin told me then, nor would I agree with him on every issue today. But I agreed more often than not and, in addition, have always admired and respected Martin, his strength of character and his dedication both to principle and to struggle. I remember, in particular and in this respect, one revealing story from his last stormy days in the ANC. At some important meeting or other of the movement in London, years ago when he was under stern fire from the powers-that-be of the ANC, he approached another similarly beleaguered member of the organization in the lobby and said to him militantly: ‘X, we’ve got to stand up to them…this may be our last chance.’ The other person’s reply: ‘You stand up to them, Martin. I’m already on my knees.’ Rest assured: Martin was never on his knees to anybody!

A Joint Work in Progress

Of course, Martin Legassick’s principles have come across in all his actions and in all his writings, writings that focused on a wide-range of both historical and contemporary matters, and I will not attempt to summarize that impressive body of work here. Let me merely concentrate on his grand 2007 volume (725 pages!), the summa of a life fully and militantly lived and entitled Towards Socialist Democracy. In that volume he begins his Preface by setting out his chief premise clearly:

This book is a contribution to debate about the way forward, in South Africa and internationally, towards socialist democracy. By socialism I mean a society that serves the needs of the people, rather than profit for a capitalist minority. The world is ripe – over-ripe – for socialism, and indeed it is increasingly a necessary development for human survival. The idea of socialism comes to the fore whenever masses of people are in struggle – as in South Africa in the 1980s, or in Latin American early in the twenty-first century.

He then gives a tour d’horizon of the left’s twentieth century endeavours, again globally and also in South Africa, and concludes (on pages 575 and 576):

The establishment in South Africa of workers’ democracy with a nationalized and planned economy would terrify big business internationally. However, with the respect by the masses of the world for the victorious mass struggle against apartheid, and with the turn to the left in many sectors of the world the example of a workers’ democracy in South Africa would be enormously appealing, and, with today’s communications technology, would inspire the international working class even more rapidly than did the example of the Russian revolution.

If the working-class does not take power worldwide in the foreseeable future, the anarchy of capitalism threatens to create a level of global warming which would eliminate life on the planet. That’s the final dreadful alternative posed by capitalism. Working-class power worldwide, by contrast, would point the way towards a harmonious, socially owned democratic planned economy on an international scale, widening the way to a classless society of abundance.

Here I should repeat that I basically agree with great deal of the above – although the outcomes it invokes are far more easily spoken of than realized (as Martin would, I’m sure, be the first to agree). And this is true both of (a) the making of a meaningful break with capitalism and (b), as twentieth century’s grim experience has suggested to us, of any genuinely democratic rendering of the winning and the consolidating of such an outcome.

Moreover, the more we look at the South African setting, the more it, like most settings in the Global South, inevitably drags us away from the most pristine Marxist formulations regarding the nature and importance of the working class and plunges us, even more than elsewhere, into a messy world of additional distinctions and differentiation that have pertinent effects for the realities of struggle, for the realization of socialism, and, of importance to Martin too, for the realization of democracy. For there was more of relevance to societal struggles for social justice and equality than just the complexities internal to the “working class” per se – although how much more and just how to integrate that “more” into our analyses and our practice was something Martin and I may never have entirely agreed upon.

Indeed, I had raised some such matters in my talk in Port Elizabeth and that later, and far into the night over dinner, we further debated many nagging problems, problems precisely about both the scope and meaning of various central concepts in our various writings and of their political implications: “the working class,” “democracy” and “revolution” to go no further afield. But Martin was always a good person to have such differences of opinion with because you knew that he deeply cared about the questions being raised (and was also deeply versed in them), about the diverse outcomes and practices differing definitions pointed towards, and about the long-term future success of each and every struggle we were ever concerned with – and not least, of course, as they affected the very forging of a revolutionary project in present-day South Africa.

Back to Port Elizabeth

We know that communism [with a small “c”] is the right hypothesis. All those who abandon the hypothesis immediately resign themselves to the market economy, to parliamentary democracy – the form of state suited to capitalism – and to the “inevitable” and “natural” character of the most monstrous inequalities.

Capitalism as, in effect, “common-sense”: this Martin knew full well simply would not do, knew that that capitalism and the recolonization of South Africa by capital, as overseen by the ANC and the unholy alliance of white and black elites, could not add up into a real liberation. In short, it simply could not serve as a meaningful and humane “common-sense” either – could not, in Badiou’s words, serve as something “inevitable” or “natural.”  As I concluded my Port Elizabeth talk:

True, the elites of capital and the state are working hard to establish just such “commonsensical” and “natural” premises. Meanwhile, it is, quite obviously, to Martin Legassick’s enormous credit that he has kept the banner of real socialist common-sense, of class-struggle common-sense, aloft over and against the banner of capitalist “common-sense.”

In sum: thank you, Martin.