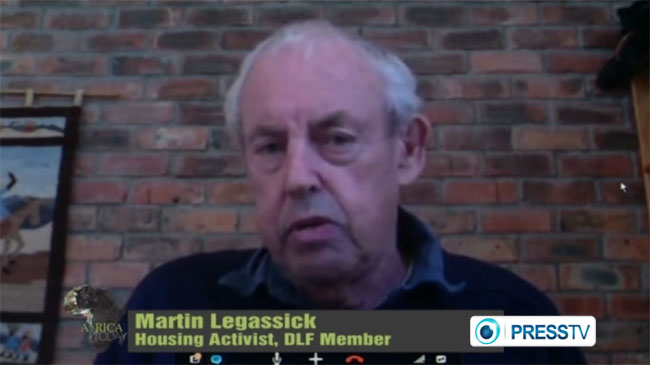 Martin Legassick (20 December 1940 – 1 March 2016) was a revolutionary socialist, brilliant researcher, teacher and mentor. He was an outstanding scholar and a pioneer of radical revisionist history in South Africa and a comrade and contributor to ROAPE. Here we post tributes to him and links to some of his work.

Comrade Martin Legassick passed away this morning, 1 March 2016, after a protracted and brave fight against cancer. Despite ill health and excruciating pain, he completed his final book project at the beginning of this year.

Comrade Martin was a revolutionary socialist, brilliant scholar, teacher and mentor. He was an outstanding scholar and a pioneer of radical revisionist history in South Africa. From the 1960s when he was a university student, Martin immersed himself in the struggle against apartheid, including mobilizing some of the first international student demonstrations in the United States. From the mid-1970s he became a founding member of the Marxist Workers’ Tendency of the ANC (MWT of the ANC) and left his academic post to work as full-time political activist. He served on the editorial committee of the journal, Inqaba yaBasebenzi, and newspaper, Congress Militant. For this, he was expelled by the ANC in 1985. On his return from exile, Martin continued to play a leading role in the MWT of the ANC and simultaneously became active in working class struggles in the Western Cape. When anti-eviction struggles exploded on the Cape Flats, he spent most of his time working with activists and contributing to build these new movements of the working class. Evenings and weekends were dedicated to meetings and political education classes. After the Marikana massacre, he immediately travelled to the platinum mines to show solidarity and to be part of the movement emerging there. Similarly, he stood by the farm workers under the leadership of CSAAWU. He lived for the struggles of the working class. From 2008 he also dedicated some time to efforts to rebuild the socialist left, especially in the form of the Democratic Left Front and was hopeful that the United Front and a new trade union movement would galvanise the working class in co-ordinated struggles against poverty, inequality and racism. When I met him on his birthday in December last year, he wanted to know about the new wave of students’ struggles and, despite physical weakness, was excited about the prospects of a new generation of activists emerging from this movement.

In 2006 Noor wrote an article based on notes of a talk he did for Martin’s retirement from the University of the Western Cape, the paper was published in the South African History Journal and is available here.

Noor Nieftagodien is South African Research Chair (SARChI) in Local Histories, Present Realities and Head of History Workshop at the School of Social Sciences, University of the Witwatersrand.

Martin was robust, forceful and utterly principled, apparently not caring if the distant margins of the political and academic worlds were his life’s home. Political relevance seemed important to Martin only if he looked across, horizontally, to his comrades, never vertically upwards to garner the bogus credibility that so many professional intellectuals seek. His anger was unforgettable, like a pure flame, and I was one to experience it – with various singes still in my memory – and yet I always knew it came from a good place. But he could also channel that energy, deploying his eloquence and likewise his demands on us all with sharp, short clarity, unmistakeable for its revolutionary political import. When facing leaders of the National Union of Mineworkers at an all-in labour-community conference of Amandla! magazine in late 2012, he was the only one amongst us who felt the urgency and courage to ask the necessary tough questions about Marikana, for example. Indeed, his personal fuel carried that strong odour of the arrogance that comes from fearless truth-telling, which he did as well as anyone I’ve ever met in South Africa. He lit veld-fires all over the intellectual landscape dating (quite remarkably) to 1964 in the New Left Review. His intellectual legacy provides the great historical sweeps, the micro-details so lovingly uncovered, and the thoughtful – never hackish – recourse to Marxist political-economic theory and historical materialist method. These are what I will always read from Martin’s dozens of major works, and what I will aspire to emulate. More power to his legacy: an exceptionally high standard of intellectual and political morality.

Although Martin Legassick was an academic and provided extraordinary articles, books and papers he remained a down-to-earth comrade who never wavered from the principles of socialism. He had his humorous moments as well as his grumpiness. He was prepared to explain things to new comrades and could also be blunt in criticism of comrades. Though Marin was always prepared to teach comrades and remained active until the last two years of his life. He was one a few Marxists who critiqued the Freedom Charter from a logical and reasoned perspective. I remember him in Cape Town speaking passionately on the housing shortage and crisis in South Africa and how communities were organising around the issue. He was always able to work with a variety of organisations and I noticed the enormous respect they had for him.

In 1972 Martin spoke at the famous seminar series started in 1969 at the Institute of Commonwealth Studies coordinated by Shula Marks. The Societies of Southern Africa seminar series, welcomed Martin’s original approach. His paper titled, The Frontier Tradition in South African Historiography is available here. In 1976 he co-authored with Harold Wolpe an article for ROAPE on The Bantustans and Capital Accumulation in South Africa which can be accessed here.  In 2007 he wrote Flaws in South Africa’s ‘first’ economy which was originally presented at the Centre for Civil Society Rosa Luxemburg Political Education Seminar at the University of KwaZulu-Natal in February 2006 and published in Africanus Journal of Development Studies.  He also wrote an astonishing paper that he was too ill to deliver at the 2015 World Association of Political Economy conference which ROAPE Online has published here.