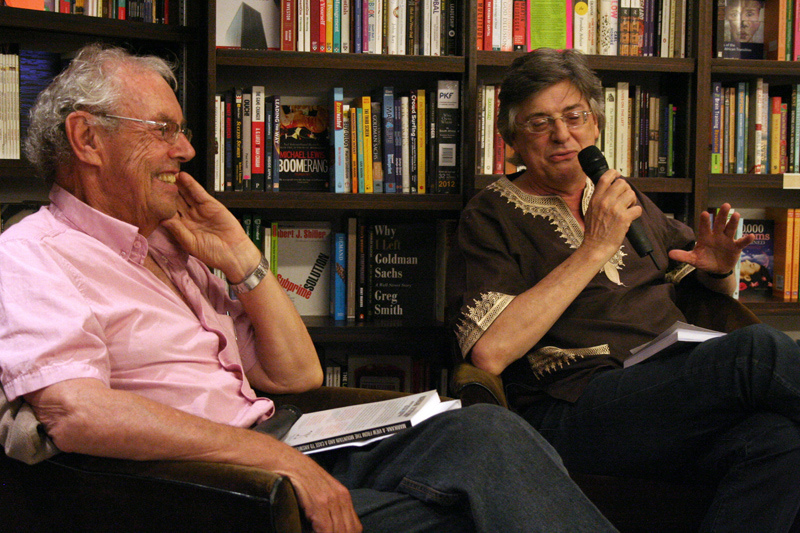 One of our great Marxist political economists, Martin Legassick, has died, after battling cancer so bravely the past couple of years. One of the best things to read, to understand and appreciate his contribution, are his remarks prepared for the closing plenary of the World Association of Political Economy forum on 21 June 2015 upon being awarded a Distinguished Achievement Award in Political Economy for the Twenty-First century.

Let me say, once again, I am honoured to receive this Distinguished Achievement Award for my book, Towards Socialist Democracy. At its launch at the Cape Town Book Fair in 2007 Patrick Bond asked why the book was so long! I replied, Patrick, you publish a book every year, but this is the product of 40 years activism, discussion and research!

Here obviously I can only advance a series of propositions from such a long book without substantiating them, though, eight years later, I have updated their emphasis in line with the concerns of this forum.

In the first place, capitalism is in crisis. It offers only prospects of increasing austerity, increasing inequality, and increasing unemployment — particularly for youth, who in despair turn to gang culture, drugs and crime and are in danger of becoming a destroyed generation. Together with that, with ecological disasters and global warming, capitalism has the potential for destroying life on this planet.

I am for democratic eco-socialism built from below.

The crisis affects every country, at this moment most acutely in Greece. All working people (I return to what this means) need to support the struggle of the Greek people because the course of events there will affect the ability of capitalism to impose greater austerity on the working classes of other countries.

At the same time, there is the frightening rise of xenophobia, religious fanaticism and terrorism – horrible dangers suffered mainly by women who lose their breadwinners — created in futile reaction to imperialist oppression and division of the working class, together with the present weakness of left leadership.

A major theme of my book was a critique of Stalinism the ideology of “Communist” Parties such as the SACP. I maintain that the term Stalinism does not just describe a repressive system but a world view defending the interests of ruling bureaucracies against the working class – with international repercussions which have set back the struggle of the working class for generations. Stalinism is not a variant of Marxism, but alien to Marxism

Like all humans, Marxists make mistakes. Marx did; Lenin did. So did Trotsky. Their uncritical followers do too. But one tragic legacy of Stalinism has been to bury the legacy of Trotsky’s ideas. Stalin hated Trotsky and had him murdered, as well as tens of thousands of his followers. But Trotsky had many correct ideas which advanced the theory of Marxism. His analysis of the degeneration of the Russian revolution, his analysis of fascism and critique of Stalinist’s then ultra-left approach – drawing on Lenin’s critique in the Comintern in 1920-1 of this tendency — were among the ideas which led Perry Anderson (not a Trotskyist) to write “The historical scale of Trotsky’s accomplishment is still difficult to realise today.” Trotsky’s innovative use of the concept of bonapartism in its proletarian variant characterizes the phenomenon of a totalitarian bureaucracy presiding over a (degenerate) workers’ state such as the Soviet Union was, and a number of other countries, including China – mostly if not entirely now reversed.

Regarding South Africa, my argument drew on Trotsky’s theory of permanent revolution – that national oppression would only be ended when capitalism is ended. It was a theory tested and proved in practice in the 1917 Russian revolution and proved negatively in the defeat of the revolution in China in the 1920s as a consequence of the rise of Stalinism.

The ANC claims, farcically, it is pursuing a ‘national democratic revolution’. But its policies are neo-liberal capitalist, serving the interests of mining and finance capital, entrenching South Africa as the most unequal society in the world, with horrendous poverty and unemployment. I heard at this meeting that there are 400 new coal mines in operation or being opened up (with the encouragement of government – despite its supposed commitment to the environment) – all dependent on cheap black labour and on the oppression of women as social reproducers.

The ANC’s policy of so-called black economic empowerment (the enrichment of a few blacks to join the white elite) cannot end racism or national oppression. The majority of blacks remain poor and tend to resent all whites as rich, while whites see poor blacks as threatening criminals. Racism and racial discrimination persists, and, with it, inter-racial violence (including a culture of internecine violence in the poor areas – in which women are subjugated). Only the replacement of the present state by a democratic workers’ state can begin to end all this – but then it could be ended rapidly.

Along with its bankrupt policies the ANC has become degenerate. With Zuma, (or even earlier, in the arms deal) corruption started at the top and has spread throughout.

Leaders of the SACP engage in poodle-like defence of every scandal of the ANC: Nkandla, El-Bashir, the Guptas etc – while the party masquerades as left! At this forum comrade Jeremy Cronin in his keynote address claimed the SACP had abandoned the two-stage theory – and was for building socialism now (within, of course, the framework of the ‘national democratic revolution’!) This while SACP leaders, including himself, sit in a government bankrupt in policy and reeking with scandal and corruption. Shame on all who remain in the SACP or under the influence of Stalinism!

In the same address Cronin spoke of “building socialism now” through advances in reindustrialization and advances of a non-commodified economy – by which he means the abolition of exchange-value (money) in favour of exchange of use values (for example, free public transport, free health, free education, free housing). Both aims are in my view futile if incremental and utopian to achieve against global capitalism. The real task for “building socialism now” is to build the forces capable of replacing the capitalist state with a democratic workers’ state which could then, together with international working class struggle, start to build socialism.

There are hopeful signs in the breakaways from the ANC-led triple alliance: the Economic Freedom Fighters, NUMSA’s United Front, AMCU replacing the NUM. They are signs – like the crises in the ANC Youth and Women’s leagues – of the beginnings of the disintegration of the ANC. SACP leader Blade Nzimande denounces these new movements as imperialist-inspired. This is typical Stalinism: link the so-called ‘ultra-left’ with the right while the party is in the ‘reasonable left.’ Hopefully building these new movements and eventually perhaps through their unity in action, they can constitute effective means for the working class to challenge for power, though presently all have weaknesses.

Who is the agency for change? The working class. Who are the working class? In the first place, all those separated from ownership of the means of production. Those actually working for bosses have the power to strike, up to unlimited political general strikes. But the working class includes not only those working for a boss but all the unemployed, whether of working age (young or old), pensioners or children. In particular women, who engage in social reproduction without a wage (as papers at this meeting have highlighted) as well as being among the most exploited workers (on the farms, as domestics, sex-workers) – have a strong interest in preserving the means of social reproduction. They are empowering themselves. Those women or men not actually at work also have potential power, to protest, demonstrate, block roads, etc as recent movements here and around the world have shown. In the present period together with all the poor hard-working peasants, the majority of the peasantry around the globe, have nothing to separate their interests from those of the working class and can join in protest to protect their interests and to build unity in struggle.

So I am an eco-feminist-democratic-socialist. I am indebted to Jacklyn Cock, a co-Award winner, an old friend of nearly 50 years, from whom I have recently learnt much on feminist theory and practice (I was first converted to feminism by Roxanne Dunbar, in the United States, in the 1960s). For my eco-emphasis in addition to Jacky, I am indebted to Vishmas Satgar, also a co-Award winner, and to Brian Ashley.

The majority of the middle class also have interests in socialism – but need to take their lead from the working class. The threat or the reality of costly indebtedness to the banks destroys their independence. In reality, they are also oppressed. The social movements are critical of NGOs who try to control them. The real critique that should be made is not of the middle class as such, but of middle-class political party leaders who posture as representatives of the middle class when they are really acting in the interests of capitalism.

In his keynote address Cronin advocates advancing the struggle by delinking from global capitalism. This, in my view, can bring for any country only temporary and partial relief and again, if incremental is futile and if full is utopian. The Freedom Charter is in fact the starting program for the struggle for power. The immediate task of a democratic workers state is nationalization of the banks, multi-nationals, and big monopolies under democratic workers’ control and management, and planning the economy democratically – moving rapidly to ensure that health, education, housing, transport, etc are free and open to all.

More than that, a fully non-commodified economy which Cronin advocates cannot be created in isolation – it requires the spread of workers’ democracy from country to country. How quickly this needs to occur is uncertain before degeneration would set in. But one example, even more than in Russia in 1917, could today inspire working people around the globe who are all suffering from cuts in living standards in a painful race to the bottom, from gross inequality, and with the threat of the eco-destruction of humanity hanging over them.

But the working class can win! For forty years I have believed this and continue to do so. Viva! Amandla!