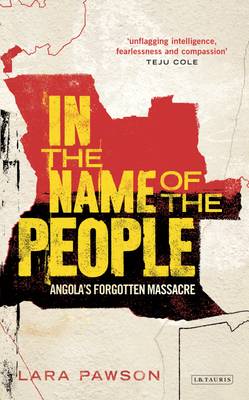 In the Name of the People is, first and foremost, a study of the massacre of 27 May 1977 that followed the revolt/coup led by Nito Alves against the ruling MPLA in Angola, in which thousands and possibly tens of thousands were killed. It is however at least two other things: a journalistic examination of the role of the British left in silencing contemporary discussion of these events; and a first-person narrative by the author of both her discovery of these events, and her own complicity in the wider romanticisation of an African/‘Third World’ path to socialism that accepted, tacitly or explicitly, widespread repression in the name of liberation. Whether Pawson’s particular blend of historical insight, political comment and personal journey works is probably itself a highly personal judgment. I found Pawson’s book to be, in equal parts, insightful, exasperating and captivating: whilst lacking the rigour of academic analysis, it is far more involving and better written than the vast majority of academic texts.

Although the publisher’s claim that the events of the 27 May are an ‘unwritten story’ are wide of the mark – the events are, as Pawson herself reveals, commonly discussed, if still controversial, in Angola, and fairly well established amongst southern African analysts – the book does bring into the Anglophone public domain the complex events leading up to, during and following the massacre in greater detail than before. Most significant is emphasis placed by interviewees on the division between the mostly black African rebels, led by Nito Alves, and the mestiço-dominated MPLA government, which not only showed little empathy with the unsurprisingly racialised perception of post-independence urban Angolans who saw their society still run by the very people they thought had been ousted following the Portuguese coup of 1974, but who were then accused of being ‘black racists’ for holding such views.

Pawson not only secures interviews with relatives of those who were killed or disappeared, but also with some significant protagonists. The most significant of these is Fernando Costa Andrade aka ‘Ndunduma’, whose inflammatory editorials in Jornal do Angola during the revolt are compared to the role of Radio Mille Collines in the Rwandan genocide. As well as revealing the thinking of both the MPLA regime in its murderous reprisal attacks against the rebels – themselves led by an faction of the MPLA – significant insight is provided regarding the timing of events, including those outside Luanda. Pawson, a former BBC Angola correspondent, is as committed as the average historian to the gathering of historical detail, whilst also being alive to the endless contradictions and ambiguities arising in the recalling of historical memory. Whilst she doesn’t say it as clearly and consistently as she might, the narratives regarding the events of 37 years ago that Pawson provides are evidently inseparable from current Angolan politics, something which makes the study doubly valuable.

Many of these insights could however have been narrated in a book half this length: the analysis of 27 May is interspersed with the narrative of Pawson’s own journey, both journalistic and personal. This includes more relevant material about the difficulties of getting a visa, or the perceptions of ordinary Angolans of the western researcher. Pawson provides plenty of local African detail bordering on the Kapuściński-esque, which is in turns enticing and gruesome. Pawson’s interviews in Britain are also presented in an extraordinary level of detail, which occasionally works – the dissonance of an interviewee describing her husband’s disappearance in a Debenhams café is particularly striking – but generally doesn’t. The relevance of Pawson’s descriptions of her own neighbourhood in east London, or the ‘yummy mummies’ of Belsize Park, comes across as dull or gauche. She also has an irritating habit of intruding on interviewees and even historical sources with her own immediate thoughts, rather than allowing them to speak for themselves.

Pawson is more successful in her efforts to hold the British left responsible for its silence over the events of 27 May. Her encounters with Victoria Brittain and Michael Wolfers, and their general refusal to engage with her critique, are both painful and mesmerising. Pawson engages in equally pained self-criticism for her own naivety regarding, for example, Cuba’s role in African liberation struggles (the book rightly depicts the almost neo-colonial role played by Cuba in Angola in the late 1970s and 1980s), and her willingness to discuss this naivety so openly may force many readers, including those sympathetic to ROAPE, to reflect on whether, in supporting African liberation movements over the past fifty years, we have ourselves overlooked or dismissed atrocities committed by liberation movements either during the struggle or thereafter.

Pawson’s ability to look beyond the personal is however undermined by her lack of serious engagement with wider literature. For example, she compares (p. 5) the silence regarding 27 May 1977 with the ‘well known’ events of the Gukurahundi in early 1980s Zimbabwe; she is apparently unaware of the long silence of western civil society and sympathetic states regarding the Matabeleland massacres, precisely because of their support of the new Mugabe regime. Pawson similarly makes good use of Fanon’s prescient warnings regarding the post-colonial African state, but seems not to have read, for example; Jeffrey Herbst or Crawford Young’s instructive analyses of the colonial legacy for those states; those, like John Saul, who have critiqued liberation movements from the left; or those who have argued, like Henning Melber and Roger Southall, that a particular type of authoritarian regime has emerged from Southern Africa’s liberation struggles. In the Name of the People has exactly 103 footnotes.

If the book has, from an academic perspective, serious weaknesses, then Pawson successfully avoids other pitfalls with alacrity. Despite her entirely justified sympathy with the victims of the massacre, she is alive to the contradictory and ambiguous narratives of their contemporary representatives, and does not attempt to impose a single explanation on these complex events. She is acutely aware that victory for the golpistas in 1977 carried no obvious prospects for a more radical or less repressive regime. Pawson, like most disillusioned left-radicals with an enduring and passionate engagement with African liberation, struggles to make sense of the detritus of her hopes: these incomplete struggles, both for southern Africa liberation and in Pawson’s heart, have instructive lessons for many of us.