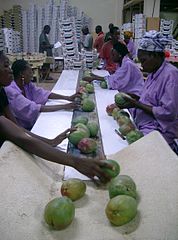 ‘Employment, Structural Transformation and Equitable Economic Development in Africa: towards an African trade union response to three decades of neo-liberalism in Africa’ was the title of a three-day consultative meeting held in Accra in July 2015 which unusually brought together trades unionists, civil society organisation activists and academic researchers from across the continent and beyond to frame a new agenda for the structural transformation of African economies. The meeting was jointly organised by Third World Network-Africa and the International Trades Union Confederation (Africa) in collaboration with ROAPE. Participants came from over 20 different African countries covering all the regions of the continent, from Trades Unions (TUs), universities, colleges, civil society and international organisations together with a smaller number of a similar group of people from outside Africa.

The meeting had two objectives. The first was to construct an alternative economic development policy story and the second was to put together an agenda for policy research and advocacy by both ITUC-Africa and the trade union movement on the continent. The scene was set with a number of presentations assessing Africa’s position in the world economy and the challenges faced in structural transformation. The present situation saw a continued dependency on a narrow range of primary product exports; foreign investment in raw material production that amplifies economic cycles; a financial liberalization that did not have the growth generating effects that were promised;  dependence on remittances as foreign aid has failed to materialise in the quantities promised and needed; African private wealth being invested outside the continent; the small share of manufacturing representing a failure of structural transformation, the worsening situation in the labour market and the declining role of the state under the various structural adjustment programmes. Of these, perhaps the most critical was the dismantling of the State and therefore its capacity to plan and direct development. The very concept of structural transformation was subjected to closer scrutiny, especially in the discussions.

Discussion of agriculture centred on the lack of effective support for small farmers, the bias towards large scale farming and increasing numbers of land grabs. The need for trade unions to be more involved in mobilising farmers and pressing for policies to support family farming was emphasised in the discussion. The importance of manufacturing locally the equipment needed to increase productivity on family farms was another highlighted issue. For manufacturing development the absence of an industrial capitalist class suggested a key role for a ‘developmental’ state, buttressed by an increasingly better educated labour force, especially in science and technology. Capturing more of the value chain in minerals and other raw materials, thus helping to create more employment, would give many more opportunities to a labour force currently dependent on few well paid jobs.

Macro-economic and financial policies were subjected to critical scrutiny. After decades of structural adjustment programmes, Africa is a net investor into developing countries, and the years of using only one tool, the exchange rate, to regulate the economy and generate investment and exports, have failed to effect any transformation and even failed on its own terms. A range of fiscal and monetary policies were required for each of the different objectives and in the discussion the role of trade unions in educating and campaigning for more relevant macro policies was emphasised.

Moving to social policy, the view was that this needed to move away from the colonial (and neo-colonial) paternalism of the ‘civilising mission’ to maintain people’s welfare towards the developmental state involving rapid economic development and the defeat of the trinity of ignorance, poverty and disease. To do this strong links needed to develop between economic and social policies in education, health and formal employment sometimes backed by legislation, social security laws for formal sector workers; and state pensions.

The meeting returned to look at the State in more detail and the role of the trade unions in helping to push for a developmental state, eliminate the abuses of state power and the personalization of trade unions as well as of the State. This was followed by a session on gender and class, both of which cropped up in many of the other sessions. The position of women not only in the household and labour market, but also in trade unions was fully covered in this session as was the issue of confronting patriarchy everywhere. Throughout the meeting there were calls for trades unions not only to mobilise employed workers but also those without work or in precarious work with gender mainstreamed rather than treated as a separate issue. In the final session, the meeting broke up into groups to cover five main subject areas: industrialisation strategy and industrial policy; agrarian policy; macroeconomic, finance and investment policy; employment, livelihoods and social policy; and trade unions, workers and political agency. A final plenary discussed the reports of each group.

This was a very worthwhile internationalist and progressive venture which ROAPE was happy to support. Bringing together academic activists and trades unionists was a particularly valuable feature of the meeting with each learning from the other. A full account of the presentations, group reports and discussions of both in plenary, can be found at under Articles and Third World Network has uploaded a large number of presentations and reports here.

Beyond Productivity: Reimagining Futures of Agriculture and Bioeconomy

The Debate – why economists get Africa (really) wrong