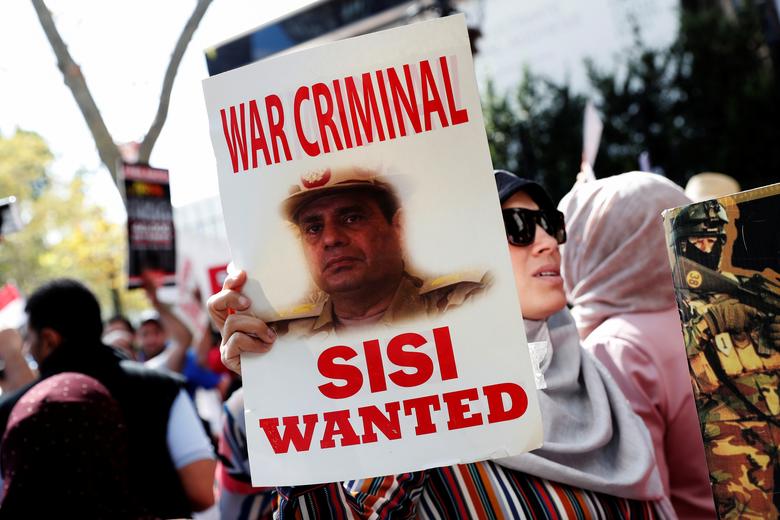 Introducing a collection of papers in ROAPE that explore the dimensions of land grabbing in North Africa, Elisa Greco and Ray Bush discuss Abdel Fattah el-Sisi’s bestial regime in Egypt, and land reforms in the country. They welcome a special issue that offers a class analysis of the processes of primitive accumulation and land dispossession in Egypt and Tunisia – now available to access for free until the end of August.

By Elisa Greco and Ray Bush

Thousands of mainly young Egyptians took to the streets of Cairo and Egypt’s provincial centres on 20 September 2019. They protested against the repressive regime of President Abdel Fattah el-Sisi and the corruption that is its hallmark. The protest was met with some surprise. Sisi’s repressive regime has clamped down on all dissent since it came to power following a military coup in 2013. Extensive and systematic torture of anyone deemed to oppose the government has become a feature of Egyptian politics and the regime has received support from among others, erstwhile UK Prime Minister Tony Blair, and ex International Monetary Fund (IMF) chief, now head of the European Central Bank, Christine Lagarde. The message seems clear from Washington and Europe: stability at all costs for the imperial triad irrespective, at least for the moment, of torturous treatment of Egyptians as long as law and (dis)order is maintained and there is no threat from Islamists or challenge to Israel. Continued US military support underpins Sisi’s bestial regime that draws on Egypt’s strategic rent to buttress repression. The heady days of the previous 30-year dictator Hosni Mubarak and his regime of a ‘democracy of newspapers’ where criticism could be voiced, as long as it did not involve the ‘royal’ Mubarak family, may now be lamented.

Street protest and demonstrations in autumn 2019 followed social media posting by a former construction engineer accusing Sisi and his close aides of corruption (El-Hamalawy 2019). The plethora of house building, hotels and palaces, at a time when the government stressed the country’s poverty and advanced IMF-backed austerity, jarred with the country’s youth. Young Egyptians not involved in the 2011 uprising and, it seems, unconnected to any political affiliation took to the streets with rage. They were greeted with repression. More than 4000 protesters and perceived sympathisers were arrested, including at least 111 children; places of protest, squares, avenues and corniches were militarised and the state used bribes to incentivise counter-demonstrations in support of dictatorship (Amnesty International 2019).

The blanket arrests were indiscriminate, including academics, lawyers and broadcasters who may even have worked for state-controlled media. At least 16 lawyers were arrested while seeking to defend their clients. The director of Adalah Center for Rights and Freedoms, Mohamed el-Baqer was arrested as he visited the Supreme State Security Prosecution to defend detained activist Alaa Abd El Fattah. He was charged with the same ‘offence’ as his client: ‘membership of a banned group’ and ‘spreading false information’. Perhaps one of the most unjust and certainly unlawful moves by the state has been the re-arresting of former prisoners.

The well-known activist from the 2011 uprisings Alaa Abd El Fattah was arrested on 29 September as he served probation in Dokki police station. He had already been imprisoned for a five-year term for peaceful protest in 2013 and part of his probation was to spend 12 hours a night at a police station for five years. He too was now accused of the infamous crime of spreading false news and being a member of a banned organisation, it seems while he was still incarcerated.  There is now a vigil at Tora Prison in Cairo to secure Alaa’s right to have communication with his family who are denied all access to him.  His mother Laila, and others have been beaten and brutalised by police and by thugs hired by the state to intimidate them to stop their peaceful protest.

One outcome of the September 2019 protests was that Sisi reinstated a food subsidy programme to 1.8 million Egyptians who had been removed from the food staples programme. Sisi’s direct intervention was revealed as an act of kindness to the poor – the benevolent dictator did indeed understand the poor’s impoverishment. It is more likely that his advisors remembered that a previous cut to bread subsidies in 1977 had led to deadly countrywide protests, and deaths in bread lines preceded the 2011 uprising against Hosni Mubarak (see Bush and Ayeb’s interview on their new book here).

What is less discussed is why Egypt needs a programme that subsidises goods to more than 60 million from a population of almost 100 million? Why are so many Egyptians poor and frankly have little chance of ever becoming less impoverished in an economic system that has become more unequal since 2013? There are many reasons for this, but two issues are significant.

The first is the consequence of the November 2016 three-year IMF agreement for a US $12 billion loan; the second is the way in which the military has further enriched itself as an institution of capital accumulation.

The IMF agreement, which did not include additional bilateral funding from China and Saudi Arabia, was a traditional and time-weary policy of reducing public expenditure, including subsidies, introducing VAT and liberalising the exchange rate (el-Badrawi and Corkery 2017). There were also swingeing cuts to worker rights and the introduction of draconian working practices and the destruction of meaningful trade union organisation. The inflationary impact has been enormous, costs of imports have mushroomed, and living standards have plummeted as unemployment expanded and repression increased. Early protest after the IMF loan was initially discussed in 2012 have been pushed aside as Sisi refused to consider any alternative platform of reform that could harness a large pool of labour to produce goods for local consumption by workers and peasants who could afford to buy them.

The role of the military in benefiting from Sisi’s compliance with the IMF and drawing on Egypt’s geostrategic rent is crucial in understanding repression and capital accumulation in an economy that has been structurally rooted in three main revenue streams from rent, not productive activities – rent from passages through the Suez canal; oil and gas; and foreign assistance (see Alexander and Bassiouny 2014). The historically important rent from labour migration remittances has long ceased to be a safety valve after imperialist interventions in Iraq and Libya destroyed, among other things, the regional labour market.

Although the Egyptian military is secretive, and parliament is never allowed to see its financial accounts, there is evidence that military-affiliated institutions have gained control of ‘previously state-administered enterprises’. The Egyptian military has extended and deepened its reach into areas of health, education and energy production, fish farming and restoration of historical sites. In agriculture the Ministry of Military Production has linked with ministries of planning, communication, agriculture and finance to manage and monitor farmer tenure cards and it has sold state land in, among other areas, Kafr al-Sheikh to investors creating a so-called investment hub.

‘Land, politics and dynamics of agrarian change and resistance in North Africa’

The recent uprising in Egypt is consistent with Christian Henderson’s argument that the inequality inherent to the corporate food regime in Egypt can feed the rebellion against the dominant class relations and that Egyptian small farmers and their demand for land and water access were crucial to the 2011 revolution. The issue hosts a Forum that explores the domestic dimensions of land grabbing in Northern Africa, offering a class analysis of processes of primitive accumulation and land dispossession in Egypt and Tunisia.  These themes are introduced in the Forum Editorial by Mathilde Fautras and Giulio Iocco who revisit the land question in North Africa – and especially in Egypt and the Maghreb – to contribute to bringing into dialogue two streams of critical research on land grabbing, carried out within the field of critical agrarian studies, and research on land in North Africa, by experts of the region – that have so far often proceeded separately from each other.

The forum explores the domestic dimensions of land grabs in North Africa, showing the heterogeneity of the domestic grabbers. The paper by Saker El Nour analyses ‘land grabbing from below’ by the squatters – members of the local elites, setting out the ongoing conflicts between different fractions of the elites and/or of capital. El Nour also raises the role of the Upper Egypt urban petty bourgeoisie collectively reclaiming land, and the involvement of rural local elites and medium farmers who have accumulated capital through Gulf work emigration. Their aim is to formalize individual property rather than developing agriculture, in order to gain social prestige or economic capital through selling the land after legalization. The main actors in contemporary struggles over land in Wadi al-Nukra are anything but small farmers. Their content thus has the cumulative effect of marginalising small farmers and local land users – even when some of these farmers are among the beneficiaries of land distribution projects.

Yasmine Moataz Ahmed explores the social life of grapes and wheat in a context where the Egyptian former Minister’s family has invested in large-scale commercial grape farming for export, by taking over the land of small-scale farmers. Ahmed’s article explores the social and symbolic dimensions of land grabs and offers a historical understanding of class formation in the Fayyum region, based on primitive accumulation, as tenants were evicted from the land to make way for domestic land grabs by Egyptian oligarchs.

Francesco De Lellis looks at domestic land grabbing in Egypt through the lens of farmers’ mobilisations in the aftermath of the Egyptian revolution, documenting forms of direct action by farmers – such as land occupations – and a drive towards unionisation, expressed through the emergence of a network of independent peasants’ unions.

The centrality of the land question to the national question and broadly to sovereignty is also at the centre of Marie Widengård’s article on how a land grab by a Chinese company was initially discussed by the Zambian government, to then be rejected after a change in government following the 2011 elections.