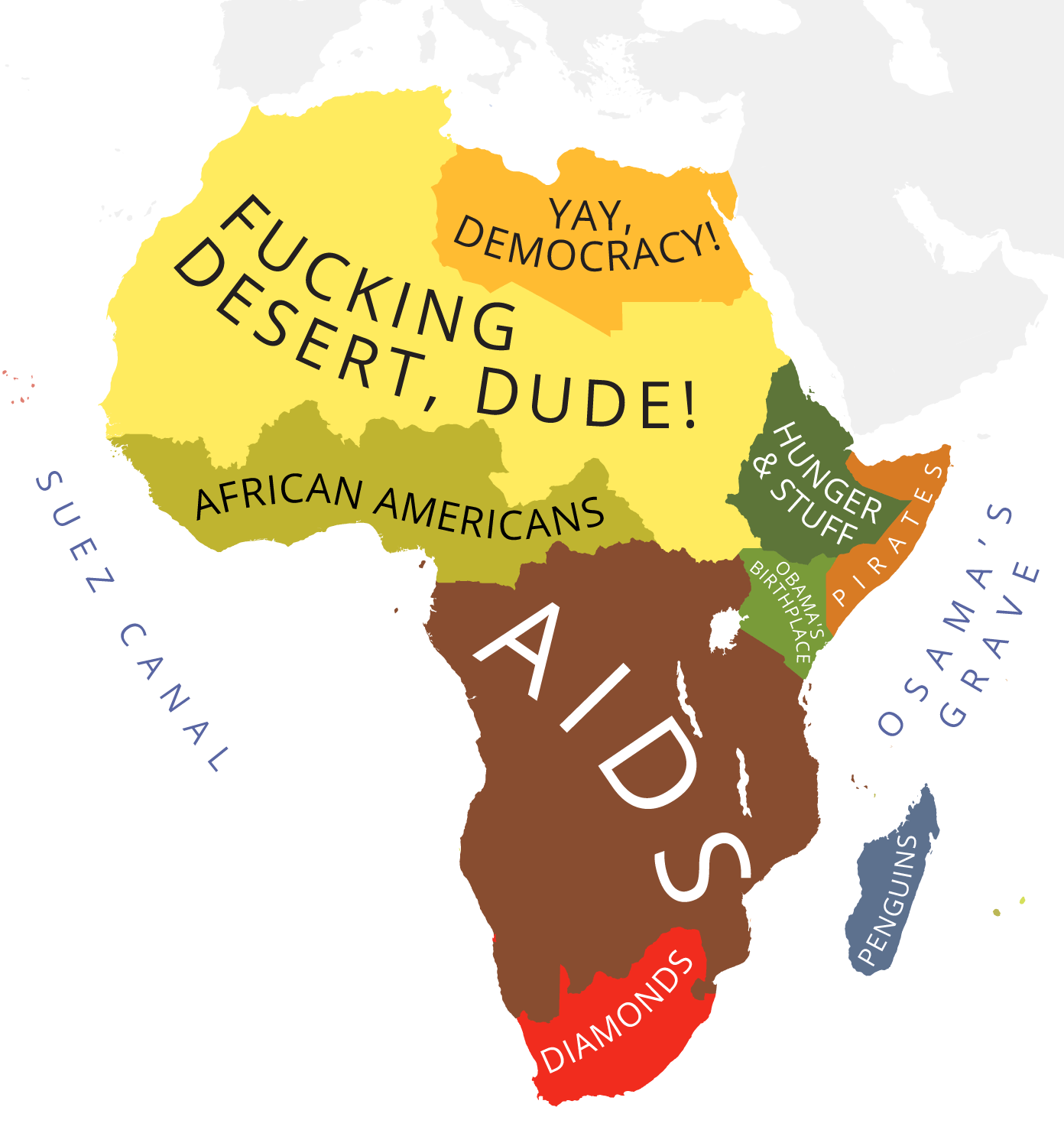 In a dispatch from their lockdown in Kigali, two UK-based researchers Andrea Filipi and Katrin Wittig reflect on the international media coverage of the Coronavirus pandemic and Africa. They argue that the coverage has recycled stereotypical portrayals of Africa, and that the West may be losing an opportunity to rethink itself and its relationship with the continent.

By Andrea Filipi and Katrin Wittig

Ladies and gentlemen, Africa is – once again – burning. ‘Chinese Virus: the catastrophic scenario of an infection in Africa’. ‘Africa meets pandemic with violence, confusion’ or ‘Coronavirus is an existential threat to Africa and her crowded slums’ are just a few of the headlines we’ve been reading in the international press over the past few months. The coronavirus pandemic has become the latest incarnation of the persistent discourse about the continent’s destiny to fail. And it does not quite matter who’s doing the talking, whether it’s the UN’s Secretary-General, the WHO Director-General, Bill Gates, international NGO giants or the countless media outlets that produce the headlines. Every crisis is an opportunity, it is said. But when it comes to our relationship with ‘Africa’, it seems that we the Westerners, the power holders, the global elite, who benefit from the current world system and are disproportionately sheltered from emergencies, are missing an opportunity to interrogate the way that we see ourselves and the rest of the world.

We are two female political scientists, both of us from Europe, who happened to find themselves in Rwanda during the unfolding of the coronavirus pandemic. We feel compelled to share our observations about the way in which ‘Africa’ is being talked and written about during this global turmoil. As researchers interested in the African Great Lakes region, part of our training has been about becoming aware of how the West has historically imposed on Africa, maybe more so than on any other continent, its own vision of what it is: the dark continent. We are always cautious when ‘Africa’ is essentialized and its more than 50 countries are treated as a unitary entity, more often than not equated with violence, confusion and chaos. This continued colonial imagery, which has concrete negative consequences for African people, has rightly led to a renewed call to decolonize knowledge production. Thus, we feel appalled that well into the twenty-first century, influential media outlets (such as The New York Times, The Guardian or L’Express) and opinion-makers have perpetuated certain clichés over recent weeks.

Since the news of the virus first started gaining the attention of the global media in late December last year, we have detected three more or less distinct phases with respect to how Africa makes its way into the debate. In the early days, what we call the first wave, the virus was largely confined to China and other parts of Asia. Not a lot of outlets talked about it reaching Europe yet, or certainly not into the full-blown, unprecedented extent that we are seeing today. Following initial condemnations of the Chinese government’s secrecy, it was subsequently largely praised for stepping up to the plate and putting its authoritarian toolkit to good use to ensure control and compliance with restrictive measures. This, combined with the highly developed infrastructure and surveillance techniques of places like Singapore, South Korea and Hong Kong, was largely credited with keeping the epidemic at bay. The dominant narrative was that the world would be fine as long as the virus remained in those countries that were deemed to have the capacity to act effectively. Read: Not Africa. This is how Africa entered the media discourse about the virus, as the ‘catastrophic scenario’, mostly framed around the ‘massive challenge’ it constituted for the world community. Africa would threaten global containment precisely due to the infamous lack of effectiveness and infrastructure of the African state.

To be clear: we do not mean to argue here that the infrastructure (paved roads, hospitals, schools, and other attributes of contemporary states) of most African states is not overall inferior to that of many European or Asian countries, or that countries of the African continent are not, on average, poorer than those on other continents of this world. But it is striking that, even at a time when Africa was not yet hit by the epidemic, it was primarily Africa that was presented as the ‘most vulnerable target’. Africa was instantly contrasted with the efficiency of Asia (a stereotypical discourse in its own right), and once again framed as inferior and lacking. As Bill Gates told the American Association for the Advancement of Science in mid-February, ‘This disease, if it’s in Africa, is more dramatic than if it’s in China.’

This essentializing discourse, problematic in itself, also seems to point the finger exclusively at African governments, without even an acknowledgment of the structural context which gave rise to, and perpetuates, these same governments’ weaknesses. We are referring, of course, to the way in which the continent is incorporated into the world hierarchy, which began with its colonial conquest and continues to this day. Sociologist Hèla Yousfi discusses this in her timely article in Libération. Before the virus reached Europe, we did not detect any global concern about Europe’s capability to handle the crisis; if anything, the expectation would have been that Europe’s ‘advanced systems’ would move swiftly and efficiently to contain the virus. An Al Jazeera article at the end of January exclaimed that ‘Europe’s health infrastructure is well prepared to fight the spread.’ And yet several countries in Europe mishandled the crisis, certainly at its outset.

When the virus did spread to Europe, a second wave of discourse about the pandemic began, with references to Africa beginning to appear more frequently in the global media. For that brief period between late February and early March, there was astonishment at how it was that the virus was threatening Europe, not Africa. How could a global catastrophe be avoiding the very continent known for catastrophes? This is when the hypotheses about Africa being protected by its warm climate, and by its age pyramid, enjoyed prominence. Be that as it may, our point here is that the discourse illustrates the underlying need to explain why Africa has been spared at that point, and to do so through some of its trope attributes: heat and youth bulges.

The third wave represents the current discourse. Now that the virus has reached African countries, yet so far with relatively few confirmed cases, the chorus has it that it is nevertheless only a matter of time before the apocalypse hits the continent. This is where the language of African states’ fragility truly takes centre-stage. In one illustrative example, a UK media outlet wrote at the end of March that ‘Africa’s fragile health systems need to prepare for the worst’. A leaked memo from the French Ministry of Foreign Affairs, which went viral on social media, painted a picture of the coronavirus as the ultimate crisis that will bring down governments in Africa, going as far as making recommendations for how the French government ought to prepare for the aftermath. The Economist also chimed in with what its Africa editor called ‘a big take’ on how ‘Africa is woefully ill-equipped to cope with covid-19’ (The remainder of the editor’s tweet is also worth sharing here, just to cheer you up): 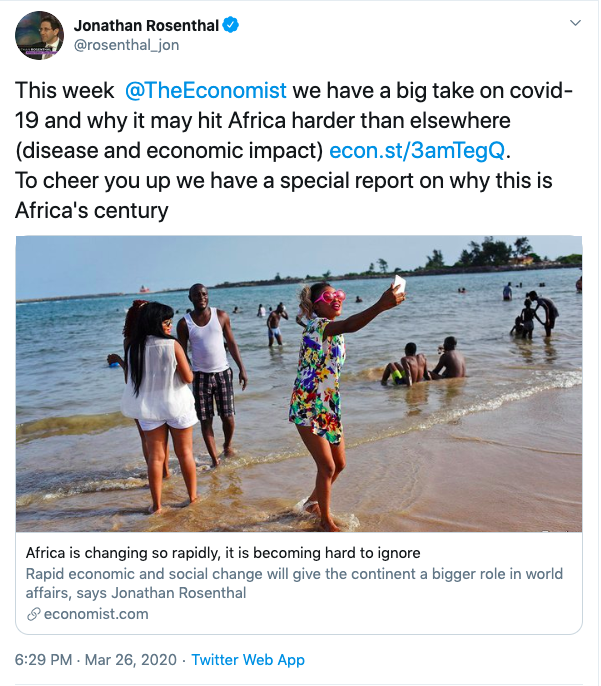 To be fair, some outlets do distinguish among countries, having praised for example Senegal or South Africa for world-class testing methods, and even the aforementioned French memo recognizes that not all governments in Africa are alike. Still, the overwhelming majority of media articles report on Africa in unitary terms and spread anxiety about a coming apocalypse. Given that the virus seems to have reached the African continent only after hitting Asia, Europe and North America, many African governments took early measures to prevent transmission – quite unlike the US or the UK, for example. This might, in an optimistic scenario, translate into a non-apocalyptic outbreak of the pandemic. Of course, this does not mean that the restrictive measures taken in African countries and globally haven’t already had a profound negative impact on peoples’ lives, including through large-scale loss of livelihoods as well as human rights violations. As elsewhere, there is likely to be a variation among countries and communities in terms of the overall impact of the crisis.

Some final reflections before we close. The cure to prevent this expected implosion of ‘Africa’ is once again to be found in money from the West. ‘Africa won’t beat coronavirus on its own. The west must dig deep before it’s too late’, cried The Guardian, recycling many of the clichés discussed above. The same article also quoted Kevin Watkins, the chief executive of Save the Children, as saying: ‘The NHS, just about coping with Covid-19, has 7,000 critical care beds; the average low-income country in sub-Saharan Africa has 50.’ This is a factual comment on the sub-Saharan health care system, which would profoundly complicate the individual states’ ability to cope with the disease, should it reach proportions comparable to those currently seen in North America and Europe. While this comment will likely be read by most readers as a critique of the African state, isn’t it equally a loud condemnation of the humanitarian and development industrial complex, which has ostensibly poured billions of dollars in aid to the continent? What have all the ‘Save the Childrens’ of this world been doing ‘in Africa’ over the past sixty years if not building critical care infrastructure, as one of the top priorities for any country?

It is worthwhile to note that this aid is framed largely as charity, rather than as solidarity. The difference is crucial here: charity implies a power imbalance between the donor (‘savior’) and the recipient (‘helpless victim’) and flows from the rich to the poor, from the strong to the weak, from the top to the bottom. Without saying so explicitly, it calls for ‘the world to save Africa’, thereby implicitly reaffirming Africa’s place as a repository of the poor, the weak, and those at the bottom. Solidarity, on the other hand, starts from a position of partnership, of recognizing the other as an equal, and constitutes a collaboration from which all benefit, albeit in different ways. With the UN Secretary-General busy establishing a new fund to fight COVID-19 in the ‘vulnerable countries of the Global South’ and the African Union appointing special envoys to solicit donor funding, isn’t it time to ask the difficult questions about whether these same mechanisms have historically contributed to solving the problems ‘of the Global South’, or if they have helped to perpetuate them?

We found the lack of solidarity-based language in the media all the more puzzling in a context where the coronavirus epidemic has amply demonstrated the fragile, if not failing, nature of healthcare systems in many ‘rich’ countries. On that note, perhaps it is not just African countries that might apply lessons learned from recent ebola outbreaks in some parts of the continent, as some outlets have suggested; maybe the world outside of Africa could also heed some lessons from African countries for once? Or, maybe we should all commit to stop talking about ‘Africa’ once and for all. Present company included.

Andrea Filipi is a PhD candidate and Katrin Wittig is a Marie Sklodowska-Curie post-doctoral researcher in the Department of Politics and International Studies at the University of Cambridge. Andrea researches the politics of protest, while Katrin focuses on the trajectories of rebel groups in war and peace. Their primary regional interest lies in the Great Lakes of Africa.