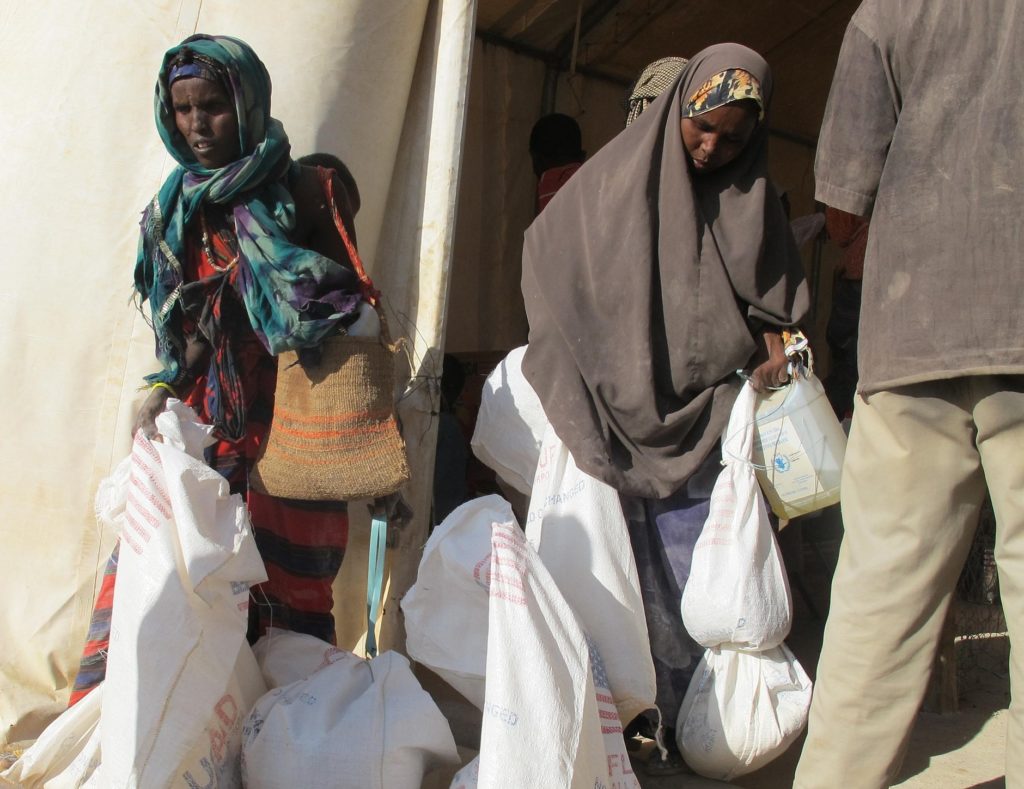 Kenya hosts about half a million refugees in its camps and urban areas. Increasingly, these camps are also sites of finance, debt, and neoliberal-led forms of experimentation. Ali Bhagat situates refugees as a new population for neoliberal experimentation as camps are transformed into spaces of untapped profit.

Refugee survival in Kenya is inseparable from the dynamics of inequality, finance, and debt embedded in capitalism. This blogpost draws much inspiration from Kevin Sieff’s excellent article in the The Washington Post that looks at how debt-ridden refugees are being forced to return to a warzone in Somalia. I am most interested in the ways that capital – in its money form – supersedes, intervenes, and invades the humanitarian sector. At the site of the refugee camp and in cities like Nairobi, capital claims to free the refugee from the passivity of shelter and assistance through entrepreneurialism. This post explores neoliberal experimentation in the context of refugee survival in Kenya. I argue that refugees represent an experimental population. Their various sites of survival are opened up to financial penetration – a last ditch and piecemeal market-led solution to alleviate poverty.

Kenya hosts approximately half a million refugees in its camps and urban areas and has done this for nearly three decades. Dadaab and Kakuma, two of the world’s largest refugee camps, have become sites of increased xenophobia and structural violence where the Kenyan government continues to threaten their closure in the face of diminished global aid. Contrastingly, these camps are also sites of finance, debt, and neoliberal-led forms of experimentation. Neoliberalism – ideological and material power of private interest through the dismantling of state-led solutions for welfare – is highlighted here as a way to understand a global stance and policy focus on self-reliance. In so doing, I situate refugees as a new population for experimentation. Experimentation is a market-oriented solution to alleviate refugee poverty. It is hinged on self-reliance and propagates the financial interests of the private sector. The intentions of capital accumulation are hidden under the guise of choice and liberty where refugees can use credit to escape poverty and transform themselves into entrepreneurs. Self-reliance is a façade.

Mastercard and the U.S Agency for International Development (USAID) announced a public-private coalition to transform refugee settlements into digital communities in 2018. This strategy seeks to ‘bring together technology, solutions, and experience from multiple sectors to transform refugee settlements into digitally-connected communities’ thereby, providing infrastructure-based innovations in terms of mobile phone and internet access vis-à-vis key dimensions of survival such as safety, food, shelter, and water.

Mastercard along with Western Union announced a new digital infrastructure model hinged on mobile money, digital vouchers, and card-based solutions that promote refugee ‘self-reliance’. Digitizing the refugee camp thereby transforming it from an arena of passive aid and shelter to a marketplace allows refugees to access formal financial services. This form of neoliberal experimentation also transforms the camp, previously understood in the logic of the development industry as a forgotten barren space, into one of untapped profit.

For example, as the Mastercard and Western Union report states, ‘…refugees are responsible for payment…For example, children can go to school, but the family must pay for uniforms and books. It becomes vital to access convenient, easy-to-use financial services. Foreign and domestic remittances received via Western Union or hawalas [a remittance channel that takes place outside of the banking system] are a major source of income.’ Interestingly, the logic of empowerment described in this report, is equated to providing a wider array of financial service access – not actually addressing the fact that refugees have to pay for some essential survival services such as healthcare and basic goods.

Actors like Mastercard and Western Union – by diversifying access to financial services – are able to capitalise on financial transactions by providing cheaper rates for remittances in the name of smart city development. The same report goes on to highlight that Equity Bank holds 15,000 refugee accounts in their Kakuma branch and most remittances are either received through Western Union or hawala agents—needless to say, there is profit to be had if so-called passive aid recipients are transformed into entrepreneurs who are self-reliant actors.

The transformation of refugees into self-reliant entrepreneurs relies on the logic that these people are complex economic actors who need more diverse financial choices. Missing from this reasoning is the recognition that refugees receive little global attention and constantly face reductions in essential services pushing them to precarious forms of income-generation in order to survive. Interventions by private sector actors fall into age-old neoliberal adages of efficiency, accountability, and freedom of choice. State and international human rights actors such as United Nations High Commissioner for Refugees (UNHCR) and the Kenyan government, in the face of global austerity, are more than happy to have private actors step-in and takeover responsibility for refugee survival.

In contrast, the threats of closure, particularly in Dadaab, have not disappeared and the camp sizes are slowly shrinking. In 2011, Dadaab’s population was 421,000 and this number has been reduced to 230,000 in 2018. While Kakuma represents an experimental avenue for profit, Dadaab – home to predominantly Somali refugees – is framed by the Kenyan government as an unaffordable space both in terms of the security threat and financial burden. The return of Somalis, through their scapegoating as terrorists, is justified on a national level in order to quell social disruption. 36.8 percent of Kenya’s population lives on $1.90 USD a day placing Kenya 8th on the list of top 10 African countries experiencing extreme poverty.

There are apparent tensions regarding refugee hosting. Many of the participants interviewed for my research suggest that the Kenyan government supports encampment because it absolves itself from welfare responsibilities. Looking at this more broadly, it was the forces of structural adjustment in the 1990s that coincided with refugee encampment that prevented the Kenyan state from developing long-term welfare capabilities in the first place.

Nevertheless, the new Comprehensive Refugee Programme (CRP) highlights that refugees should have adequate avenues for job creation, entrepreneurship, and integration in camps and urban settlements. This is a key divergence from previous strategies of encampment – refugees are now a new experimental population who must harness the force of the market.

While self-reliance is the policy du jour, the militaristic arm of the state that seeks to prevent migration is also alive and well. Biometric Identity Management (BIM) through fingerprinting and iris scans are surveillance technologies indicative of state organisations (along with UNHCR) seeking to prevent new or circulatory migrants. For example, Somalis who are ‘voluntarily’ repatriated -as Sieff points out, just to relieve their own state of indebtedness in Dadaab – seek return to Kenya as Somalia remains unstable. BIM prevents this from occurring thus attempting to make repatriation permanent. Indeed, as one interview participant notes, if UNHCR and the government are claiming that refugees are able to return to Somalia, then – within this flawed logic – they can actually no longer accept Somali refugees. If they did, then Somalia would no longer be considered a safe country for return so both international and national actors are complicit in the violence that Somalis face in their struggle for survival.

Much attention is given to refugee survival in camps; however, with the constant threat of their closure, many refugees are permanently relocating to Nairobi and its surrounds – a move that is illegal without a permit. Since welfare programmes for urban refugees are virtually non-existent, these groups must rely on piecemeal forms of assistance from NGOs and their own communities in the form of cash grants, entrepreneurial training, and microfinance within the ambit of experimentation and self-reliance.

Self-reliance as a solution for assistance is hindered by xenophobia too. For example, many Somali refugees relocate to Eastleigh which has become an area targeted by the police in light of terrorist attacks in Nairobi. Somalis are unfairly rounded-up and sent back to camps or deported while other non-Somali refugees are left to  survive in Nairobi in the informal sector. A participant from a government department noted in my research that, ‘If a refugee wants to stay in Nairobi then they can fend for themselves…the camps are equipped to care for them so if they are in Nairobi it is by choice and they ideally should have a transit permit from the government.’ Self-reliance is thus inherent in the national attitudes towards refugees which simultaneously ignores the circumstances of violence, health issues, and poverty in refugee camps.

Since no welfare support systems exist, many NGOs offer some sort of business training and loan assistance programmes – another example of ‘disciplinary entrepreneurialism.’ In order to access these loans or grants, refugees must go through a training programme where they learn the necessary business skills to set-up shop. They must learn how to make a profit so that they can repay the loan, because these loans, in fact, are frequently used for other refugees in the context of shrinking services. NGOs also recognize that refugees are a flight risk for loans because the cash on hand is used for basic consumption needs – a key issue identified in the literature on microfinance.

In short, the usage of loans under the spirit of entrepreneurialism dovetails with the security-maximization arm of the state that prevents refugees from entering its territory. These strategies coincide with two central aspects of neoliberalism – austerity and accumulation. As the story goes, the Kenyan government along with international actors prevents refugees from entering the country. These refugees are framed as threats to state security and an unaffordable risk. In turn, refugees that already exist in camps are either sent back to their country of origin or transformed into entrepreneurs where the camp becomes a space of experimentation. Refugees in urban areas are also meant to become entrepreneurs in order to survive without any state-led assistance. Importantly, these strategies have little to no empirical evidence further pointing to the experimental nature of entrepreneurialism as a key strategy for survival upon relocation (for a greater exploration of these themes see my article here).

The Kenyan case reveals that exclusion and violence continue to facilitate capital accumulation while also preventing long-term refugee survival. The notion of experimentation, briefly sketched here, allows us to frame neoliberalism as an ambivalent process. Capital permeates these spaces of poverty and the logics of entrepreneurialism facilitate some form of accumulation either through debt or through micro-transactions in the form of remittances. Importantly, refugees in the development of so-called smart communities also produce data and this data can be used for the purposes of capital accumulation in other contexts.

Ali Bhagat is a Lecturer in the Department of Politics at the University of Manchester. He is currently working on his book manuscript Displacement in Racial Capitalism: Governing Refugees in Paris and Nairobi.