‘Bashir, to the Dustbin of History’ - ROAPE
19473
post-template-default,single,single-post,postid-19473,single-format-standard,ajax_fade,page_not_loaded,,qode-child-theme-ver-1.0.0,qode-theme-ver-16.8,qode-theme-bridge,qode_header_in_grid,wpb-js-composer js-comp-ver-5.5.2,vc_responsive

‘Bashir, to the Dustbin of History’

Home > Featured  > ‘Bashir, to the Dustbin of History’ 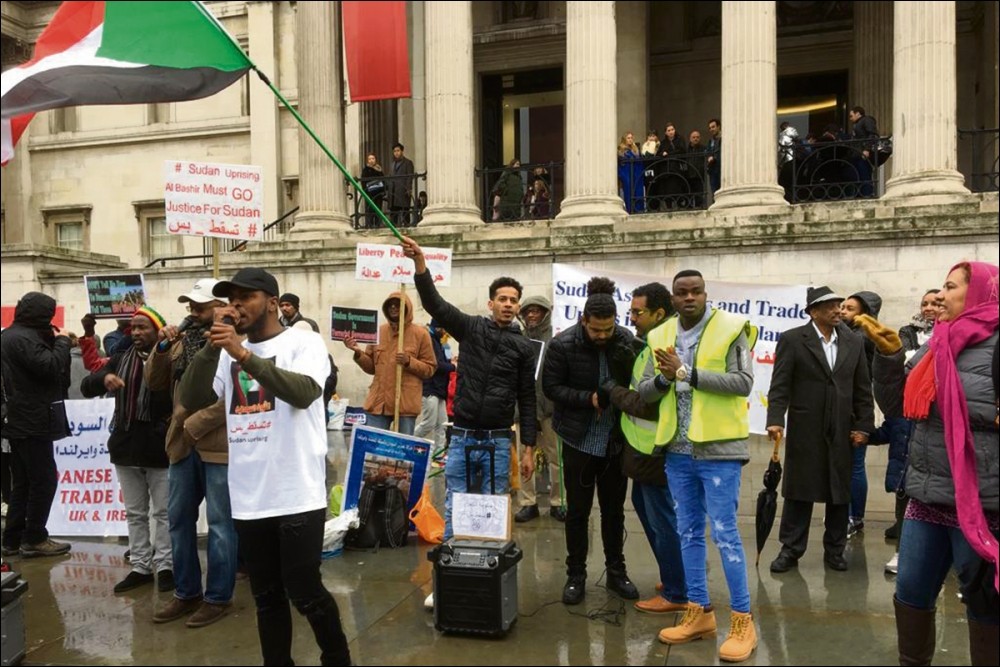 14 Mar ‘Bashir, to the Dustbin of History’

Posted at 12:42h in Featured, Interviews, Popular protest and class struggle across the continent by roape1974 1 Comment
0 Likes

‘Bashir, to the Dustbin of History’- an interview with Mohamed El-Nour

Sudanese activists in Europe continue to build solidarity for the revolutionary struggle that has, since mid-December, spread across Sudan. What are the dynamics of the uprising, and what is the role of the diaspora?

For roape.net, Joe Hayns translates and introduces an interview with Mohamed El-Nour, an activist with the ‘Sudanese Revolutionaries and their Supporters in Marseille’ collective.  El-Nour was interviewed by Oum Ziad for the Marseille-based, left-wing journal, CQFD.

In November 1851, nearly four years after the protests that began Europe’s ‘Springtime of Peoples’, Friedrich Engels wrote that ‘it is the fate of all revolutions that the union of different classes, which in some degree is always the necessary condition of any revolution, cannot subsist long’. Three months after the first Ṭasqut Bas! (Get Out!) protests against Omar al-Bashir and his regime, what can be said about the the ‘union of classes’ in Sudan?

Is the country more Tunisia, or Syria? Is the Sudanese Professionals’ Association (SPA) — the fledgling union federation, referred to indirectly in the interview below — able to cohere the popular classes against the state, as the General Union of Tunisian Workers did in 2011? Or, as Sudanese radical Magdi el-Gizouli recently asked, will the SPA continue to develop apart from the very ‘small farmers and non-professional workers’ who initiated the protests — is the revolution too ‘early’ for a progressive bloc to develop?[1]

Against them both, is al-Bashir a Bashir al-Assad, or a Ben Ali — able or not to superintend an anti-revolutionary bloc? And how can the left outside the country and the region come to understand revolutionary Sudan, except by analogy?

There is a clear answer to at least the latter question. Whilst detailed news of Khartoum remains scant in the press, Saturday 2 March saw, in Brussels, the largest demonstration yet of Europe-based Sudanese organisations; and, in London, groups directly connected with the SPA continue to organise weekly protests (in Trafalgar Square, from 2pm). Such activities, and the following interview, show again that it is more through diasporas than international editors that the left in Europe can rebuild both its internationalism, and its comprehension of today’s ‘Springs’.

Oum Ziad: How is the popular revolution organising itself?

Mohamed el-Nour: Since 19 December, spontaneous assemblies have taken place across the majority of the major towns and cities in Sudan, especially after Friday prayers, and even after football matches, as in Omdurman, as organised by supporters of the al-Hilal club.

On 25 December, unions called for a march on the Presidential Palace in Khartoum. The following Friday — ‘the Friday of Anger’ — journalists, doctors, and lecturers called for a strike. There was no political party amongst these mobilisations. The student collectives, who have been very active on the marches, have mobilised without displaying signs of party membership.

Only the Sudanese flag, the national anthem, and popular chants have marked the protests: ‘Liberty, Peace and Justice’, ‘Revolution is the Choice of the People’, or ‘The People Demand the Fall of the Regime’. Out of fear, Bashir closed the universities on 22 December, but that didn’t prevent the students from revolting.

There have been many expressions of oppositional support and fraternisations from the military, but the Sudanese don’t have any confidence in any mediating body, in parties or unions. Sadiq al-Mahdi, former Prime Minister of al-Bashir, is already pretending in the international media to embody the opposition — but one of his sons is currently adviser to Bashir himself, and, at the start of the revolution, al-Mahdi signed yet another [intra-Sudan] peace accord, in Germany. Forty-three such peace accords have been signed since 2003, and have done nothing other than distract international attention from the continuous massacres in Darfur and the Nuba Mountains. These acteurs de la paix (actors of peace) are, in fact, acteurs du pouvoir (actors of power).

Can we speak of a Sudanese Spring?

The majority of the media, when they have spoken about Sudan, have begun with evoking ‘bread riots’, but this is only denying the revolutionary aspect of the uprising.

Sudan was the first country in Africa and the Middle East to have a revolution, in 1885, against Anglo-Egyptian domination. Since independence, there have been two revolutions: in 1965, after pressure from the streets, the President Ibrahim Abboud duly left power; in 1985, the removal of the military government of Jaafar al-Nimeiry aimed for the restoration of civil government — before the coup d’état of Omar al-Bashir in 1989.

As the Arab Spring arose, we were ecstatic at the images of Tahrir Square. The history of the people of Sudan is connected to the Egyptian people. Today, many Sudanese activists are refugees in Egypt, even whilst the Egyptian authorities cooperate — punctually — to deliver opponents of the regime to Niss [National Intelligence and Security Service, the Sudanese security service]. In July 2013, al-Sisi’s coup and the return of the ‘ideology of the gun’ in Egypt served as a warning — and we don’t want to give an opportunity to partisans of a violent coup. That’s why the Sudanese protests are non-partisan and unarmed.

The popular revolution raged in the northern towns, before spreading to other regions — but the rebel groups in Darfur, Kordofan, and the Nuba Mountains remain, for the moment, quiet.

The northern cities are the heirs of Sudanese independence [i.e., fought for and received the benefits of independence]. In Omdurman, the sibling city of the Khartoum, on the opposite bank of the Nile, the demonstrations are daily. This town was built by those so-called ‘African’ elites opposed to the colonial power, and has for a longtime harboured rebels such as al-Mahdi — mystic heroes of the struggle for independence.

Whilst the popular uprising started in the northern cities, it spread rapidly to Darfur, above all to Nyala and al-Fasher, whose residents are under the repressive whip of Mohamed Hamdan Dagalo, nicknamed ‘Hemetti’, former head of the Janjawid forces, and a warlord who has been recycled through the government’s paramilitary forces. Darfur, despite the ceasefire, has been exhausted by the various sequels to the war of 2003.

I’m originally from al-Geneina, the Darfuri town on the Chad border. My village was burned to the ground when I was fourteen years old. In 2013, the rebel groups of Darfur called for support for the revolution that exploded in Kassala. Today, they’re being more discrete, in order to not be accused of manipulating the revolution.

On what is al-Bashir basing his power?

Bashir’s coup was supported by the Islamist ideologues like Hassan al-Turabi.[2] After replacing al-Turabi, Bashir continued to rely on rigorist Islam. On the 8 January this year, in a televised speech, Bashir again referred to a ḥadīth [a report of a saying or act of Mohamed], in declaring that the soldiers firing on protests is ḥalāl — that it is permitted. This was too much for certain religious figures, who immediately contradicted Bashir’s fantastical interpretation, and took the side of the protesters.

Sudan is in the process of changing, driven by a new generation — educated, and diverse. One of our demands is the equality between men and women. Lots of Sudanese women have been part of the protests; they are also the target of repression.

For sure, the second pillar of power is the security apparatus, which monopolises the state budget. Since 19 December, there have been 40 deaths and more than 1000 arrests. On 9 January, after protests in Omdurman, dozens of wounded were being cared for in the major hospital — where Bashir’s men opened fire. At the same time, in Khartoum, at the Green Square, the dictator launched his campaign for the 2020 presidential election, at which the crowds obligingly applauded.

The same scenario, a massacre, was repeated on 16 January, at the Royal Care International hospital in Khartoum. Many doctors have been killed or arrested when supporting the demonstrators. Then, people occupied the hospital in protest.

We treat announcements of defections from the army with suspicion, since some of the them are simply waiting opportunistically for the fall of the tyrant, like Salah Ghosh, the Director of the Secret Services.

How is one a revolutionary in exile?

The exilés play a crucial role against censorship, and in the coordination of information. The Revolutionary Sudanese of Marseilles allows us to build concrete solidarity between ourselves, and also to alert the international community. It was the online mobilisation that gave us the hashtag #TuTombes, which alludes to the overthrowing of Bashir. In Sudan revolutionaries connect with virtual IPs, in order to send us information. We have been forced to take this action because of the closing of borders in Africa — many millions of Euros have been sent by the EU to the regime, as part of the Khartoum Process, an agreement about the externalisation of European borders — and by the incessant repression of the Other, and sometimes by the collaboration between European and Sudanese authorities over the expulsion of sans-papiers [those ‘without papers’, living ‘illegally’ in France and Europe] and opponents of the regime.

Despite this, for me, Sudan’s future is also being forged in Europe, since it remains a site of Sudanese power. In three years, we’ve created Sudanese assemblies in nearly every town in France. We’re here to change history — it’s one of our slogans, ‘Bashir, to the Dustbin of History’.

Joe Hayns is an activist and member of UK-based group rs21. He is a doctoral researcher working on Morocco.

ROAPE is grateful to the radical French monthly CQFD for permission to edit and republish this interview.

[1] See el-Gizouli’s bilingual blog, StillSudan. The quotation is from the short essay – follow the hyperlink in the interview above for the Arabic essay – ‘On a Revolution Unprecedented and Controversial: What to do with the Sudanese Professionals’ Association?’ (‘للثورة جِدّة وجدل: ماذا نفعل بتجمع المهنيين؟’).

[2]  For a 1994 profile of al-Turabi, see Judith Miller’s Foreign Affairs article ‘Faces of Fundamentalism’; for a more recent sketch, see Rob Crilly’s 2010 Saving Darfur: Everyone’s Favourite African War. In 2011, al-Turabi told AFP that ‘(w)hat happened in Tunisia is a reminder. This is likely to happen in Sudan (…) If it doesn’t, then there will be a lot of bloodshed. The whole country is armed. In the towns, it will be a popular uprising, but in Darfur, and in Kordofan as well, they have weapons.’